The shortlist represents what would be the first examples of American modern architecture to be marked for preservation by UNESCO.

From the Statute of Liberty to the ruins of the Chaco Culture, the United Staes has fewer than two dozen landmarks designated as UNESCO World Heritage sites. Now, ten of Frank Lloyd Wright’s buildings—built from 1906 to 1969—are the first modern works of American architecture to be considered for a global list, which already includes Walter Gropius’s early Modernist Fagus Factory, Josef Hoffmann’s secessionist Stoclet House, and a host of cultural landmarks from Angkor Wat to Stonehenge. The UNESCO designation neither outlines nor provides any specific protections or provisions for the preservation of the buildings, but would formally elevate them to an international standing. The nomination was forwarded by the Frank Lloyd Wright Building Conservancy, a Chicago-based nonprofit dedicated to preserving Wright’s built legacy. The next steps are site visits by the World Heritage Committee throughout 2015 and possible inclusion by summer 2016. 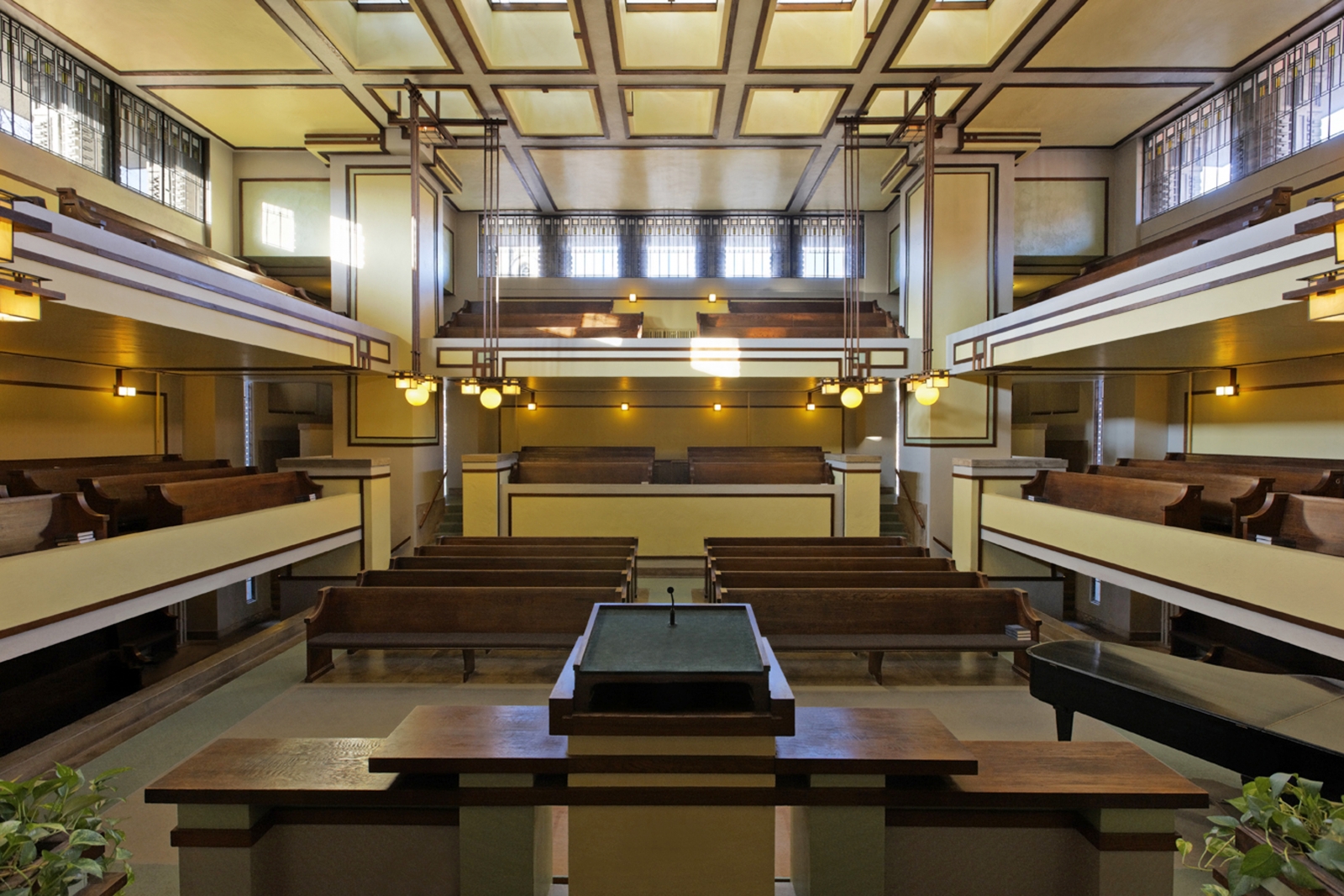 Not only is Unity Park Wright’s sole remaining public building in his Prairie Style, it’s also one of the earliest examples of exposed reinforced concrete in a non-industrial building. The building exterior presents a solid cubic mass, while the interior is a richly decorated in sand-colored plaster and oak, culminating in a large top-lit worship space and auditorium. 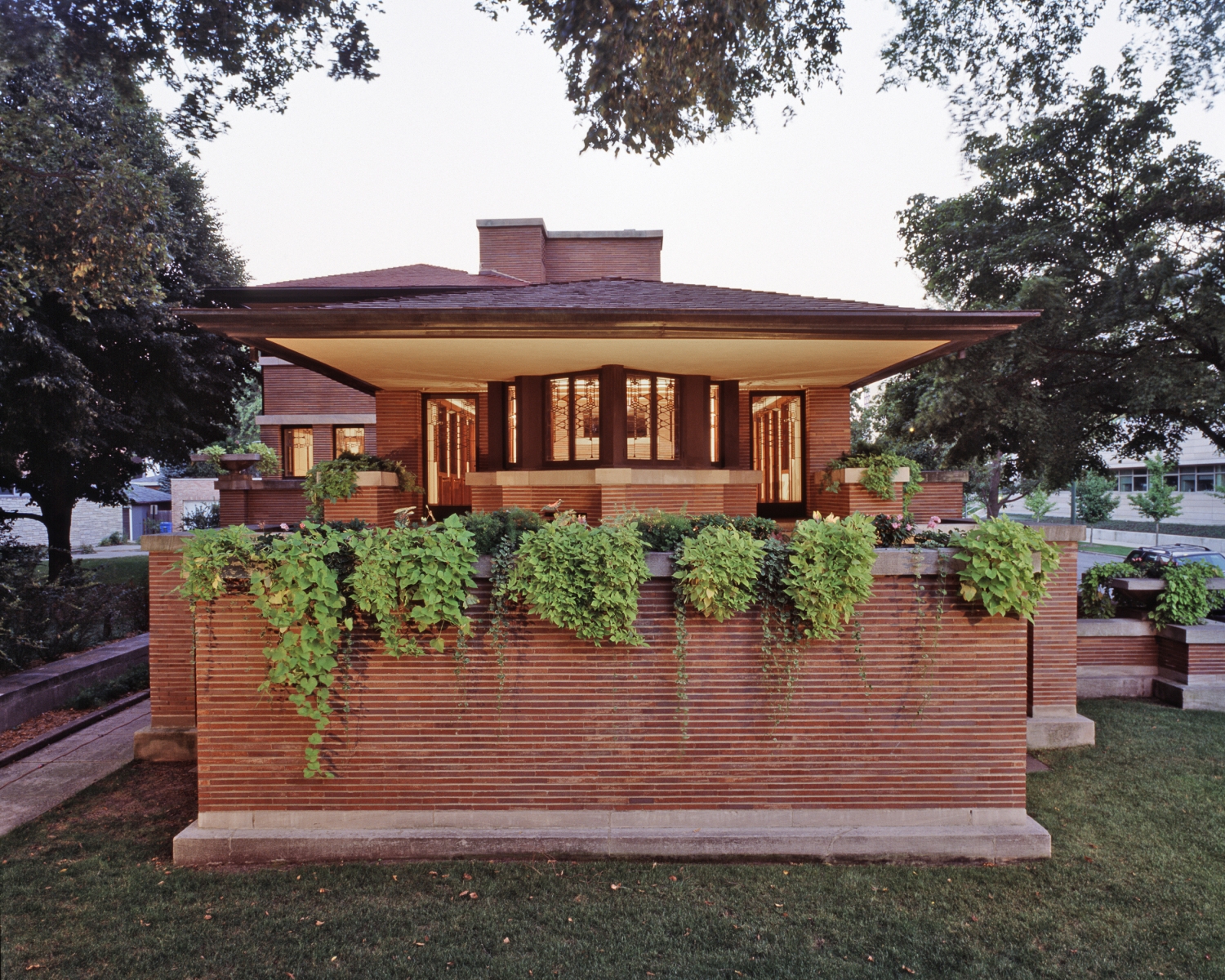 The Robie House is also an exemplar of the Prairie Style, displaying a squat form and horizontal lines to reference the Midwestern landscape. Its continuous, open living and dining rooms—as well as its use of walls as non-structural planes to define space—were distinctly modern and revolutionary at the time. 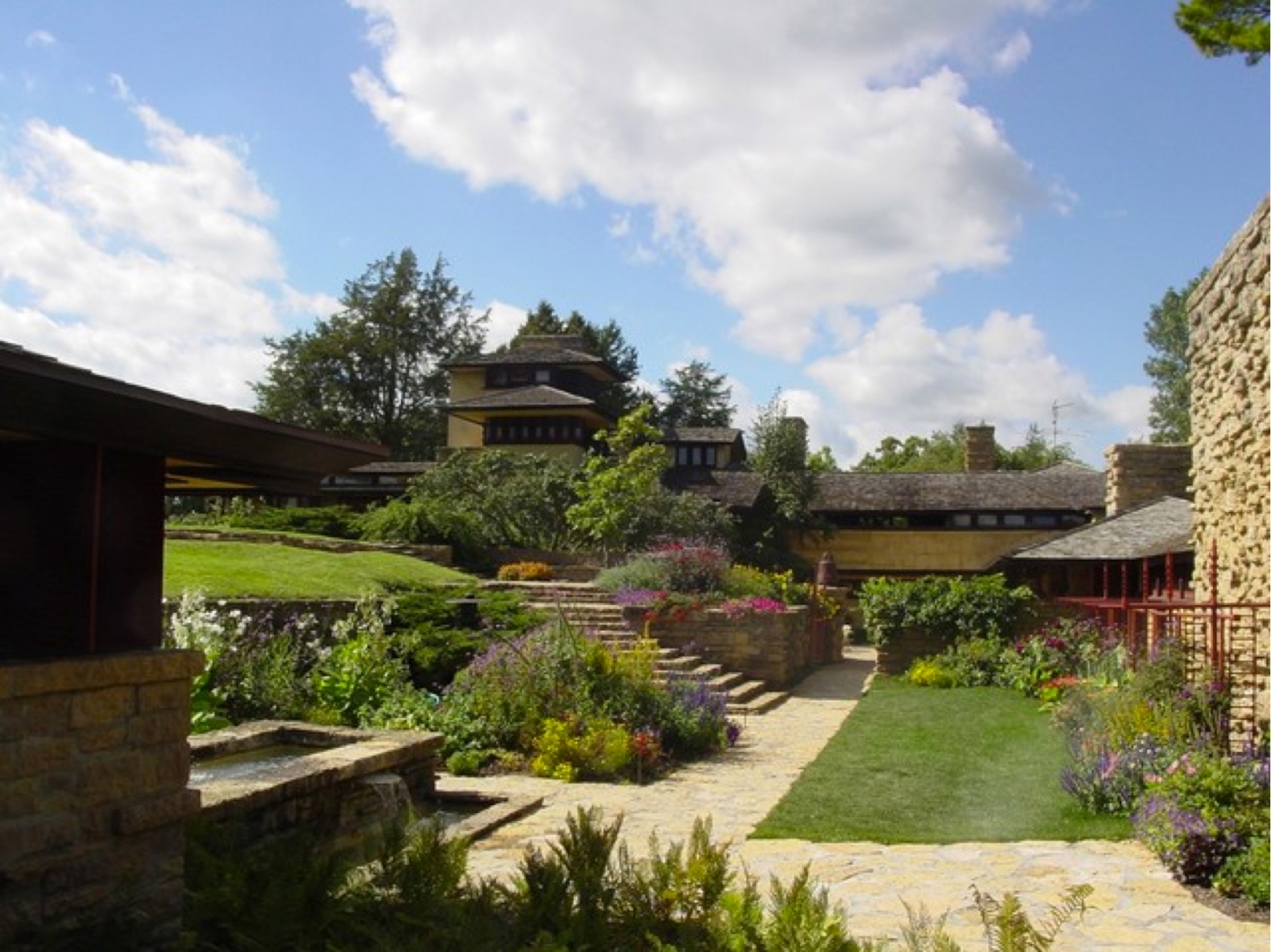 Taliesin, view looking southwest and view to the northeast across living room.

Composed of local materials and carefully inserted into the landscape, Taliesen served as Wright’s home and studio as it expanded and evolved over 50 years. Still in use as a center of architectural education, many of Taliesin’s rooms are entered from the corner, creating uniquely diagonal sight lines that pass through long bands of windows to emphasize the dramatic landscape. 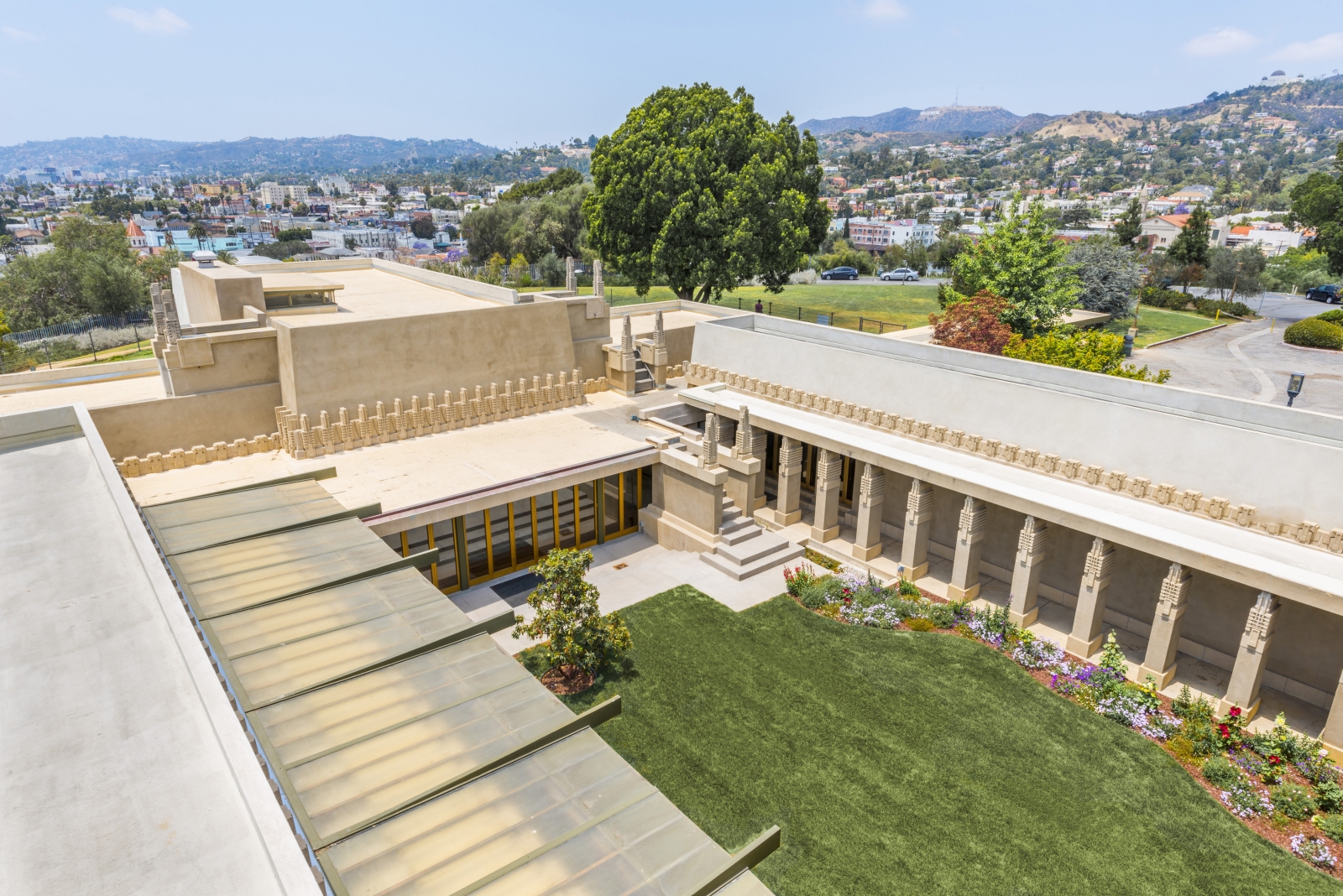 Commissioned by a wealthy heiress, the Hollyhock House was intended to be a center of avant-garde theater. It was Wright’s first commission in Southern California and its concrete construction features ornament and sculpture inspired by the art of the Spanish and Pre-Columbian southwest. The building and surrounding parkland will soon reopen to the public after an extensive renovation.

Regarded by many as Wright’s most masterful integration of architecture and landscape, the house is a spectacular feat of construction. The structure’s three reinforced concrete levels cantilever over a waterfall, and utilize glass, stone, and wood to blend into the surrounding forest. The residence is now a museum. 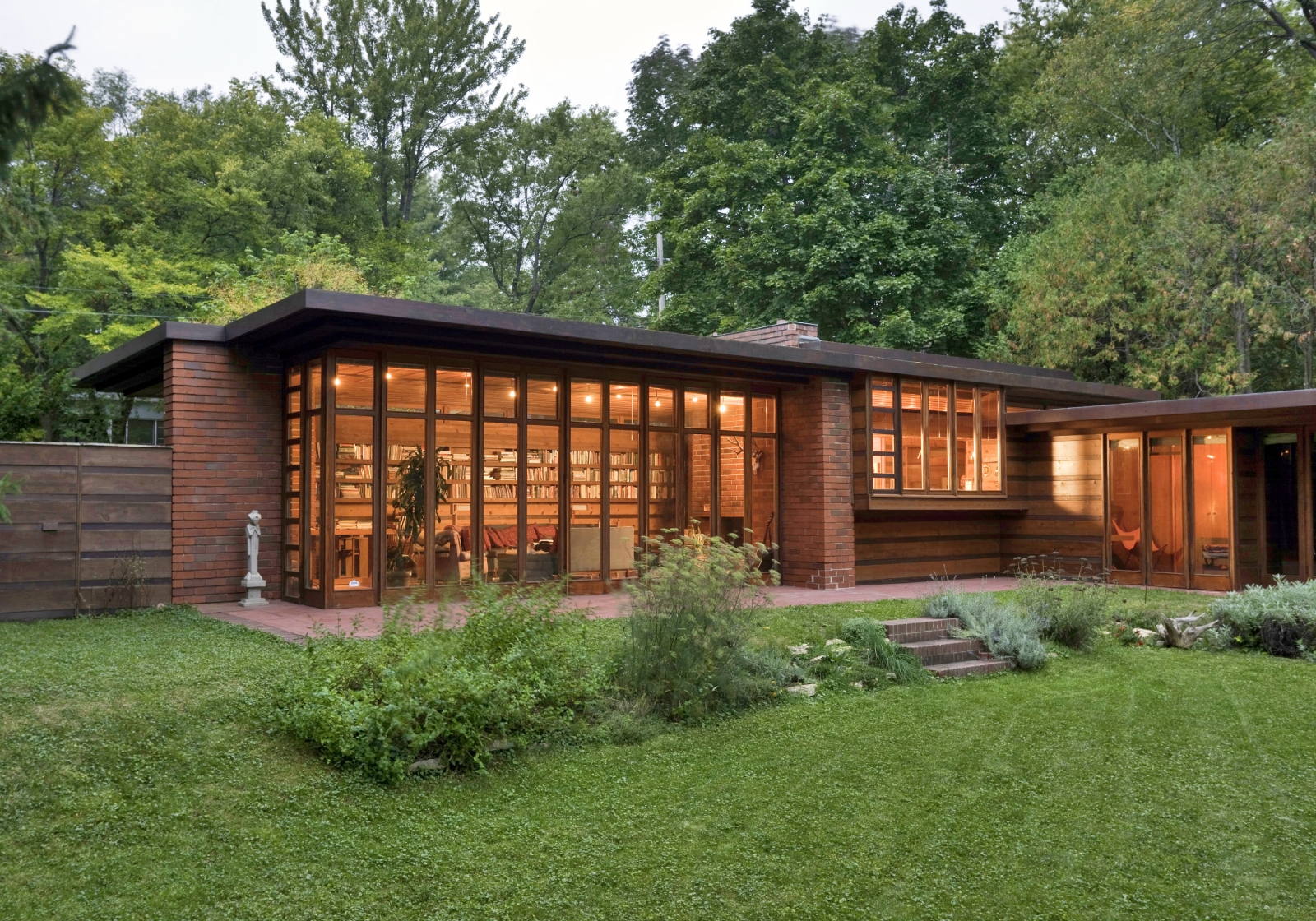 The Jacobs house was designed and built for a couple of modest means and exemplifies Wright’s response to the scarcity of the Great Depression as well as his vision of suburban America. In a typical Wright fashion, its L-shaped design opens its rooms to the landscape around it, while its construction details are astonishingly simple and economical. The house is still a private residence and open to tours by appointment. 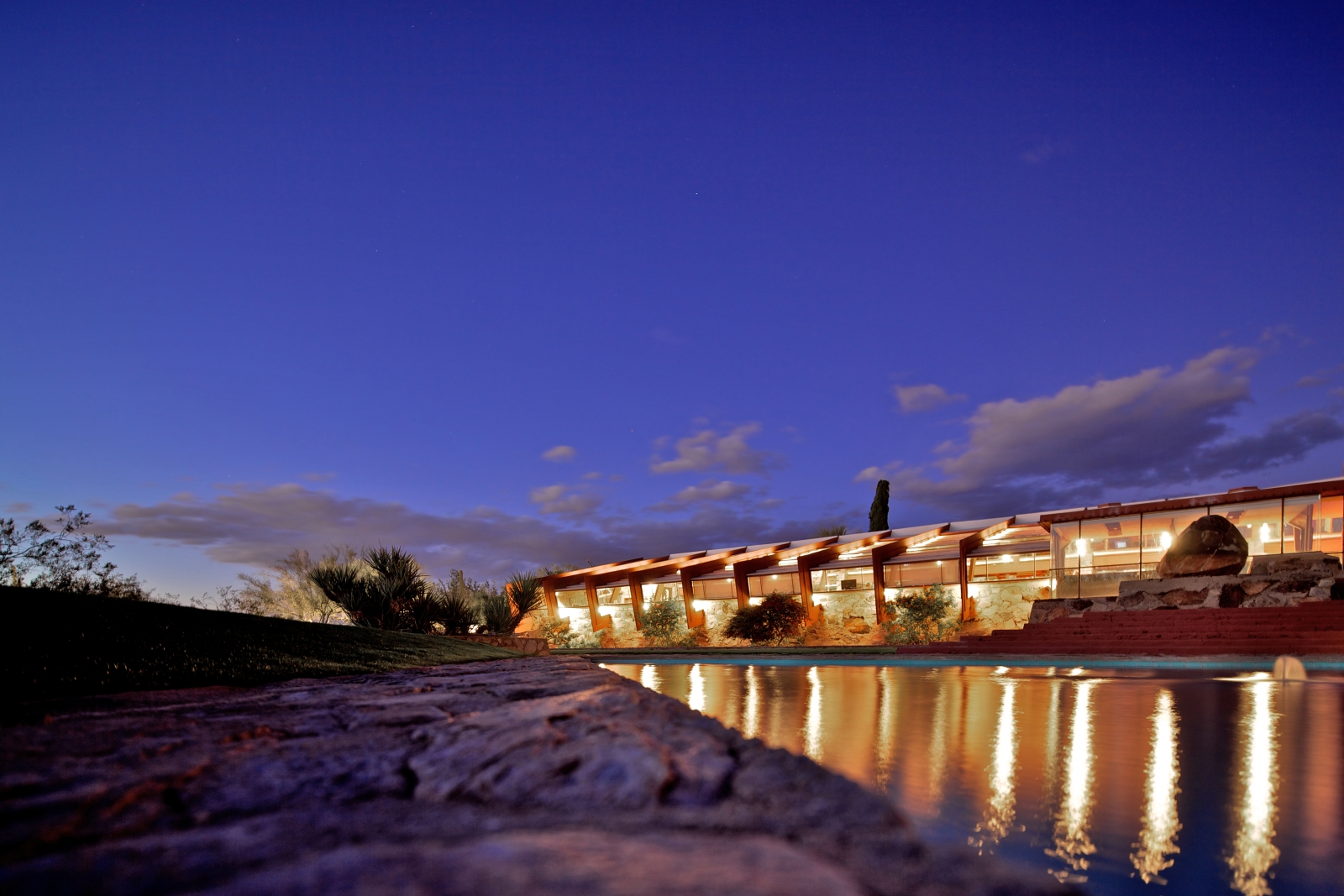 Wright’s home and studio during the last 20 years of his life, Taliesin West uses a mix of masonry and modern construction techniques to adapt to its desert surroundings. Its collection of dramatic angular spaces currently houses the Frank Lloyd Wright Foundation and the Frank Lloyd Wright School of Architecture, among other educational and architectural functions. 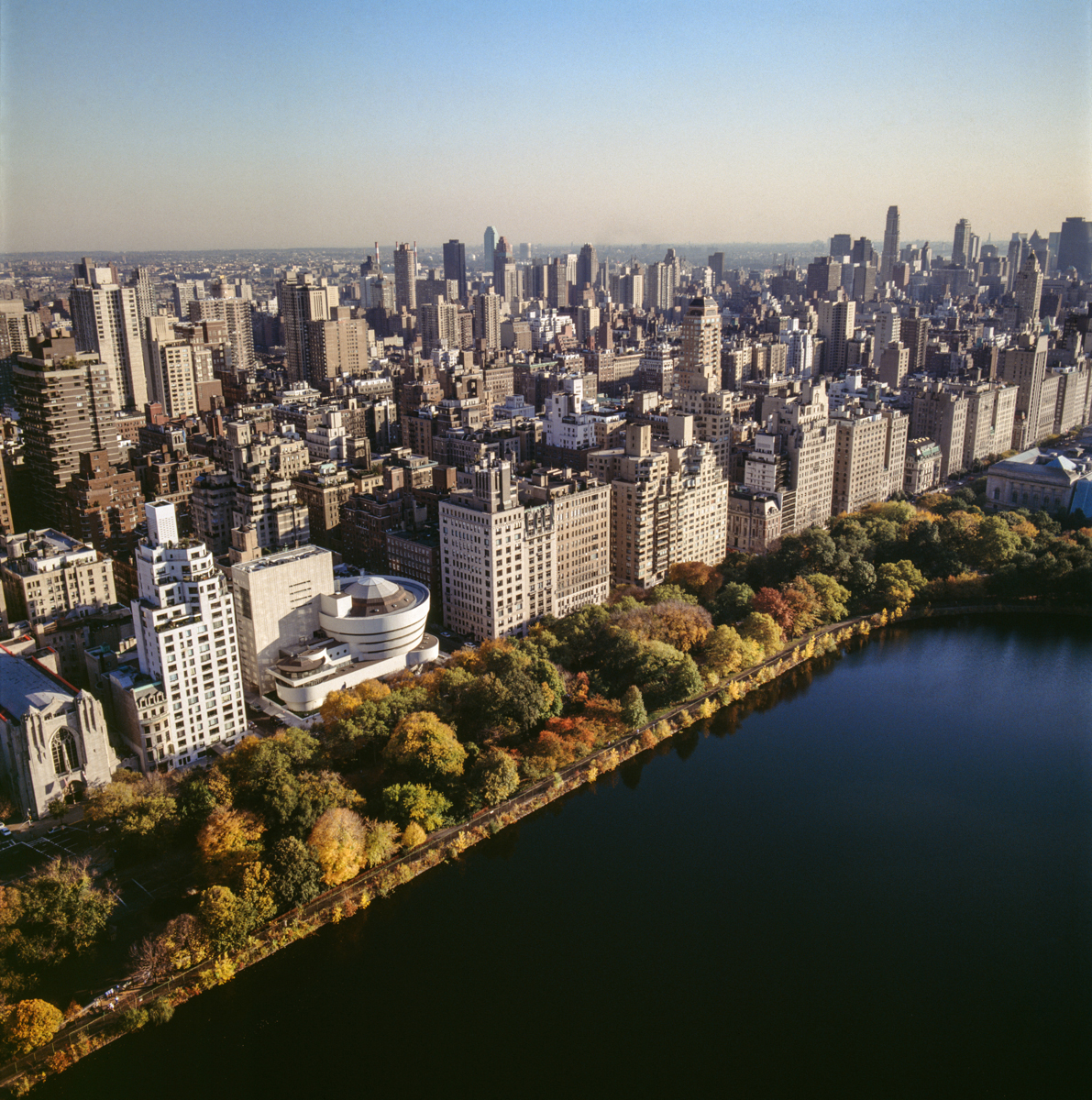 Completed in 1959, the Guggenheim is a global icon that receives more than one million annual visitors. Its unique spiral ramp, top lit by a glass dome, is a highly sculptural architecture that dramatically shapes how the museum’s art is experienced. The museum has undergone a major addition and some modifications, but its original architecture remains intact.

This commercial and residential-use tower features 19 floors that cantilever outwards from a central core—the tower is Wright’s only built freestanding skyscraper. With its unique construction and painted copper cladding, the Price Tower dramatically sets itself apart from the minimalist glass and steel towers of 50s and 60s High Modernism. It’s currently home to an arts center, hotel, museum, and offices. 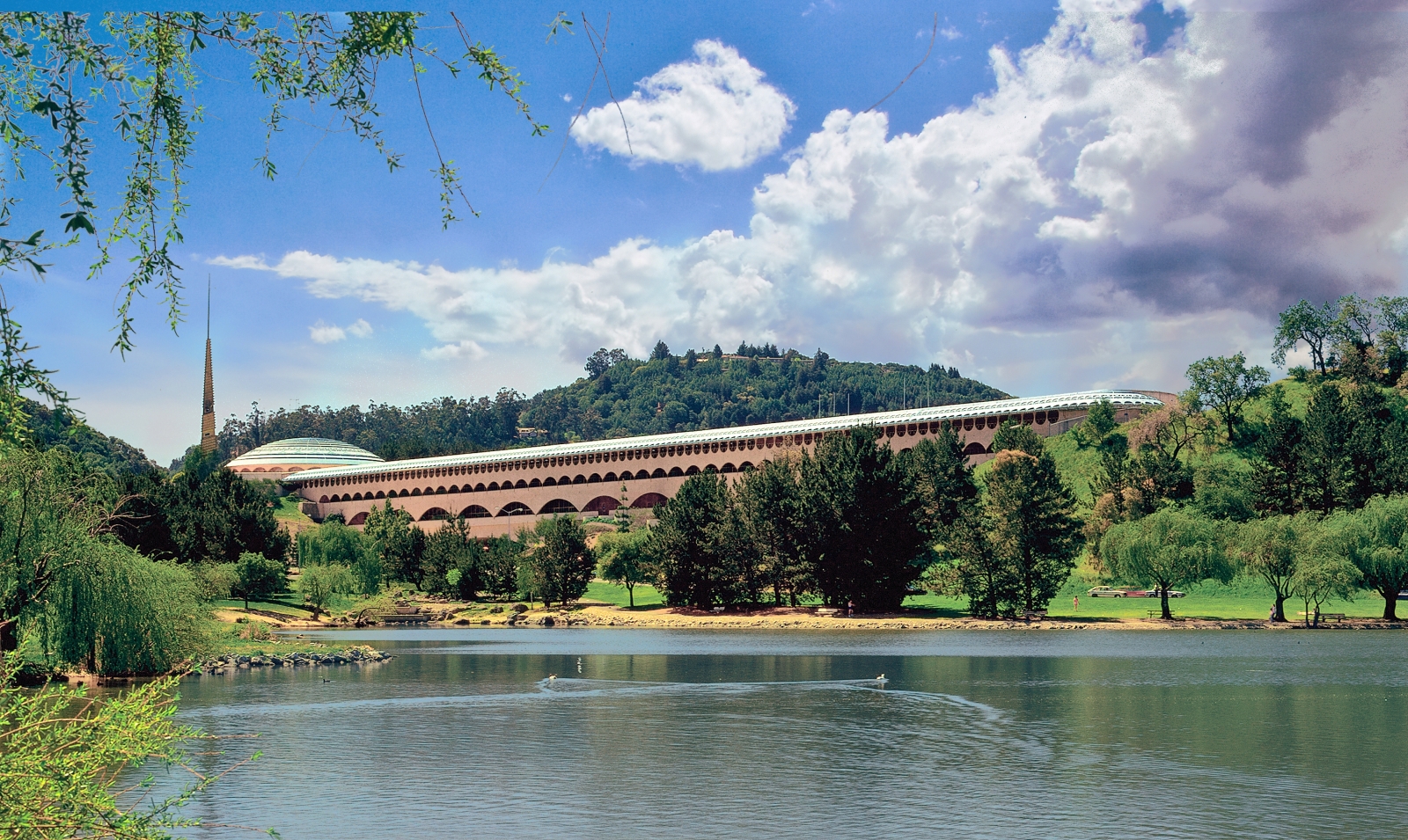 Wright’s only government project and last major work, the Civic Center jumps across the crests of three hills. It still houses governmental and cultural programs within a single building adorned with non-structural arches that decrease in size as they ascend. The interior holds a single lengthy sky-lit galleria and the exterior’s coloring and massing deftly integrate into the landscape.