How does our experience of sound affect the way we perceive and experience space? This fundamental question is imaginatively reframed in London-based sound artist and designer Yuri Suzuki’s latest installation, the Acoustic Pavilion. Developed for the Biennale Internationale Design in Saint-Etienne, France, the project riffs off the festival’s general theme, Experiences of Beauty, through an immersive and interactive soundscape, whose impact is amplified by the spectacular setting—Le Corbusier’s posthumously completed Église Saint-Pierre, located in the nearby town of Firminy.

Installed in the exhibition space of the church (now officially a cultural center), Suzuki’s lo-fi pavilion invites visitors to create their own spindly structures. Using varyingly dimensioned ABS pipes and little else, participants can create clusters of the DIY instruments. As the shape and size of the networks are altered, the sounds emitted by the pipes change, corresponding to the playful aesthetic combinations of the Fisher-Price-like building materials. The horn-shaped caps are painted red, yellow, green, and blue, reflecting the primary colors that punctuate the church’s interior. “The colors are important, beyond being a direct reference to the ones Le Corbusier chose, they also treat light as a composition of sound,” says Suzuki, who was selected as one of Metropolis’s New Talents in October. 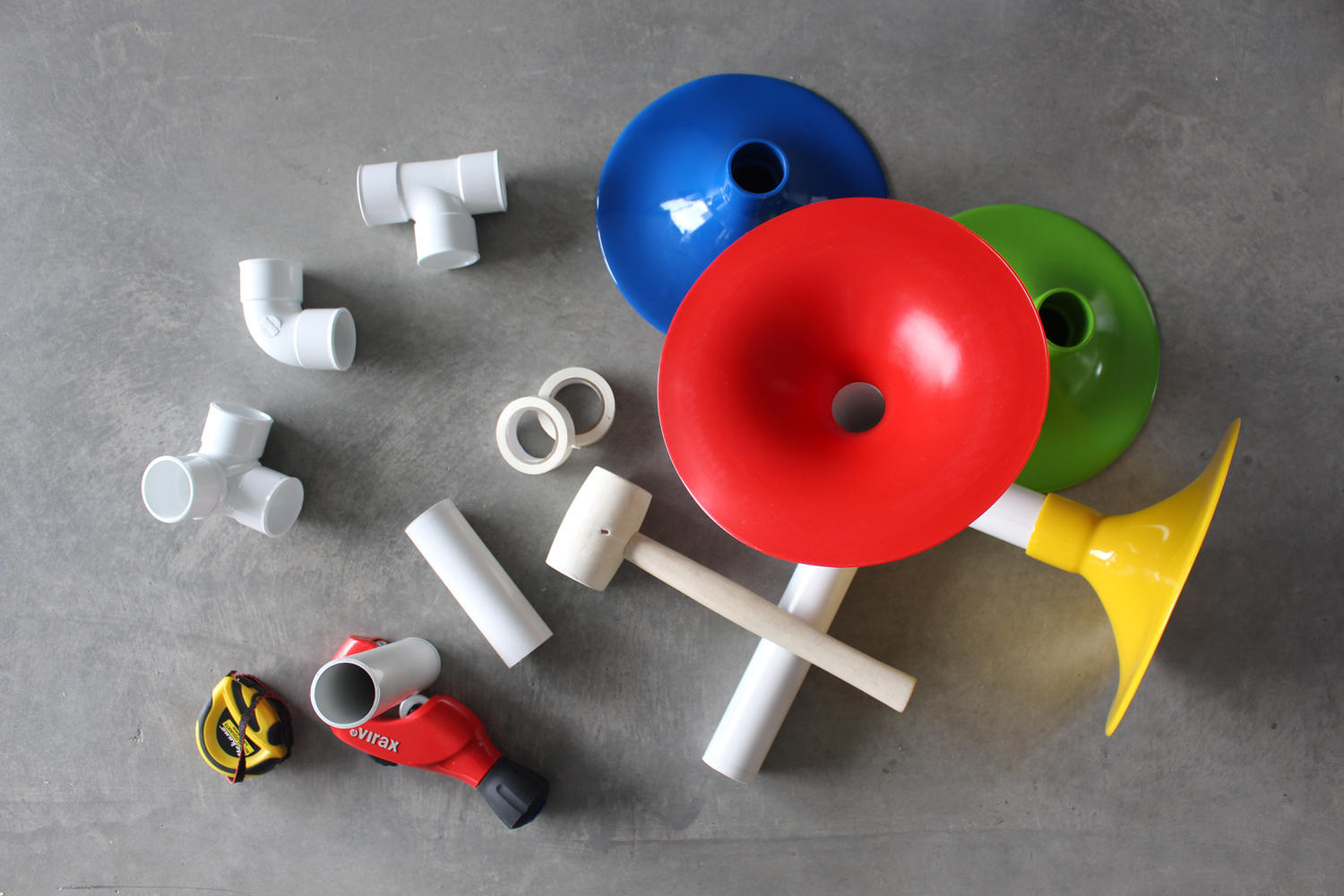 The site-specific installation engages ideas explored by Le Corbusier in his late architecture, which often incorporated overtly musical elements. “The design came out of a personal interest in the collaboration between Le Corbusier and Iannis Xenakis. During their period of close collaboration, they tried to treat architecture as a platform for music, or as a listening machine,” says Suzuki. “Most significantly was the Philips Pavilion for the 1958 Brussels World Exhibition,” Suzuki adds, “where Xenakis’ musical composition itself became an architecture.”

While Xenakis had no hand in the church’s design—begun in the early 1960s after his departure from Le Corbusier’s office—there are musical overtones in the design of the Église Saint-Pierre that Suzuki wanted to highlight. “The all-concrete, curved structure creates a beautiful reverberating sound, and I wanted to make people realize the beauty of sound in architecture.” 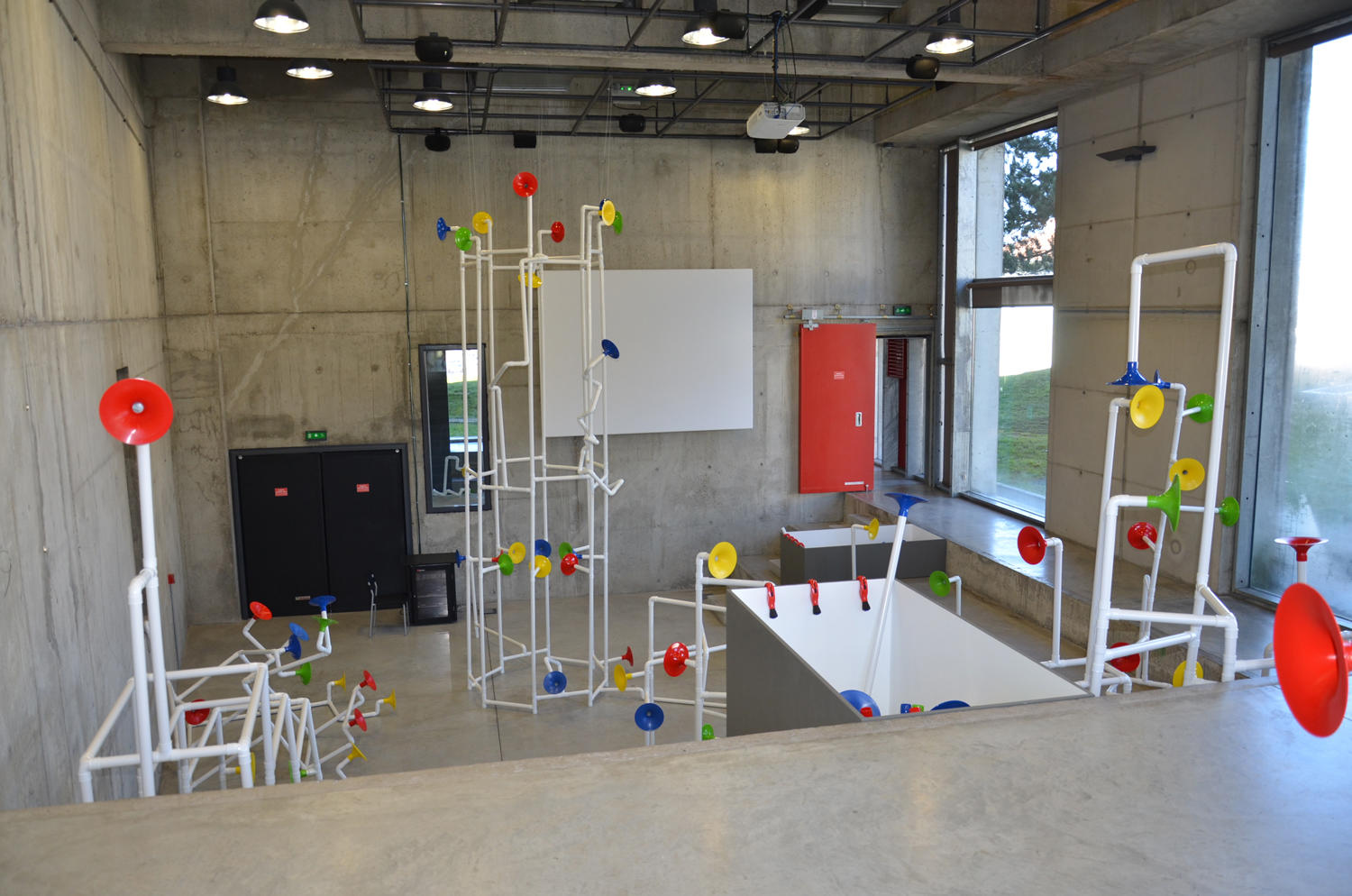 The structures can take many forms, each one producing different compositions of sound.

In preparation for the project, Suzuki and his team spent time walking around Firminy, an erstwhile mining town where Le Corbusier also built a cultural center, sports arena, and a housing block (a variation on the Unité d’Habitation in Marseilles). Their close encounters with the complex of buildings—the densest collection of Le Corbusier structures outside of Chandigarh—revealed “many fragments, like the Cultural Center’s windows, which express ideas about rhythm and music,” Suzuki explains. “Many of the window details in the church tend to make a musical impression. There is even a window that appears to be a piano shape.”

Compared to the robust concrete of Le Corbusier’s church, Suzuki’s intervention is downright skeletal. The bare bones approach is new for Suzuki and signals a change in his practice, he says. “This was the first time I did a non-technical project. Typically, I use a lot of technologies with components of electronics, kinetics, and robotics. This time, the focus was on architecture and structure, with the goal of creating a platform through which anyone could participate.” 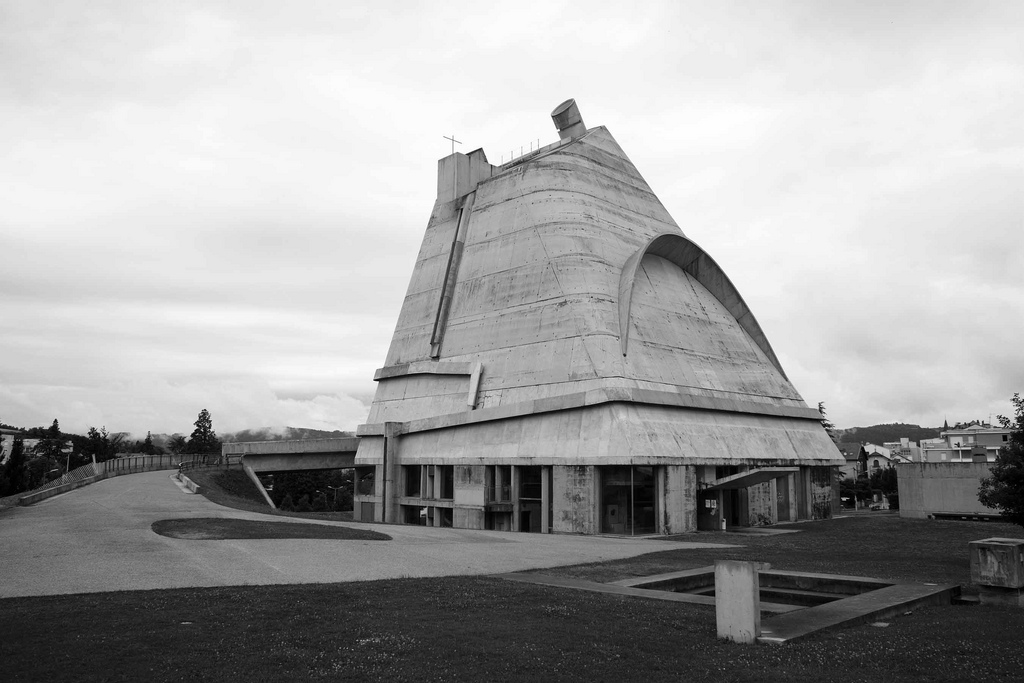 Le Corbusier’s church is part of a complex of buildings the architect built in the former mining town of Firminy, which neighbors Saint-Etienne, the home of the Biennale Internationale Design. Construction on the church commenced in 1971 before being stalled and not to be taken up again until the new millennium. Under the supervision of former Le Corbusier apprentice and employee José Oubrerie, the project was completed and opened in 2006.