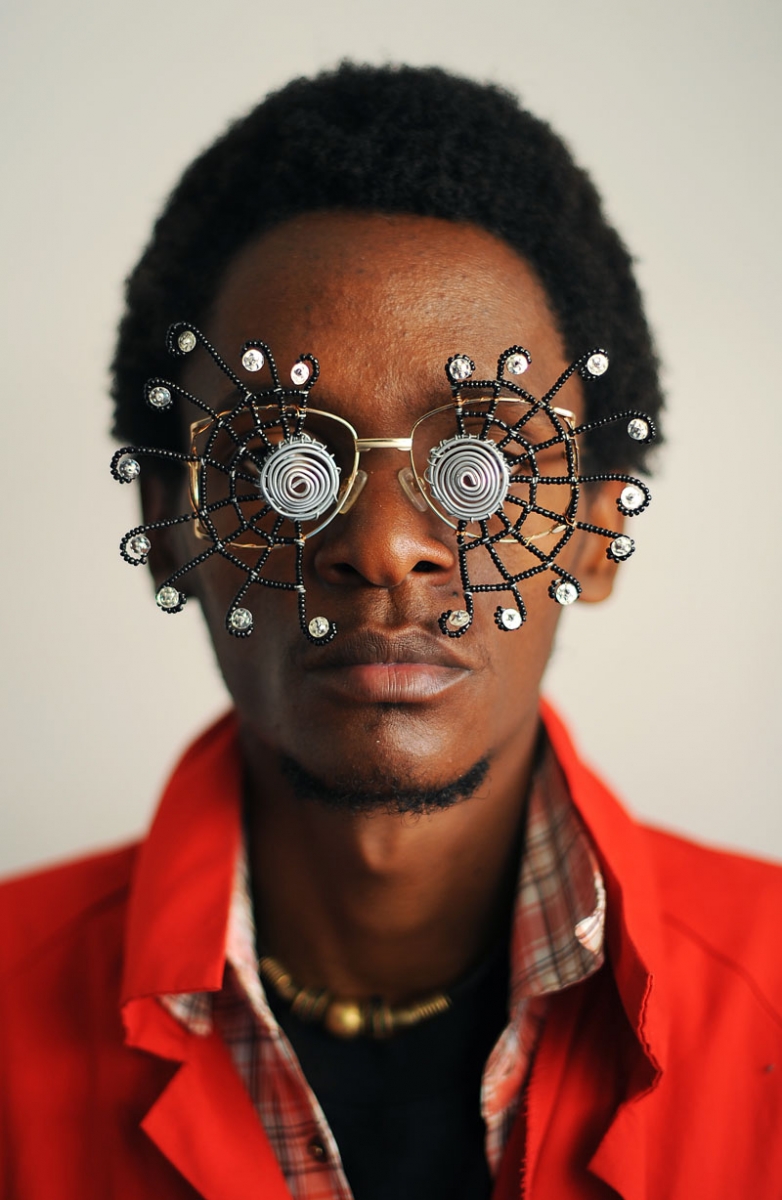 The 2012 C-Stunners series of spectacles by Kenyan artist Cyrus Kabiru are among the centerpieces of the exhibition, which runs through September 13.

On view at the Vitra Design Museum in Weil am Rhein, Germany, Making Africa: A Continent of Contemporary Design is a comprehensive survey, featuring the work of more than 120 artists and designers working in many mediums and at all scales. In this edited excerpt from her essay for the catalog, the show’s curator, Amelie Klein, lists 10 ways in which creativity on the continent reflects and suggests global shifts in design practice.

Making Africa offers a new history of African design, a narrative that quite possibly has not yet been heard. It’s one possibility among many for seeing this continent—a suggestion, a hypothesis. This approach emerged in the course of hundreds of discussions, which the Vitra Design Museum conducted over a period of some 18 months with theorists and practitioners from across the entire continent and beyond. We were supported and advised in all of this by a 14-member expert advisory board—among them Okwui Enwezor, the curator of the 56th Venice Biennale.

Enwezor provides a new definition for the verb to make. “We must understand the political dimension of making,” he said in an interview for this exhibition. “Making as a kind of subversive act, as the exploring of new attitudes, concepts, and industries.” The act of making something, and thus to physically produce, to build, Enwezor contends, is elemental, since it questions the concept of industrial mass production. This is not something that should be misunderstood or seen as an alternative born out of hard necessity, especially in times like these, when Africa is being flooded with mass-produced cheap goods. “We must think again about concepts such as recycling, remodeling, impoverishment, or informality, in order to be able to transfer them usefully into the present and to help us overcome the image we have of all the deficits that we associate quite generally with Africa.”

The potential of this statement, not only for Africa but for design in general, is overwhelming. Design has been in the pay of the market economy for far too long, and it is high time for us to learn to think along new lines. As we encounter the social, political, economic, and technological upheavals that are lined up ahead of us, it is no longer enough to produce a new chair or design a pretty poster. One can see this quite clearly in Africa, where design is both an expression of social change and is itself changing society. 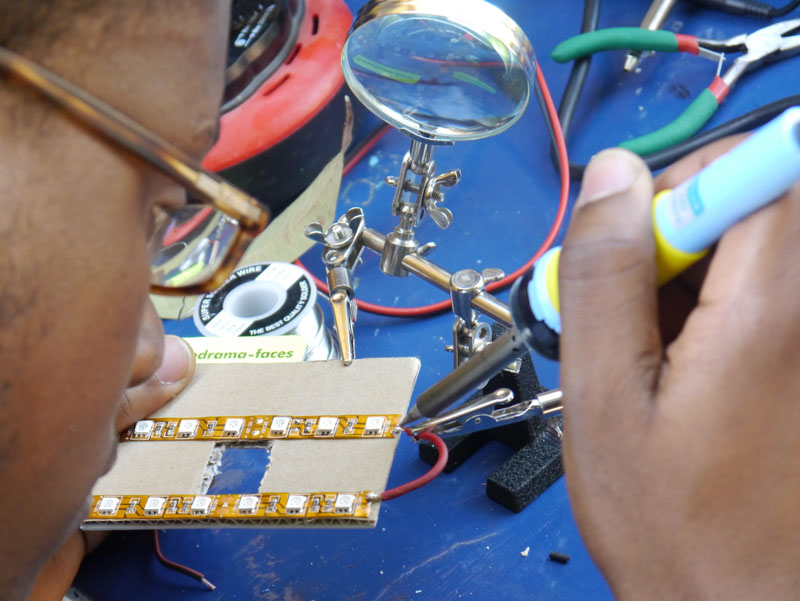 Defko Ak Ñiëp is a FabLab in Dakar—a workshop that offers low-cost, open-source digital technologies so that community entrepreneurs and artisans can quickly prototype and share their ideas.

“All forms of oppression are connected!” is a graffiti slogan that can be seen in the office of the activist and artist Jim Chuchu in Nairobi. The graffiti presents a complex reality in simple form, one that confronts us all. The successful ones are those who can react flexibly. The first thing one notices when confronted with creativity in Africa is how very interdisciplinary it is. Chuchu himself is the best example here—he is a visual artist, filmmaker, musician, and cofounder of the arts space the Nest. In an age where the issue is the design of complete systems, we will need to think more comprehensively. We will also need to be capable of working with more than one tool.

We must take leave of the myth of creative genius: an individual producing endless masterworks in a series, conceived one after the other by a kiss of the Muse. The twenty-first century is collaborative. And often, the people involved in the creation of a work do not even know one another; they are united solely by a common objective. Ushahidi, for example, was a reaction to the political unrest that spread through Kenya following the elections of 2008. An online map was produced by a collective, and was used to witness and follow violent events long after all other forms of public reporting had collapsed. The Ushahidi software is now employed in crisis centers around the globe, recently in the wake of the earthquakes in Haiti and Afghanistan. 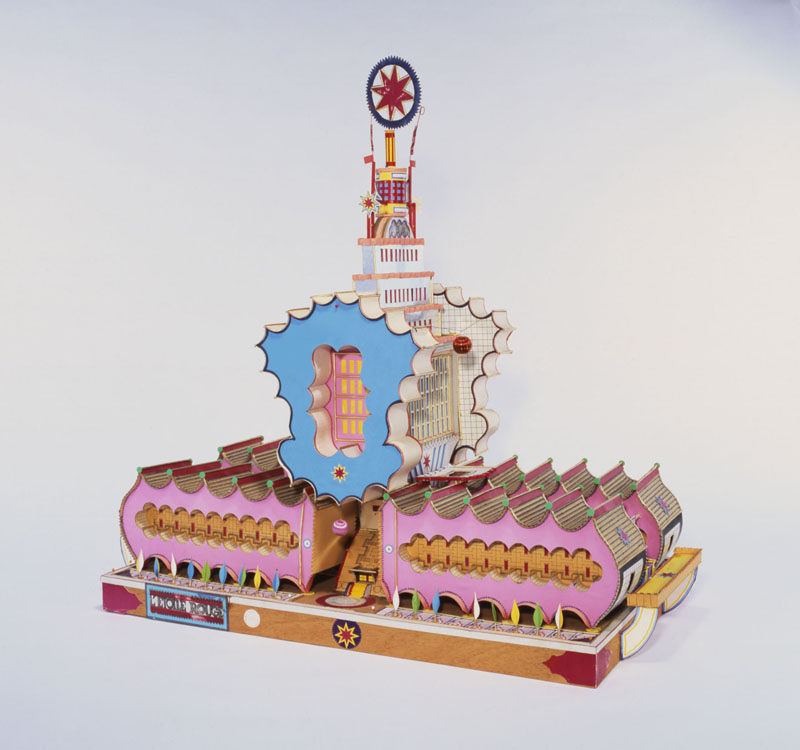 Projects like Ushahidi clearly demonstrate how small, decentralized units in large-scale networks can react with greater success to complex problems than large, singular, centralized ones. It is in Africa that we have first been able to see clearly how mobile telephones are superior in functionality to fixed-system telephones, how small solar-energy cells are better than big power stations, and how M-Pesa is better than the banks. The mobile money transfer system, introduced by the Kenyan mobile phones provider Safaricom in 2007, functions with impressive simplicity using a network of local M-Pesa agents, who may also incidentally be selling gas, groceries, or newspapers in their shops. The desired amount is paid in at one location and paid out at another on presentation of a code sent by SMS. 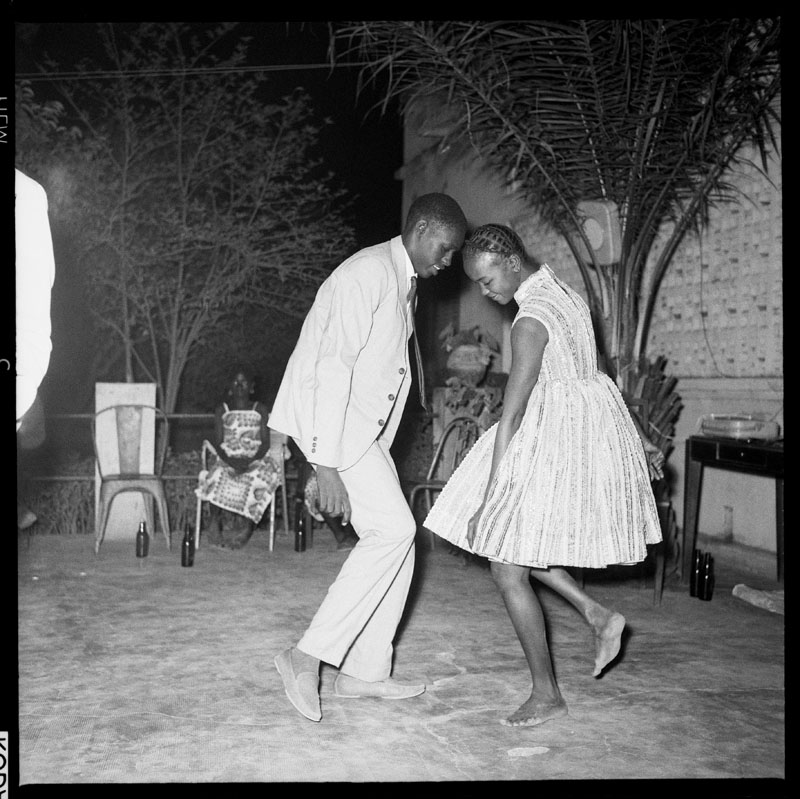 Photographer Malick Sidibé captured this striking image of young people dancing on Christmas night in 1963 in Bamako, mali. It exudes the lifestyle of a confident new generation who were liberated from colonialism and related easily to a global culture (not unlike young people across the continent today).

Despite all of this decentralization, there are nodes and centers in networks in which the activities and impulses are denser and occur more swiftly than in the periphery. By the mid twenty-first century, 66 percent of the world’s population is expected to be living in cities. Design will ultimately be called upon to react to all the resulting challenges. The powerful influence that cities and the urban environment exert on creative work can be seen in Africa today. Kader Attia, Bodys Isek Kingelez, Vigilism, Michael MacGarry, Mikhael Subotzky, Meschac Gaba, James Muriuki, and Justin Plunkett are just a few of the many creatives whose work revolves around the city. 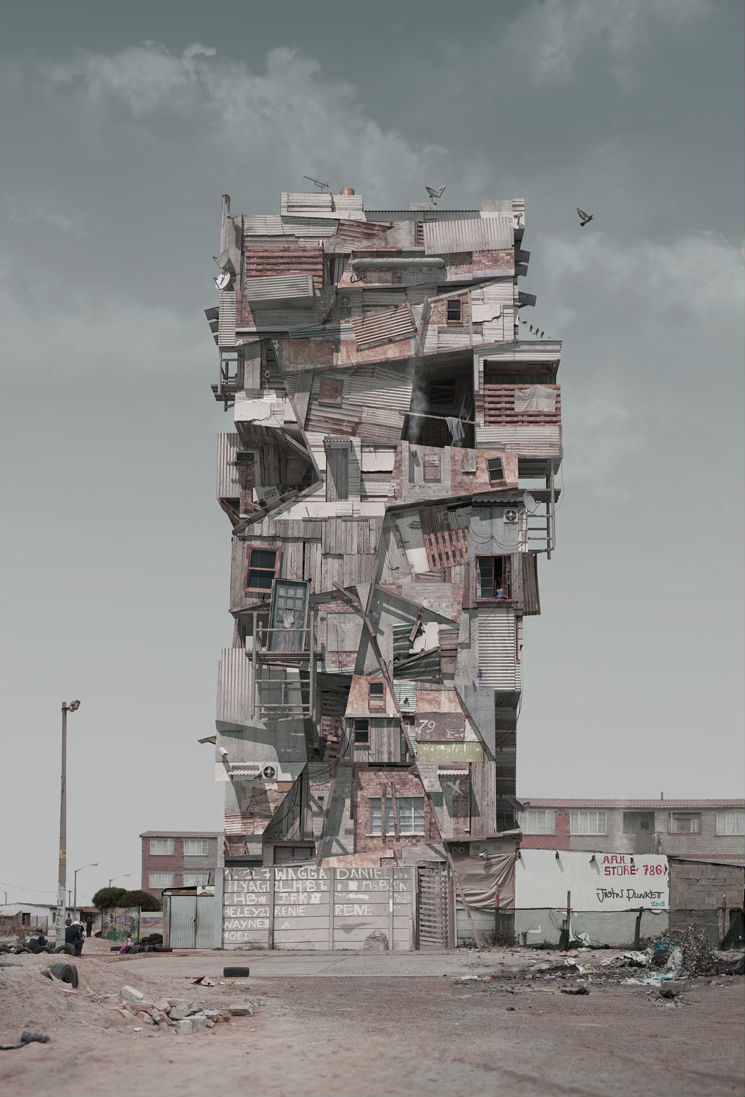 Timber huts and shanties are piled onto each other to form the Skhayascraper, a digital collage from Justin Plunkett’s Con/Struct series.

In Africa, it is often the small, shabby, and informal city that is the driving wheel for the formal one. We already have the two gears at work in furniture and product design. The significantly larger one represents traditional industrial production; the other is the maker culture. They seem to have very little to do with one another—the conveyor belt of the furniture factories, and the little studios and workshops in which people around the world, but above all in the Global South, are busy producing things with analog or digital tools. Very soon, however, we are all going to be makers in some sense. We will be printing products and furniture on cheap but powerful 3D printers (or we will have these printed for us)—all items that we will have customized appropriately from online patterns to meet our personal needs. When this happens, informal maker culture will be driving formal industrial production. 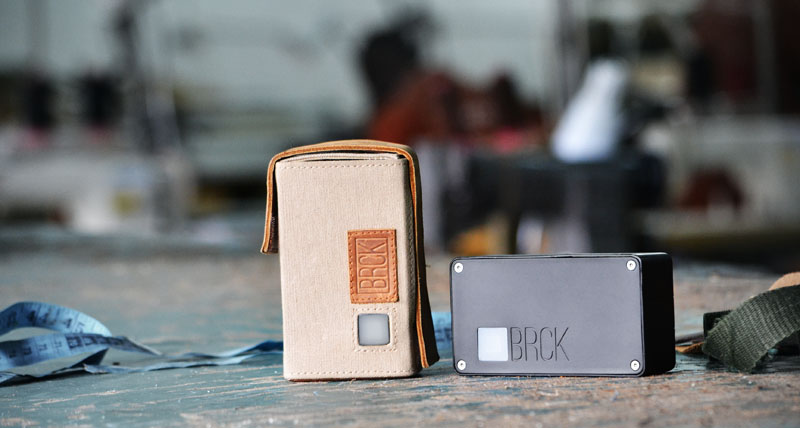 Designed in 2013 by the founders of the digital platform Ushahidi, the BRCK uses a 3G data-enabled SIM card to provide a seamless Internet connection in remote areas in 140 countries.

Defko Ak Ñiëp, a FabLab in Dakar, shares its backyard with a large apartment block, a mosque, a professional training center for girls, and a nursery school. A community garden has appeared on this formerly neglected plot of land since April 2014. The initiators of Defko Ak Ñiëp—a saying in the Wolof language that means “do it together”—are not primarily interested in creating a snug little spot for their lunch breaks. What is much more important here is establishing shared neighborhood work and shared pleasures. The principle is to make the share economy perceptible and something to experience. Our results-oriented, performance-based society accepts the value of processes very unwillingly. Yet, despite this, we will soon have no choice but to understand: in times of change, the way is the goal.

Okwui Enwezor speaks often about the Tokunbo market in Lagos, where the main items for sale are secondhand goods from the West. Tokunbo is Yoruba for “from overseas,” but it also means “second child.”The precision with which this word pinpoints the negative connotation that recycling still has today is extraordinary: this is all garbage, but at least let’s make the best of it. The Ghanaian artist El Anatsui has chosen used bottle caps as one of the main components in his work. The large-format wall hangings he produces from these materials fetch prices of a million U.S. dollars and more on the international art market. In the face of such prices and values, how can we still speak of post-industrial materials as garbage or “second best”? What we must do instead is to regard the mountains of waste we have created as material resources. We can no longer meaningfully employ terms such as “used metal.” We must simply refer to metal. Period. 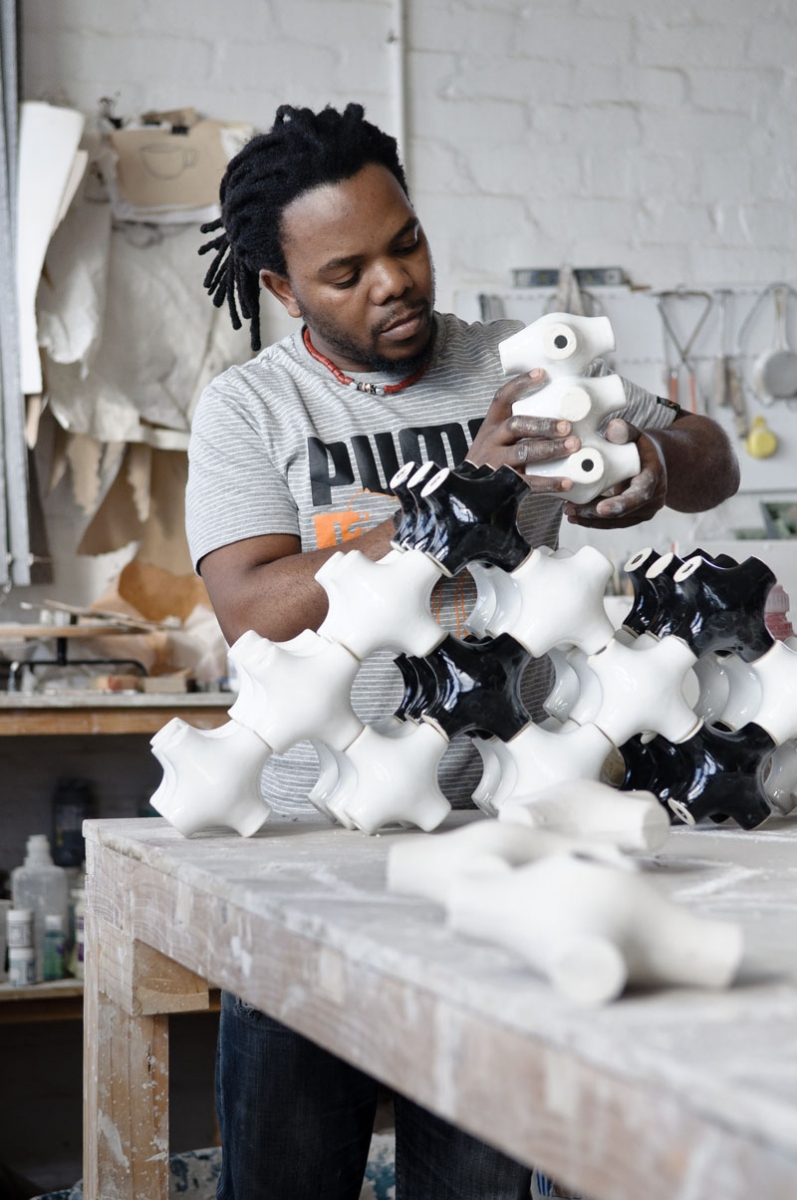 8. Design is creating the bridge between analog and digital

The share economy is a good example of a question that frequently goes unanswered today: How do we bring our analog existence into line with the digital age? Altogether more thrilling opportunities are opened up through the Internet. The BRCK, Ushahidi’s latest inventive offering, is a tool that lets us get on with chasing bits and bytes through the Web, undisturbed by all the adversities of analog existence. Using solar energy and a simple SIM card, this box—about the size of a brick—creates online links in places where there is no regular connection to a mains power supply or to the Internet. 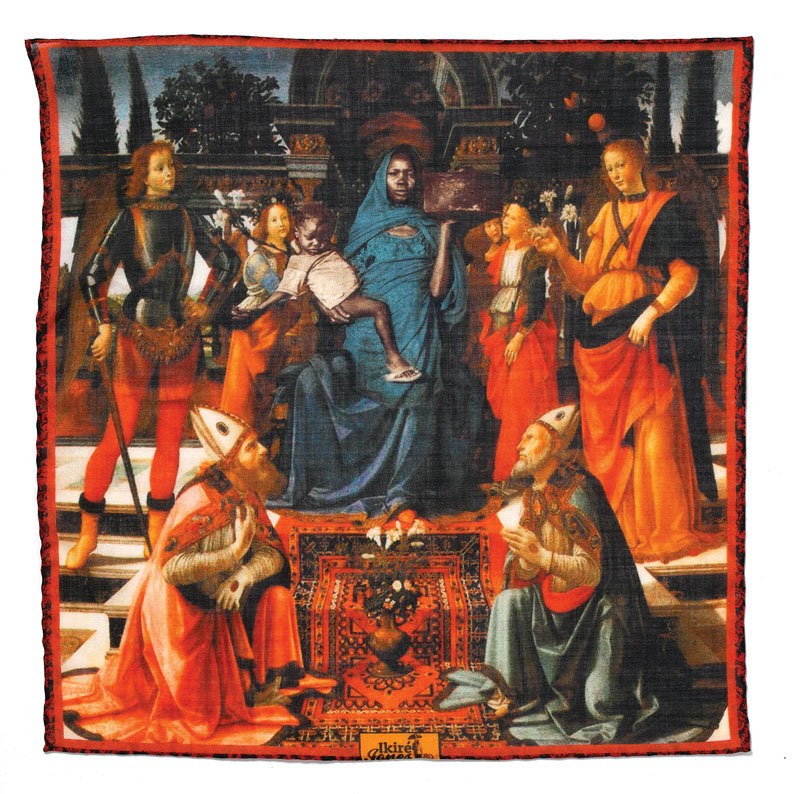 9. Design has a social and/or political agenda

The political dimension involved in such a reinterpretation may well seem to be ironic. For decades now, the North has been shipping a major share of its waste south to Africa. The Africans are now no longer sitting on vast garbage heaps; they have valuable resources at their disposal. One wishes that design would more readily show willingness to take up a critical position on this, as the Y’en a Marre movement in Dakar has done. A basic prerequisite for this would, of course, be for design to finally square up to its social responsibilities and not exclusively those of the market. 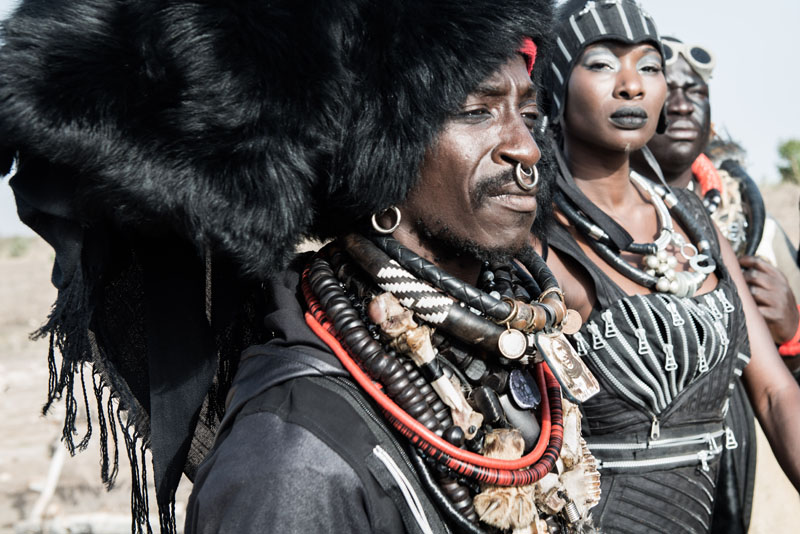 An image of Paris in 2081 printed on a scarf of the U.S.-Nigerian fashion label Ikiré Jones is a vision of the future in which visitors from the new Africa attract more attention and admiration than the Eiffel Tower. “As immigrants, they were derided and looked down upon. … That was years ago. Now they sidle through the crowds of onlookers as lenses are pointed in their direction and tourists ask each other who they are.” This is a striking vision. But not one that calls for the use of rose-tinted glasses—a little clear-sightedness is all we need.