In the 1930s, Alfred H. Barr Jr. and Philip Johnson became known as ambassadors of Modernism in North America, experimenting with Bauhaus concepts in both their work and their homes. 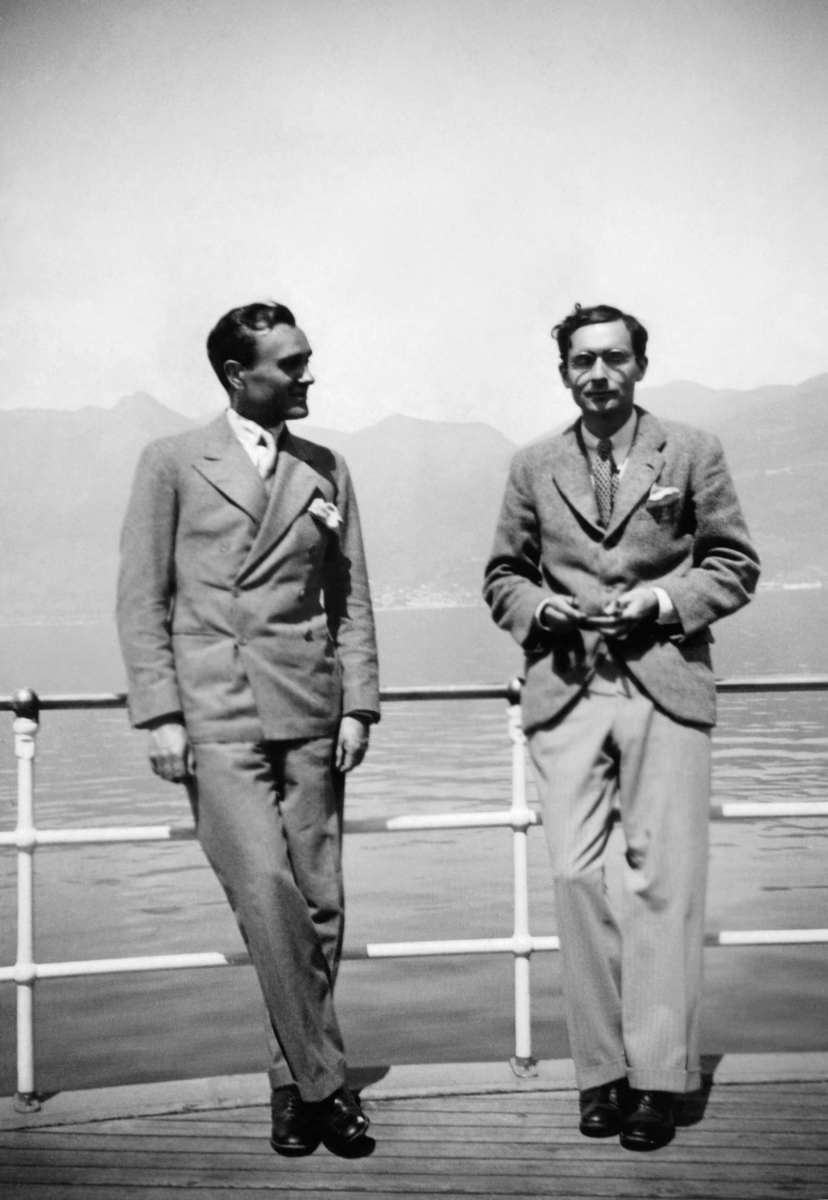 Alfred H. Barr Jr., founding director of the Museum of Modern Art (MoMA), and Philip Johnson, first director of its architecture department, were two leading proponents of the Bauhaus movement in America. With a “practice what you preach” approach, they used their own apartments in New York as design laboratories, testing their ideas about modern living through the use of furnishings, objects, and art by leading members of the European and American avant-garde of the 1920s and 30s. Their shared design sensibility can now be seen in Partners in Design: Alfred H. Barr Jr. and Philip Johnson (The Monacelli Press, October 2015), a book and touring international exhibition that kicks off at the Montreal Museum of Fine Arts (MMFA) in Quebec this April.

The idea for a show on Barr and Johnson came to David Hanks, curator of the Stewart Program for Modern Design at the MMFA, when Victoria Barr, daughter of Alfred and his wife, Marga, donated the modern furnishings of her parents’ apartment to the Montreal Museum of Decorative Arts (now part of the MMFA). “The gift included furniture designed by Philip Johnson and used in the Barr apartment,” says Hanks. “When we discovered that the Johnson and Barr apartments were in the same building, a floor apart, the comparison of the two interiors and the story of the personal and professional relationship of the partners was compelling.” That collaboration resulted in their Modern Architecture and Machine Art shows at MoMA, still considered landmark exhibitions. Here we examine the two premier ambassadors of Modernism in North America through their apartments and their furniture, which point to the genesis of a Bauhaus Modernism that is still influential today. 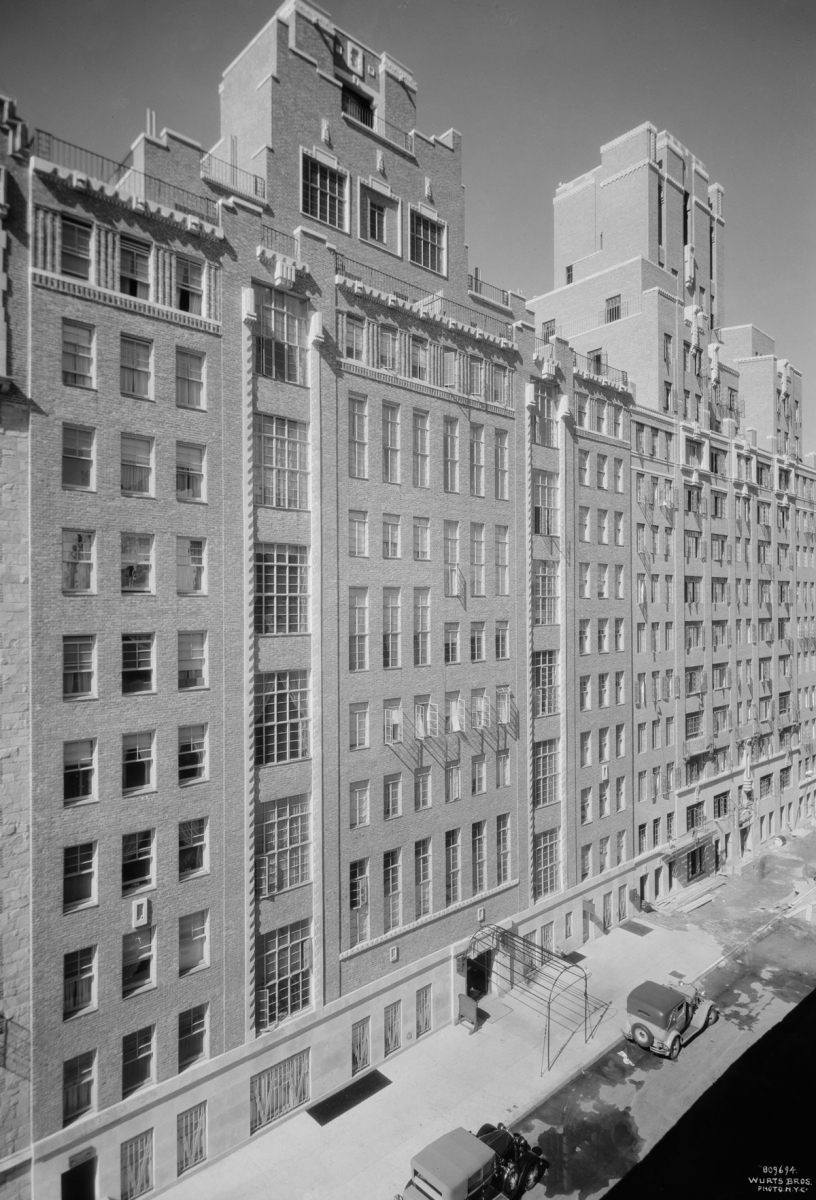 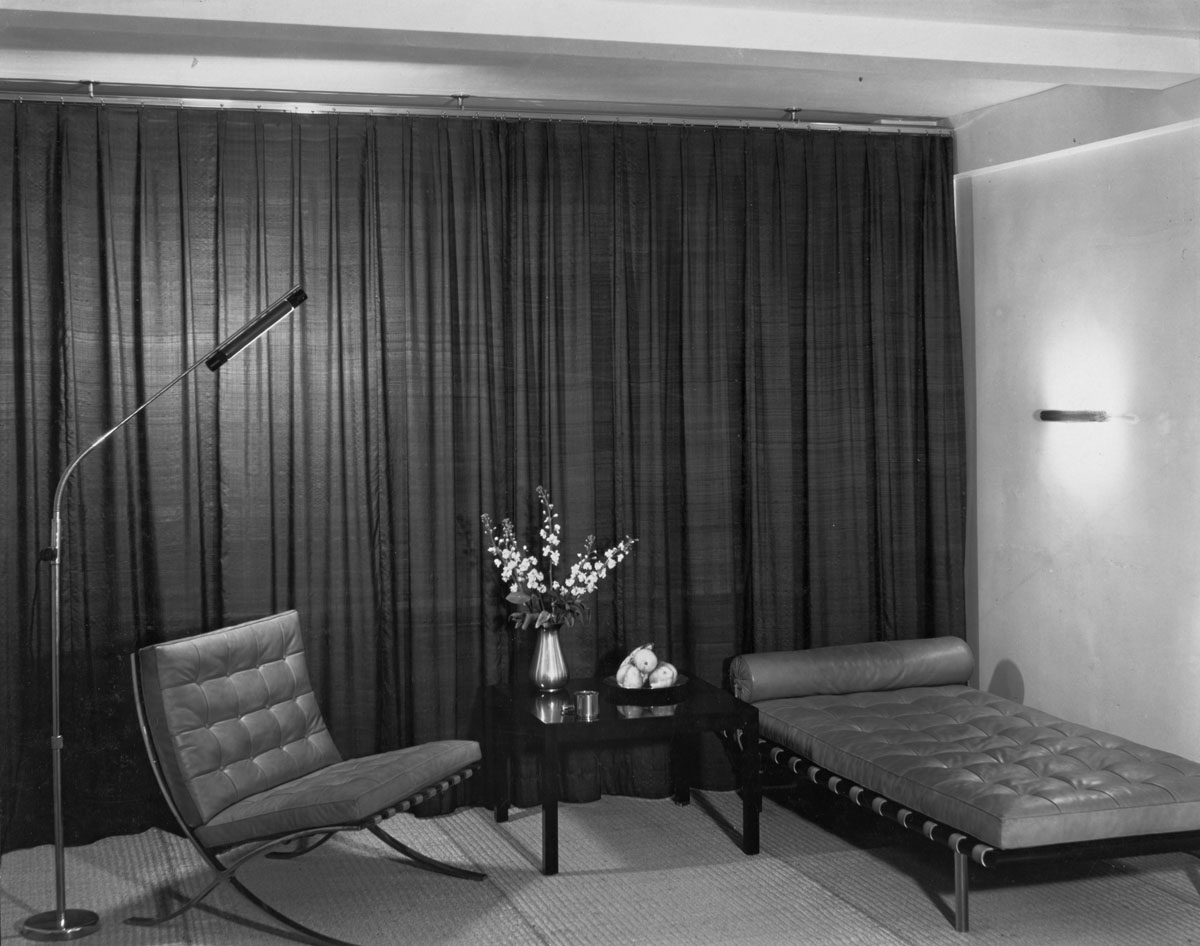 The living room—designed by Mies van der Rohe and Lilly Reich—of Johnson’s apartment at Southgate, circa 1930. Aside from the furniture designed by Mies, the space included the Halle Werkstätte lamp (far left).

Johnson’s residence at Southgate complex at 424 East 52nd Street was designed by Ludwig Mies van der Rohe and Lilly Reich in 1930—their first U.S. commission. Through their use of a less-is-more aesthetic and rich materials, the designers introduced Bauhaus concepts—such as the Barcelona chair—to America. Though the interior was an important example of the movement, it was somewhat ignored because it was a renovation. Johnson took his Mies-designed furniture with him to his subsequent New York apartments, which he designed himself. “The famous Johnson apartment with the view from the second story is often described as the Mies apartment,” says Hanks, “but it was designed by Johnson.” 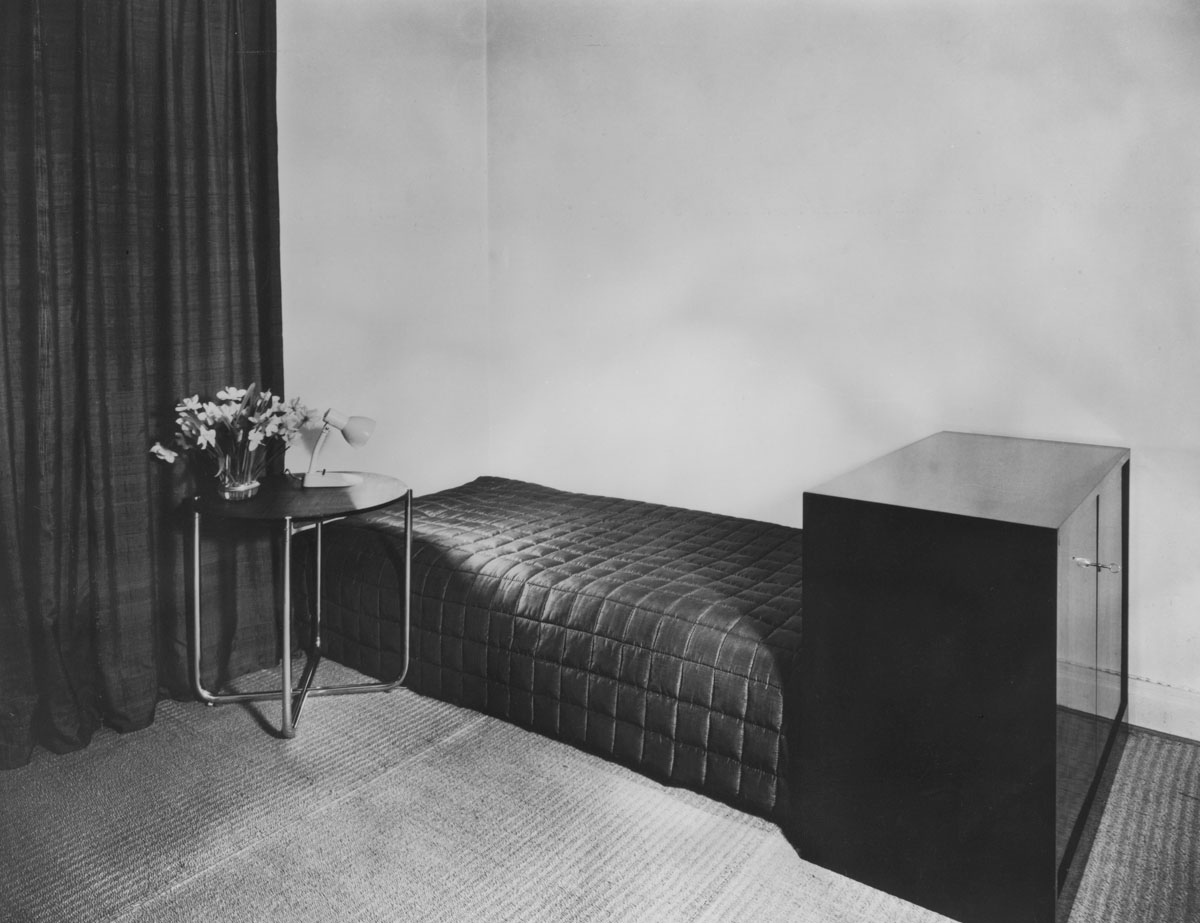 The furnishings and decorative treatment of Johnson’s bedroom also allowed it to function as a study and library where Johnson could work. 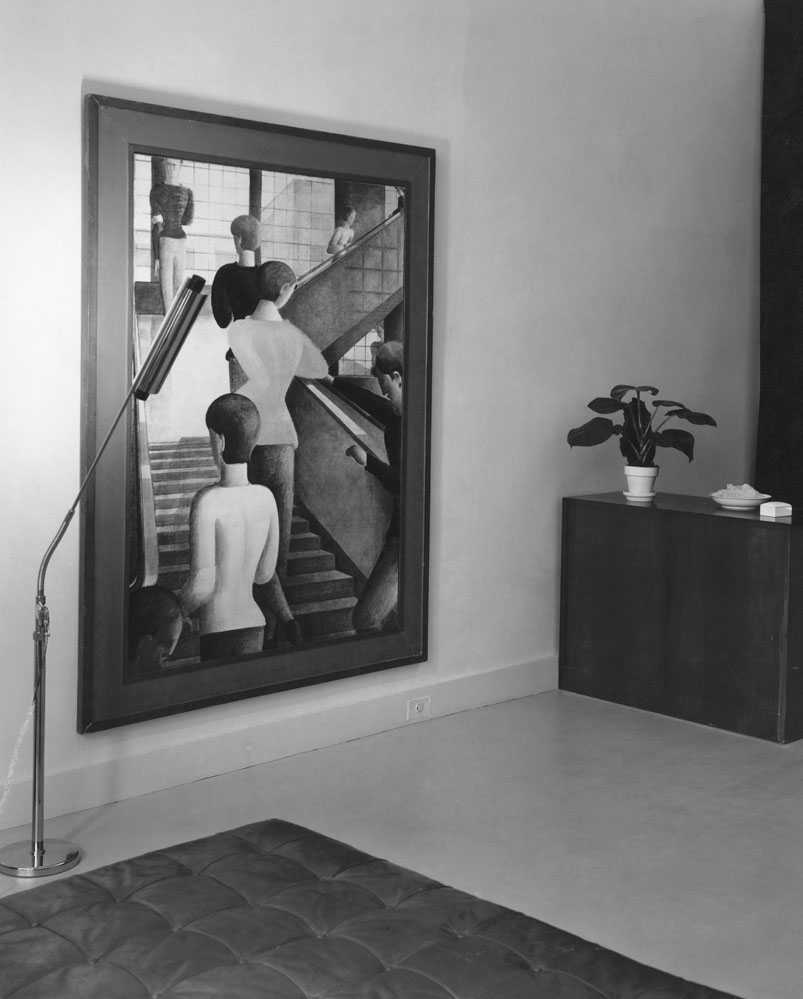 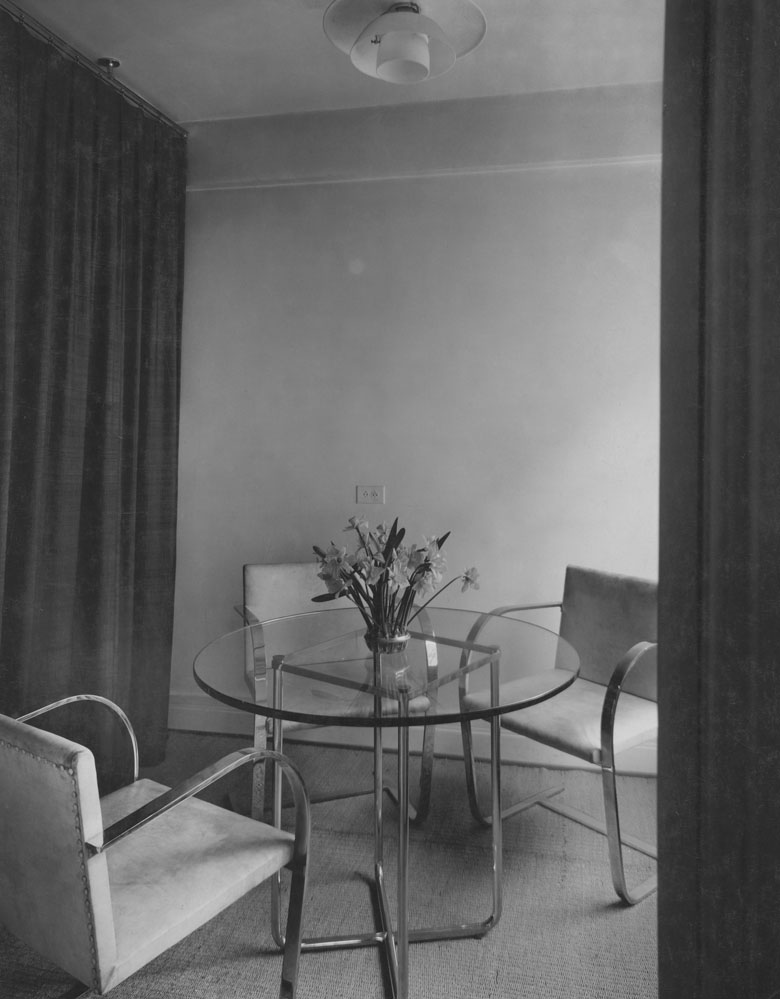 Johnson’s dining room at Southgate. The area was furnished with MR side chairs and a circular glass-top table designed by Mies. 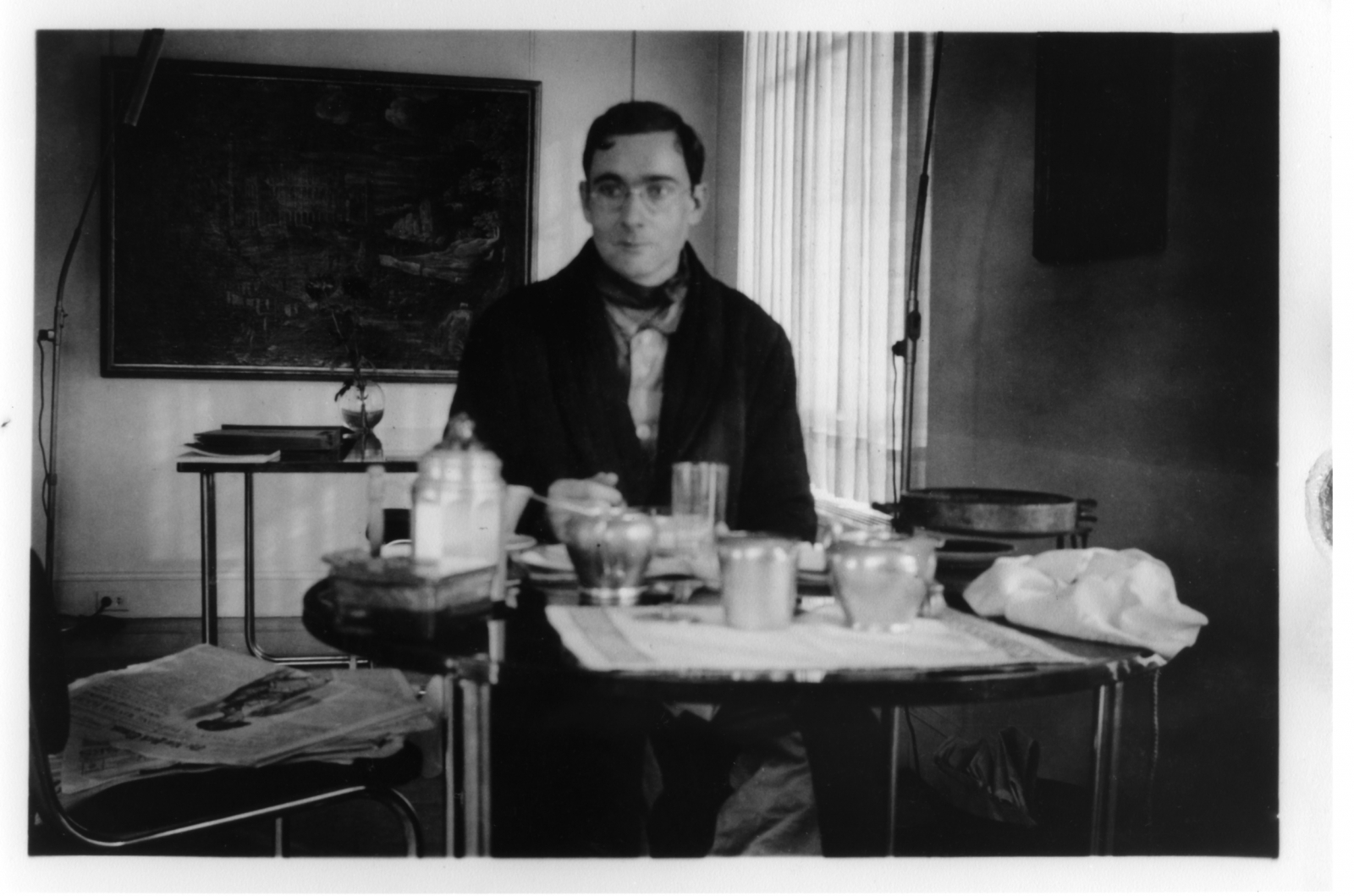 Alfred Barr at breakfast at the round Donald Deskey table in the Barr apartment at Two Beekman Place, circa 1934.

The interiors of the Barrs’ home at Southgate were never published; however, from letters and photos of the Barrs’ subsequent apartment at Two Beekman Place in the same neighborhood, Hanks was able to piece together a fascinating portrait of the interior. Barr and Johnson’s apartments were an interesting contrast. “Johnson’s spare Mies apartment had no art,” says Hanks, “while Barr’s was designed for his personal art collection. Johnson’s Mies apartment was done relatively quickly, while Barr’s was created over a period of years. Through his friendship with Barr, Johnson developed an interest in the fine arts, becoming an important collector in his own right, and it can be seen in his later apartments.” 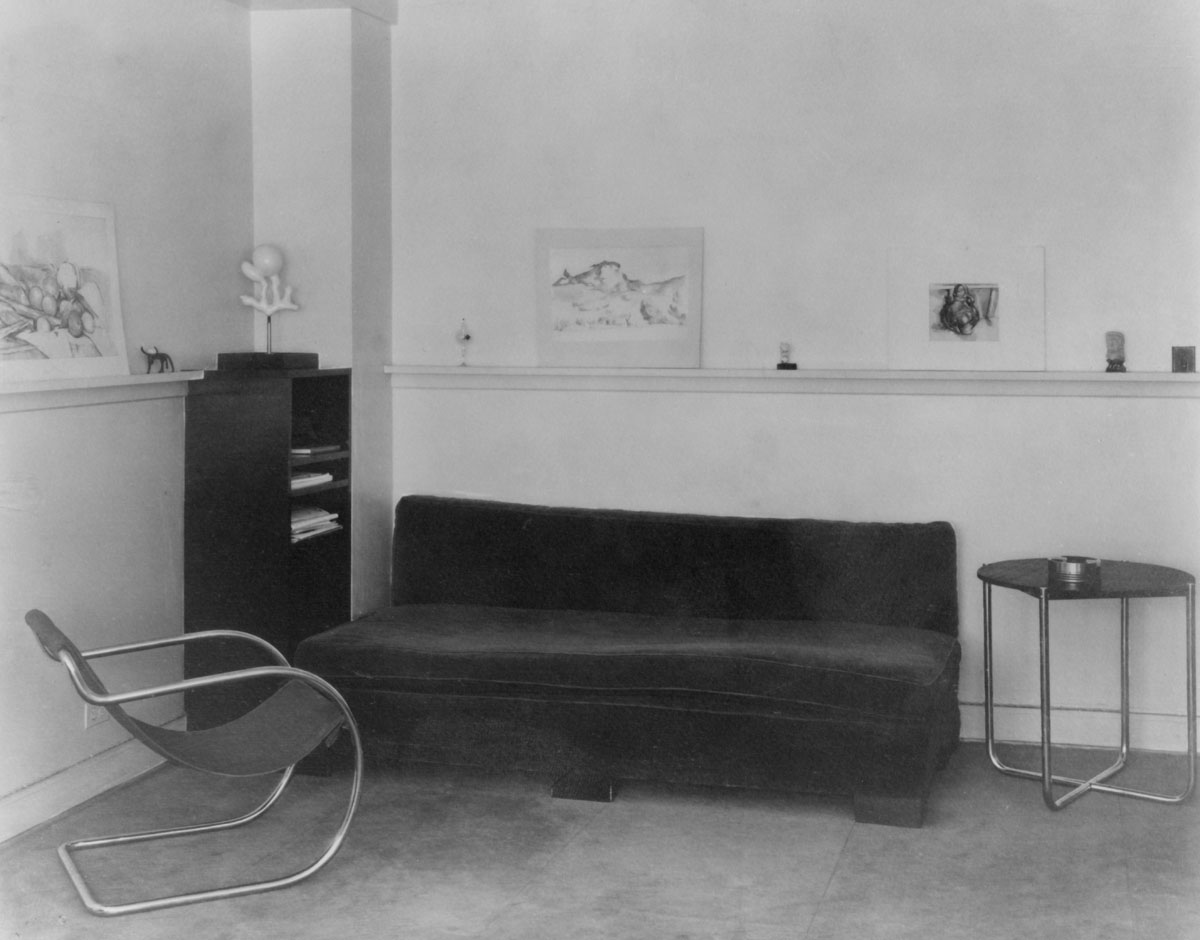 A corner of the Barr living room with a built-in shelf to display works of art. The Johnson-Clauss tubular-steel chair is to the left, and a Deskey table is to the right of the sofa. 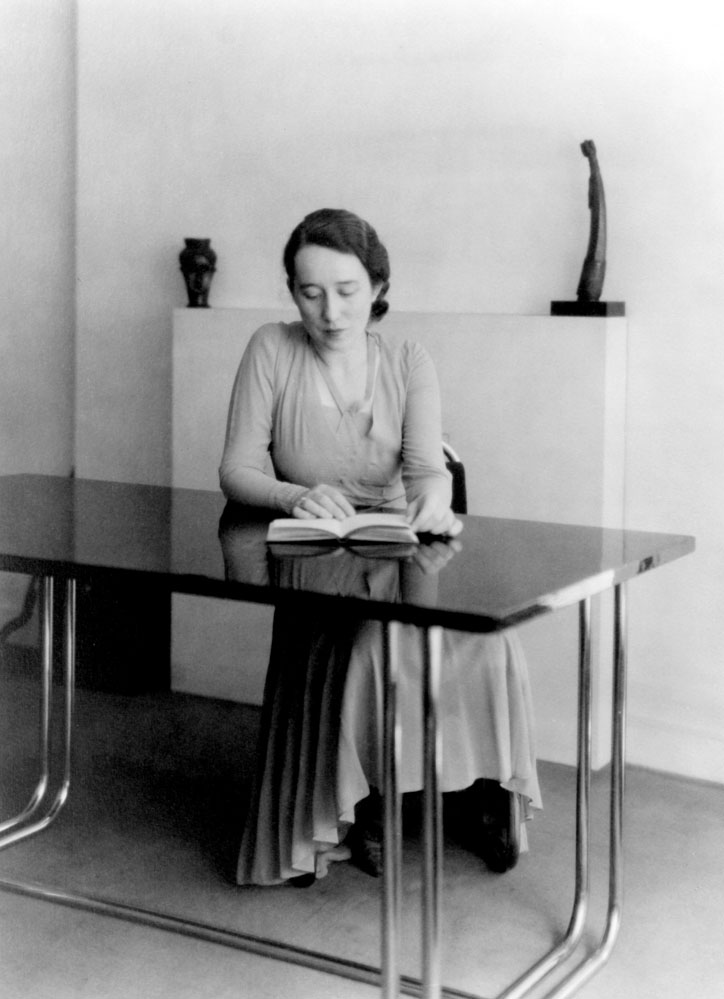 Marga Barr seated at one of the Deskey tables, in front of a shallow built-in pedestal. 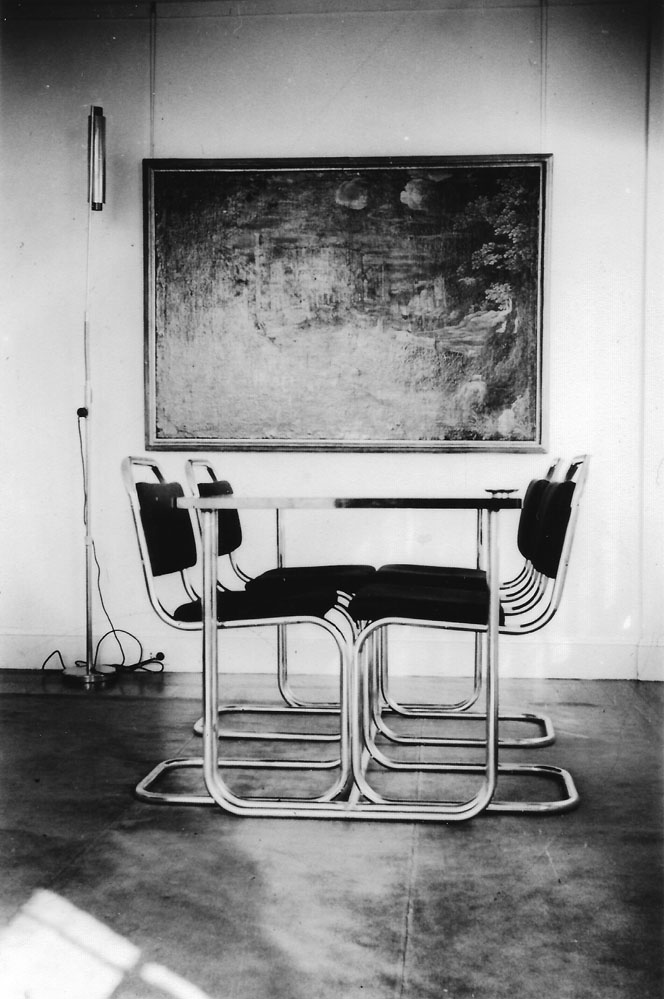 A Deskey table and chairs in front of Colloseum at Night by Williem van Nieuwlandt III with a Halle Werkstätte lamp at left. 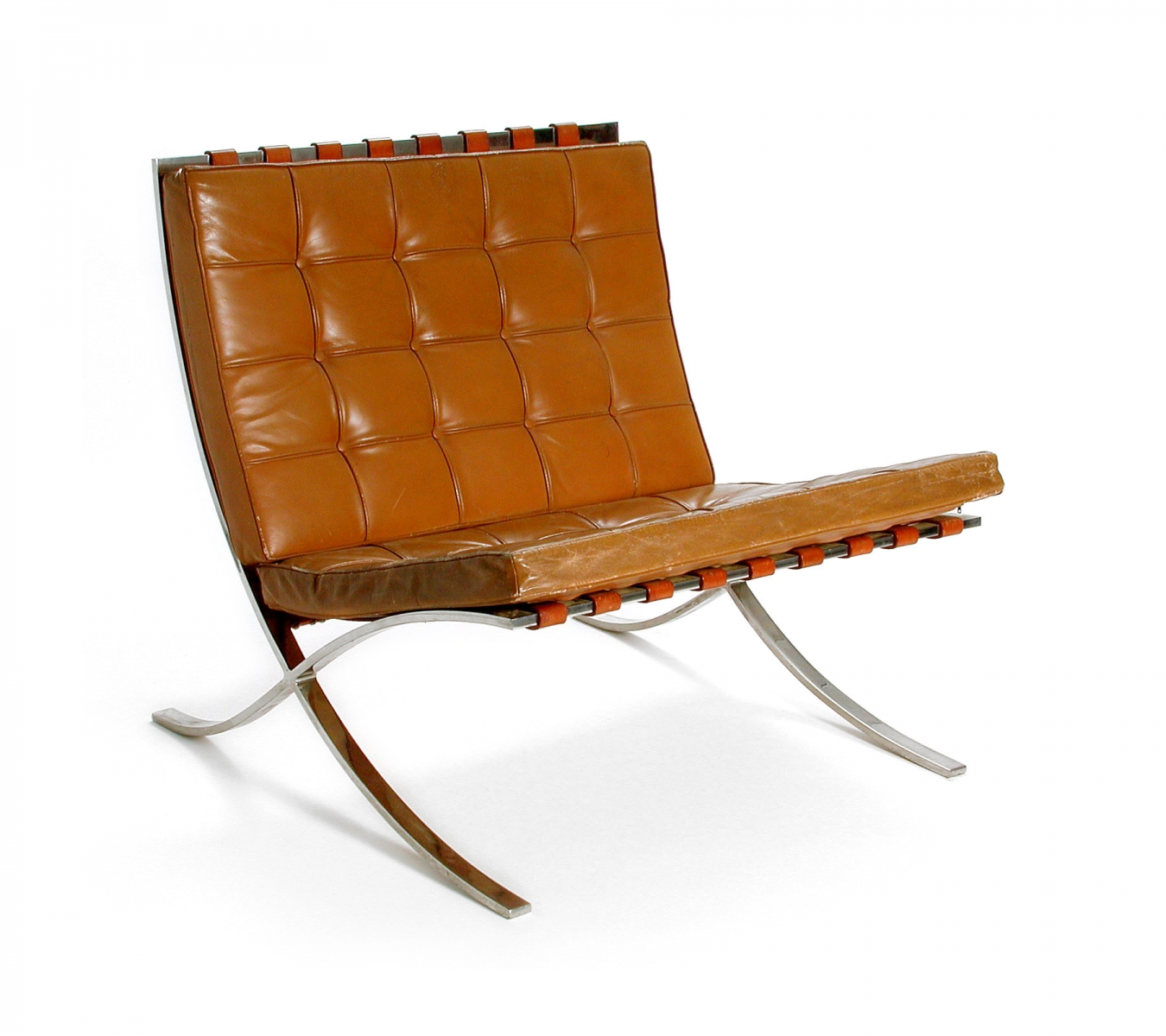 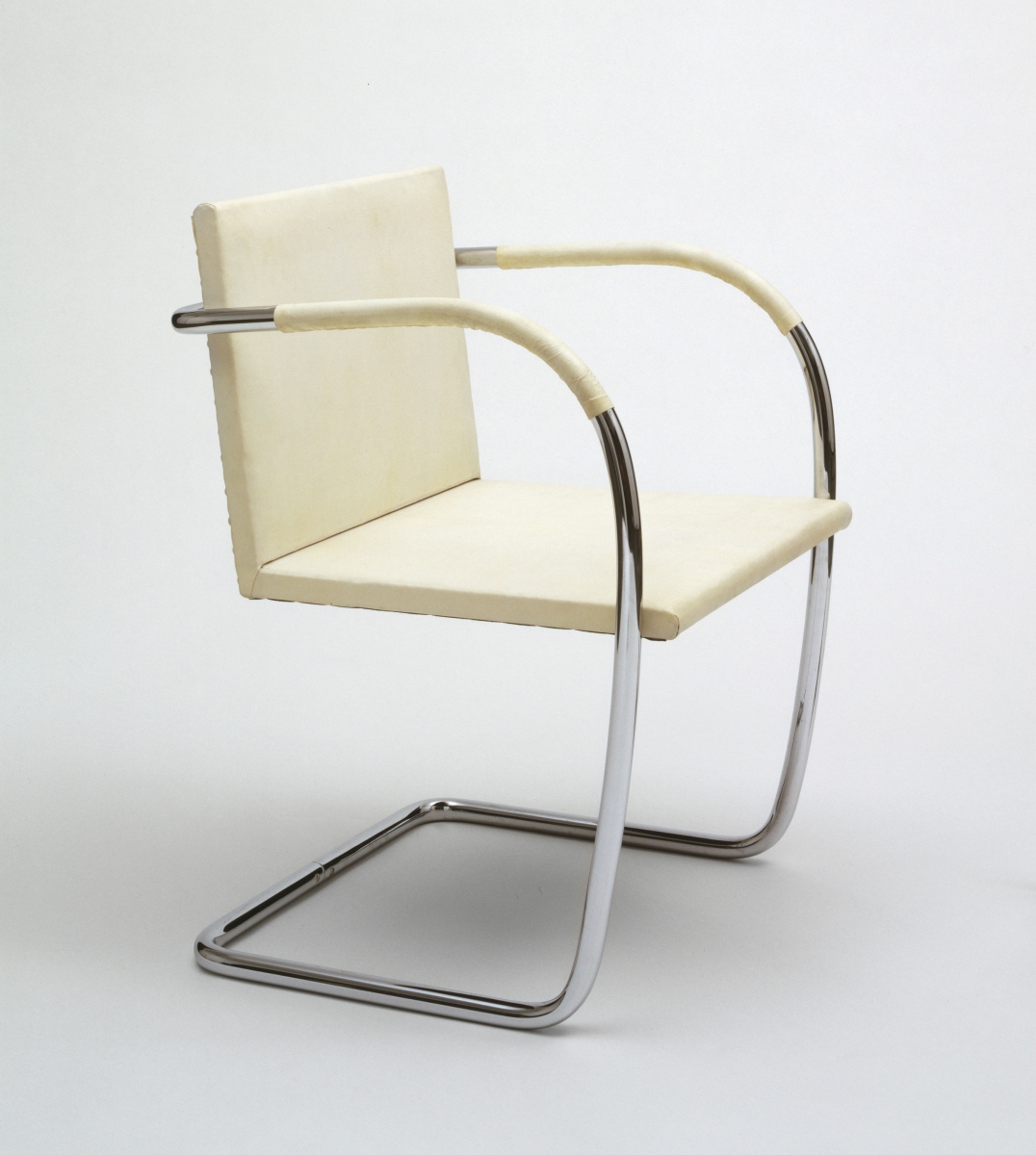 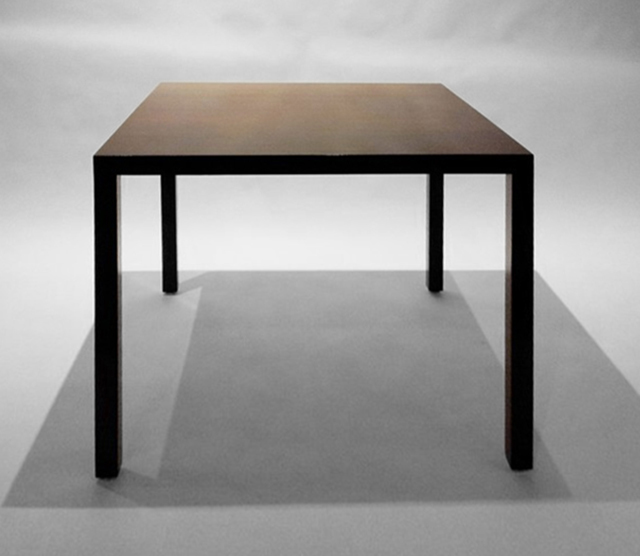 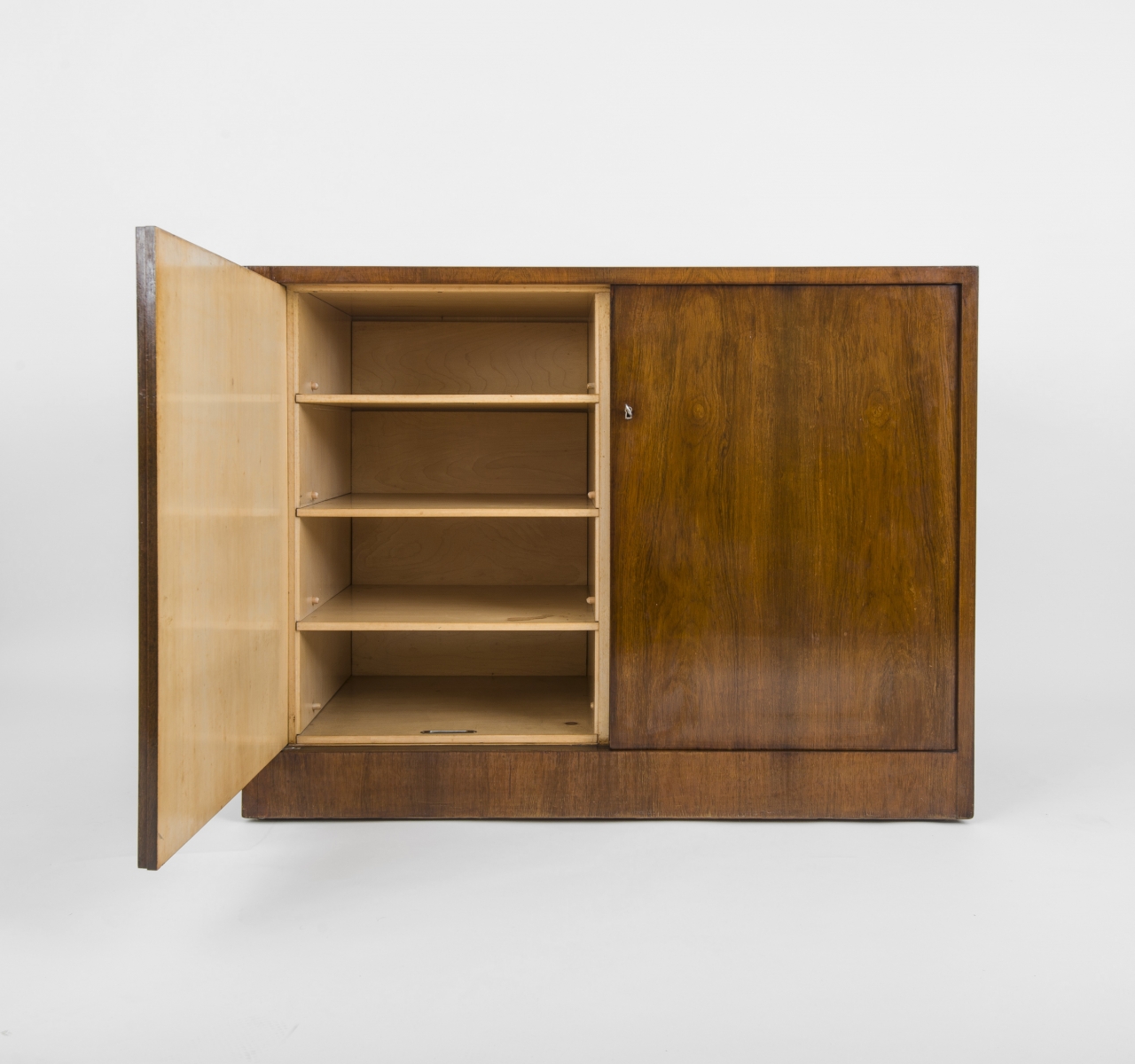 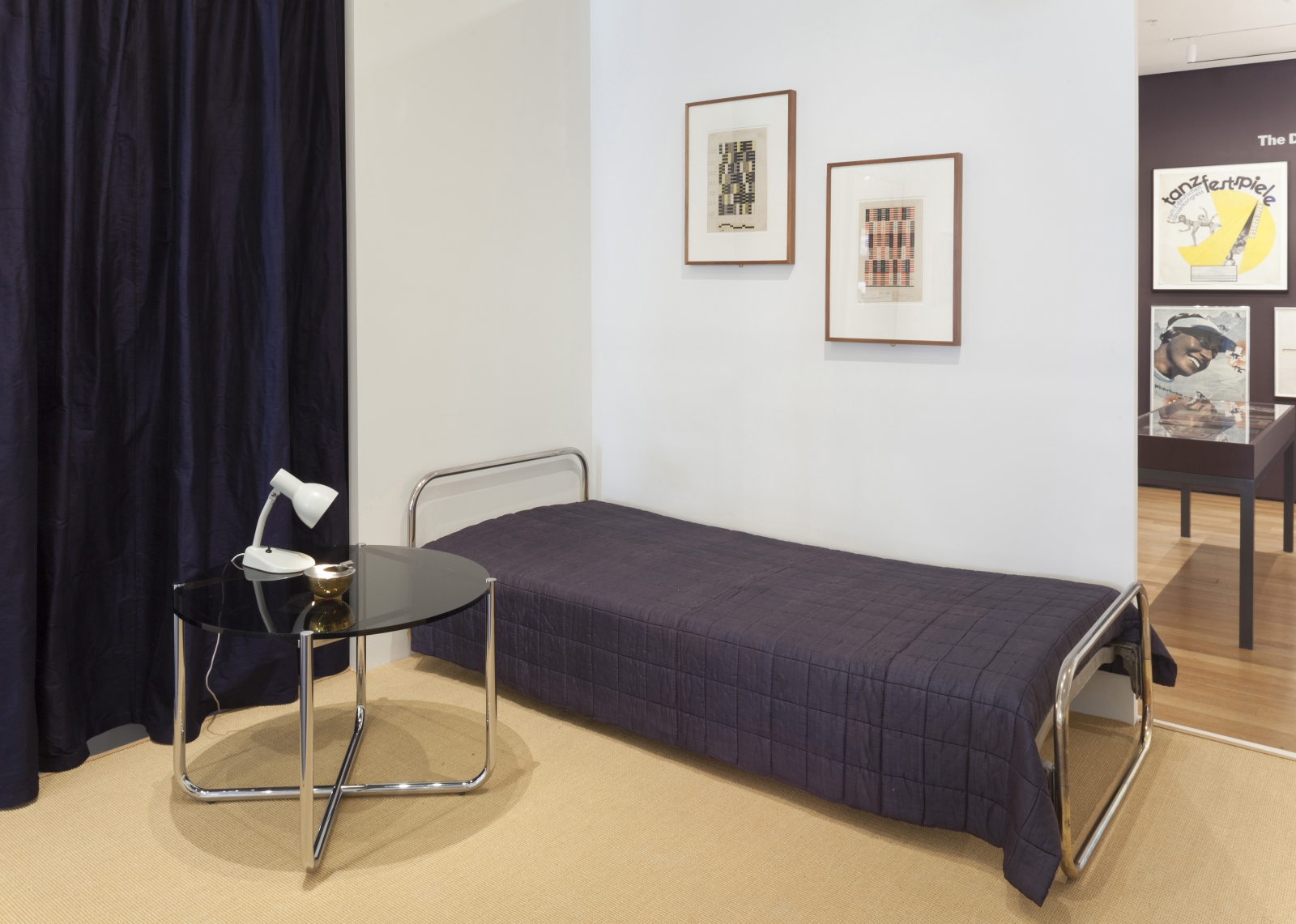 Quilt, designed by Lilly Reich, circa 1930 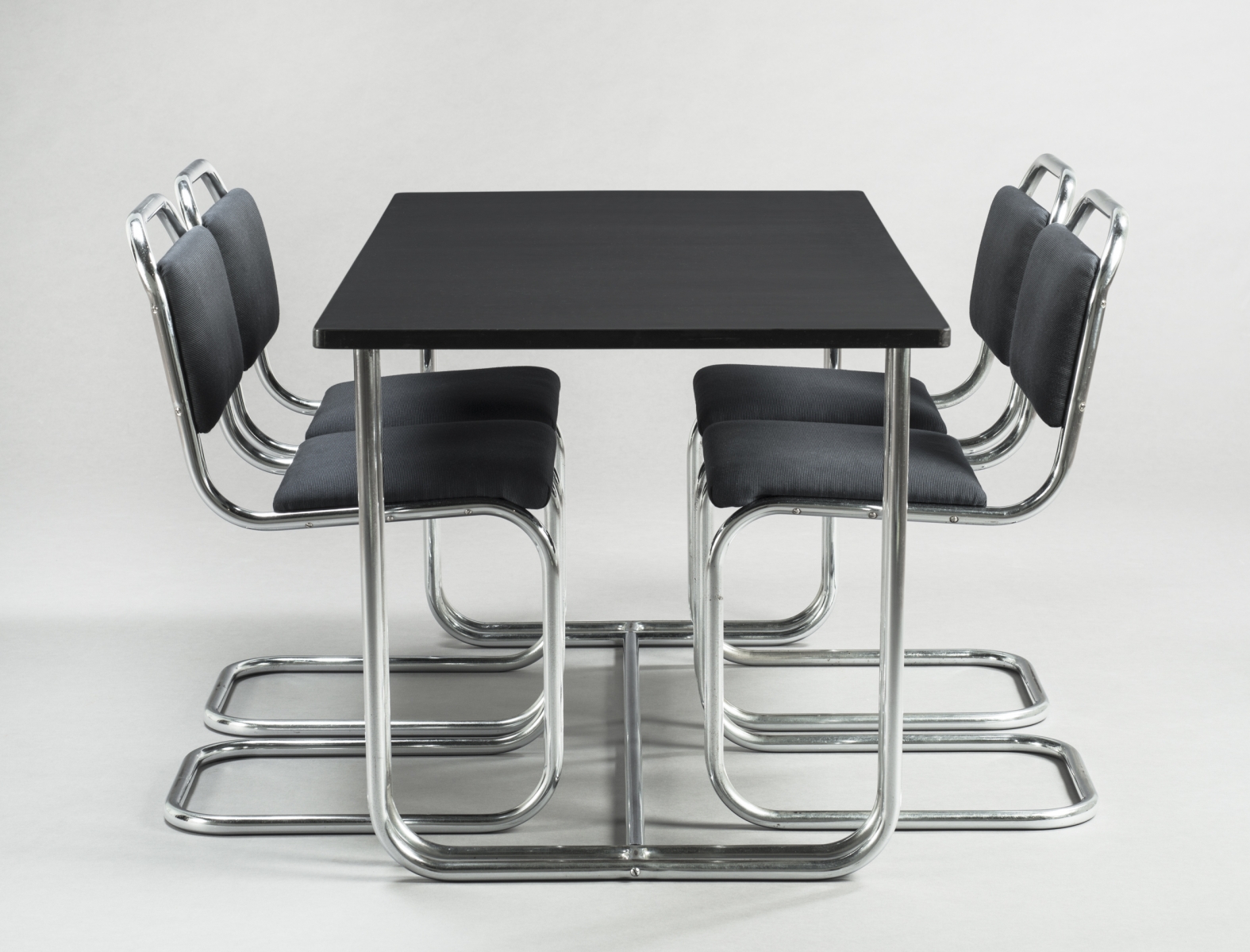 Dining table and chairs, designed by Donald Deskey, circa 1930 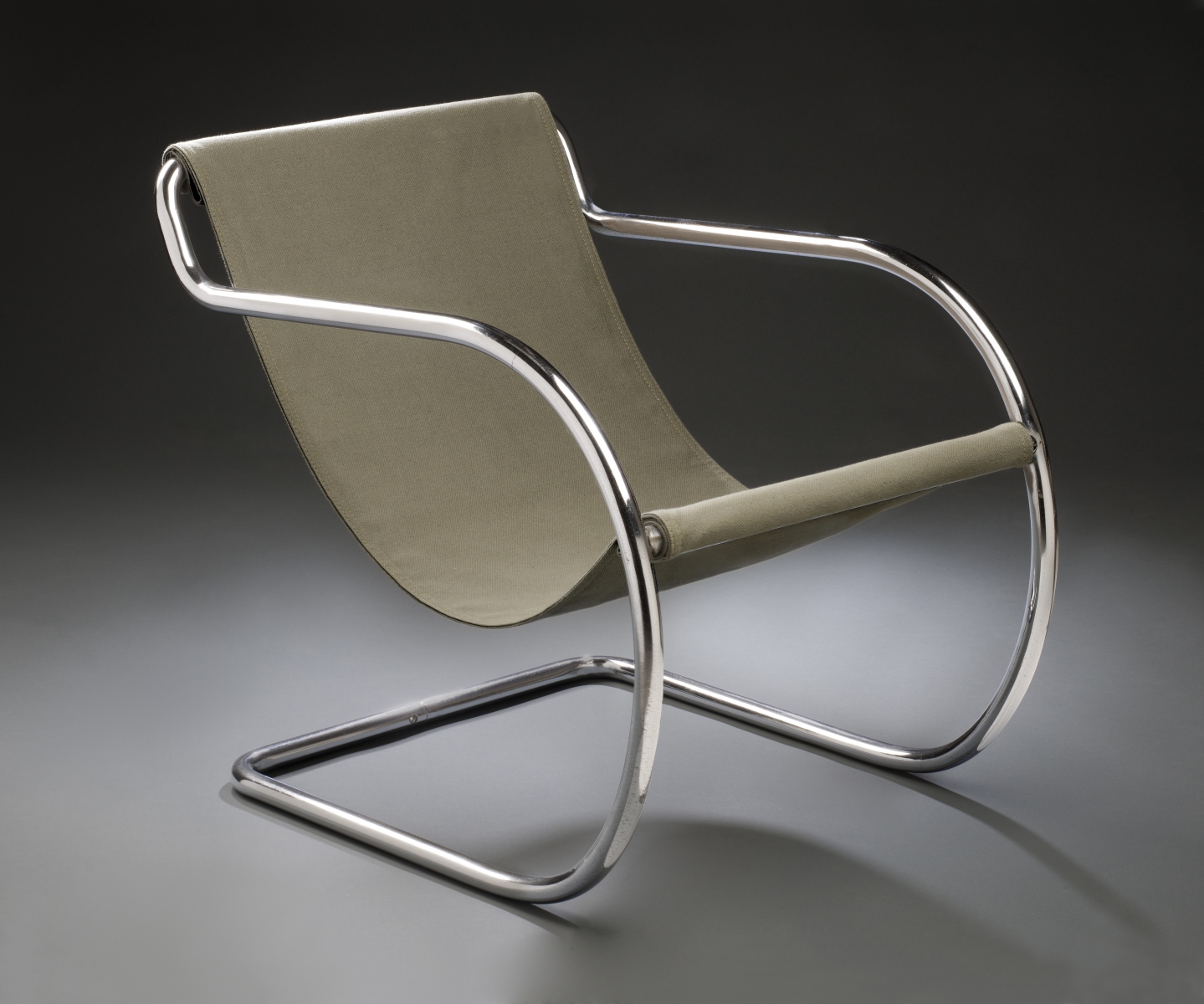 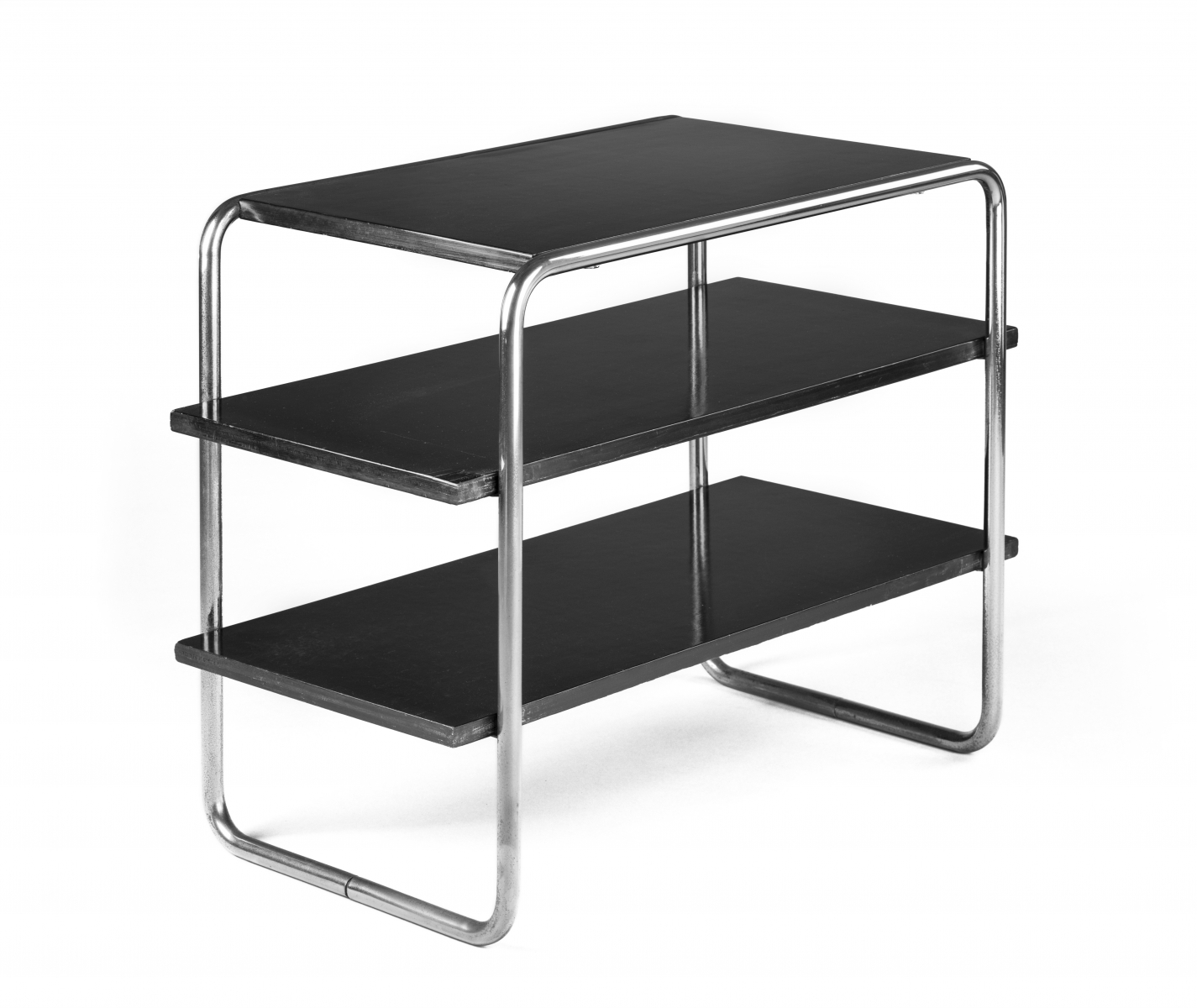 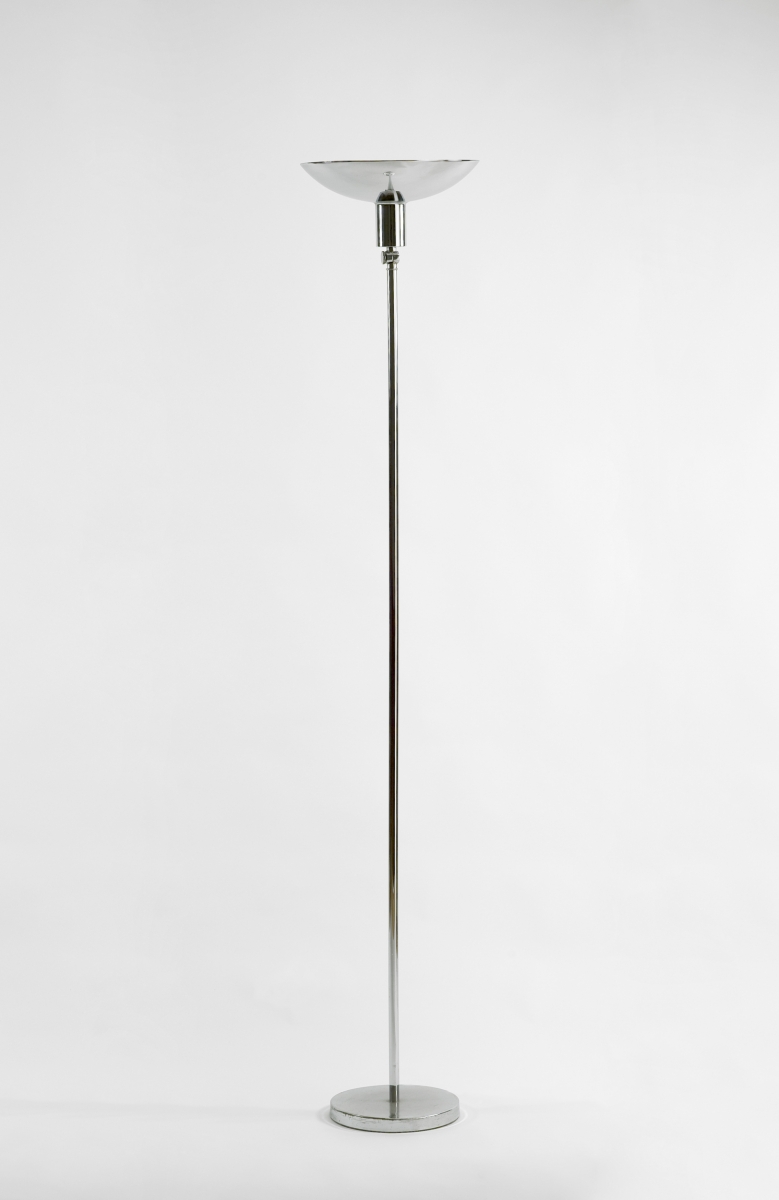