Applying the Occupy Model to Sustainability

There’s something daunting about a speaking slot called “15 Minutes of Brilliance.” At the Living Future (un)conference, these speaking engagements took place before the keynotes each day, a nice way to give individual speakers a platform. But the “brilliance” and the (somewhat false) time limit give these sessions a sense that the person might spontaneously […] 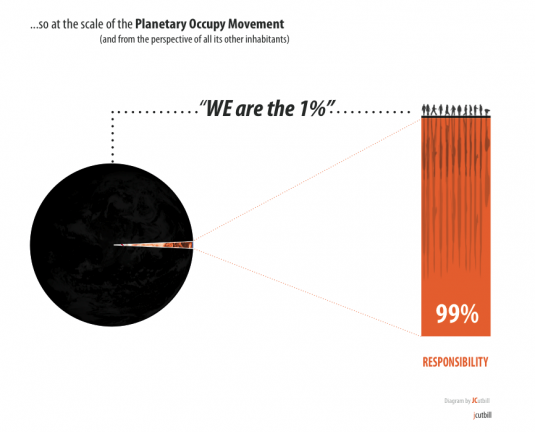 There’s something daunting about a speaking slot called “15 Minutes of Brilliance.” At the Living Future (un)conference, these speaking engagements took place before the keynotes each day, a nice way to give individual speakers a platform. But the “brilliance” and the (somewhat false) time limit give these sessions a sense that the person might spontaneously combust after she finishes. (Think Cinderella at midnight.) Or that it will be the high point of her career. Where to go after brilliance, publicly exhibited?

One thing is for sure, Jennifer Cutbill, has a lot of brilliance ahead of her. Her 15 minutes introduced many of us to her wisdom, care, and passion, something that her mentors had already glimpsed at. Cutbill is an intern architect at Dialog in Vancouver, B.C. “She stole the show,” as Nadav Malin of BulidingGreen.com noted at an intriguing conference wrap-up session. I talked to him later about Jennifer when he added, “She wowed me with more facets of the one-percent-99-percent meme than I would have imagined possible, and showed us our ‘response-ability’ to make a difference.” (More on that “response-ability” term in a moment.)

Cutbill’s presentation took the potent “one percent” concept and challenged it to be a strategy for serving the public good. She shifted the scales of the Occupy movement’s version of the 1/99 frame to the planetary level: 99 percent of the living space on the planet is ocean, she noted (quoting Alanna Mitchell from Sea Sick: A Global Ocean in Crisis), and so, she continued, “At the scale of the Planetary Occupy Movement (and from the perspective of all its other inhabitants), we are the one percent. Together, as a species, we occupy less than one percent of the Earth, yet the imbalance between the rights we exercise and the responsibilities we assume for them (or rather, fail to assume) is oppressively burdening the rest of the whole.”

She advocates transforming from dispersive to integrative negotiations, where the rights of all are met while working together toward the wellbeing of the whole. “I suggest that we leverage the response-ability of the one percent,” she said, “to transform ideas into action.” The “misspelling is intentional. Cutbill proposed that “responsibility” is a moral/ethical obligation, but “response-ability” is the ability to respond, literally: “the ability of living systems to respond to changes in their environments; and the ability we have to change patterns of thoughts and action.” 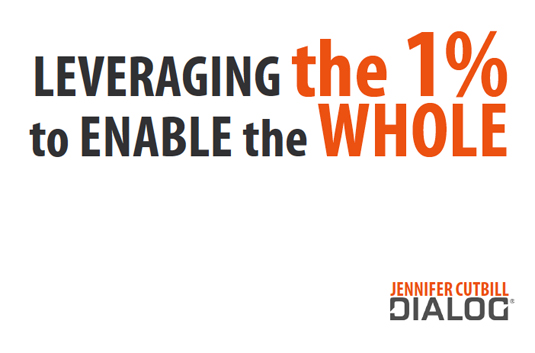 She referenced the Public Architecture “1% Program,” which many firms have joined, committing to dedicate one percent of their time toward pro-bono services. Building on that notion, she issued the Cascadia Call to Action, a three-part challenge. She asked all participants to leverage perspiration, and suggested that if all of the roughly 1,000 participants donated one percent to pro bono services—work, she said, “expressly in service of the 99 percent”—it would equal a nine-person firm working full time for the public good. The second element is to leverage regulation: Lobby governments to levy a one percent tax on all development permit applications (over half a million) to create an “Enablement Fund.” And she urged leveraging inspiration: “Share your stories and networks and inspiration with fellow Cascadians” and others. Right now. Tomorrow.  Next week. Brilliant, let’s do it.

Kira Gould, Assoc. AIA, LEED AP, is director of communications for William McDonough + Partners, an architecture firm with studios in Charlottesville, Virginia, and San Francisco. She is also co-author of Women in Green: Voices of Sustainable Design.