Bertoia Beyond Knoll: The Lesser-Known Works of a Mid-Century Master

Two new exhibits at the Museum of Art and Design take a fresh look at the career of mid-century artist and designer Harry Bertoia.

Harry Bertoia plays his sound sculptures in a barn converted into a recording studio at his home near Bally, Pennsylvania, 1973.

It takes only the slightest touch to get the sound sculptures going, but when you do, they emit seemingly endless reverberations of tones that range from high church bells to low moans. Standing in the middle of the platform among the deceptively simple groupings of upright metal rods, you can feel the vibrations coming off them—a sensation like static electricity on your fingertips.

These sound sculptures are seminal to understanding Harry Bertoia’s life’s work, as Atmosphere for Enjoyment, a new show at the Museum of Arts and Design (MAD) in New York, argues. Yet most people have no idea these sculptures exist, let alone that the famous artist and designer spent decades of his life dedicated to them.

Bertoia, of course, is best known for his bent-wire furniture, produced for Knoll in the 1950s. Groundbreaking at the time, the line remains instantly recognizable and the stuff of a million knock-offs. The designs were so successful that they have overshadowed the artist/designer’s vast and varied body of work. MAD’s ongoing exhibition is here to fix that, finally amending and amplifying Bertoia’s legacy.

The museum actually organized a second, complementary exhibition that collects the metal jewelry designs of the artist’s early career. That show, Bent, Cast & Forged: The Jewelry of Harry Bertoia, features designs that span the early 1940s through the ’60s. It was initially mounted by the Cranbrook Academy of Art, where Bertoia first began to experiment with metal-working, and where he studied alongside Charles Eames and Florence Knoll. Bertoia went on to work for Knoll from 1950 until 1952, when the company released three of his designs: the wire Side chair, the Diamond chair, and the Bird chair. (Three more designs were released posthumously.) It was the success of the collection, and the lump-sum payment he received for the rights to his designs, that allowed Bertoia to concentrate on his metal sculptures. He continued to focus on the sculptures until his death in 1978. 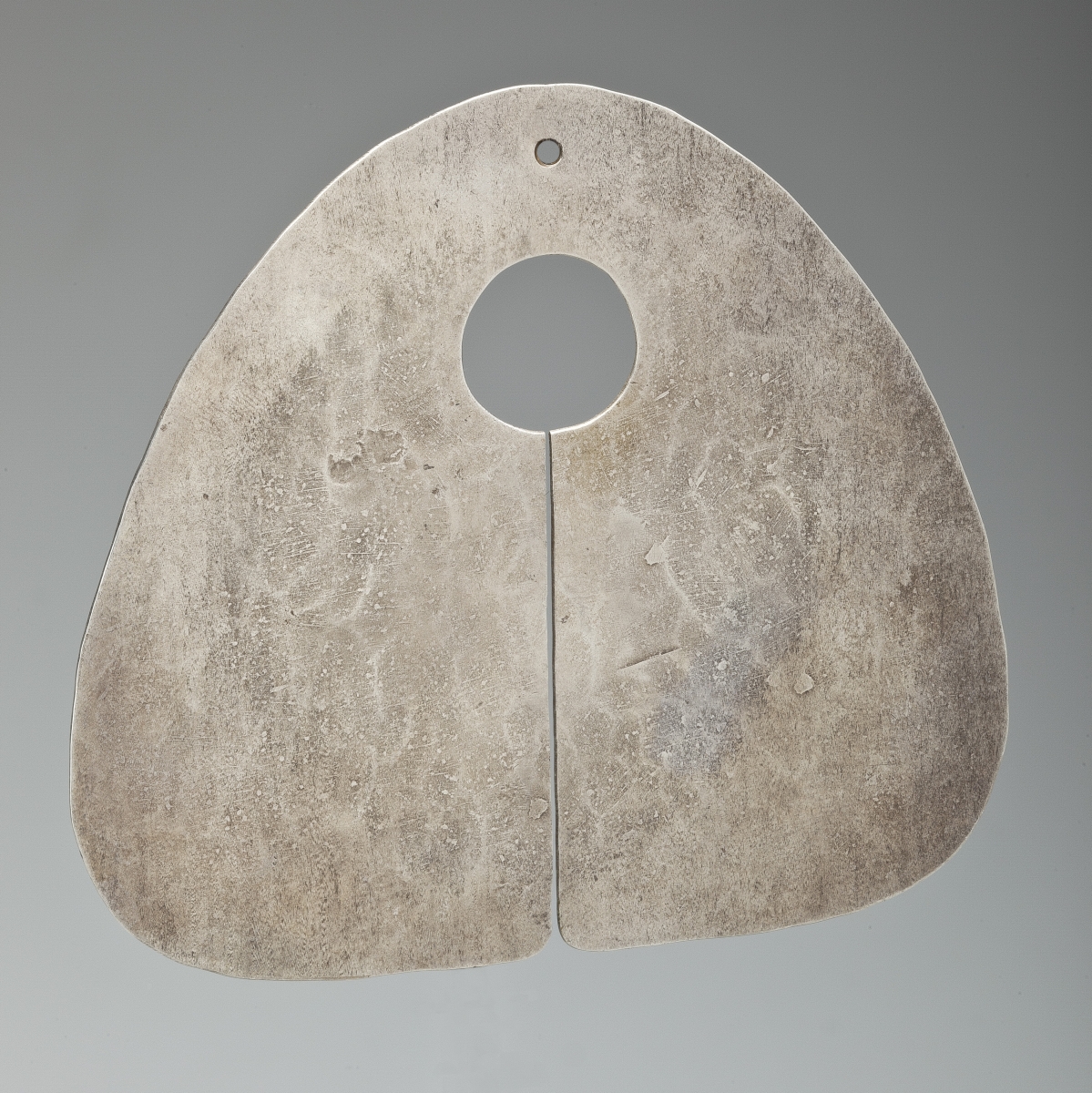 An early jewelry design of forged sterling silver, circa 1960s

Bertoia often began by sketching out his ideas using monotyping, a printmaking technique that involves applying ink or oil paint on a smooth surface, like a glass or metal plate, and then transferring the design by pressing a sheet of absorbent paper to the plate. In this clip, curator Shannon Stratton discusses a monotype that resembles the uvula, i.e. that bit of flesh in the back of our throats that is thought to aid in speech, and reflects on Bertoia’s creative process.

The sculptures produce an astounding array of tones when played by hand or simply activated—by wind or nearby movement or vibrations. In a 1972 interview for The Smithsonian’s Archives of American Art, Bertoia described each sound sculpture as having a unique voice; he remarked that hearing one for the first time was like “hearing the cry of a newborn baby.” Though he had no musical training himself, he was a music lover and was attracted to the idea of an instrument that could be played by anyone, noting: “There are no two people in the world that play them exactly alike.” Like his previous work, the sculptures exhibition Bertoia’s fascination with line, form, and the properties of metal materials.

Curated by Shannon Stratton, Atmosphere for Enjoyment takes its name from the Bertoia-coined term “sonambient,” meaning a sound environment, or experience. Bertoia’s sonambient work took shape in a 200-year-old barn on his property in rural Pennsylvania, where he painstakingly accumulated what he considered to be his best sound sculptures: 91 metal rod configurations of varying heights, widths, shapes, and materials that rise up from the old wooden floor like a reedy orchestra.

MAD has created its own sonambient environment, where visitors can listen to an immersive sound installation by John Brien, using Bertoia’s original Sonambient recordings, while lounging in Bertoia-designed chairs. One corner of the room is occupied by a collection of sound sculptures made by Val Bertoia, who was his father’s long-time studio assistant. They stand on a wooden platform that mimics the amplifying effect of the floor of the Bertoia barn. Rounding out the exhibition are monotypes—the ink-on-paper sketches where Bertoia worked through his ideas and attempted to visualize frequencies and sound waves—and a sampling of some of the over 300 reel-to-reel recordings. 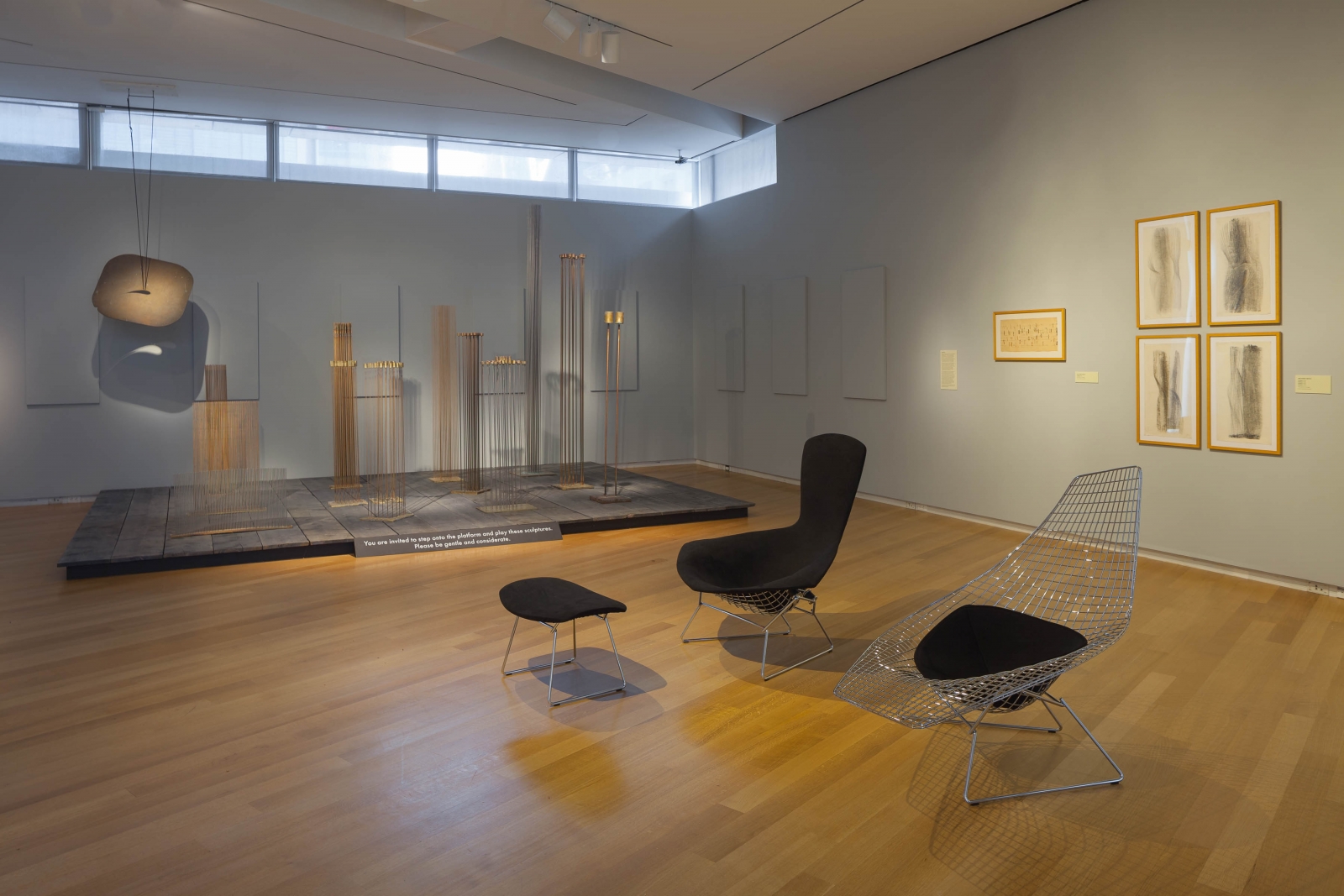 Val Bertoia’s sound sculptures stand in one corner of the Atmosphere for Enjoyment exhibition. Some of his father’s monotypes can be seen on the wall to the right. These are the sculptures that can be heard in the recording below.

Curator Shannon Stratton demonstrates some of the different types of sculptures.

In keeping with Bertoia’s conception of the sculptures, Stratton felt strongly that the sculptures be accessible to the public. Not only can visitors interact with the objects during twice-daily guided tours, but the museum opened up time slots for musicians to experiment with them. (Stratton says the spots filled up “immediately.”) MAD also commissioned sound pieces, from artists Lizzi Bougatsos and Robert Aiki Aubrey Lowe, recorded at the Bertoia barn, where groups including the Kronos Quartet have also recorded.

Bertoia once said of his collection of 91 sculptures, “What you see here will remain an assemblage. It will not be broken and dispersed.” Unfortunately, however, a recent lawsuit between Val and his sister Celia Bertoia was recently decided in her favor, allowing her to proceed with her plan to relocate part or all of the Barn’s collection to a museum.

The collection’s uncertain future makes the exhibition all the more important. The sculptures, as Stratton explains, are the culmination of Bertoia’s life’s work: “You’re seeing his interest in the natural world, his interest in kinetics, and his interest in the metaphysical all meeting in one object. . . .It feels like he resolved his interests in a body of work, which is probably why it keep him going for over a decade.”

Bent, Cast & Forged: The Jewelry of Harry Bertoia and Atmosphere for Enjoyment: Harry Bertoia’s Environment for Sound are on exhibit at the Museum of Art and Design until September 25, 2016.

Recording of and notes on La Serenita, 1971; recording made in the sonambient barn. Bertoia left behind at least 360 of these recordings. In this clip, Stratton describes the notes on several of Bertoia’s reel-to-reel tapes. Experimentation was an important part of the creative process for producing the sound environments. Bertoia would regularly tape over recordings, create loops, and layer sounds. 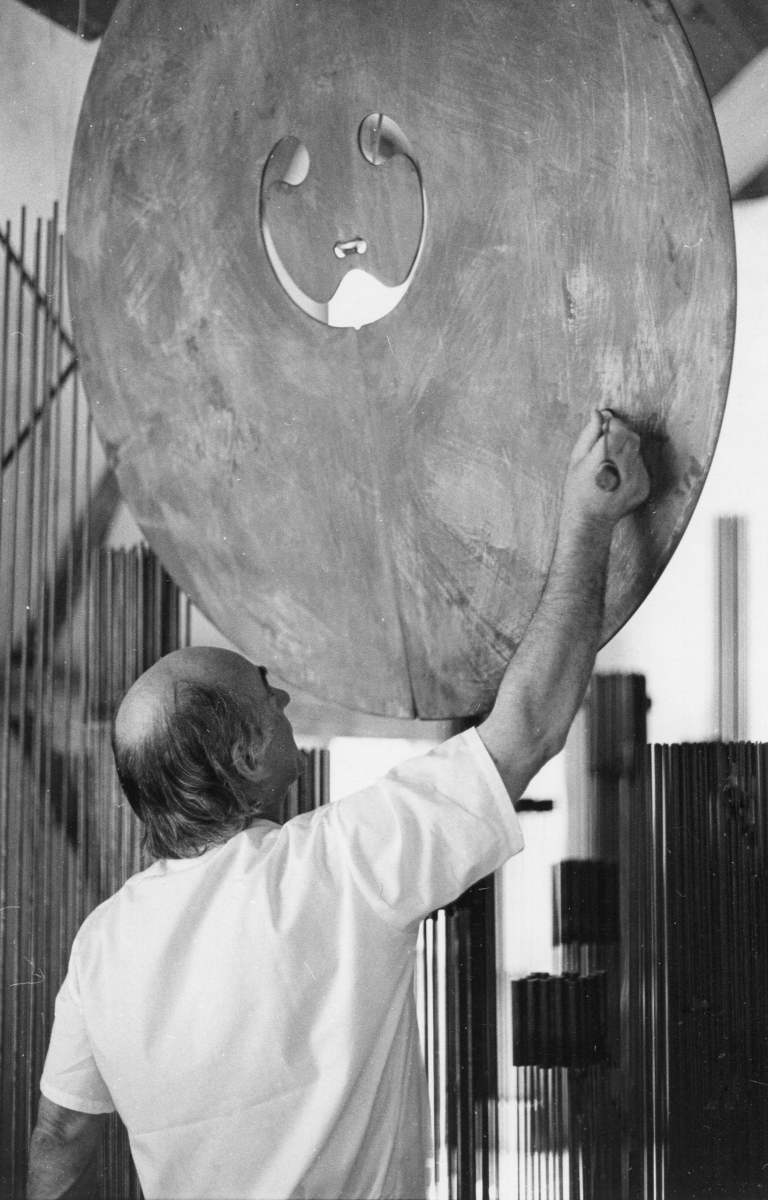 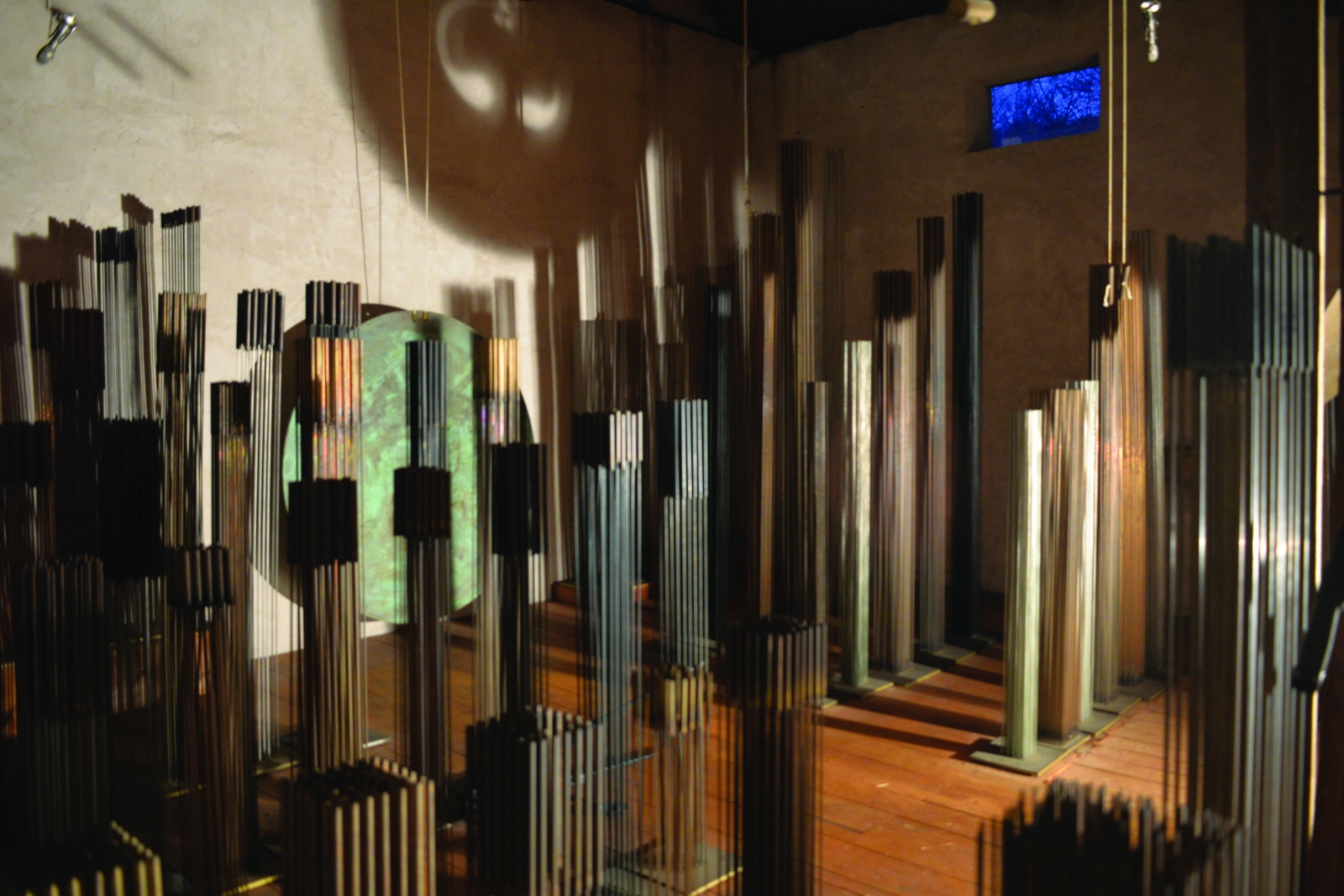