Beyond Aging in Place: Urban Studies Expert Deane Simpson on the Future of Retirement 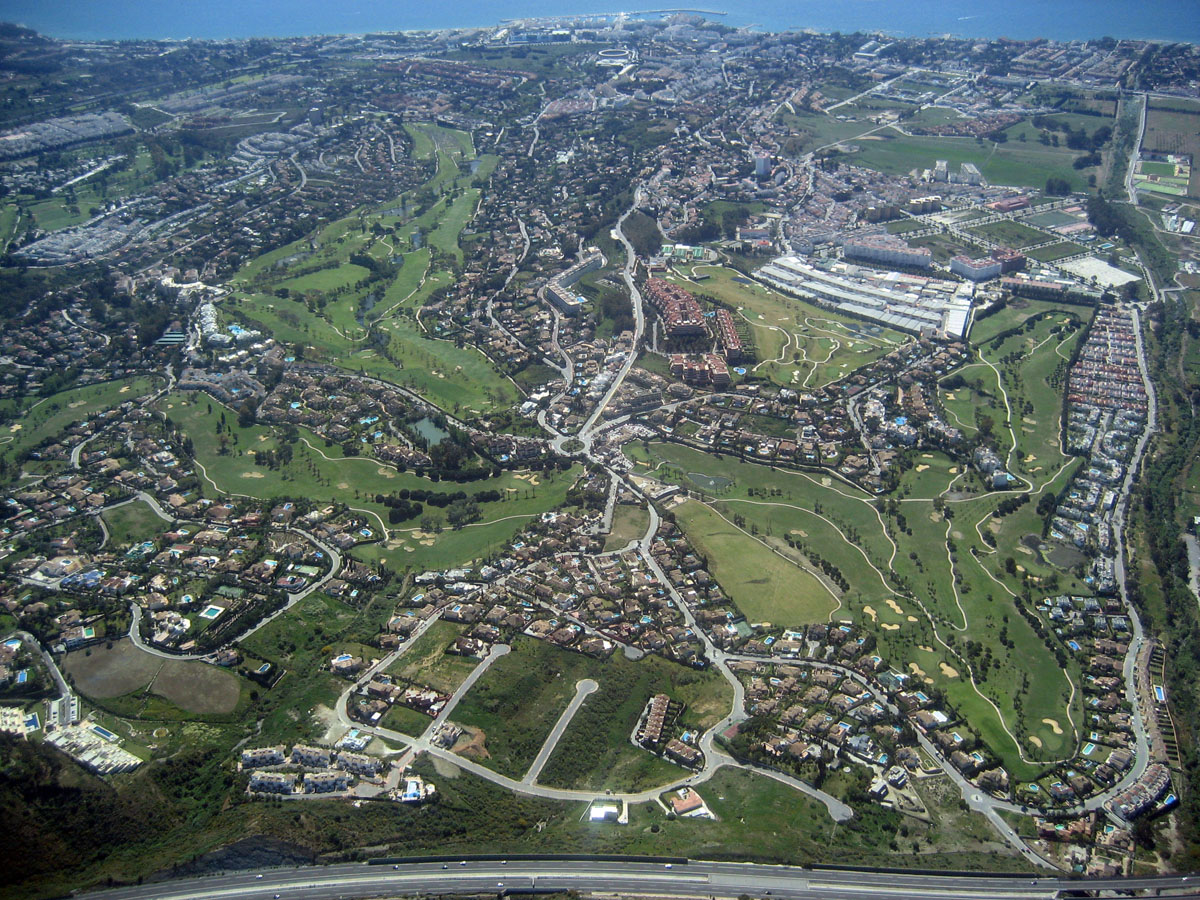 The contours of golf-course urbanization in Spain’s Costa del Sol, commonly referred to as “Europe’s retirement home.” The region, Simpson explains in his book, consists of three urban ecologies—the existing historical towns, tourist resorts, and developments like the one above, referred to as urbanizaciones, which are dominated by foreign retirement migrants.

How does society provide for the needs of those who have retired and newly entered the ranks of the aged? Based on his book, Young-Old: Urban Utopias of an Aging Society (Lars Müller, 2015), architect and urban studies expert Deane Simpson shares his critical perspectives on aging in place, the history of aging communities, and the future of retirement.

My starting point came from two researchers, Bernice Neugarten and Peter Laslett, who first characterized this age group with the idea of late freedom—from the responsibility of adulthood in terms of work and the responsibility of making a family. They bifurcated old age, forming this group of young-old people who are also free from the physical and mental limitations of the fourth (and final) age. It is a phase in life that’s hard to define. For us, it’s the post-retirement age group, but at each time in history it has been constituted by a different cohort, who have experienced quite different lives and cultural experiences—such as the baby boomer generation that is distinguished from the silent generation, in the American context. Old people are changing all the time.

Aging in Place versus Retirement Communities

I want to introduce nuances into a debate that has become black and white. Aging in place is an emerging orthodoxy that’s universally accepted and promoted. Retirement communities—from the perspective of planners or architects—are seen as a negative situation.

I would characterize my own relationship to retirement communities as a deep ambivalence. These types of young-old urbanism are an increasing fragmentation of our society, and I think of them as four-layered dystopias. The first layer would be the dystopia of segregation, which adds age to the existing forms of segregation based on income or race. The second is the dystopia of securitization, the third would be a dystopia of privatization, and the last one would be a dystopia of denial. I’m deeply critical of these environments, but it’s also important to acknowledge the emancipatory aspect of these urban settings. For example, they were based on the utopia of a vacation that never ends, but they are also a new job market. People who retire to the Villages in Florida end up having a second career, in some cases out of economic necessity, but in most cases for social interaction and to occupy themselves. There’s also a kind of liberation in examples like golf-cart infrastructure, which produces a peculiar intermediate between the automobile and the wheelchair. Or on the hospital strip in the Villages, where the negative, daunting image of the hospital is turned into a kind of shopping exercise.

Retirement is being challenged at an economic and cultural level—is it viable to take people at a certain age out of productivity and society in this way?
I’m generally supportive of the concept of aging in place, but the danger is to wholly accept it in an uncritical way. The support for the idea is linked to society’s recognition of people’s ownership of and attachment to a place, and their need for a familiar setting in relation to the challenges of aging. This is common sense. But there is a danger of over romanticizing the concept of place. When the average American moves his or her household 11.7 times in a lifetime, we have to be slightly more critical about their attachment to place.

Also, some types of urban or spatial organizations are much more appropriate than others to support aging in place. For example, suburbia is more challenging to aging in place, particularly in the last years of life when one has lost the ability to drive or the confidence to do it anymore.

In any case, this relationship between aging in place and the retirement community is not an either/or condition. Aging in place often produces naturally occurring retirement communities. In Denmark, postwar suburbs are occupied by families that moved into them in the very beginning, and many of those people have aged there. Now those areas are completely dominated by 70-year-olds.

Marketing to the Young-Old

You could say that Sun City, Arizona, marks the introduction of young-old urbanism as a lifestyle product. It had the clear strategy to shift away from selling housing to marketing a wider lifestyle, very specifically directed toward the needs and desires of this particular age group.

The notion of a lifestyle product has two aspects: spatial and temporal. The spatial component is the comprehensive environment for the consumption of leisure—you’re talking about clubhouses, golf courses, and commercial centers. The temporal aspect is the idea of designing programs and activities to discipline one’s time. When you bought into Sun City at the beginning, it was clear there was a time-based program of activities and club life that would effectively discipline your life and avoid any danger of boredom. This has been developed over the years into a more sophisticated lifestyle product in the case of the Villages. 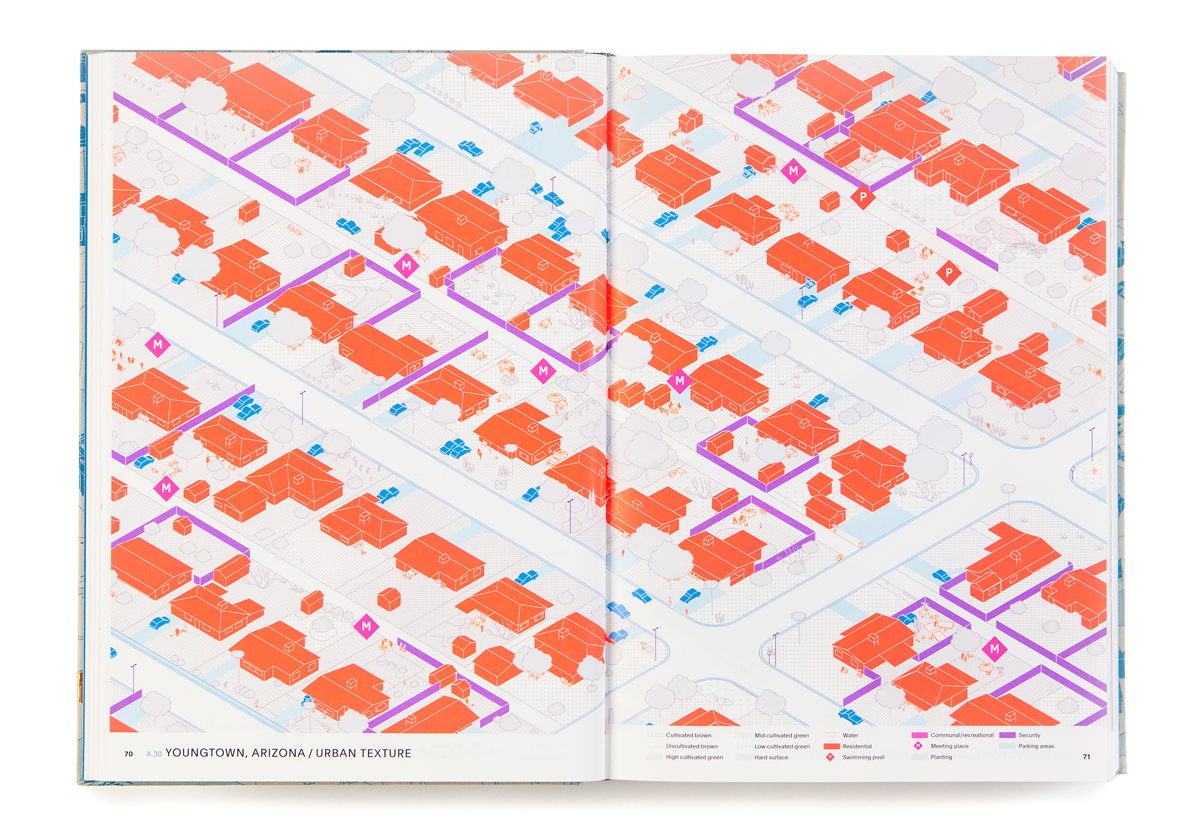 Designed by Studio Joost Grootens, Young-Old contains a number of analytical charts, illustrations, and maps, as well as urban texture studies by students at Bergen School of Architecture. This one analyzes the urban components of Youngtown, Arizona, which was founded in 1954 and became the first age-segregated retirement community.

Only for the Rich?

The book frames how the market responded to the emergence of this group of young-old in the second half of the 20th century and the beginning of this century. Many of the examples come across as addressing different levels of affluence. The earlier visions of Sun City, for example, were very much about an inexpensive retirement for those who were retiring only on Social Security benefits. But those developers quite quickly realized that the greater profit margins were in developing for the affluent.

The recreational vehicle (RV) community, on the other hand, is quite mixed—many of these people are not affluent. People are traveling long distances, staying for several weeks in one location, and then going to another place where they’d stay with their children and grandchildren, driving around in simple and small RVs. Interestingly, in the Villages in Florida, the early areas were sectored for mobile homes or trailer homes.

Retirees on the Road

In the book, I write about the RV community in terms of what I call compensatory domesticity. According to Canadian anthropologists who spent a lot of time in this community, there are two to three million American retirees who give up their homes and live year-round in these vehicles.

Giving up one’s home and being a kind of permanent nomad produces a kind of counterreaction. There’s an exaggerated domesticity that takes place in the interior of the vehicles, but also in the way that the immediate sites are colonized around the vehicles. Many of the tropes of the American middle class interior are replicated through furniture, interior surfaces, and ornamentation. The exterior plot of a suburban house also plays out here—from the extended veranda that comes out of the side of the RV to the placement of deck chairs and artificial lawns.

What’s also interesting is the downsizing: In this process of moving out of one’s home and into the RV , one is forced to reduce the amount of stuff one has. But on the outside of the vehicle, there are all kinds of incredible lawn ornaments, garden gnomes, neon palm trees, and wind decorations—it’s an extraordinary obsession with kitsch. 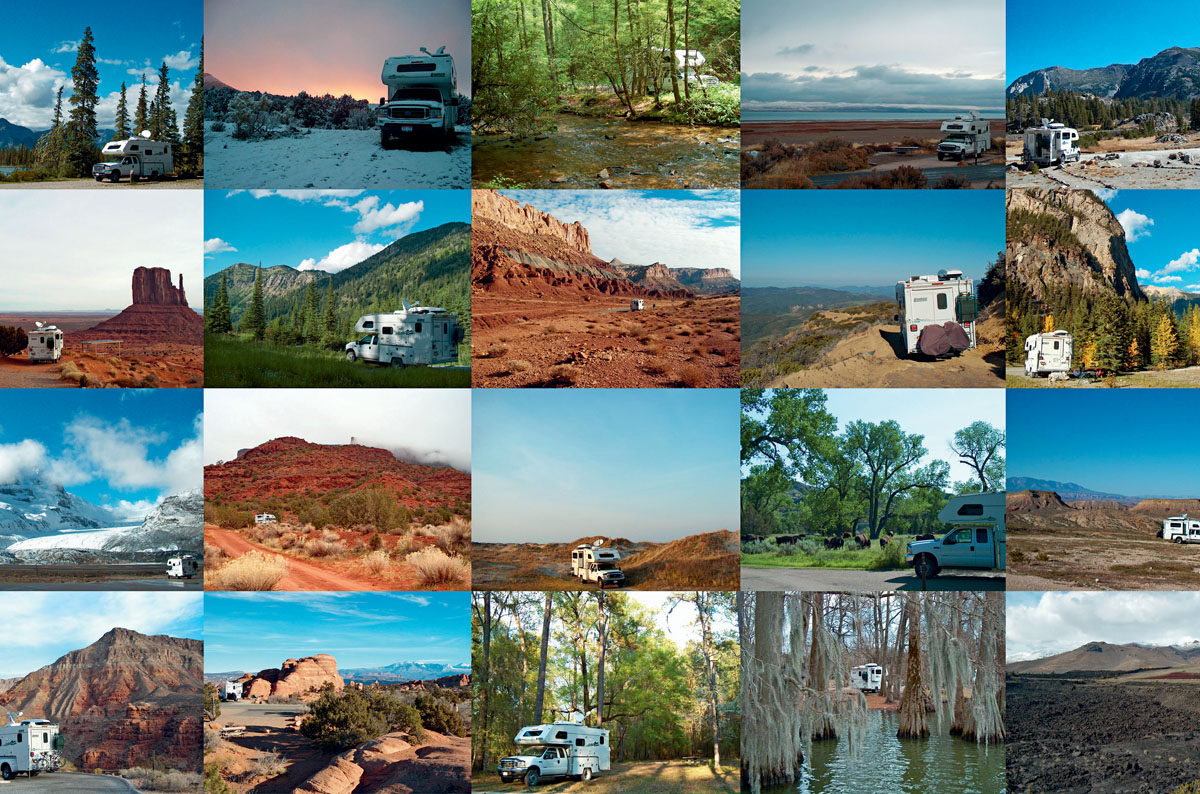 The Senior Recreational Vehicle Community (SRVC) in the United States has around two to three million members, who lead a nomadic lifestyle. These images of nature belie both the urban and networked nature of the SRVC—members gather at camping sites and form RV clubs that are coordinated online. Calling these communities “Technological Arcadia,” Simpson writes: “Perhaps the strongest historical resonance exists between the SRVC and the projected spatial visions of the 1960s and 1970s architectural avant-garde, such as Superstudio and Archigram.”

The cruise ship industry today functions as a sort of retirement community. It is exploited or used by this age group—one can think of it as a kind of extended mobile network of the young-old.

Other examples that are starting to emerge are smaller communities focused on niche lifestyles, interests, activities, or even previous careers. For example, there are retirement communities for university faculties, or small communities that are themed around artistic exploration late in life.

The Future of Retirement

There’s been a general discussion in the last decade or so about how baby boomers will want and produce and occupy different environments or lifestyles. That’s a meta-narrative around this generation that should not be accepted uncritically, because it’s not just about the nature of the baby-boomer generation but also about events that are taking place regarding, let’s say, the viability of retirement as an institution.

So I think it’s a much more complex thing than saying that the baby boomers will reach their late freedoms and want to realize all of their youthful ambitions. It is about the challenge to retirement. You no longer entirely stop working at the age of 65, so increasingly you will see five or ten different ways in which retirement can take place. My general sense is that there’ll be more individualized forms of retirement and ways of living. 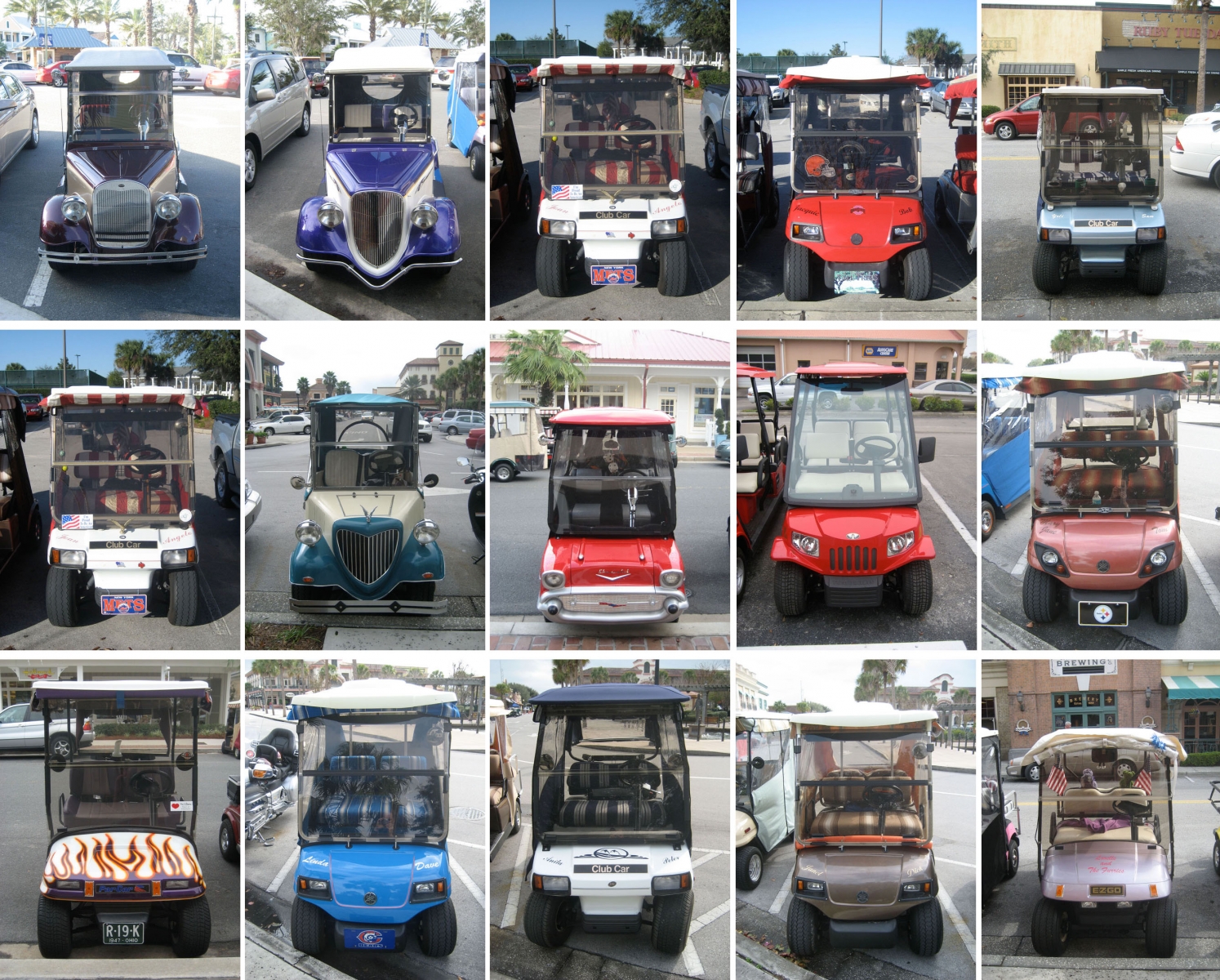 Residents of the Villages in Florida use golf carts as a solution for urban mobility, and a new form of transportation infrastructure has sprung up around them: “A peculiar intermediate between the logic of the automobile and the wheelchair,” Simpson says. Residents take great pride in customizing their golf carts—these examples were recorded in 2008.