A probing exhibition at the Canadian Centre for Architecture mines an alternative definition of “architecture.” 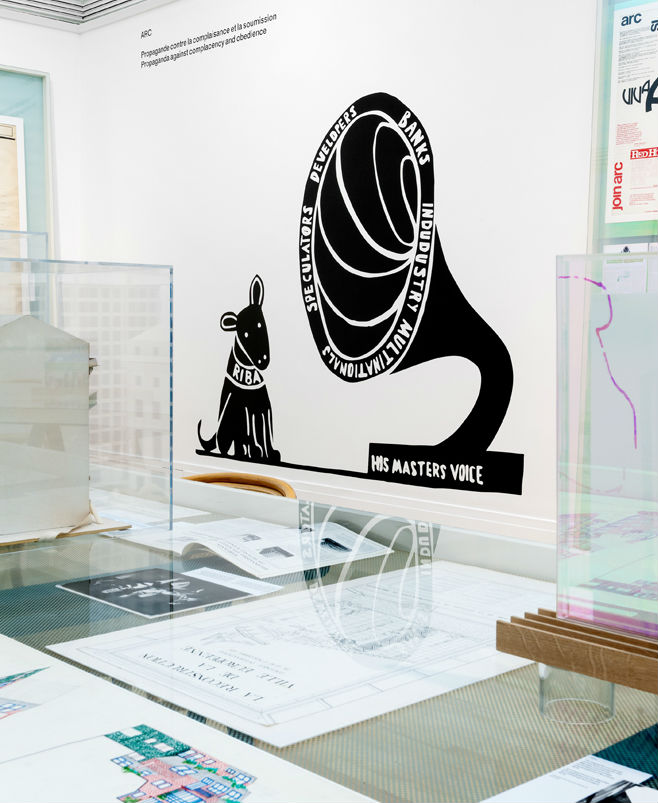 Curated by Giovanna Borasi, The Other Architect examines 23 alternative design practices spanning the countercultural era to the present. The Architects’ Revolutionary Council (pictured) was the most radical of these and used graphic and rhetorical devices taken from the revolutionary groups of the time.

“Everything is architecture,” mused Hans Hollein in the pages of Bau, the Austrian architectural journal that Hollein and his avant-garde friends took over in the mid-1960s. Emboldened by a litany of vivid, uncanny visuals, Hollein contended that virtually all observable phenomena, and certainly all human production, could be swept under the heading of architecture. But, paradoxically, with every flippant image, Hollein pummeled all meaning out of the word.

Hollein and his Bau co-conspirators were part of a generation of designers in the 1960s who were “moving away from the norm and inventing ways that architecture can construct a cultural agenda,” writes curator Giovanna Borasi in the catalogue of The Other Architect, the ongoing exhibition at Montreal’s Canadian Centre for Architecture (CCA). Borasi has assembled 23 case studies in the CCA’s central gallery, each relating to a different design practice and nearly all unbothered by the seeming contradiction of an architecture without buildings. With no visual timeline in place, these are loosely collected in thematic groupings that tend to vary dramatically, from the more customary offshoots (a conference series, a para-institutional education center) to more offbeat inclusions (a clinic, a bus tour, a human-rights agency).

While Hollein doesn’t directly feature among Borasi’s motley gang of outsider architects, his rejection of disciplinary mores had much in common with them. For instance, Hollein closed his 1968 manifesto with an apostolic claim: “All are architects.” Somewhat contemporaneously, Nicholas Negroponte, a professor at MIT and founder of the Architecture Machine Group, imagined an imminent future when “the proverbial man-on-the-street” would be his own architect. By interfacing with a personal computer, this spatially conscious everyman would be capable of radically altering or fine-tuning his environment to his needs.

In this relativist climate, if everyone is an architect, then an architect can be anyone. Since the Renaissance, the greatest builders have believed themselves to be artists; with the advent of Modernism, this occupational profile became diversified, integrating elements of the natural and applied sciences for objectivity’s sake. By the 1960s, a decade defined by upheavals of all kinds, the mold was shattered. Cross-pollinating influences entered the profession, and sociologists, psychologists, cyberneticists, media theorists, communists, conceptual artists, and even graphic novelists exerted an incredible pull on the imagination of young architects.

To embrace any of these indiscriminately, however, would land you in a fog of indecision. One example of this was Global Tools, the mostly northern Italian salon made up of designers Alessandro Mendini, Ettore Sottsass, and members of Archizoom, among others. Their exact activities are hard to pin down, but involved teaching workshops meant “to stimulate the free development of individual creativity,” even if that meant “reverting to a nomadic way of life.” It was an inadequate, and often incoherent, critique of life under oppressive bureaucratic structures. The ship-bound Delos Symposion, meanwhile, ironically imitated these same structures. Chaired by architect Constantinos A. Doxiadis, and modeled on CIAM’s legendary 1933 Athens Charter cruise, the weeklong conference on the Aegean was open to invited guests only, and daily bulletins outlined the proceedings by the hour. In keeping with the organizers’ claims to informality—the Greek word symposion was used to avoid the stodgy connotations of the Latin symposium—the rules didn’t govern the presentations or debate but, rather, pertained to recreational activities. Points of discussion were meant to be hashed out over rounds of ouzo, while three-fourths of the voyage was devoted to swimming, leisurely meals, and stopovers on various Greek islands. 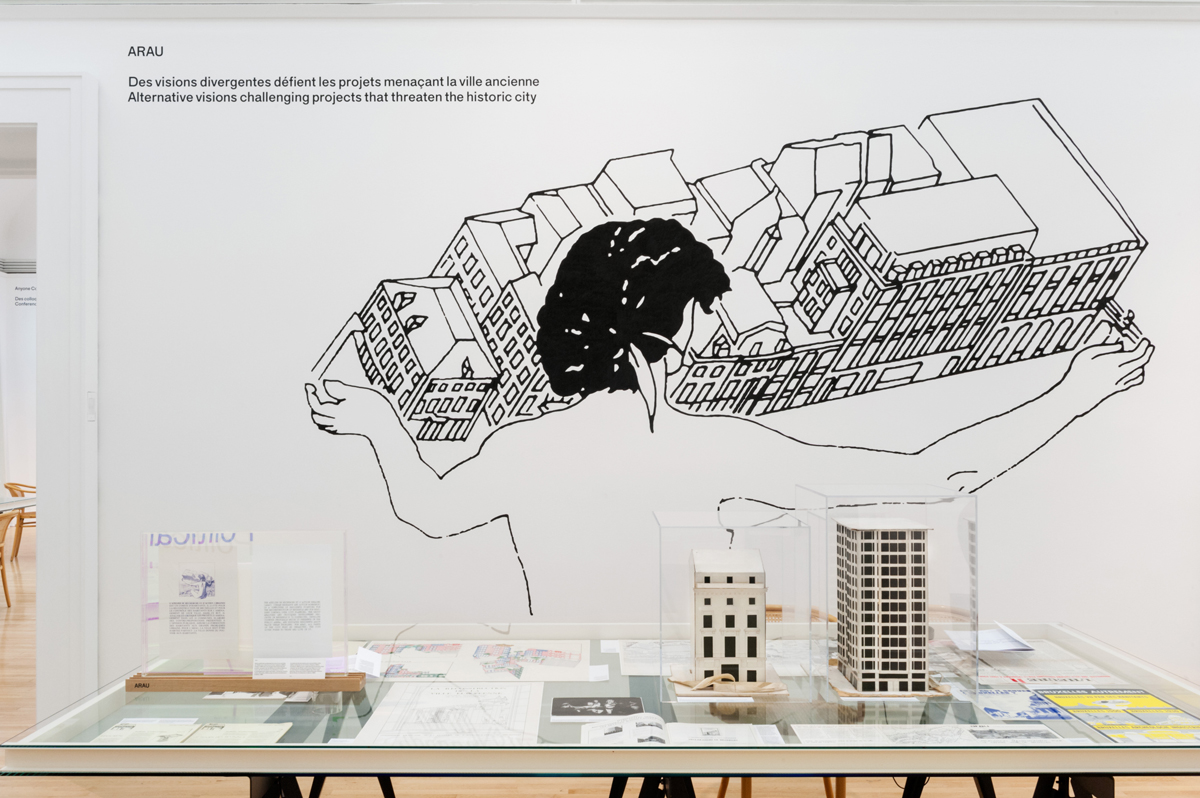 The Atelier de Recherche et d’ Action Urbaines (ARAU) was formed in reaction to the brazen city planning projects that drastically altered the urban fabric of Brussels in the 1960s. The group developed the idea of the “counter proposal,” a kind of protest through drawing; architects such as Leon Krier would devise alternative schemes to impending developments based on the input of local working-class people.

These are the kinds of chestnuts that quicken the pulse of the historian or architecture-phile—less so the average visitor—and there are many of them in the exhibition. Rarely are they easily given up, though, instead requiring close reading of the scores of letters, memos, flowcharts, mission statements, grant proposals, and budget lists that compose the show’s content. The materials make for a departure from the typical architectural exhibition, which relies on the visual dynamo provided by outsize building models and curatorial hand-holding through timelines and didactic wall texts.

Tropes such as these are front-loaded in The Other Architect, which opens with a caveat in the form of one very large-scale model—built by OMA’s Rotterdam office in the mid-1990s for the firm’s belabored Universal Studios project. One could spend a considerable amount of time investigating the immense maquette before heading into the galleries. As the introductory text, stamped on towering panes of glass, warns, “[Herein] architecture is no longer understood as a practice that inevitably brings about the construction of an artifact.” It’s a line in the sand: architects beware, no buildings lie beyond this point.

Borasi, who was named CCA’s chief curator in 2004, mostly holds true to this disclaimer. They do, however, fall into the trap of the name game from time to time. For an exhibition premised on architects working at the fringes of traditional practice, and on the privileging of the collective endeavor over the Roarkian individual, the same familiar figures often crop up. The entrance gallery is overly representative of such personalities, including Rem Koolhaas, whose Lost in La Mancha moment regarding the failed Universal Studios proposal led to AMO’s founding in 1999; Charles Moore and his involvement with UCLA’s Urban Innovations Group; and Peter Eisenman, the leader of the Institute for Architectural and Urban Studies sandlot.

In this relativist climate, if everyone is an architect, then an architect can be anyone.

Perhaps only British architect Cedric Price looms larger, not just in terms of gallery coverage but also in spirit. For architects (and, for several years now, dabbling art curators), Price has become the patron saint of the mobile, the reconfigurable, the network, the ever changing—a designer of process rather than buildings. His celebrated 1961 Fun Palace project was a structural armature for open-ended social scenarios, with operable floors and pop-up enclosures. He also provided the impetus of the AD/AA/Polyark, which was the Magical Mystery Tour applied to architectural school, with students traveling in a modified double-decker bus and dropping in at various U.K. universities. If you’re wondering what the other architect of the exhibition’s title looks like, they would resemble someone like Price.

That said, several of Borasi’s most compelling characters actually have little in common with Price, sharing neither his cigar-wielding manner nor his enduring faith in the ephemeral. There is Chad Floyd, an American architect–turned–public-television host of the limited Design-A-Thon series, which enlisted the public’s aid in arriving at sound urban proposals through an exciting new interactive medium. Across the way, an interloping Oswald Matthias Ungers and his economist wife, Liselotte, from Germany, hang with several communers living in the more than 2,000 settlements in America at the apex of the countercultural movement. (A few proved enduring, but most rested on a fragile harmony, which, as Adorno wrote, was necessarily “pressure-born and brittle.”) The Architectural Detective Agency of Japan, whose members disguised themselves as maintenance workers in order to freely document Tokyo’s streetscapes, brought a bit of Situationist élan to the straightforward task of survey work.

Few of the case studies are as explicitly political (never mind radical) as the Architects’ Revolutionary Council (ARC), formed in 1974 by Brian Anson, a lecturer at London’s Architectural Association. Remembered for its lobbying for the abolition of the Royal Institute of British Architects, ARC was a belated outgrowth of the New Left. These weren’t anti-architects so much as self-criticizing architects. Silly as they were, they were reacting against their navel-gazing predecessors—Modernist masters like Carlo Scarpa, who, marooned by the 1968 student riots in Venice, condemned the lettering on the placards he saw.

Thematically, the exhibition has its twists and turns, but it repeatedly returns to a few core ideas. Architects, though they have forgotten the fact, are in the end answerable to the public and should work on its behalf. As it happens, their practice lies at the confluence of multiple disciplines, and it would be to their detriment to surrender this tactical ground by focusing solely on construction. Finally, architecture is bigger than buildings in the same way the city is; it concerns the production and dissemination of knowledge as much as it does embodied energy. There is a tendency to push that course too far. The conviction that everything is architecture can itself be counterproductive.

Whatever the power of Hollein’s declaration, he, like many of the other architects in this excellent exhibition, had a framework that was principally cultural. Faced with the inequities of contemporary life, that no longer seems to be enough.

The Other Architect will be exhibited at Columbia University’s Arthur Ross Architecture Gallery from September 16, 2016 to December 2, 2016. 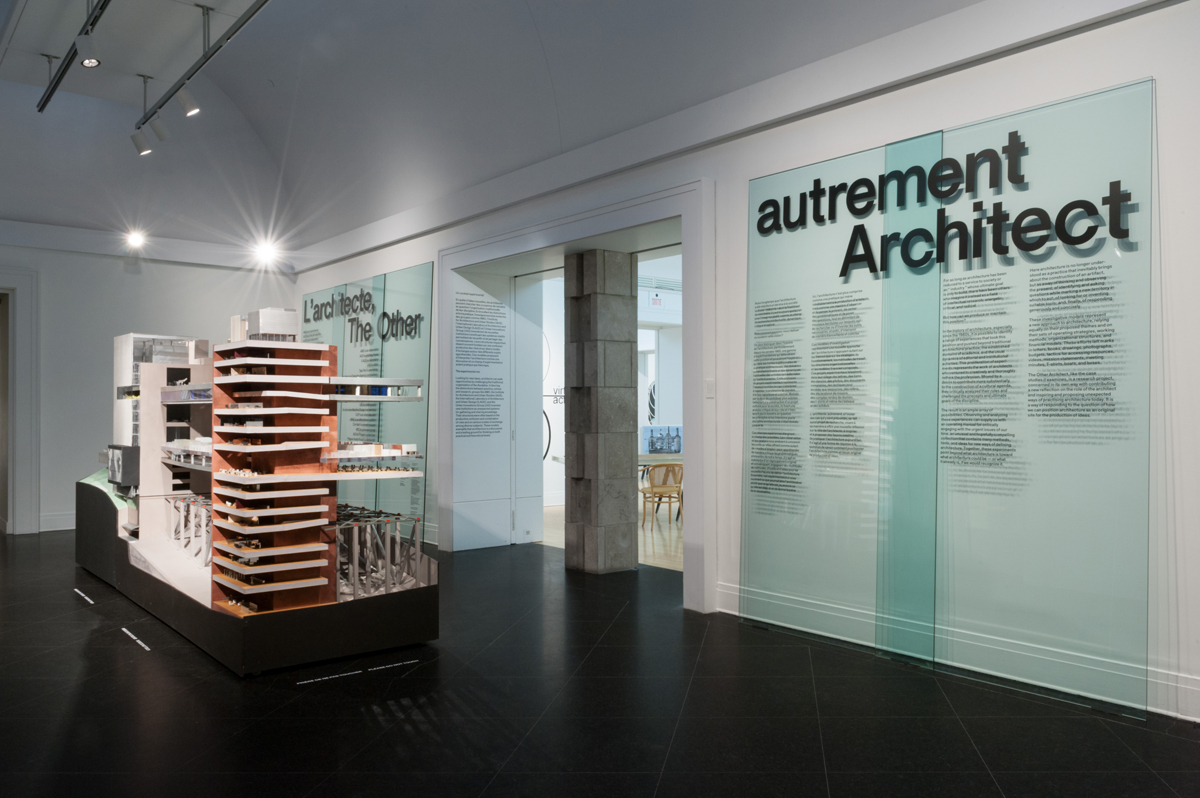 A large model, made by OMA for their Universal Studios project, is positioned at the entrance of the exhibition. 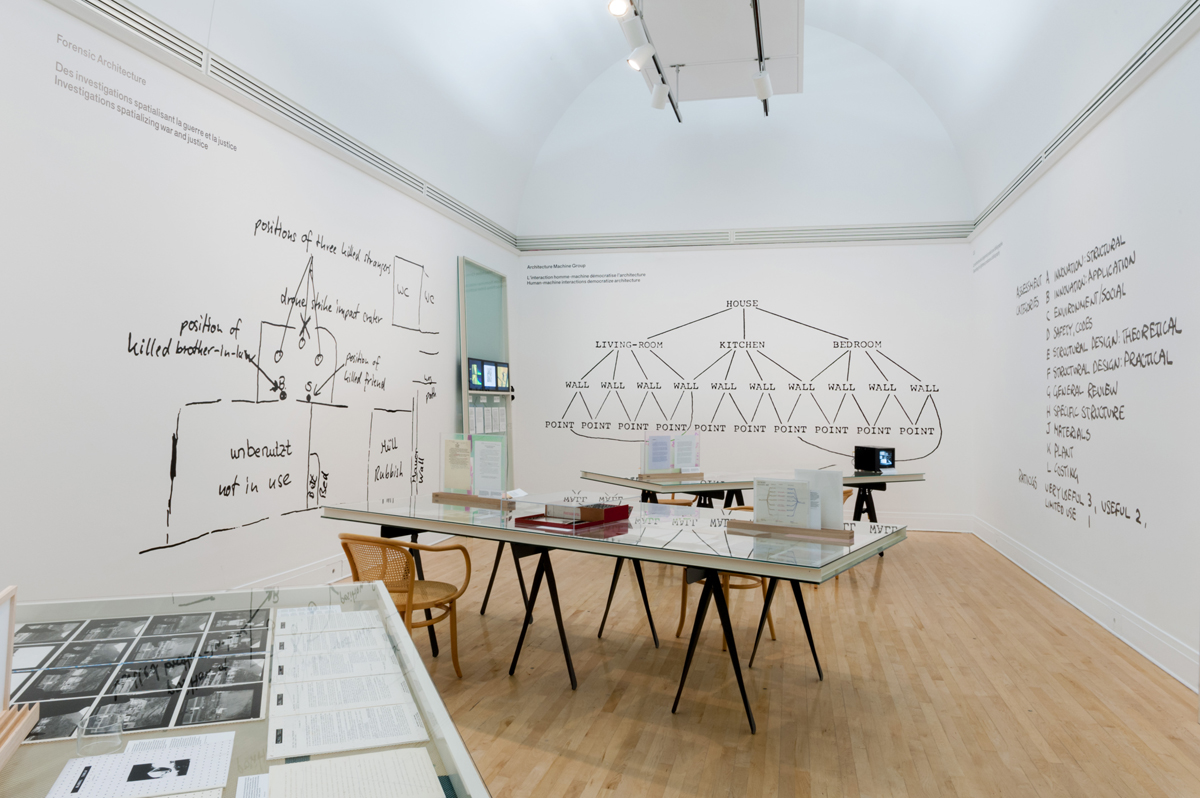 The documents on display rest under glass and are spread across the length of a table, each one devoted to a different group (opposite). Designed by MOS Architects, the table’s construction strikes a certain industrial elegance that is intriguingly offset by wooden Thonet chairs (sourced from the CCA’s scholar room). 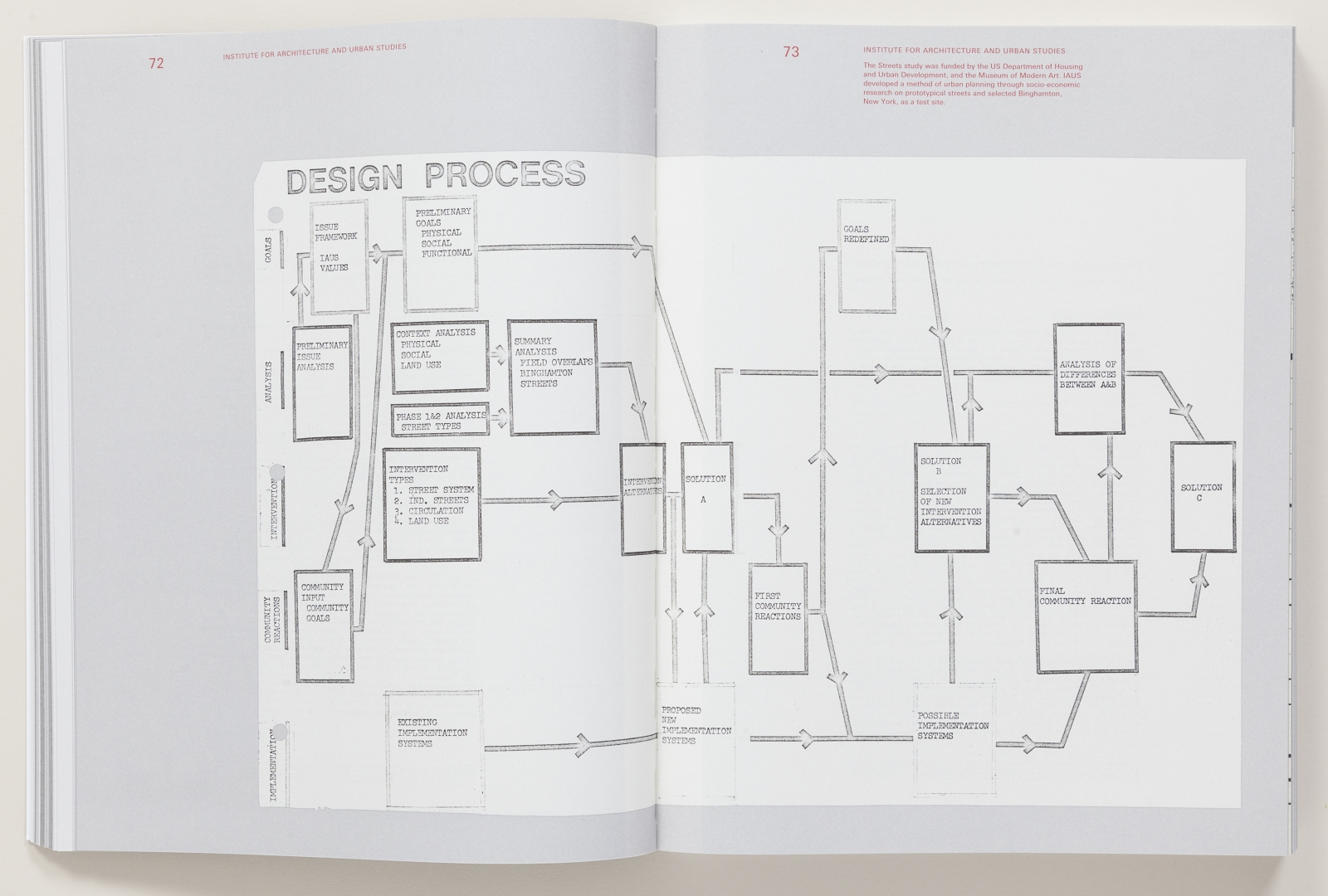 The show’s materials consist of letters, mission statements, budget lists, and other ephemera, nearly all culled from the CCA’s unparalleled archives. Pictured: A 1971 organizational flow-chart prepared by the Institute for Architecture and Urban Studies plots the different stages of the group’s information-gathering process for a study on streets done that same year. (The exhibition catalogue, from which this spread is taken, was published by Spector Books.) 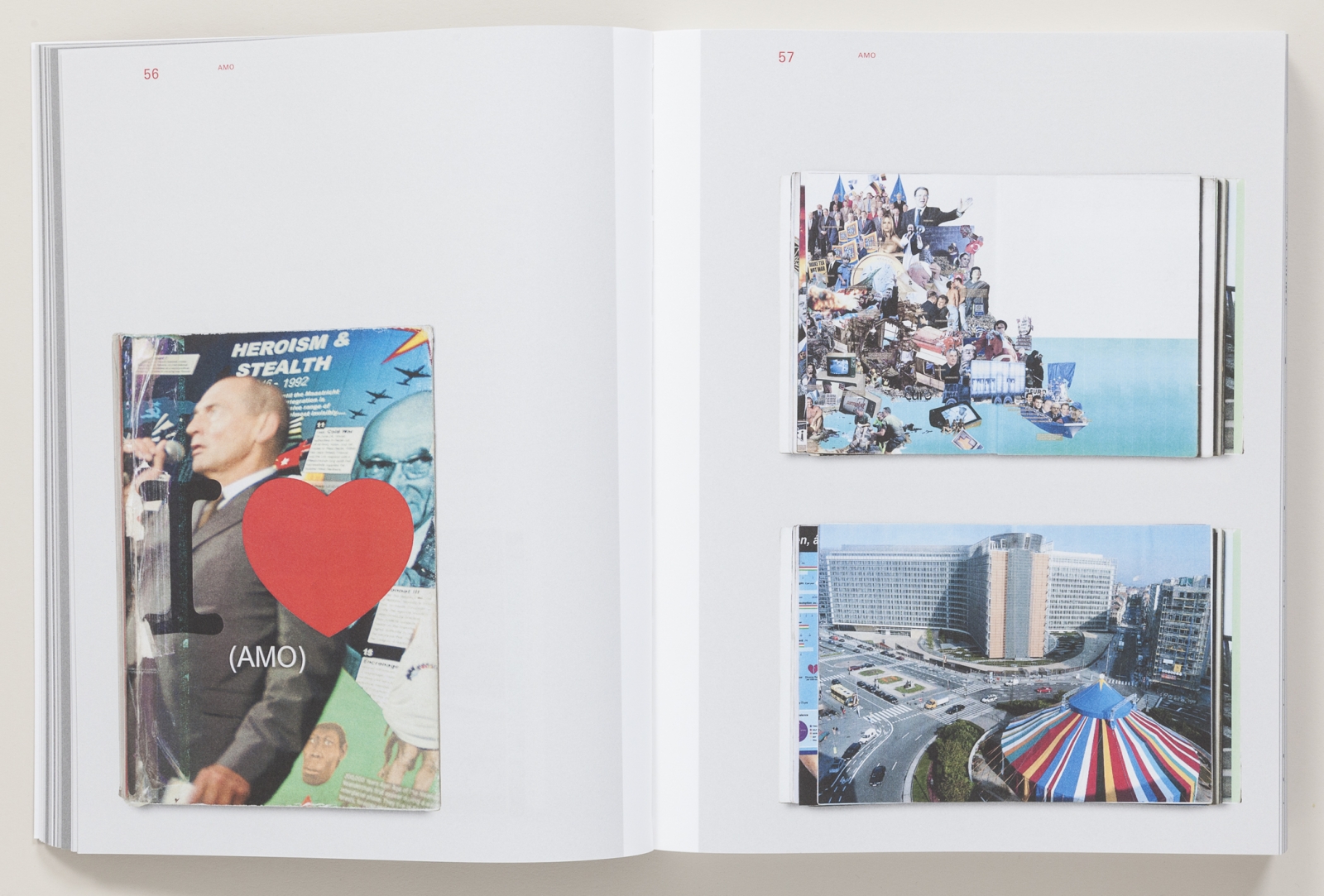 The cover of AMO’s unpublished book I Love EU, which is based on the group’s 2004 The Image of Europe exhibition. 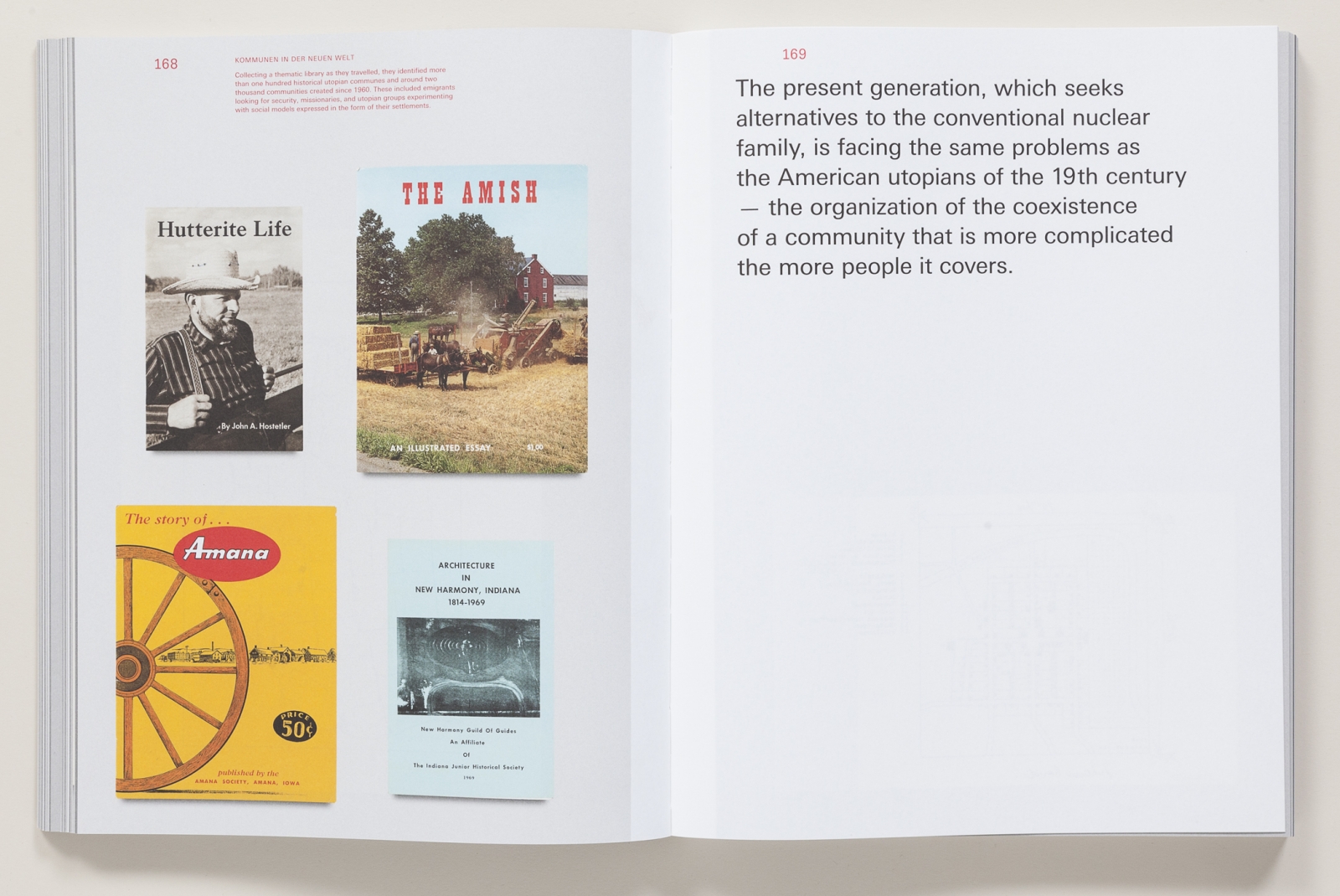 In essays and other publications, the German architect Oswald Matthias Ungers and his economist wife, Liselotte, documented America’s countercultural settlements. 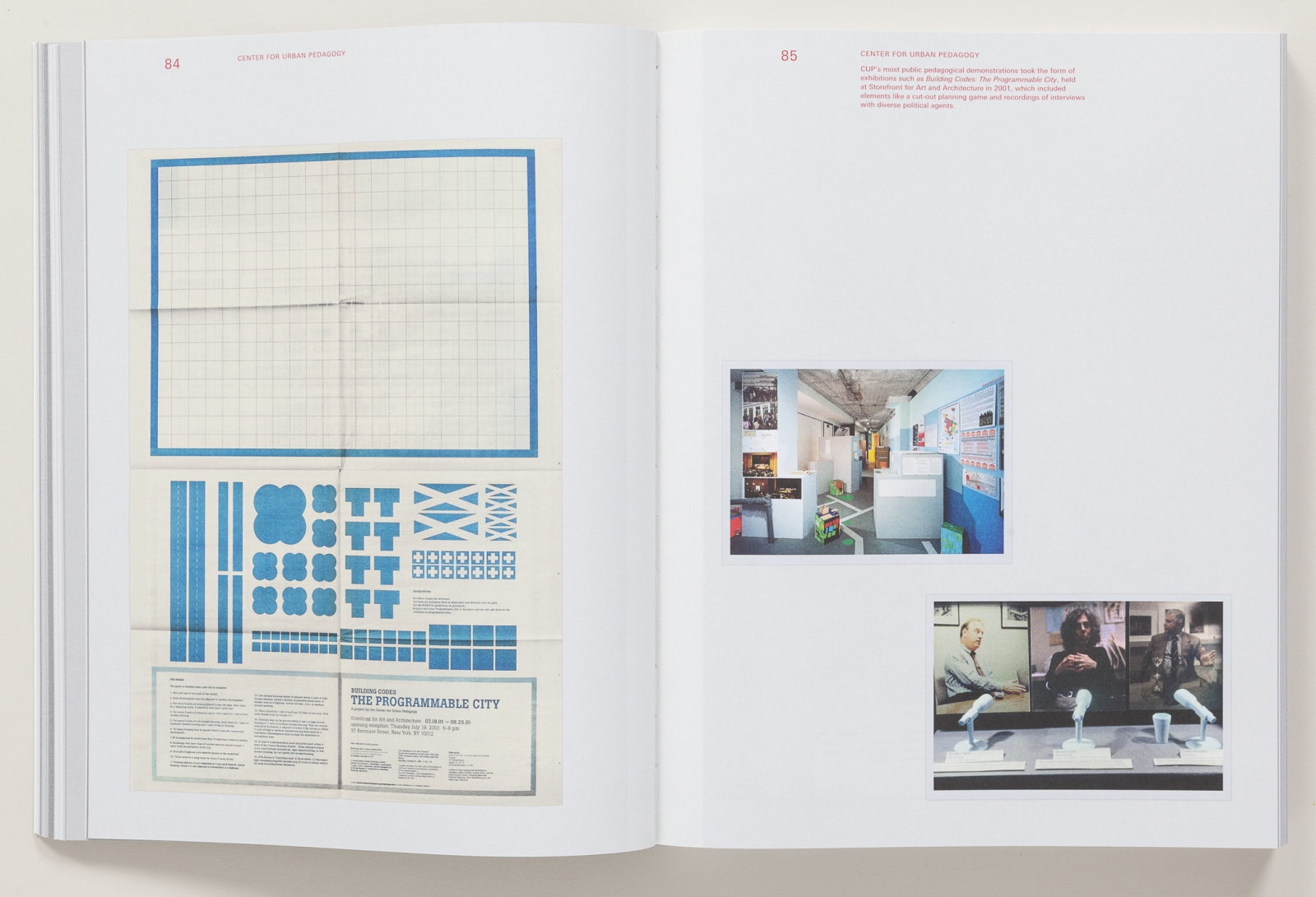 Among its early activities, New York’s Center for Urban Pedagogy planned small exhibitions that broke down urban planning protocols into interactive exercises. For the group’s 2001 show Building Codes: The Programmable City, cut-out broadsheets (pictured) were distributed to visitors, inviting them to play with zoning elements. 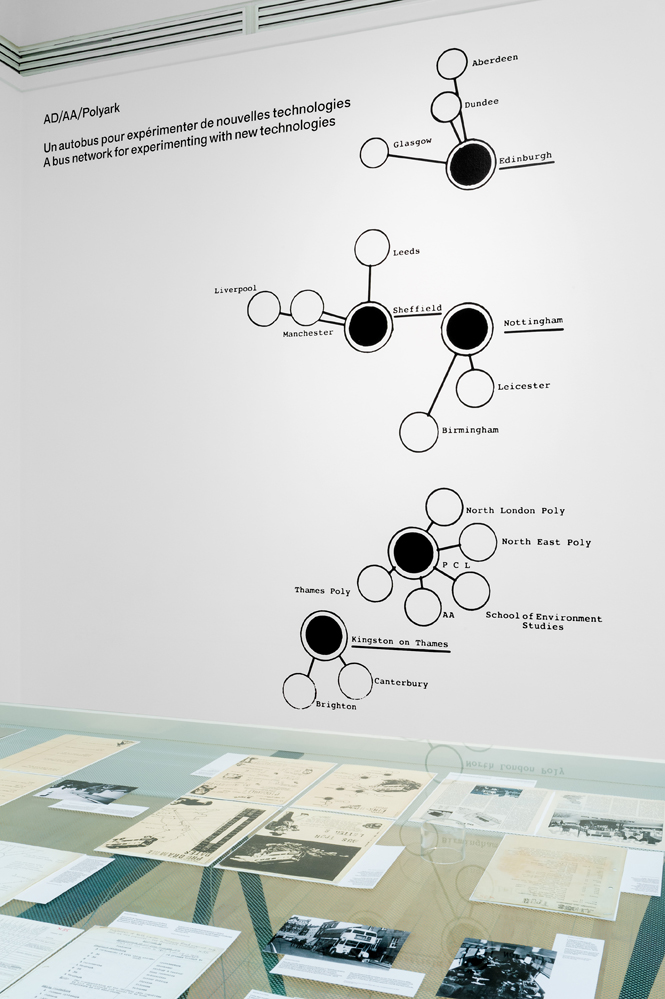 Architect Cedric Price provided the impetus of the AD/AA/Polyark, which was the Magical Mystery Tour applied to architectural school, with students traveling in a modified double-decker bus and dropping in at various U.K. universities.