Can the “LEGO Movie” Inspire Us to Survive Climate Change?

The surprisingly good LEGO Movie points to a future when improvisation might be the key to planetary survival.

Illustration by Adam Lucas; made with LEGO font by lineto.

Humans have a lot of great qualities; following detailed instructions does not appear to be one of them. There’s apparently enough ambiguity in the ancient commandment “Thou shalt not kill” to justify centuries of war, murder, and genocide. Our capacity to ignore the warning about soiling the place where you sleep is sufficient to produce degradation that scientists believe will eventually cause irreversible mass extinction of life on Earth. The apparent human preference for denial over rational self-interest, or open-ended democracy over rigid dictatorship, entrepreneurship and innovation over conformity, ditching the rules in favor of adaptation and finding one’s own path—these form the mix of ingredients for the rich chaos we call civilization. No set of instructions, no answer at the “help desk.” We’re on our own.

And yet our political institutions look at something like climate change with a curious all-or-nothing approach. Scientists issue instructions for meeting strict targets to reduce pollution levels to limits we began to exceed decades ago. The developed world fights with the emerging markets about who is responsible. Environmentalists call for severe curtailment of industrial activity by mobilizing an unprecedented level of international cooperation under threat of a doomsday scenario, while deniers argue that the entire matter can be ignored or debated indefinitely without ever coming to a conclusion or taking action.

I am solidly in the camp of believers in relation to human environmental impact, and regard climate denial politics as a cynical and dangerous embrace of ignorance. But I’m also surprised that there is no intermediate pragmatic position on how to move forward. Why is there little or no call for mobilizing human activity to adapt to a changed climate? To pretend that global energy demand isn’t rising, or that the population is two or six billion less than what we know it to be, seems inflexible or simply daft—especially when adaptation is so clearly an impulse that humans seem to possess. (We survived the Ice Age, right?) What else explains the messy success of civilization? If we’re good at anything, it is making the best of available resources.

This adapt-or-die principle seems to be at the heart of the implausibly successful LEGO Movie, with the catchy theme song “Everything Is Awesome,” which just passed an awesome $400 million in gross global box office revenue. A contemporary fable of design, civilization, and architecture starring Will Ferrell—along with that notorious environment degrader, plastic—it might actually hold a key insight into human survival. That is truly awesome for a movie that I presumed would be about as pleasant as navigating over a pile of my kids’ LEGO on the way to the bathroom in the dark. But everyone adapts, even dads—that’s the new LEGO morality here.

A still from LEGO Movie

My assumption was that this commercial blockbuster would be just another parent-killing two-hour 3-D ritual of carefully sequenced pop culture references, fart jokes, and reminders that it’s okay to live for your dreams. Family movies have become as scripted as a Sunday church service. Disney, the veteran in this genre, is the high-mass confident Catholic, while preachy Dreamworks is more cloyingly Methodist, Blue Sky of the Ice Age franchise is back-to-basics Baptist, and Pixar leans solidly Unitarian. But LEGO Movie, produced by an Australian animation outfit called Animal Logic, fits no denomination. Sure, there’s an orgy of product placements and a reluctant little plastic messiah dude who saves the world, but at its core is this idea: “Forget the instructions. You can build whatever you want.” That’s not simply new ground—it’s modern LEGO heresy.

As a late Boomer, I was among the first generation to make the childhood jump from playing with toys based on real-world building materials, to the more abstract LEGO concept not tied to an architectural model. I grew up in the 1960s, so the classic wooden blocks, the steel-frame-based Erector Set with real metal pieces and hundreds of nuts and bolts, and the Kenner Girder and Panel Set with realistic plastic I-beams and bridge pieces, all gave way to the different kind of fun one could have with LEGO.

Because of the quasi-liquid properties of a thermoplastic developed for the military to enable the production of synthetic rubber tires, a new kind of play was born. Properly shaped pieces of acrylonitrile butadiene styrene, or ABS, could be compressed and made to hold together with friction and then detached over and over again without any deterioration in their structure. (Wooden Tinkertoys also had this property, but were much more limited than LEGO.)

LEGO began as structural bricks, but long ago gave way to an infinitely diverse array of pieces and possibilities. Today’s LEGO pieces don’t represent anything architectural. Instead, they interact in a more rudimentary way, like pixels or even molecules. In commenting on the movie, LEGO’s brand relations director Michael McNally told reporter David Pierce of The Verge, “I think what we’ve really found is that LEGO is a medium.”

The kids of my era needed no brand relations director to discover this. Playing with LEGO was always like adopting a medium as an artist might work in watercolor or clay. With LEGO, you could make exotic vehicles, buildings, and creatures with no ties in the real world. I was never building with LEGO as much as working with it.

By the time my children were old enough to play with it, I found myself disheartened to see a radical evolution of the LEGO concept.

By the time my twenty-first-century children were old enough to play with it, I found myself disheartened to see a radical evolution of the LEGO concept. The canonical sets designed for open-ended play had given way to very representational  (and far more expensive) models. At the top end, one could buy an Eiffel Tower for $200, or a Taj Mahal for $300. There was everything from versions of Star Wars spaceships (a Millennium Falcon went for $500, with collectors’ editions fetching up to $4,000), to the vastly more affordable NASA Mars Science Laboratory Curiosity Rover, which I actually built with my daughter Olivia. 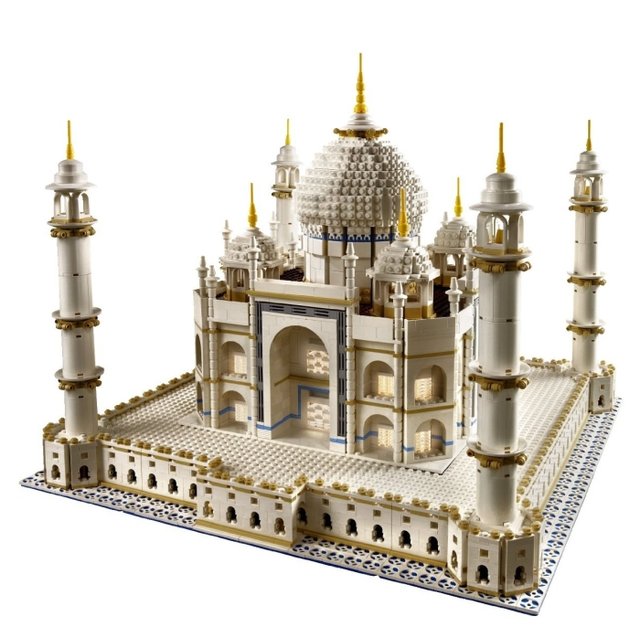 The LEGO “Creator” Series includes a pixellated version of landmark structures like the Taj Mahal. The bespoke set is indicative of LEGO’s departure from its more resourceful roots.

These sets were fun to construct, but they came with very detailed instructions. Deviations were not tolerated and the fully assembled kits were more appropriately displayed like museum pieces. They were far too fragile for the stresses of real imaginative play. This seemed to be the opposite of the original LEGO idea. As my (brilliant, right?) children put their assembled LEGO kits on shelves, more trophies than toys, I kept my reservations to myself. What could I say? LEGO had become a sponsor at the MIT Media Lab and a symbol of the resurgence of science and technology. Its robotics and educational initiatives were a parade you rained on at your peril. But LEGO seemed to have abandoned open-ended play for a more directed, instruction-driven product. And the numbers showed that it was undoubtedly a good business decision.

In silence, I agreed to give over a huge chunk of a winter Saturday to bring the whole family to the church of the unholy (and expensive) popcorn to watch toys from my own childhood come alive on-screen. To my surprise, the movie not only addressed my uneasiness about the proliferation of instructions, but it made a hero out of the little kid who defeats the Kragel (Krazy Glue), perhaps the most inventive product placement in the history of movies, wielded by the inflexible instruction-obsessed dad (Ferrell).

This was a very optimistic message delivered in an emotional ending. LEGO sets are not trophies or 3-D jigsaw puzzles, we learned; they are what you can make with the pieces in your box and the ideas in your heart. Forget the instructions—here was a sophisticated critique of what has been the LEGO business model for decades, disguised as a $400 million blockbuster movie arguing that we humans might actually be able to adapt in the planetary game by putting the Krazy Glue back in the drawer, ditching the instructions, and working with the earth as we find it. This will not be painless, but at least adaptation is something humans have a track record of excelling at.

LEGO sets are not trophies or 3-D jigsaw puzzles, we learned; they are what you can make with the pieces in your box and the ideas in your heart.

A published paper by environmental and civil engineers and scientists at Stanford University and the University of Delaware, which found its way to me shortly after my LEGO epiphany, seemed to reinforce this belief. The team had constructed a computer simulation that took wind turbines collected like little units of energy—78,000 of them, placed off the coast—to suck the energy out of the storms and capture that energy to replace fossil fuels. Wind turbines like LEGO blocks built into a storm-protector power grid. It could actually work, the researchers argued, and would cost about as much as the more recognizable urban storm walls, the instructions for which are already on the drawing boards from Brooklyn to Tokyo. Is the idea of a turbine farm the size of Connecticut in the ocean, simultaneously saving the world from global warming and super storms, any more outlandish than a swirling mass of garbage in the Pacific twice the size of Texas that shows we can’t get our act together? I think I know which is more awesome.