Despite its dazzling, hyperbolic rhetoric, the third Istanbul Design Biennial largely delivers on its assertions. 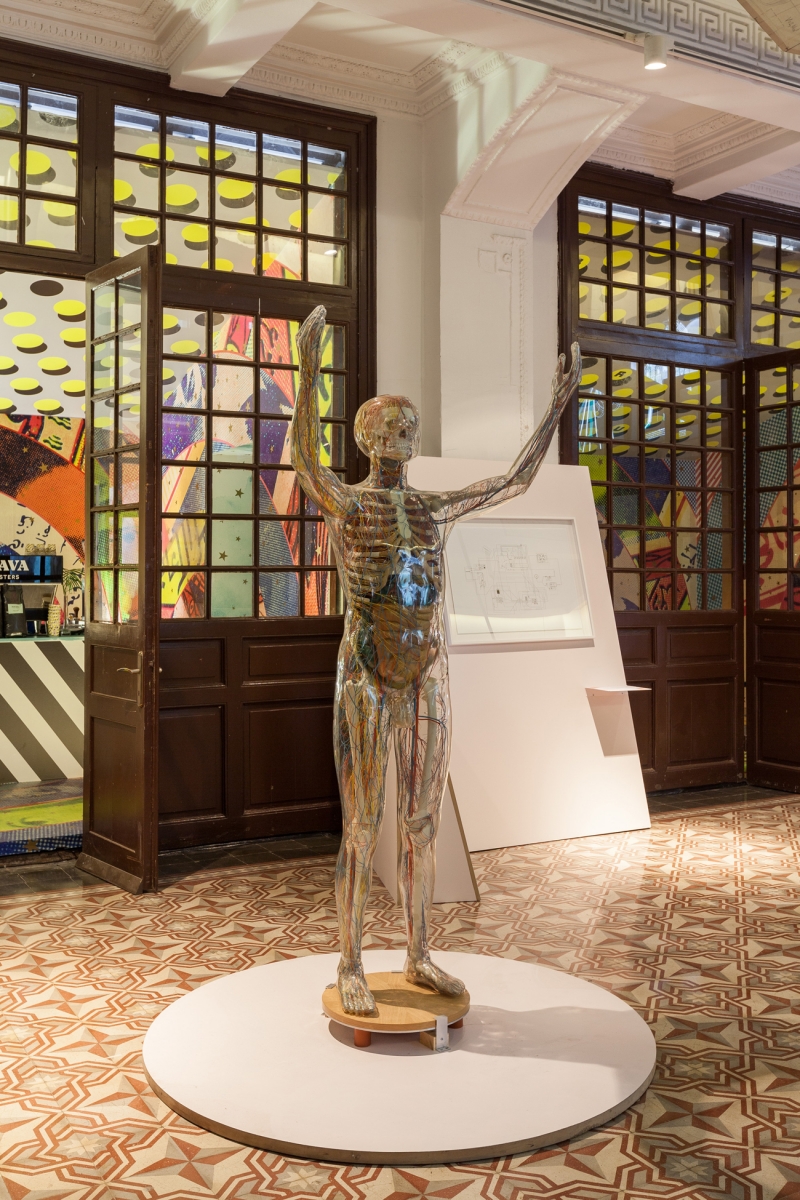 Franz Tschackert’s Transparent Man was a public sensation in the 1930s, having been exhibited in several cities. At the third Istanbul Design Biennial, it has not lost any of its vitality.

​The Istanbul Design Biennale was open from October 22 to November 20.

Contemporary life seems to allow, even require, a stretch beyond human capacity. Think of the limits we seek to surpass, through daily fitness goals and body-honing machines, age-defying toxins and artificial insemination, interplanetary travel and supersonic speed.

And yet, as shown by the kaleidoscopic responses to Are We Human?, the title of this year’s Istanbul Design Biennial, there is no such thing as an authentic human condition, unless it is understood to be synonymous with the act of design itself. So say the event’s curators, the architectural academics Mark Wigley and Beatriz Colomina, who maintain that the human is a “totally designed” being. It’s a position that demolishes any notion of professional siloism; indeed, every facet of life demonstrates the human intellect shaping and forming conditions to suit itself.

This explains the biennial’s carnivalesque range of participants—not only bona fide designers but also artists, architects, scientists, filmmakers, historians, theorists, choreographers, and even archaeologists—and works, from installations to panels to near-ubiquitous video. All together, they ask whether it is even possible to consider being human without also considering the way we “design” our lives, and how these products of design have in turn “designed” us. In a way, this could be seen as an ultimate catchall—a cop-out as a polemic theme—but the constellation of works possess rather profound implications for, within, and outside the design field.

Wigley’s infectious enthusiasm was always heartening when he was at the helm of Columbia University’s Graduate School of Architecture, Planning and Preservation; it is now gleefully unleashed in his role as a curator, and aptly matched by his real-life partner Colomina’s unique ability (she being the founder and codirector of Princeton’s Media and Modernity program) to couch sincere and pertinent inquiries in research. Perhaps because of their curatorial experience and intellectual comfort, they do not heavily stress the biennial’s conceptual structure and methodology. Rather, the theme emerges like a miasma. Organized into four so-called “pools”—body, planet, time, and (the least clear) life—roughly divided among four venues, projects are nevertheless overlapping and occasionally interspersed, sans dogma: space age alongside Bronze Age, prosthetic arm brushing against surgically flayed body, funerary archetypes next to transgender party zone.

The theme of the body is most fully explored at the Galata Greek Primary School, the central exhibition space that hosted the biennial’s two previous incarnations. Amid various projects exploring body image and prostheses is the remarkable artifact of the original Transparent Man, first shown in 1930 at the Deutsches Hygiene-Museum in Dresden. You would recognize this work upon description: a clear and popularly imitated anatomical figure with his innards on display, the stroke of genius being the decision to encase it in Cellon, an early moldable plastic. Exhibited later in Turkey in 1938, Transparent Man was the most visceral display of viscera ever produced, propelling theories of hygiene and eugenics then popular in Germany and America. In its minutely detailed artificiality, this humanoid tells us something about our compulsion to gain mastery over the near-“divine” design of the human. 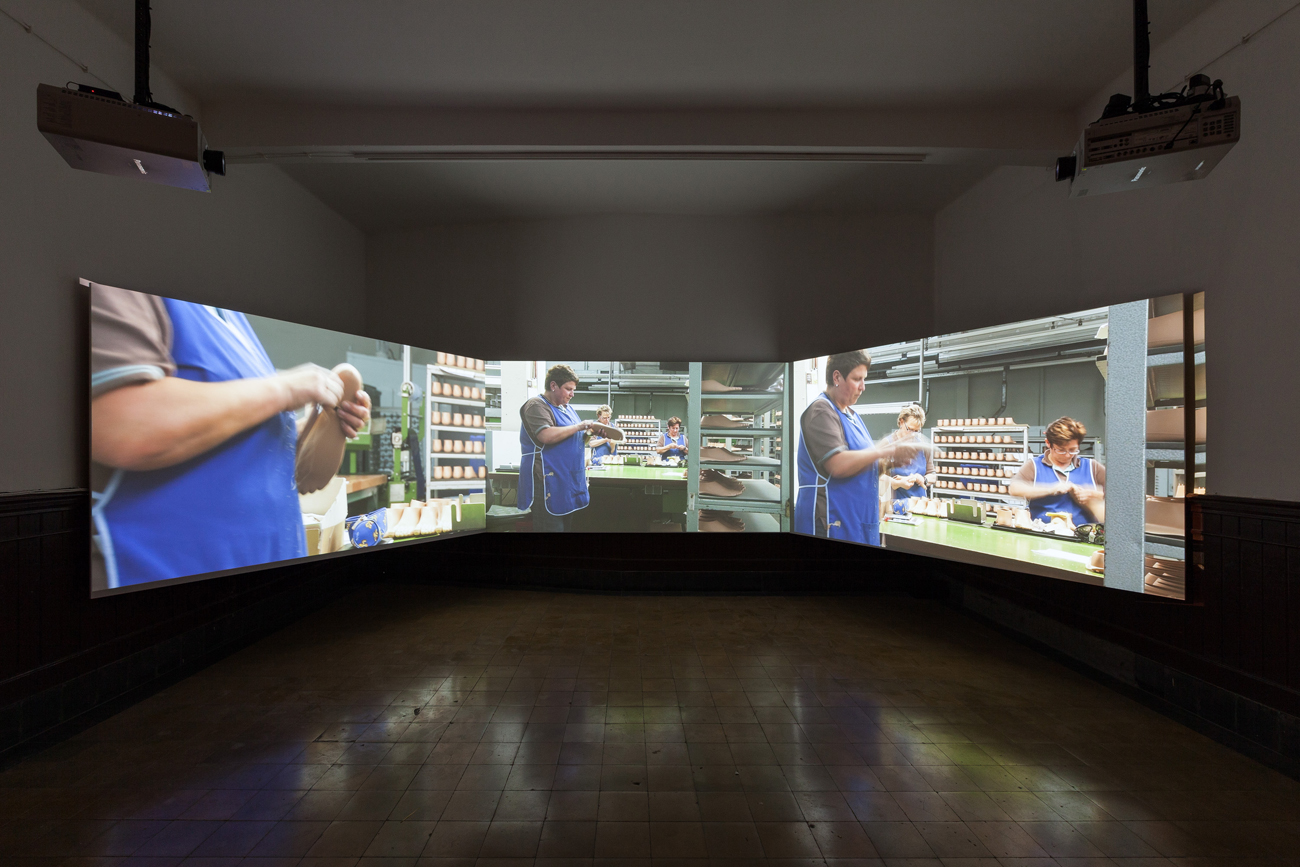 Greater mastery can today be achieved not (only) through a newly synthesized material but rather through the possibilities of the artificial image. In the Memex video installation, the brilliantly named Marshmallow Laser Feast reconstructs, with queasy realism, the likeness of a visibly aged woman out of high-resolution 3D scans. Downstairs from Memex, another video work, Ali Kazma’s Anatomy, induces not awe so much as physical discomfort, forcing viewers to confront the ultimate bodily common ground—death. A postmortem of a postmortem, the video is set inside a medical-school classroom where the fleshy casing of a body is peeled away with deadpan banality.

The terminology of design discourse is usually telling and, in the hands of experienced academics such as Colomina and Wigley, worthy of attention. As a term, “radical”—once the obligatory foam-finger of every hard-hitting curatorial statement—still lingers, while “unstable” has replaced the short-lived implication of acute “crisis” with a more perpetual precariousness. The strongest overtones come from the curators’ assertion of both archaeology and anthropology as design fields; if anthropology is the study of human life, it is also a study of design.

At Alt Art Space, another major venue for the biennial, Wigley and Colomina place great import, not to mention excitement, on an archaeological discovery: a fossil stamped with human footprints dating from 8,500 years ago, found while tunneling under the Bosporus. A closer look reveals not only footprints but shoe prints, divulging early “trends” to protect, enhance, and even adorn the human form. But in terms of anthropological objects, perhaps the hand axes—presented by Turkish firm PATTU—are the most revelatory. Since the mid-19th century, hand axes have been touted as some of the earliest primitive tools; however, recent research has revealed that the finest and most aesthetically pleasing examples may not have been practical but rather ornamental—objects to please the hand and eye. That we were not only animals seeking survival but capable of discerning and crafting things purely for pleasure is a “radical” (here it holds true!) reframing of natural history. This is typical of the spiraling, whoa-man synaptic leaps that the exhibition provokes through a concert of objects: The mental effort required to parse them all means exhilaration is sometimes hard-earned, but when it happens, the quickened bloodflow in those cerebral pathways feels good.

Every facet of life demonstrates the human intellect shaping and forming conditions to suit itself.

Other works touch lightly upon the more nebulous aspects of humanness—kinship, kindness, or even solidarity—or the lack thereof. Technological means for surveillance, data gathering, and communication allow us to discern the scanned bodies of trafficked children, witness the imminent collapse of glacial ice shelves, share in the mass transmission of personally directed racist and abusive messages; we have designed the infrastructure to do all of this, and yet with this power we do nothing. In Homo Cellular, humane responses are filtered through our mobile phones, in images and artifacts that mark the profound impact of the device on our species. Through bodily gestures, it has brought about a behavioral commonality, connecting the young Chinese contortionist shooting the perfect selfie to the enterprising Masai farmer squinting at market index figures. We recognize something of ourselves in the anxious, screen-lit faces of Syrian refugees scarcely landed on the shores of Kos.

Compared with Joseph Grima’s Adhocracy (2012) and Zoë Ryan’s The Future Is Not What It Used to Be (2014), this latest edition of the biennial does not concern itself with ruminations about Istanbul’s status as a polis. It would be churlish, however, to use this as a stick to beat the present attempt: The fact is that Istanbul is a different place now. While in previous years—in the wake of the Jasmine Spring, and the rise of citizen agency—a demonstrative activism gave design and architectural discourse a certain kind of dynamism, the confounding nature of today’s political and economic context, globally as much as in the Middle East, requires a more sensitive analysis. At the Istanbul Archaeology Museums, yet another venue, research works—including Territorial Agency’s meditations on oil, with its narrative of the Anthropocene—inhabit the leftover skeleton of a previous and unrelated exhibition. The museums’ director was imprisoned during Turkey’s attempted coup in July, and no one was on hand to order a full reinstallation for the biennial. Political flag-waving is no mere gesture here; indeed, in a show of power, Erdoğan’s flags drape a number of buildings in the city, while Taksim Square is on lockdown.

Curation in architecture and design remains experimental. Yet here, more respect might have been paid to the physical thrill of the exhibition format and experience. There is more weight attached to intellectual engagement—perhaps understandable given how it is our intellect that marks us from animals. The biggest tell in the Are We Human? prompt is in the asking, the sign of angst and existential crisis being one of the fundamental differences between us folk and timorous beasties. We don’t just live, but we inquire, investigate, and endeavor; in a sense, we sketch theories around the ambiguities of the nature of our living. Though there are whole chapters of linguistic nuance that could accompany the following mistranslation, if you will, disegno ergo sum. 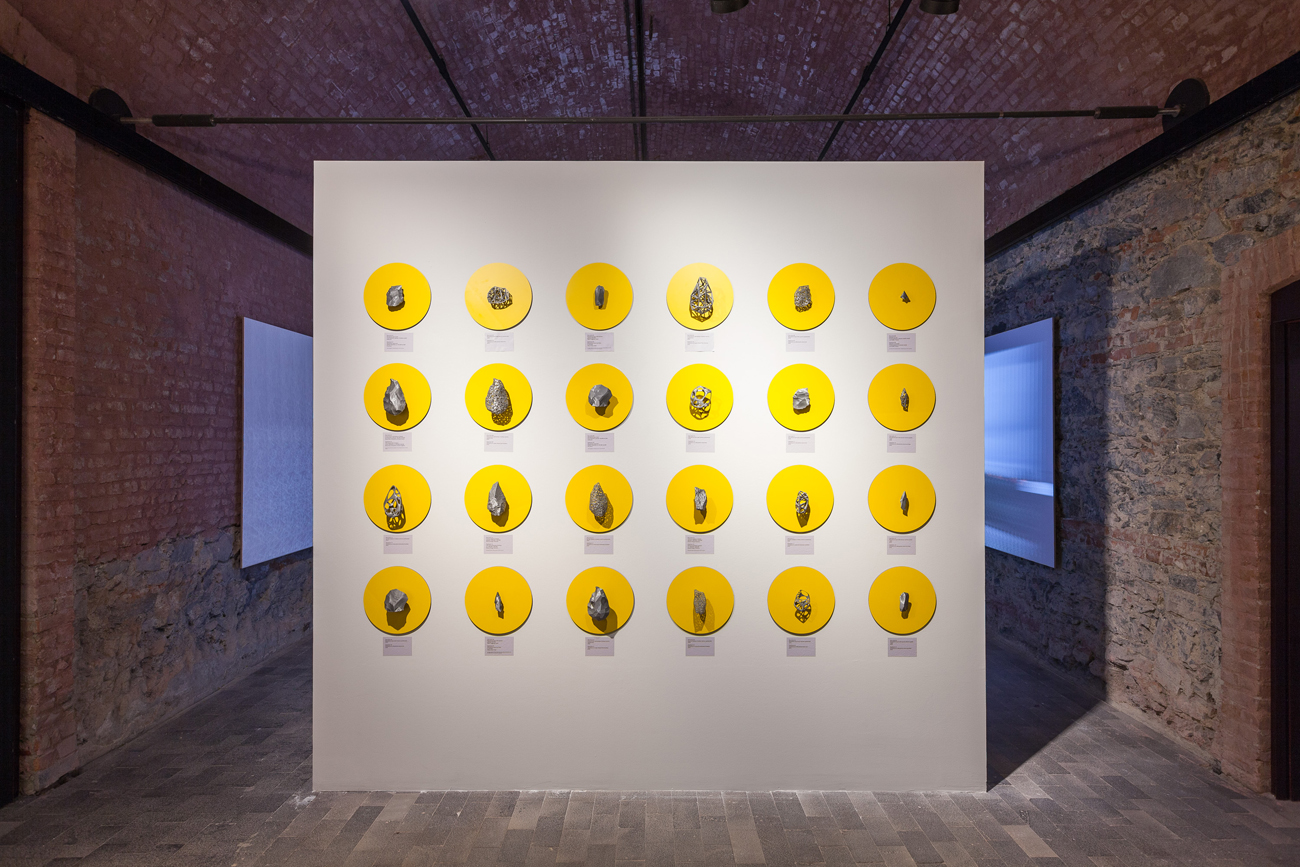 Inspired by the archaeological object of the hand ax, PATTU’s Objects of Daydreaming installation presents an array of 3D-printed specimens, each one a riff on the original.