Looking at Oscar Niemeyer Buildings, our writer is struck by how quickly Modern structures start to look like ancient monuments.

The best thing about the International Style today is the paradox of patina on what were supposed to be forever-new buildings. Looking at Oscar Niemeyer Buildings, the recently released Rizzoli monograph of the great 100-year-old Brazilian architect’s work—with new color photos of his nearly 300 buildings—I’m struck by how quickly Modern structures start to look like ancient monuments.

Of course, many Modernists self-consciously drew from the enduring forms of nature in their work. Niemeyer’s buildings in particular express how the space-age fantasies of the 1950s and ‘60s can transcend kitsch to become monolithic, timeless forms. (On the cover, the 1991 Museum of Contemporary Art, in Niterói, Brazili, looks as though it could double as a launch pad—but doesn’t its form also echo the huge slab of rock jutting off an island in the distance?) 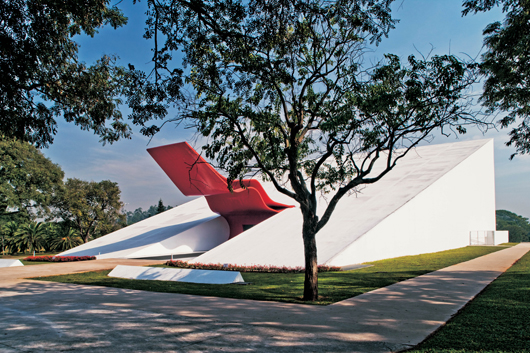 São Paulo’s Ibirapuéra Theatre (above)—originally designed in 1951 but realized only in 2002—is another good example. The slanting structure looks as though it were built especially for the patterns left by rain and moss, not to mention the shadow-play of clouds and trees. At the end of the day, what could be more enduringly futurist than the eternal shapes of decay? This one will probably look even better after it’s been battered a bit by the elements. 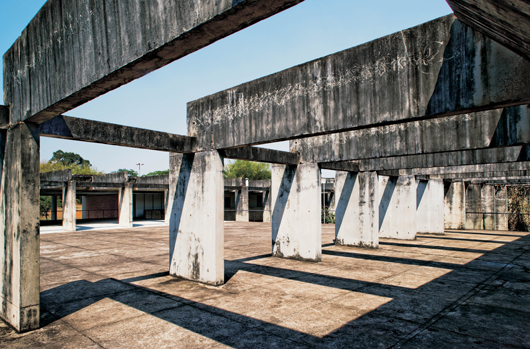 Niemeyer’s 1960 Brazil University (above) might inspire a new angle on so-called organic Modernism. The concrete facade, once stark-white, now looks ancient, blackened by age and marked by strange squiggles that resemble carefully drawn calligraphic strokes. It makes me wonder how today’s latest structures will look in another 50 years or so. Will they age as well as Niemeyer’s buildings have? Or was he particularly attuned to the architecture of elegant decay? It seems worth considering. After all, no matter what form we give it, the future eventually gets dirty.