Does “Made in Melbourne” Have Any Global Clout?

Given its remoteness from the rest of the design world, Melbourne hasn’t yet achieved the cachet of other international cities. But it’s well on its way. 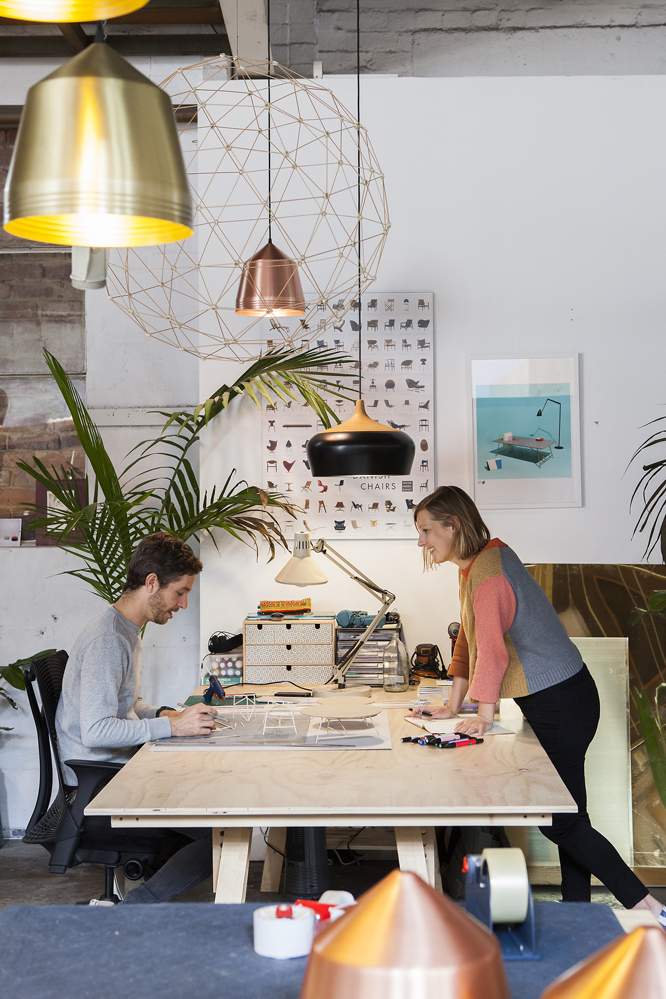 Coco Flip founders Haslett Grounds and Kate Stokes and in their Melbourne studio.

Australia has a pretty wild reputation. Though the country often takes pride in its image as a dangerous continent full of animals just waiting to kill you, the reality is that, much like the rest of the developed world, most of its population lives in metropolitan centers. But while Australia’s cities may be thoroughly modern, they are still incredibly isolated from the United Kingdom, Europe, and the United States. In the country’s second-largest city, Melbourne, this remoteness has bred a unique creative culture.

Unlike in Europe, the Australian scene is dominated not by large design houses—which commission designers and have strong volume-based relationships with manufacturers—but by independent design studios working directly with local or offshore manufacturers and distributors. “Melbourne has a great start-up culture for design studios,” explains Simone LeAmon, curator of contemporary design and architecture at the National Gallery of Victoria. “We celebrate independent and alternative cultures here, and people pride themselves on which creatives they support.”

As an independent designer herself, LeAmon makes her own products in Melbourne and sells them globally. “I think our point of difference is products that take a risk, where they are outliers and may not be totally stylistically on trend. They always sit a little bit outside of what’s dominating markets internationally.”

While products that are designed and made in a specific location will undoubtedly be “of that place,” Melbourne designer Ross Gardam is adamant that his creations—designed and made in the city—avoid a consciously Australian vernacular or design aesthetic. “I want people to associate with my brand,” he says. “I don’t want ‘Made in Melbourne’ to be the first thing people think of. I like to think that it can stand up internationally.” 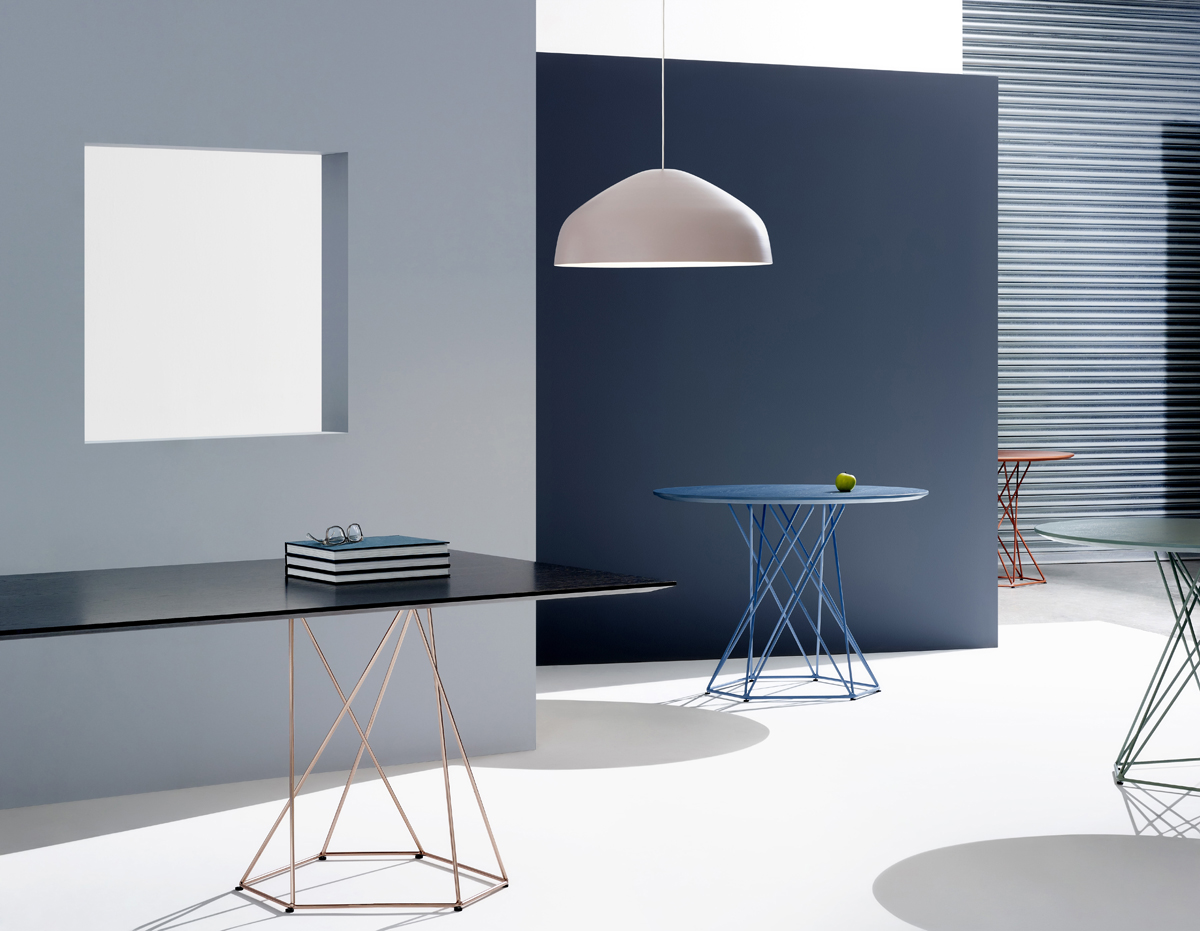 In addition to his lamps, Ross Gardam designs spindly tables that are at once minimalist and cheerful.

For Gardam, “Made in Melbourne” isn’t any sort of formal movement. Rather, it’s the result of a strong manufacturing base that remains close to the city. Uniquely for Australia, Melbourne retains a lot of manufacturing capability—something less common in the country’s other large cities. This proximity to manufacturing, and the city’s relatively small design industry, make it much easier to develop products.

Designer Kate Stokes of Coco Flip—renowned for its Coco Pendant lights—believes that for independent studios like hers, designing and making products locally is more about the practicality of production than a strict focus on staying local. Since Stokes and her team are based in Melbourne, it makes sense for them to collaborate with people they can work with in person, but she notes that the company would happily work with someone elsewhere in Australia if it made logistical sense. “I’ve never really thought about Melbourne itself being this particularly big draw card, both in Australia and internationally.”

This view is perhaps the most alluring thing about Melbourne designers. They don’t feel that they’re doing anything particularly unusual with their work— they’re simply passionate about good design, and they love and care about the success of the manufacturers with whom they collaborate.

While the notion of “Made in Melbourne” certainly exists, it stubbornly refuses to be owned by anyone.
However, not only is production expensive in Australia (due to high wages), but the costs of assembly and shipping can make many products— particularly furniture—prohibitively expensive. This means smaller items, such as lighting fixtures, are the most sensible export goods.

Cheri Caso of New York–based Merchant No. 4 distributes lighting from both Gardam and Stokes stateside and sings the praises of products from Melbourne. “It’s quite a creative hub, and we’ve only recently been discovering this in the United States. Everywhere I turn in New York, I am finding really good music, design, and fashion coming out of Melbourne.”

Caso recalls a recent request from a large U.S. chain to mass-produce Stokes’s Coco Pendant. “It just didn’t fit with the direction she wanted to take her company and designs. The chain store was floored that she said no—they were not expecting that—but it shows that her vision for her company is taking the long, slow road, not the quick-profit route.”

While the notion of “Made in Melbourne” certainly exists, it stubbornly refuses to be owned by anyone, or to become just a motto on a swing tag. The remoteness of the city from the global centers of the furniture and lighting industry has allowed, and in many ways forced, designers to embrace local makers.

“They’re not interested in offers to expand and mass-produce outside of Melbourne,” Caso explains. “Huge profits, and potentially sacrificing quality, are not a driving force—keeping the production small, local, and of top-notch quality is what seems to be important to them.”

“Made in Melbourne” may not have the same gravitas as “Italian Made,” but this informal collective of Melbourne designers and manufacturers is certainly making a mark with high-end, innovative design and forging an international reputation for quality and refinement. 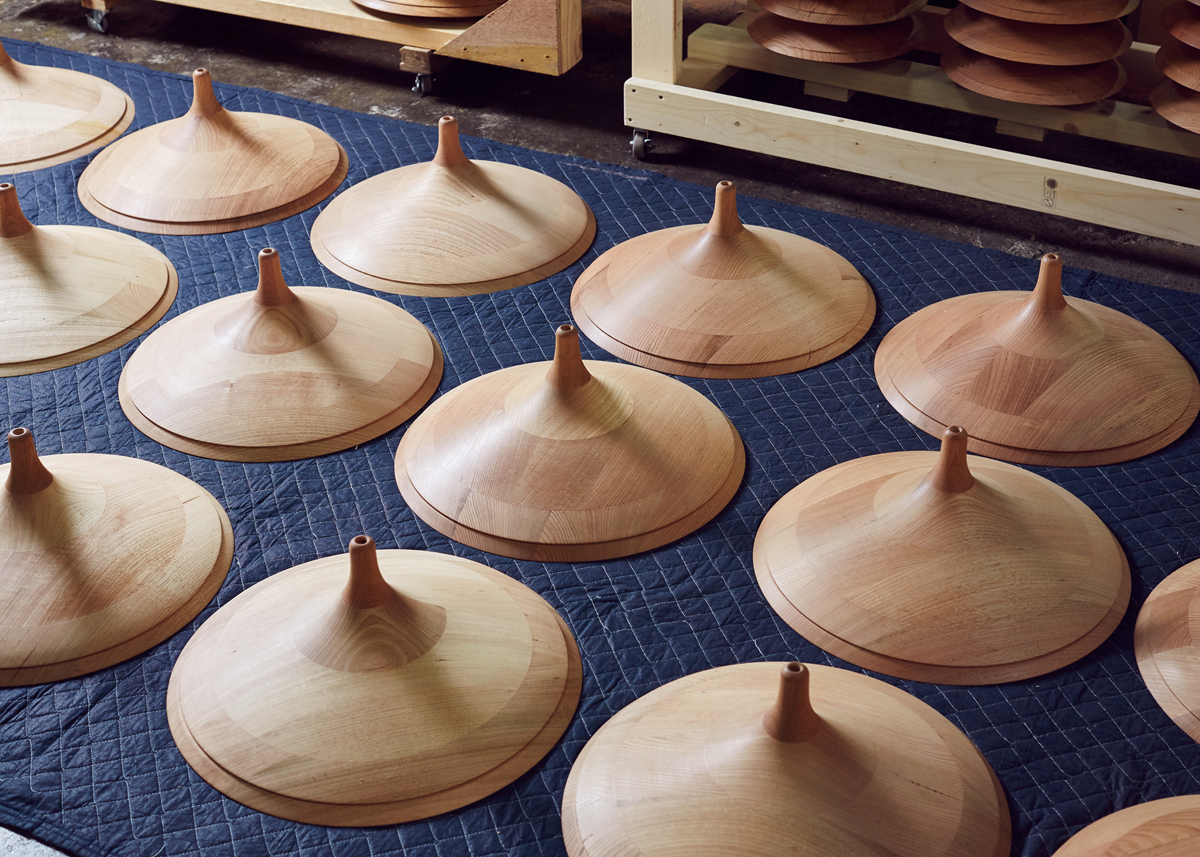 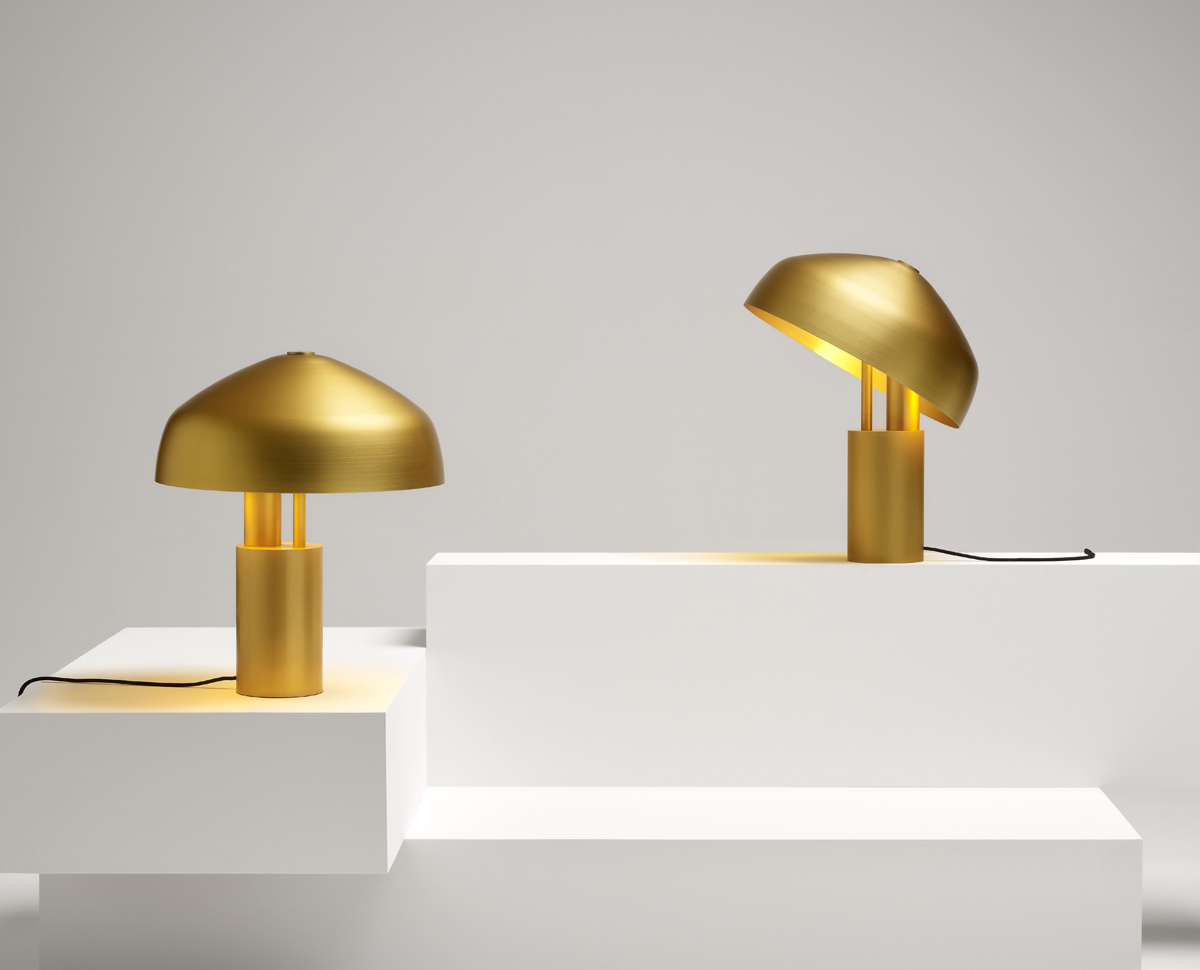 Gardam’s Aura Desk Lamp is made from precision-milled aluminum anodized in gold. A magnetic joint makes the shade adjustable. 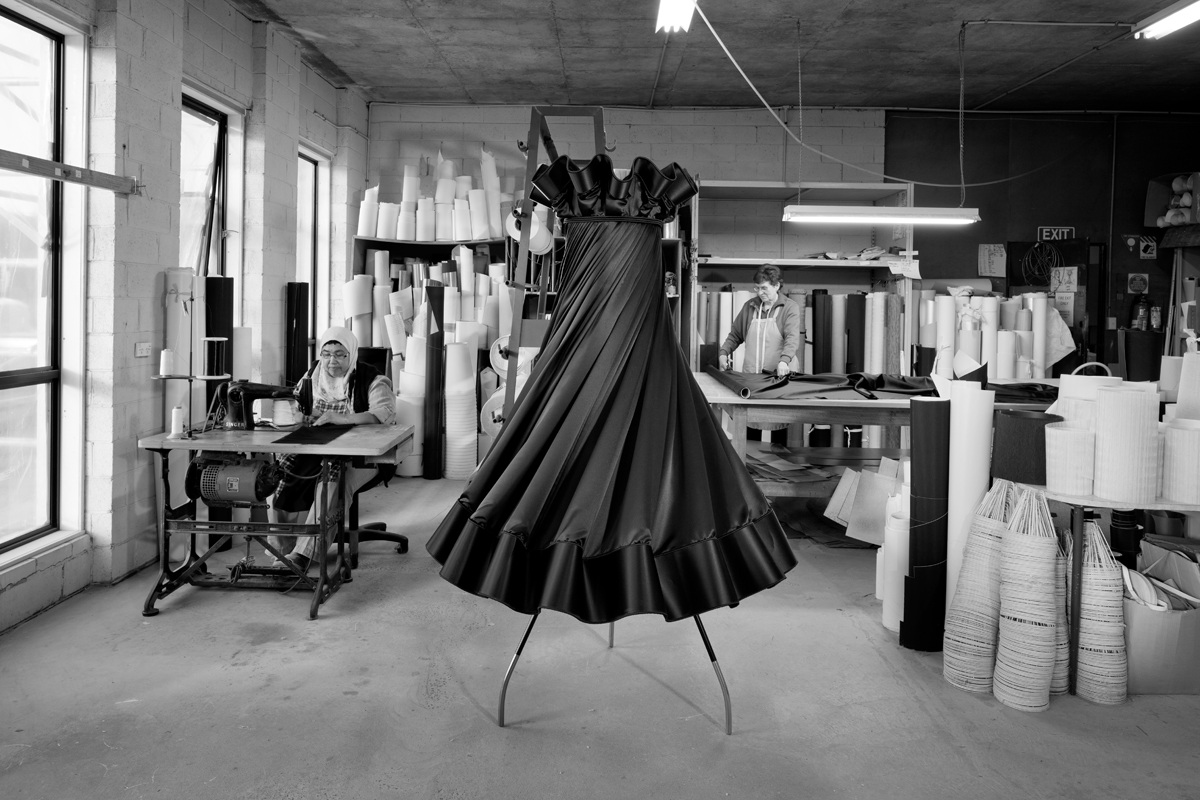 Simone LeAmon’s Prima Ballerina lampshade references the frills and twists of an Edwardian silhouette. The project was part of a collaboration with Australian lighting manufacturer Rakumba.