This is part one of our fall roundup of new and notable books on architecture, culture, and design. Stay tuned for the second installment later this month. . Shigeru Ban: Paper in Architecture Edited and designed by Ian Luna and Lauren A. Gould Cover design by Kenya Hara Rizzoli, 232 pp., $65 Having outlined the […]

This is part one of our fall roundup of new and notable books on architecture, culture, and design. Stay tuned for the second installment later this month.
.

Having outlined the architect’s key design principles in its introduction (an emphasis on humanitarian design “pressed into service”) Shigeru Ban: Paper in Architecture follows the relatively linear evolution of Ban’s constructions in paper, a building material that he has championed and a typology he’s developed over the past 20 years. Ban’s achievements are nothing short of remarkable—he builds cheaply and with minimal environmental impact, which, in particular, makes his architecture ideal for temporary relief structures. But it remains to be seen how structurally complex the buildings can get, since the largest and most sophisticated architecture in Shigeru Ban tends to be elaborately constructed roofs and open-air exhibition spaces. (By no means should that diminish the architect’s success to date.) Ban excels at exceeding expectations, and recent projects, like the unbuilt Georges Pompidou Centre in Metz, France, hint at interesting new possibilities for his paper creations.
. 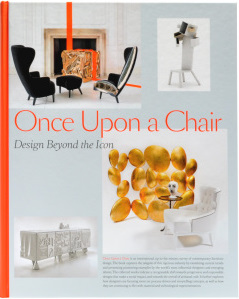 Once Upon a Chair: Design Beyond the Icon
Edited by Robert Klanten, Sven Ehmann, Andrej Kupetz, and Shonquis Moreno
Designed by Floyd Schulze
Gestalten, 272 pp., $65

Once Upon a Chair: Design Beyond the Icon is not really about chairs, and only superficially about post-iconic design. Nor, as is implies in its introduction, does the book ever explain what’s so “progressive” or “responsible” (its words) about the work it showcases: pieces like the Rockin’ Chair, which comes equipped with built-in microphone and headphone jacks, or the PING-PONG Dining Table—whose name pretty much says it all. The chairs (and tables, stools, lamps, bookshelves, vases, kitchenware, and rugs) showcase the avant-garde in product design, and they’re often refreshingly whimsical and innovative in their use of material and technology. What they’re not—and this is a problem only because the book claims it as its guiding principle—is either socially impactful, or representative of identifiable trends in the world of furniture making.
. 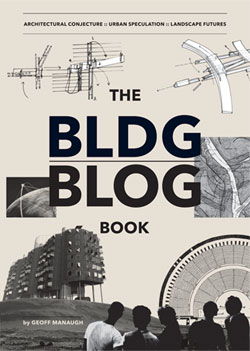 If you turn to a random page in the BLDGBLOG Book, odds are you’ll find something—an image, a sentence, a title—that piques your interest. The book, which bills itself as “architectural conjecture, urban speculation, landscape futures,” grew out of a blog by Geoff Manaugh, an L.A.–based writer with a background in architecture (and an erstwhile contributor to this magazine). His project is a mix of whimsy and serious research, a collection of short pieces on everything from underground sewage systems and audio architecture to the possibility of building on Mars. The advantage of a work like this is that it never takes itself too seriously—acknowledging its shortcomings and positing more questions than definitive answers—which allows it to keep a giddy and genuine fascination with its subjects. Illustrated, appropriately, with a combination of professional and homemade images, it’s a welcome departure for a discipline that, justified or not, often seems a bit heavy-handed and self-serious.
. 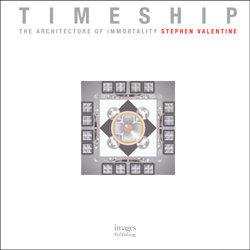 Timeship, the building, is about cryogenics. That’s the first thing to know about Timeship, the book, which reads as both an argument for the legitimacy of “life extension” technologies, and an explanation of Stephen Valentine’s design for a structure that can store frozen bodies and organs in anticipation of possible future medical breakthroughs. The architectural program could have yielded an interesting exploration of architecture’s capacity to interpret ideas about death and healing through form. Instead, both the book and the proposed structure reproduce a series of largely unrelated images and historical references, incorporated into the somewhat generic geometry of the building; Timeship is chock-full of references to Aristotle, Fibonacci, Vetruvius, and Frank Lloyd Wright, not to mention photos of mandalas, phoenixes, sarcophagi, space travel, poppy flowers, Saturn’s rings, Egyptian mythology, Zen gardens, etc. It’s all related, but only tenuously, and even after 119 pages dedicated to the future cryogenics center, the project is bound to provoke less enthusiasm than skepticism.
. 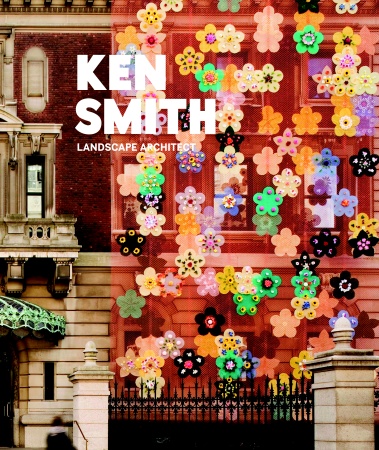 In his 20-year career as a landscape architect, Ken Smith has designed public parks and private gardens, but also experimented, in museum shows and installation pieces, with projects that redefine the scope of his discipline and its media. Typical of Smith’s more experimental work is a design he completed in New York in 2007, for which he draped oversized man-made flowers, attached to a bright synthetic scrim, over the Cooper Hewitt museum’s 91st Street façade; photos of the project, which grace the cover of Ken Smith: Landscape Architect, make the juxtaposition of cartoon screen and staid Fifth Avenue mansion seem artificial, like the two images were culled from different sources and combined in Photoshop. Generally, Smith’s work is clever and conceptual, and the book presents a thorough documentation of fifteen projects Smith has worked on since 1992. It’s not exactly an exhaustive review of Smith’s career, but as an exploration of the possibilities of landscape architecture and one of its more interesting practitioners, the book is undoubtedly worth a read.
. 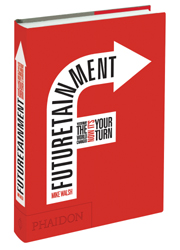 “Media ecosystem” is a term Mike Walsh drops casually, but the phrase is startlingly descriptive of the 21st century landscape of marketing and technology that he outlines in his book Futuretainment. Walsh, with help from the Australian graphics firm Frost Design, limns a world in which technology—music players, televisions, movies—anticipates the needs of its users and responds accordingly, and where the virtual world and real world become increasingly interconnected. (Think: your media player knows where you are and plays content that suits your geographic location). Perhaps what the book does best is marry text and graphics—mostly grainy photographs that look, fittingly, like they were taken with a cellphone camera—in a way that suggests, in one example, the physical reality of Chinese electronic game rooms, where teenage gamers spend years developing digital avatars. The driving force behind new media, according to Walsh, is a change in cultural attitudes toward technology—what’s acceptable, what’s normal—and though he acknowledges that makes predicting the future a little problematic, Walsh’s forecasts are both thoughtful and thought-provoking.
.