With its emphasis on landscape, the Flight 93 National Memorial resonates with the quiet power of a great battlefield. 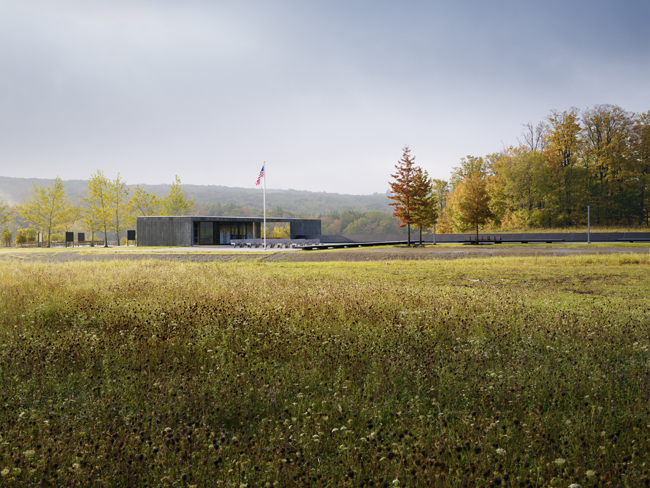 The Flight 93 National Memorial has been a decade in the making.

Of the four planes hijacked on September 11, 2001, United Airlines Flight 93 is the only one that did not come down in one of America’s media capitals. It was fated instead to plunge to earth beside an open-pit coal mine in a far corner of western Pennsylvania, after passengers forced their way into the cockpit and overpowered the hijackers, who were almost certainly bound for Washington, D.C. The remoteness of the site, in the rural town of Shanksville, means that everything that has happened there since that awful day has come to us in intermittent bursts, like the heart-rending phone calls that those on board made to loved ones in the final minutes before the crash.

All that has made the effort to build a memorial to the flight’s 40 victims agonizingly difficult. While New York was steamrolling ahead (relatively speaking) at Ground Zero and laying the foundations for the construction of a memorial, a museum, a transit hub, and several skyscrapers, the Flight 93 National Memorial was struggling to gain control of the 2,200-acre crash site. In 2005, after a rigorous international competition, the National Park Service, along with a handful of other groups, selected the Los Angeles–based Paul Murdoch Architects to design the landscape and visitor complex. But the small firm wasn’t able to obtain some critical site survey data for another four years. Raising money to build and then finish the visitors’ center proved excruciatingly difficult. And when the project did receive media attention, it was often of the worst kind. Conspiracy theorists baselessly asserted that the design was secretly coded with Islamic symbols. It took a five-page white paper by the National Park Service, citing testimony from scholars, to set the record straight.

Still, being removed from the media spotlight did have its advantages. Once the conspiracists were discredited, the designers, Paul and Milena Murdoch, were able to plug away at the details without a lot of architectural cooks poking their noses into the kitchen. The landscape is now starting to lose its rawness. With the completion of the visitors’ center last September, along with a separate learning center, it is finally possible to make sense of the immense undertaking. (A monumental wind chime called the Tower of Voices—93 feet high—is expected to be finished in 2018.) The composition has a simplicity and clarity, not to mention a serenity, that are lacking at New York’s perennially mobbed memorial complex. It is also blessedly devoid of jingoism. After walking around for over an hour, I was struck by how few inscriptions there are in the stonework. The precise times that the other three planes hit their targets are marked in sequence on the path to the visitors’ center. But the much-quoted, and possibly apocryphal, command “Let’s roll” does not appear on the exterior of the visitors’ center (although it is included in one exhibit). The Murdochs let the landscape speak for the dead, the way great battlefield memorials do. The difference is, what appears to be a place preserved is almost entirely a man-made construction. The architectural interventions do exactly what memorial design should do: They shape our experience of the site and dramatize the event while still allowing us to grieve on our own terms.

Every element in the Murdochs’ design is aimed at controlling what you see and when you see it. When visitors reach the parking lot at the top of the hill, they are greeted by a massive freestanding concrete wall rising from a field of wildflowers. It angles toward the horizon, evoking a plane’s ascent. Rather than provide an overlook where you can survey the entire crash site, the architects have completely blocked off your view. As you get closer, the great wall parts, allowing a glimpse of a second wall and a bit of sky. The one-room visitors’ center—a mere 7,500 square feet—is gripped by this concrete vise, unseen until you step through the breach. 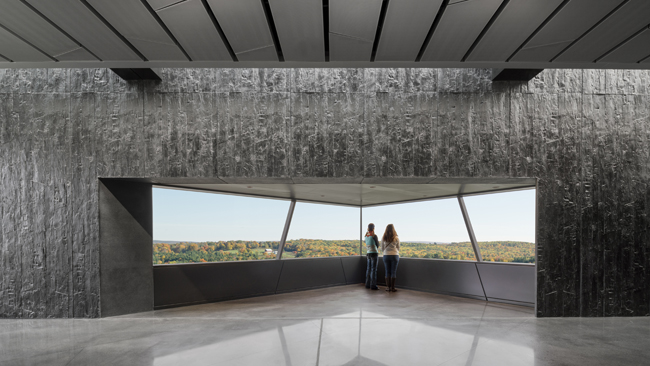 After years of delays and small bouts of controversy, the visitors’ center finally opened in the fall of 2015.

​The architects let the landscape speak for the dead, the way great battlefield memorials do.
The arrangement sets up a classic architectural progression, a sense of compression followed by an explosion of space. Beyond the wall, an enormous vista is laid before you. You see not just the memorial precinct but, in the far distance, the rolling hills of western Pennsylvania, each capped, by pure chance, by the spinning propeller of a wind turbine. The power of that vista draws you down a runway of polished black granite, toward an overlook that juts over a circular meadow. The glass railing features one of the site’s rare inscriptions—“A common field one day. A field of honor forever”—but nothing specifically tells you that you are following the trajectory that Flight 93 took in its last seconds. Then your eye settles on a far-off grove of hemlocks, the same grove where the plane scudded to a stop and burst into a fireball.

We are drawn to sites like this because we want a real-life, physical encounter with the place where a world-changing event happened. Yet the site of the Flight 93 crash is hard for our minds to comprehend. Not only is it many times larger than Ground Zero, but we have no footage of the attack to serve as a visual baseline. Because the plane probably fell in a chaotic spin, human remains were scattered across the hillside, which had been carved out by the coal mine. That meant the actual crash site had to be defined and given borders. The Murdochs, working with Nelson Byrd Woltz Landscape Architects, used the circular Field of Honor to establish those boundaries and outlined it with an honor guard of maples and oaks. Still, some felt it wasn’t quite enough. After conversations with family members and others, the Murdochs realized that people had a deep need to be able to identify the precise point of impact. The architects ended up bringing in a large boulder and placing it in front of the surviving grove of hemlocks. It’s the closest thing to marking the spot where Flight 93 touched the earth.

One of the recurring motifs in the design is an abstracted hemlock tree. The symbolism works on several levels. In nature, the trees are bound together by a shared root system, like the passengers united by their shared destiny. Because the grove survived the fire from the crash, it was seen as a symbol of resilience. When Paul Murdoch designed the concrete walls of the visitors’ center, he specified that the wooden formwork should be from hemlock trees. The hand-hewn boards, which came from old local barns, left the concrete deeply scored with the impression of the hemlock grain, a nod to the resilience of the trees in the grove, as well as a subtle connection to the region. Given the memorial’s off-the-beaten-track location and size, such details are an acknowledgment that it is also a national park that will continue to serve the local population after the individual memories of the attack fade.

After a long look at the Field of Honor, most people will double back to the visitors’ center, which offers a multimedia narrative of the day’s events. A V-shaped bay window offers another view of the crash site. The most interesting part of the structure, however, is its place in the landscape. As you round the Field of Honor, the structure’s geometry constantly changes. At one point, the angled walls evoke the uplifted prow of Le Corbusier’s chapel in Ronchamp. It’s not until you complete the journey that you realize the concrete walls have the arc of a Richard Serra sculpture. Their curve effectively completes the circle around the Field of Honor, forming an eternal ring that promises us the cycle of life will continue. 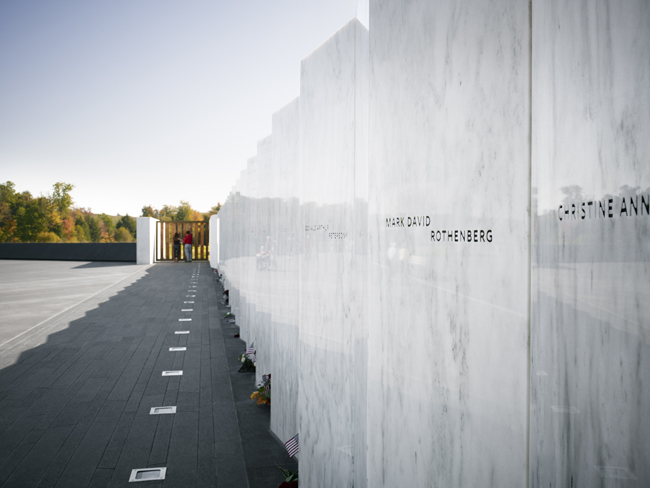 The complex includes a long granite promenade and a marble inscription wall. 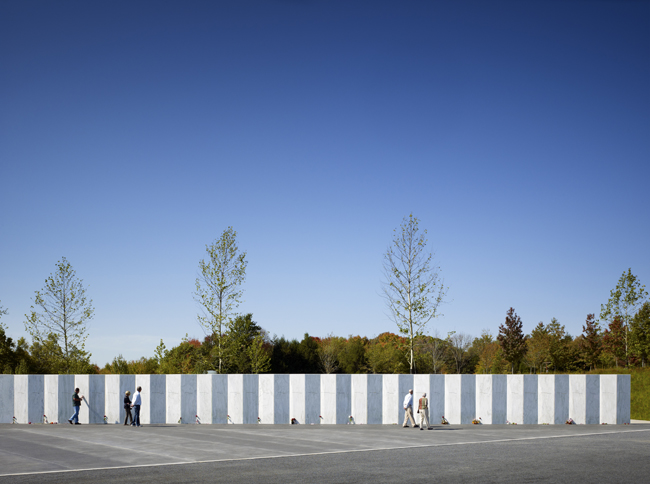 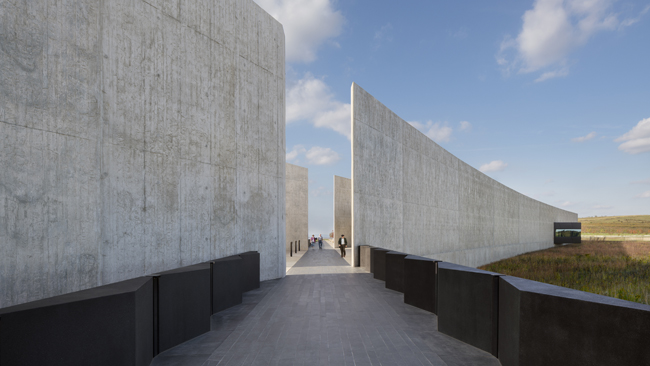 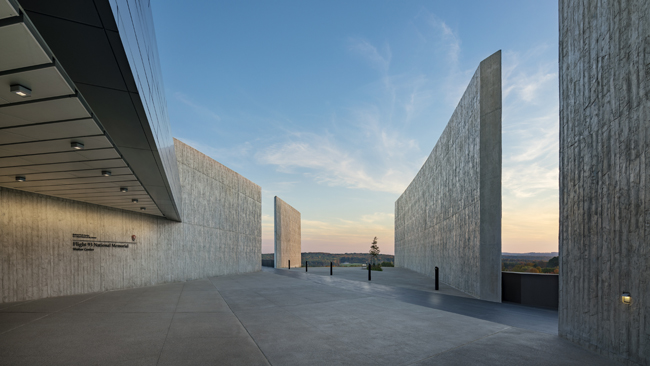 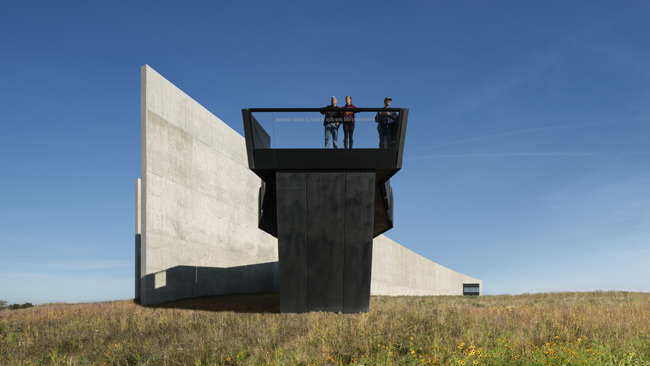