LUSH, the latest exhibit at the MAK Center for Art and Architecture, is a great way to experience the famous house anew.

A stone’s throw south of West Hollywood’s Sunset Strip, a few blocks east of La Cienega, stands LA’s first Modernist residence: the Schindler House. The famous low-slung house, built in 1922 by Rudolf Schindler, is hidden at the end of a narrow dirt driveway behind a dense grove of bamboo. Although originally designed as a “cooperative dwelling for two young couples”—Richard Neutra and his wife once shared the domicile with the Schindlers—the horizontal structure has been home to the MAK Center for Art and Architecture for more than two decades. Verdant exterior courtyards, formed by the house’s pinwheel plan, make for an ideal environment for a landscaping exhibition.

LUSH is that exhibition, an entertaining eco-chic gathering of ideas about contemporary landscape design. Curated by Mia Lehrer and Priscilla Fraser, the show features work from five teams of up-and-coming Southern Californian offices. These projects, which occupy each of the Schindler House’s three courtyards as well as the rooms inside, are musings on California’s water crisis, even if they may not appear so at first glance.

To call them “proposals” would be charitable, given their provenance: the works were the result of a design-a-thon, the first in the MAK’s inaugural Summer Charrette Series. The program intends to examine the evolution of residential design, particularly SoCal’s single-family home typology. And so participating designers were asked to reinterpret and reimagine the grounds of Schindler’s 1936 Fitzpatrick-Leland House, a more luxurious abode than the architect’s own house a couple miles up Laurel Canyon. 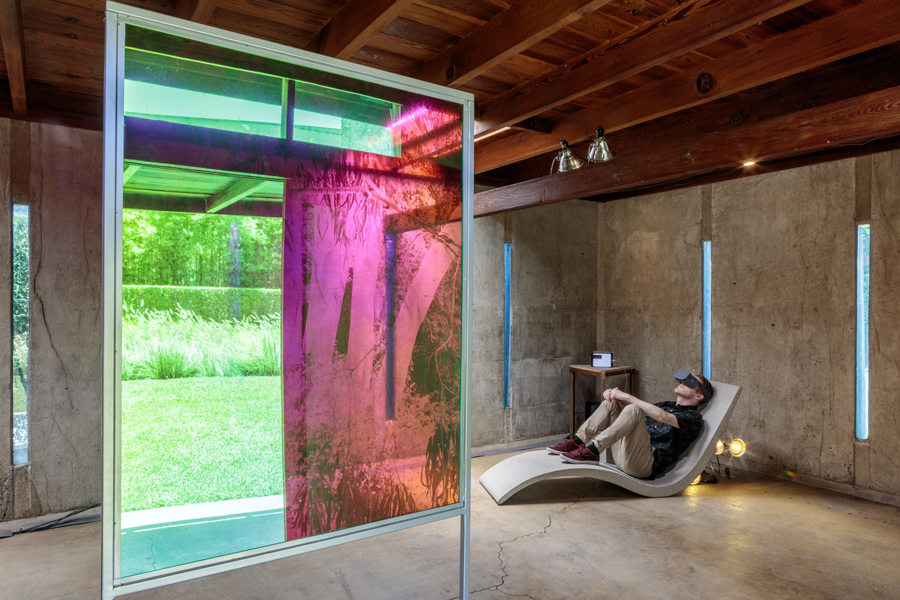 Given the limited space at the Mulholland Drive adjacent property, the organizers opted to use the Schindler House and its expansive gardens as an experimental staging ground for the designs generated by the charrette. The most poignant entry is by Terremoto, an Echo Park–based landscaping firm. The designers installed a ring of potted cacti in the house’s rear courtyard; in the center 12” by 12” concrete tiles (modeled after the pavers at the Fitzpatrick-Leland House) are stacked in a low heap. The project is elegant while the effect is eery, the inner sanctum of a cloistered, private place.

The rest of the exhibition offers less clarity. A virtual reality headset flaunts terrestrial transformations. A panel of pink tinted glass distorts the backyard’s greenery. A “mood board” containing gardening clippers, pressed flowers, an almanac, and other ephemera attempts to raise the ecological consciousness of visitors. In a nod to Kubrick, there is a Shining-esque typewriter, with a tree stump set in front of it. Instead of Jack Torrance’s paranoid repetitions, a text propped up on the typewriter lays out best-case practices, providing the visitor with gardening advice and water conservation suggestions.

Although LUSH is more lighthearted than its literature makes it out to be, it succeeds because it doesn’t overwhelm its venue. Unlike previous productions at the MAK, the outdoor-focused exhibit plays up the ambiance of the architecture. The setup encourages visitors to meander through uncluttered rooms, admiring the house’s serenity while taking in the imaginative installations. It’s a charming excuse to visit one of LA’s most underrated cultural sites.

If you enjoyed this article you may also want to read this interview with landscape architect Mia Lehrer on the LA River Revitalization Project.