Reactions, responses, and reviews of the Museum of Modern Art’s recently opened exhibition regarding housing in the American suburbs have steadily been popping up here and elsewhere on the Internet. The five design proposals put forth in Foreclosed: Rehousing the American Dream have been called “propositions” in the spirit of instigation, catalyzing necessary conversation on cultural assumptions and priorities.  I admit that I am too closely tied to the exhibition’s project to offer any sort of fair review, but it is with that spirit in mind that I argue those five propositions and the show in which they are contained manage both to reveal and underscore a fundamental conflict in the planning, design, and development of affordable housing and in the approaches taken and not taken in response to the crisis still being faced. That conflict was seen throughout the six-month research and design process and is seen within each of the exhibited projects, in the differences between them, and in the varied criticisms and commentaries they have thus far elicited.

In rather simplistic terms, one can categorize that conflict with a series of dichotomies: public/private, large/small, national/local, and most popularly top-down/bottom-up. In many ways, American Suburbia has long been the locus of this conflict. It is, after all, the birthplace of NIMBYism, which requires at minimum the imagined territory of a backyard. Bryan Bell’s review of the show summarizes some of the conflict surrounding the scale and direction of intervention and does so while invoking the mantra of the Occupy movement. “We are the 99%” resonates because it reminds us that the problems facing Americans, some of which are engaged in Foreclosed, are widespread and systemic. While they are exemplified in individual stories and singular homes, they exist beyond the local community at the scales of the city, the region, and the nation. Further, those problems are structural — embedded in the financial systems, political mechanisms, and real estate development practices that determine housing provision. 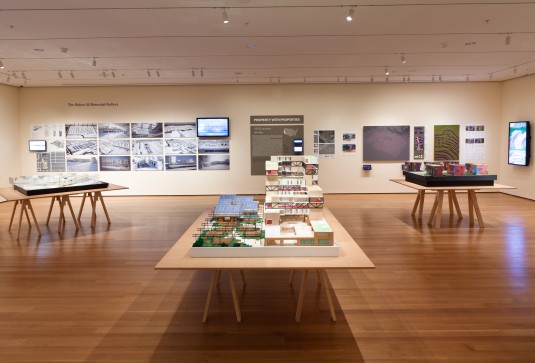 Of course large-scale, system-wide, policy-based approaches to the crisis of foreclosure and housing affordability should require and enable local participatory processes, community input, and context specificity. Still, taking a semantic cue from MOS’s public health-related proposition, it is reasonable to call the circumstances prompting both The Buell Hypothesis and Foreclosed an epidemic. As with any epidemic, its individual instances and symptoms must be treated with sensitivity, but it will persist until both the root causes and modes of transmission are identified and addressed.  One at a time, we must try to save homes from foreclosure and save communities from collapse, but we must also recognize that these are band-aid measures unless they include long-term sustainable strategies and policies for sheltering Americans in homes they can afford within communities where they can work. Acknowledging this epidemic scale, it is relevant to note that the Occupy movement is not merely a grassroots initiative; it is a network from the bottom calling for action at the top.

What has thus far been emphasized in many reactions to Foreclosed is a reading of singular strategies imposed wholesale across large sites by a single designer or developer, for better or worse. What seems glossed over or often unnoticed is that latent beneath the models and between the lines of wall text are the ways in which much of suburbia is presently created and expanded. For example, Zago Architecture’s design proposal is situated on a swath of land coterminous with a site slated for residential development by a private developer, WORKac’s proposition sits within the boundaries of an existing urban redevelopment area, and MOS’s circular model is based on a typical walking radius centered at a transit station (a site-organizing tool commonly implemented in planning New Urbanist and transit-oriented developments). The result of these decisions is that each project represents a mixture of real and fictitious possibility. As such, reactions to these projects are reactions both to places and processes that might be as well as to the places and processes that currently are. Perhaps what is most compelling about the work in Foreclosed are the projects’ attempts at pulling apart suburbia’s binary conflicts and forcing an acknowledgement of problematic premises within the real status quo.

Frankly, it’s a long-standing yet timely tactic as thousands of Americans, members of the 99%, have shared their individual stories in attempts to force similar public acknowledgement of an epidemic. Among the questions on the table is that of the role of architecture (and architecture within the museum) in the search for workable solutions, to which the stock answer within the field is something about synthetic problem solving and visionary thought leadership. The first step may simply be the difficult and contentious public identification of where the problems actually lie in order to move beyond top/bottom and toward throughout/within, a step architects and the MoMA have taken before. In 1934, the museum exhibited America Can’t Have Housing aimed at “show[ing] why America needs housing and yet is so backward at filling this need.”[1] That was several architectural lifetimes ago and the specifics of the housing problem were different, but it seems much of the conversation was the same. In the museum’s Bulletin, Carol Aronovici (chairman of the committee responsible for that exhibition) refers to the rationalized plans of Modernism when he writes, “Impatient with the confusion of our cities and unable to find a solution which would provide for the essential human needs, many of these innovators have presented radical schemes for city planning as fantastic as they are inconsistent with the structure of modern society.” He continues, “This is perhaps not the fault of these innovators, but rather of the social order under which our cities have grown up…We cannot hope to rebuild our cities without changing our social and economic structure…”[2]

In short, we cannot address a crisis in housing without a willing examination of its causes. Nor can we design solutions from the bottom when so many of the problems stem from the top. With so much evidence of both the necessary and the possible on view in such a public forum, Foreclosed presents an opportunity for an honest evaluation of what works in this country’s housing, which structures exist as impediments to equitable change, and from which direction and at what scales those changes must be made. Let’s hope we can take advantage of that opportunity, considering not only how and where we live, but why.

[1] Aronovici, Carol. “Housing and Architecture.” The Bulletin of the Museum of Modern Art, October 1934: 2.

Leah Meisterlin is an architecture and urbanism researcher and designer, based in New York City. She was the lead researcher and coauthor of The Buell Hypothesis, with Reinhold Martin and Anna Kenoff, at the Temple Hoyne Buell Center for the Study of American Architecture. www.leahmeisterlin.com.