Frank Lloyd Wright Through the Eyes of His European Admirers

A small exhibit at the Art Institute of Chicago unpacks a Dutch magazine’s obsession with the American master.

A small exhibit at the Art Institute of Chicago unpacks the early 20th-century Dutch magazine Wendingen’s obsession with the American master. Above: A 1921 cover design by El Lissitzky

All cover images courtesy the Ryerson and Burnham Library

One hundred years ago it was much harder to expand the traditional boundaries of architecture than it is today. The reasons for this are easily identified; it’s now infinitely easier to move people and information across the globe. For an example of the long and laborious process it once took to coax divergent design traditions into architecture’s discriminating canon, it’s necessary to enter another quiet sanctum: The Ryerson Burnham Library at the Art Institute of Chicago.

On display at the Art Institute’s art and architecture research library through February 16, Our Most Distinguished Outcast: Frank Lloyd Wright and Wendingen, shows how one obscure Dutch magazine broadened the borders of design, and seized on Wright (quite obsessively) as the mechanism to do so. During its run from 1918–1931, editor Hendrik Theodorus Wijeveld put together eight Wright-themed issues of the art publication, seven in 1925 alone. Wijeveld and Wright’s close relationship was long and laborious, played out over long-hand letters and years. In Wright, Wijeveld saw a fellow traveler who had command of a broad, foreign (to European eyes) cultural milieu, which he could reach into at will and produce works of stunning originality. Before Wright became something like a commonly held religion, he was a radical upstart, and Wendingen caught this upswing.

The magazine was strongly affiliated with Eduard Cuypers’ Amsterdam School of architecture, which compelled stolid brickwork into expressionist curves, waves, and cones. Unlike its opposing Dutch design ideology, the proto-Modernist De Stijl championed by Piet Mondrain, the Amsterdam School wasn’t interested in remaking society in strict accordance with a tabula rasa manifesto, preferring instead to freely aggregate influences and traditions. It eventually lost influence to De Stijl, a conflict Erich Mendelsohn described as “the opposition of a cool and analytic objectivity to an emotional and romantic individualism.”

Wendingen (Dutch for “turning” or “upheaval”) was often a house organ for Cuypers’ school, but its eclecticism brought in artists from other traditions, such as Diego Rivera and Russian Constructivist El Lissitzky. It’s this artistry and sense of craftsmanship, well displayed at Ryerson Burnham Library Senior Acquisitions Assistant Anna Feuer’s exhibit, that made the magazine stand out. Each issue was a 13-by-13-inch square, block-bound with Japanese-style raffia string. The covers were singular experiments in typography, lithography, and etching. The cover fronting a 1928 issue about Hindu-Javanese sculpture depicted elaborately jeweled women lounge gracefully before a gold background, their black dresses converging together in a pool at the bottom of the page, like a mysteriously seductive tar pit. The cover of a 1919 issue on reinforced concrete featured two ghostly faces beneath a swirling skystamped in ink with mottled imperfections that call to mind concrete’s own texture. 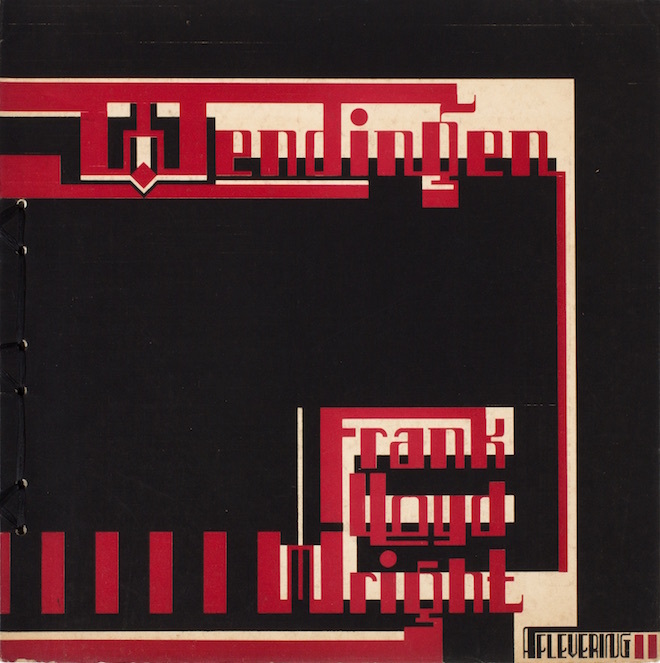 Between 1921 and 1931,Wendingen released eight issues devoted to the work of Frank Lloyd Wright.

Inside each themed magazine were carefully curated photographs of exquisite objects, both designed and natural, often presented with little commentary: ancient pottery, marionettes, crystals. The scale could fill a horizon (aerial photography) or be held within one’s hand (shells). Or maybe there would be a piece about Hungarian poetry or theater. It was as much a catalogue of the visual culture surrounding architecture as a document of architecture itself.

The small Chicago exhibit is presented simply through a handful of magazines arrayed in seven vitrines, but it would have benefited from more obviously indicating where its narrative sequence begins. The show’s name is printed on a title card that’s no larger, or otherwise differentiated, from the rest of the expository text. The displays defy the urge to touch these century-old curios and their delicate string-wrapped binding. But there are still other ways the curators could have given visitors a more in-depth, intimate experience of them, and it’s disappointing that there isn’t the opportunity to page through an entire issue (which has been, instead, digitized and displayed on an iPad).

Wendingen’s run caught Wright at a relative low ebb. His business was already slowing before the onset of the Great Depression and was scandalized, if not sunk, by the local petty bourgeoisie for his running off with a client’s wife, Mamah Cheney. From 1914-1925, Wright’s home base at Taliesin was destroyed by fire (twice) and witness to the grisly murder of seven, including Cheney. It was Lewis Mumford in Wendingen who subsequently called Wright “our most distinguished outcast,” a label that pegged Wright’s outsider status before he came roaring back with a slew of commissions in the 1930s that would keep him out of foreign art-house fare like Wendingen and on the tip of every upper-middle class dinner partier’s tongue in the pages of Time.

Wright, like Wendingen, had been plying shores unfamiliar to the Western architectural canon, expanding its vocabulary with influences from across the globe. Around the time Wendingen was launched, Wright began work on the Hollyhock House in Los Angeles, which used pre-Columbian, Mayan motifs to great effect. A 1921 Wright-themed issue of the magazine looked at his Imperial Hotel in Tokyo, exploring Asian design traditions. While Wendingen‘s guest editors were sorting through Javanese pottery, Wright was designing with Islamic-influenced perforated screens.

No longer can one man’s experience, not even Frank Lloyd Wright’s, push architecture past its own horizons.

This eclecticism, for Wright and the Amsterdam School’s Wendingen, was displaced by the ascendancy of International Style Modernism, leaving them both kindred spirits floating just outside the zeitgeist, sorting through anything and everything for a way back in. Wright would practice for another three decades, and have time to find it. Wijeveld’s magazine, meanwhile, lasted only 13 years.

Our Most Distinguished Outcast is most engaging when it makes clear the circuitous web of influence that was radically reshuffled as Modernism formed on architecture’s horizon. In the early 20th century, Wright sprung from the vast interior of a new nation, sitting astride the world like a colossus, with nary a World War to scar its shores or halt its furious gulps of city-building. He developed a design language attuned to the Midwestern prairie, and applied it to everything—buildings, furniture, home goods, and art itself. But just as his work was entering a wider public consciousness and trickling into academia, it was eclipsed in the architectural academy in favor of a bolder European program of building mass workers housing. As Tom Wolfe recalls in From Bauhaus to Our House, Philip Johnson, curating the landmark MoMA International Style Modernism exhibit in 1932, dismissed Wright’s work as “half Modern,” a not-quite-polite euphemism for “half relevant.”

Wendingen’s loose-limbed appreciation for visual culture seems singular for its day, but there are parallels to be found in today’s design media. The publication’s sense of hand-made construction and care calls to mind the staple-bound zines you might peruse at an indie bookstore, but its content forecasts today’s experimental design journals, like Iker Gil’s MAS Context, which catalogues, for instance, the design of political campaign buttons, Chicago’s unrivaled collection of alleys, and imperfections in the production process for Jelly Belly jelly beans.

Today’s atomized, splintered, and Instagrammed design industry (and the media that covers it) are unlikely to luxuriate on a single designer for the ostensible goal of expanding architecture’s marketplace of ideas. There are just too many conversations flitting in and out of earshot to linger on any one auteur reverently. And this is also a symptom of architecture’s nascent (and not always successful) attempts to diversify its point of view. No longer can one man’s experience, not even Frank Lloyd Wright’s, push architecture past its own horizons.