A 1945 dormitory for members of a spiritual commune in southern India is an enduring example of architecture’s capacity for nuanced experiences.

It’s a block of high, obscure concrete walls. No name, no signage, just a wooden door with a tiny lotus symbol engraved on it. I walked in, left my shoes at a rack, felt the soles of my feet on the cool stone floors, and looked upon Golconde. The first reinforced concrete construction in India, beautifully aligned to the tropical climate, built not just to house the disciples of a spiritual guru but also to enhance their meditative experience.

Golconde was built during 1937-45 in Pondicherry, a French colony in the south of India, on the shores of the Bay of Bengal. The city was home to the reclusive philosopher Sri Aurobindo (1872-1950), who was joined by Mirra Alfassa, a French artist and spiritual seeker later known as The Mother. Together they established the Sri Aurobindo Ashram in 1926, a commune where people came from all over the world, drawn to the teachings of the prolific writer and spiritual guide. It was the Mother who envisioned Golconde as a home for members of the community, and contacted Tokyo-based Czech architect Antonin Raymond to design it. Raymond and his wife visited Pondicherry, stayed a period of eight months and found themselves to be deeply influenced by the place and the people. In a letter dated October 1935, the architect wrote to the Mother, “I would not like you to be shocked by the appearance. We are laying the foundation of a new kind of architecture.” Amidst Pondicherry’s French Colonial and the Tamil vernacular architecture, Golconde’s straight lines and concrete form work was certainly radical and experimental. But there was another experiment underway. Raymond wrote, “the purpose of the dormitory was not primarily the housing of the disciples; it was the creating of an activity, the materialization of an idea, by which the disciples might learn, might experience, might develop, through contact with the erection of a fine building.”

After setting up the initial design and construction, Raymond and his wife left for the US, entrusting the project to their associates, Czech architect Francois Sammer and Japanese-American woodworker George Nakashima, who also became a member of the Ashram and was re-christened Sundarananda, which translates from Sanskrit to “the one who delights in beauty.” 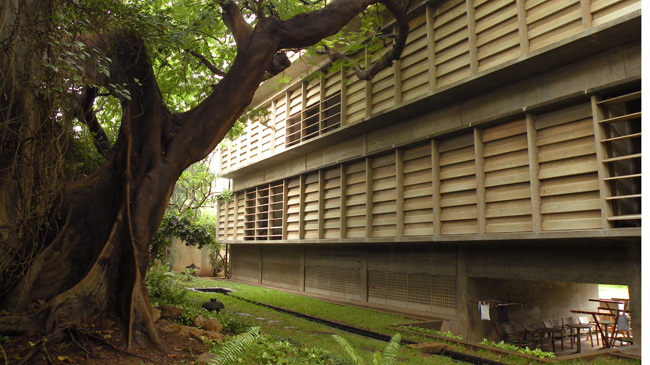 Architects Antonin Raymond and George Nakashima gave the building a number of site- and climate-sensitive features, including louvered walls and lush landscaping.

Golconde has a simple plan of two long wings, hinged at the middle with a stairwell. Single rooms are lined up along a corridor that runs the entire length of the building. There are three floors, with a half basement that acts as a utilities space and provides a lovely semi-open area for an afternoon tea ritual. The long ends of Golconde are set north to south, leaving only the short ends with their small surface area directly exposed to the sun, keeping heat absorption to the minimum. Possibly the most remarkable feature of the building is that the entire length, on the front façade and back wall, is fitted with louvers that can be opened and shut as per the weather. Every morning, I was able to almost unclothe the space by opening the louvers within the room, as well as those across the corridor in front of the room, leaving the space and oneself open to the outside.

It took some getting used to. On a memorable night at Golconde, it rained heavily and even through the shut louvers, the thunderous storm felt terribly close. I felt drenched in the sound of the monsoon rain, while being cozily huddled in bed under a mosquito net. It was exhilarating and calming at the same time.

The room itself is furnished austerely in Nakashima-made woodwork—among the first he ever designed—consisting mostly of a bed, desk, and closet. It dawned on me at some point that being around fewer things gives you room to be with yourself. Walking the long, often empty corridors, with light filtering in on one side through the horizontal louvers, feels like a deep, contemplative walk. The teakwood sliding doors on the other side are made with staggered slats that can be closed to give you complete privacy, but don’t deny you the sea breeze. 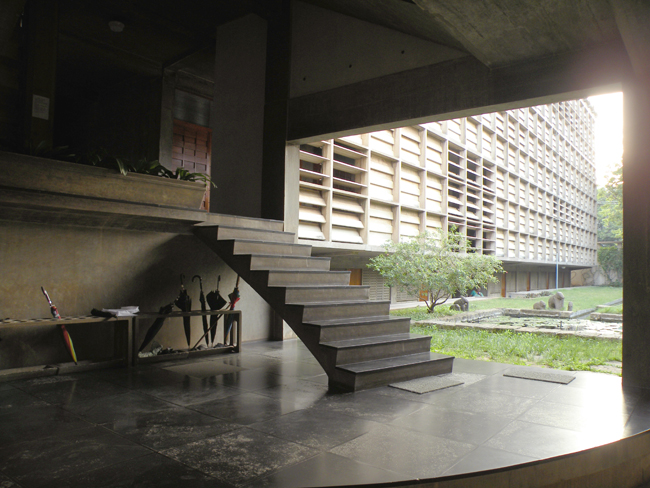 Golconde is a quiet, meditative space, in keeping with the spiritual mission of its inhabitants. Despite its concrete construction, the building aspires to lightness in all its details.

The making of Golconde was marked by several unusual but endearing practices. It was built by a team of devotees who lived in the ashram, a mix of skilled and unskilled workers, some of them with no prior construction experience. Nakashima wrote in his notes, “Golconde was something of a do-it-yourself project. I found myself not only the designer, but something of a general contractor.” Workshops were set up to custom-make fittings specifically for Golconde. The ashram members donated brass utensils like cups, bowls, and plates, which were melted and recast as bolts, hinges, and door handles. Various materials were sourced from abroad, like steel rods from France and equipment like combustion engines and sawing machines from Japan. Nakashima wrote in his book, The Soul of Tree: “Since Pondicherry didn’t have a wharf, the steel was brought in from a freighter anchored in the Bay of Bengal on boats made of palm trunks lashed together. By the time they were unloaded on the beach, the steel rods had been bent so that they looked like a mass of spaghetti. From the shore they were dragged by bullock carts to the building site, where long lines of laborers hammered them straight.”

An essential idea in Sri Aurobindo’s philosophy of Integral Yoga is that we all have the capacity to create a spiritually conscious life within the limitations of an earthly human existence. It encourages an action-oriented approach where one must work towards salvation and in honesty and beauty, from the inside out. It does not seem unrelated that within spending a few days at Golconde, the philosophy reveals itself in the experience of the building. In its ascetic simplicity, unity of materials, removal of anything that is not essential to the life within, harmony of the interior and exterior, Golconde emerges as an example of an architecture that makes you more aware of your body, your movements, and thoughts. In the body of a building, it is possible to experience a spiritual moment.

Golconde continues to be a home for the members of Sri Aurobindo Ashram. It is not a guest house and cannot be checked into easily. Some requests for short stays are granted. 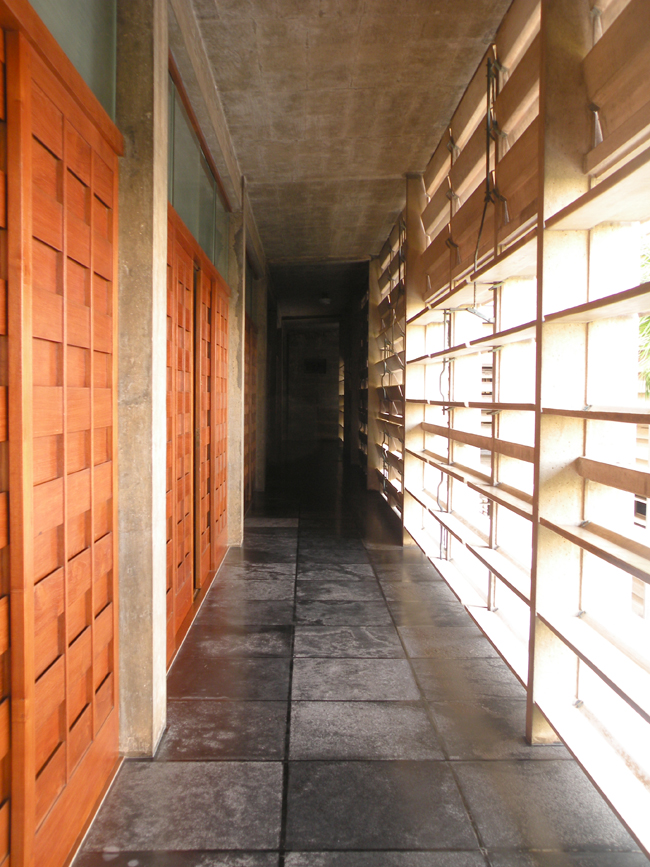 Operable louvers along the length of the building make it possible to open it up to the elements. 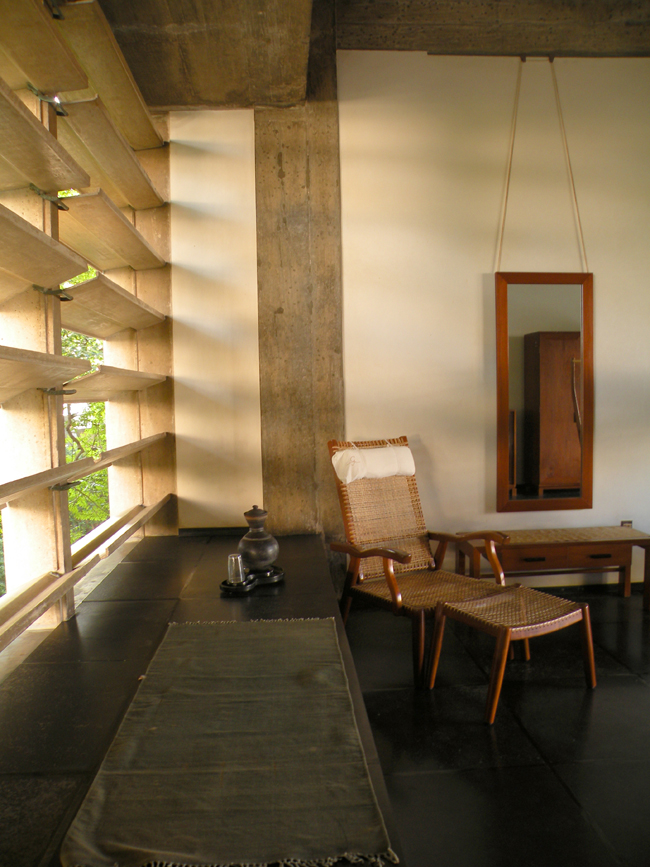 The spare interiors are furnished by pieces designed by Nakashima, who left his imprint on every aspect of the building. 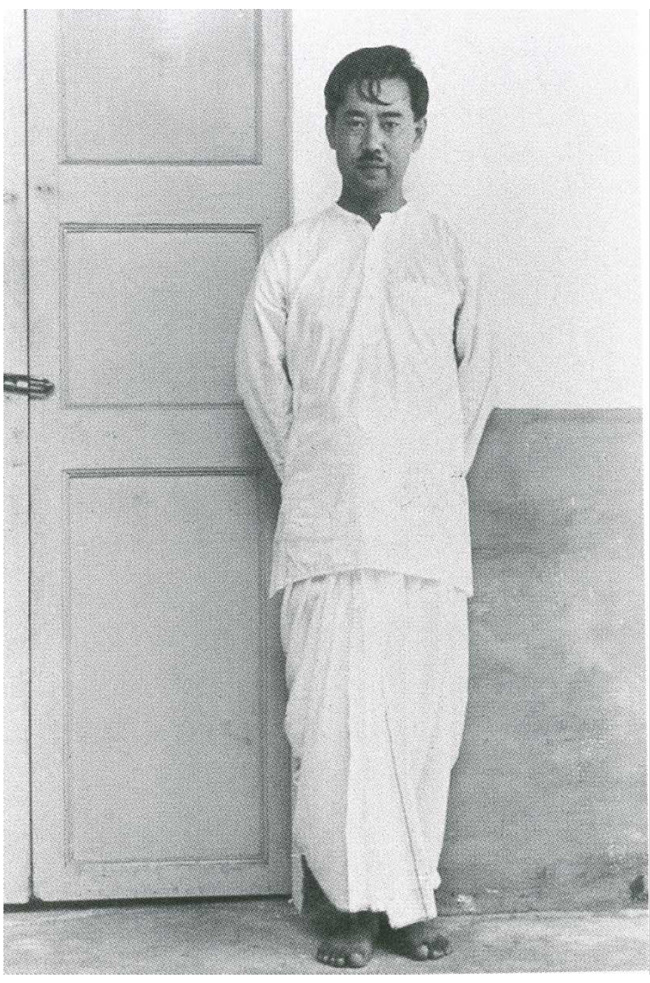 While at the Ashram, Nakashima became immersed in its philosophy and way of life, taking on the Sanskrit name Sundarananda—one who delights in beauty.