How Do We Create Healing Spaces?

We see how living patterns are signs of healthy design solutions in this series of articles about the influence of patterns on living structures.

A traditional courtyard is full of overlapping living patterns. Those combined give the subliminal message: “Linger here for pure enjoyment, and use this setting to catalyze interactions with other living beings.”

Drawing by Nikos A. Salingaros

An environment that embodies living structure allows us to live life fully. We are encouraged, not inhibited by architecture. Freed from anxiety and feelings of unease induced by hostile buildings, spaces, and surfaces, positive our emotions blossom in our subconscious.

A building designed with sufficient attention paid to the natural rhythms of human neurobiology can result in conscious joy. Think of how the tectonics of the human body, our physical appearance, can trigger sexual excitement — or not. There are many examples of how physical form, properly attuned to natural structure that can evoke a human response everywhere along the continuum of conscious to subconscious emotion (Salingaros, 2015).

Christopher Alexander and others have put considerable effort into cataloguing design patterns that resonate with and actualize our humanity (Alexander et al., 1977). Living patterns free us from environmental stresses, which come from an incoherent geometry of objects and spaces. Architecture’s capacity to protect us from stress liberates us to be more fully human, and keeps us healthy in the long term.

Living patterns underlay all successfully evolved design solutions. Generations of humans have built up their surroundings by trial and error, discovered configurations that made them feel healthy, both physiologically and psychologically. Living patterns arose through the evolution of built form, a long process of selection arising from thousands of experiments. The choice of a healthy architectural solution over other possibilities uses feedback to identify a state of increased wellbeing leading to long-term health. This process is the same as in genetic programming, where “software” evolves after millions of iterations, with variants continually selected and re-selected so the result performs the required task optimally (Leitner, 2015).

Most living patterns documented by Alexander in A Pattern Language (Alexander et al., 1977) were derived from looking at solutions that unify the user within his or her immediate environment. Their main criterion for selection was the healing experienced when a pattern is successfully applied to identify useful limits to a design. The mind-set in which this phenomenon is recognized and appreciated considers human beings interacting with their surroundings strongly enough to affect their health. A living pattern is meaningless, however, in a mind-set that treats buildings as sculptural objects that don’t naturally interact with their users or their surroundings.

Successfully evolved design solutions lie embedded in traditional architectures. The functional correctness of living patterns, considered as a set of design constraints, depends on their widespread occurrence globally. The proof is in their re-discovery among people isolated from each other in geographically separated societies. Everything else in those cultures may be totally different, but since the human body is more or less the same all over the world, socio-geometric solutions for a particular design problem ought to obey identical constraints. And they do! The sense of wellbeing generated by a living socio-geometric pattern is shared across distinct times and cultures.

Since life-enhancing patterns recur in traditional buildings, some people assume that a living pattern is merely a design solution that has been used repeatedly. But that’s not necessarily so. Many repeating design typologies are expedient for some purposes, but do not enhance human life in any way. A design template may be widely adopted because it’s cheap or industrially efficient, or because it serves the interests of some group — but it doesn’t lead to a healing environment for its users. It’s not a living pattern. In fact in many cases, it could actually degrade the living qualities of the environment.

An enlightened approach to healthy design therefore requires a catalogue of tested living patterns for handy reference. Such a list would help to avoid confusing them with repeating inhuman typologies that are not alive (called “anti-patterns”). One list exists in A Pattern Language (Alexander et al., 1977). Yet how do we document other living patterns from existing buildings and urban fabric? Extracting patterns from traditional practice and deriving totally new patterns both require sensitivity and judgment (Salingaros, 2005: Chapter 8).

Table. How to observe a pattern in existing design:

The complexity of the best, most humanly adapted living configurations, which solve more than one design problem simultaneously, is high. A setting that has positive effects on the user’s wellbeing probably has several patterns working together to satisfy a combination of system dynamics (some of which are not obvious). So a researcher trying to document patterns must first disentangle them from one another. As in most scientific research, you first detect known patterns. What is left contains the new patterns. This discovery process is necessarily sequential, and cannot be achieved all at once.

Then, you may discover a set of similar but distinct solutions to a specific design problem whose common features identify them as possible living patterns. Suppose each related application shows undeniable healing effects on the user. But which particular constraint is the archetypal pattern? A choice among several variations of a common theme must be made. The optimal living pattern is the most “wonderful” — the one that works best, that gives the most healing feedback, and makes a user wish to experience its implementation as much as possible. Obviously, this living pattern will be difficult to locate. An architect must learn to identify patterns, and then design a solution that takes advantage of the mutual adaptivity arising from the ordered complexity common to living patterns.

An archetypal living pattern must deliver the strongest and most positive effect on human health and comfort for that particular circumstance. That way, it can reproduce the same healing effect when built into something new. Competing forces of expediency, fashion, short-term economy, or misguided architectural codes and zoning laws are likely to dilute a pattern in many of its applications. Finding a living pattern requires looking for the best possible built example, like a collector searching for the very finest seashell or antique coin specimen. This process of discovery presupposes experience, and a highly tuned sensitivity to healing environments.

Alexander’s The Nature of Order (Alexander, 2001-2005) correctly understands such patterns as constraints in a sophisticated system of computational design. You choose from among an infinite number of generated options that satisfy an interrelated group of patterns. All of these solutions are adaptive. The more constraints you impose, the narrower the set of good solutions. The design process may include adaptive constraints such as climate, site, orientation, interaction with the environment and surrounding structures, etc. 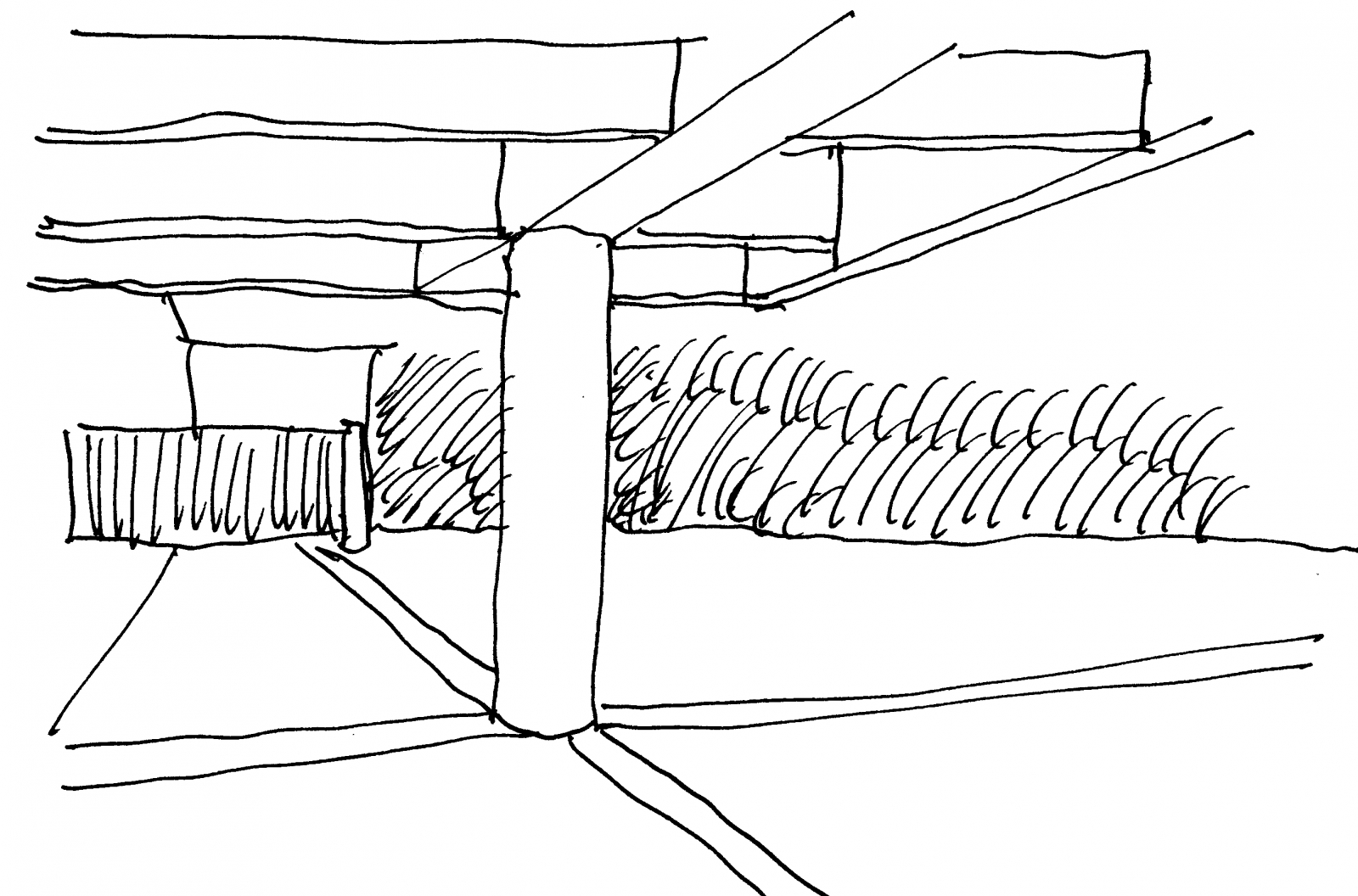 A modernist courtyard is deficient in living patterns. Its visceral message is: “Perform whatever function you have to do here — walk through, drink your coffee, talk with someone — with industrial efficiency, then get out.”

Drawing by Nikos A. Salingaros.

Mainstream practice and training claim to reject design constraints of any sort. Architects are intoxicated with the absolute power to control human lives by determining the shape and dimensions of the spaces in which people live and work. They expect to indulge themselves freely, exerting personal will on the environment. Not surprisingly, they react to the idea of living patterns with apprehension: patterns threaten the limitless freedom to design promised in architecture school.

Nevertheless, the most paradoxical (and most embarrassing) aspect of conventional design is never mentioned. The creative freedom permitted in contemporary architecture is dictated by trendsetters, power brokers, and influential critics, and is therefore severely constrained: infinitely more than the constraints implied by living patterns. For decades architects have been allowed to create anything except what has the qualities of living structure. This restriction is socialized into architectural education and in media coverage of architecture. Indeed, the architect is encouraged to violate living patterns, producing buildings whose primary result is a violation of nature.

Nikos A. Salingaros (2015) “Biophilia and Healing Environments”, a 10-part essay series in Metropolis, August–September. Published together as a booklet by Terrapin Bright Green, LLC, New York. Available from: <terrapinbrightgreen.com/report/biophilia-healing-enviro-salingaros/>