How to Design Cities on Mars? A New Think Tank Has Some Awesome Ideas

Mars City Design differentiates itself from those other initiatives by encouraging proposals that put aeshetics, well-being, and urban-thinking first.

Colonizing Mars won’t be easy: the planet’s atmosphere contains almost no oxygen. Solar and galactic radiation threaten to scramble astronauts’ DNA. And even its warmest regions experience nighttime lows of -100 degrees Fahrenheit. If humanity has any hope of settling the red planet, we’re gonna need a nice, safe place to stay.

Unlike most Mars habitation initiatives, MCD, by bringing together professional architects and artists, places more importance on the look and feel of settlements. “Our goal is, that future Martian dwellers will gain inspiration from their homes,” says Vera Mulyani, MCD’s founder and CEO.

Mulyani’s mission may sound New Agey, until you realize that psychological well-being will be very important to settlers stranded—er, living—tens of millions of miles from Earth. “Longer missions require […] coming up with stress-mitigation strategies,” says JPL Engineer Sydney Do, whose research at the MIT Department of Aeronautics and Astronautics focused on space habitation. “Aesthetics is one of several approaches that can be used to mitigate these stressors.”

The initiative has already come up with some pretty innovative suggestions. Neurosynthesis, a skeletal edifice that won the 2016 MCD competition in the infrastructure category, relies on the complete use of Martian concrete, while Instant Structure – also a 2016 winner – harnesses the power of explosions to create habitats that protect and provide safety. Other designs include Tree of Life, a structure that will generate energy from vibrations to sustain life, Redwood Forest City, aiming to create a forest-inspired settlement, and a Green Cloud City that floats above a large crater for agricultural purposes. 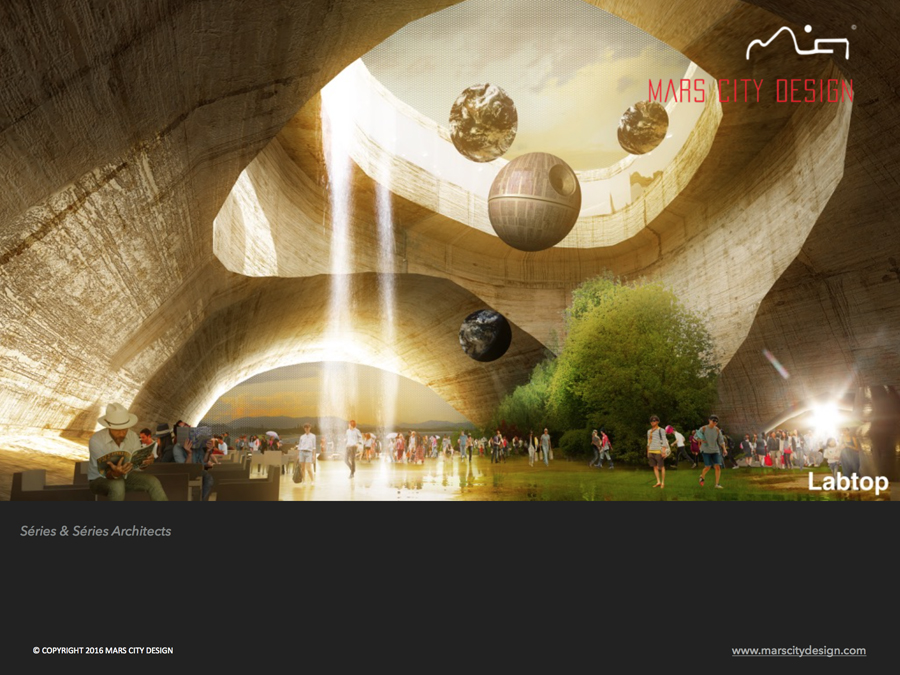 “MCD makes an important contribution through its focus on the wellbeing of inhabitants,” says Justin B. Hollander, director of the Tufts University Urban Attitudes Lab and advisor on Mars One. “To my knowledge, no other Mars-related organisations have such an explicit architectural focus.” Within the next three years, the group plans to 3D-print three to-scale habitat prototypes of Martian cities at the Reaction Research Society test area in the Mojave Desert.

MCD not only brings aesthetics into the conversation, framing it as a prerequisite for healthy long-term settlement, but also stresses the importance of planning ahead for growth, potentially to an urban scale. In the past few decades, most of NASA’s planning has centered on four to six person habitats. “Defining city-scale requirements would influence near-term design decisions on smaller scale habitation architectures that might be developed for the first human missions to Mars,” Do says.

The city scale method will help the space industry address more concrete design questions, such as selecting landing sites and outpost locations, determining infrastructure demand, logistics strategies, etc. “Thinking on a city scale is useful,” Justin Hollander said, adding that “a plan that considers a broader ‘neighbourhood’ or entire city can ensure that those first habitats of a Mars colony will be efficient, functional, and human-centred.