It Takes a Village to Build a Solar Decathlon House

How quick thinking and neighborly collaboration contributed to the success of the UT-TUM NexusHaus.

Faculty members from The University of Texas at Austin School of Architecture, Petra Liedl and Adam Pyrek, help UT students Michael Rahmatoulin and Miren Urea test the desk canopy of their NexusHaus design for the Department of Energy Solar Decathlon.

The UT-TUM NexusHaus, designed and constructed by one of the 14 teams selected by the Department of Energy (DOE) Solar Decathlon, has been deconstructed and ready to be returned to Texas. Here a team member takes a look at how the international group of students, based in Texas and Germany, began and completed the California adventure.

Students from the University of Texas at Austin and the Technische Universität München landed in Orange County on September 26, 2015. The event kicked off on Sunday afternoon, and construction began at 7 AM Monday, in the Orange County Great Park.

Our first task was to plot the points for the modules, which would inform how the whole site laid out. After careful measurement and triangulation, we were ready for the trucks to deliver. Most of the day was spent unloading the trucks and getting everything into place. Given the slope of the existing parking lot, we used a tried and true water level to achieve accurate elevations across the site assuring the house and deck would be level. As the day wore one, we experienced some unforeseen issues that could have compromised our project.

We hit the first bump on Monday afternoon when DOE inspectors asked to review our engineering drawings for the cribbing (temporary foundations) of the modules. Since we had not anticipated this requirement, we needed to find an alternate solution to our original plan. We found the answer in the true spirit of the competition– the generosity and helpfulness of the other teams played a huge role in our solution.

Our neighbor to the south, Sacramento State University, lent us approved cribbing, so we were able to make more units from 2x4s and eventually lowered the modules into place to drill the foundation piers. “Those guys [Sacramento State] are great! They’ve been incredibly helpful [through construction], and we’re happy to be their neighbors,” said Charles Upshaw, UT-TUM team captain. The sense of camaraderie and community amongst competitors brought out the best in everyone during the construction process and continued throughout the competition. 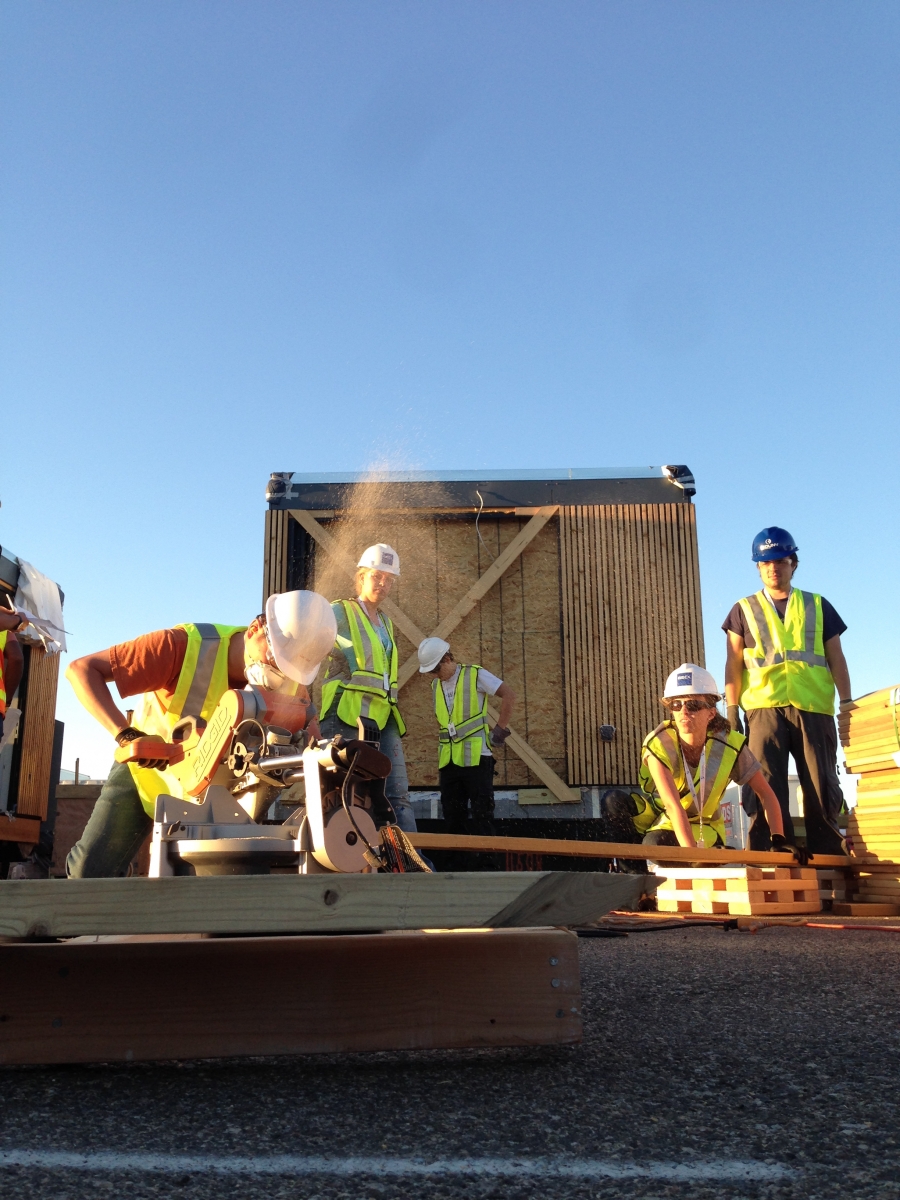 The following days were a whirlwind of on-site activity. The Solar Decathlon village was open for construction from 7 AM to 2 AM every day, and most nights were just as productive as the daytime. With the modules in place, we were able to drill the foundations for the deck columns and to erect the steel columns and beams. The entire canopy assembly had not been assembled previously in Austin, so there was a learning curve in figuring out how to get everything built, safely. Again, we were helped by a neighbor. Clemson University generously lent us a Genie lift to raise the beams into place. Without this apparatus, our team would have been forced to rent additional equipment, adding both cost and time to the construction process.

Lifting the beams into place was one challenge, but drilling the bolt holes proved equally time consuming. We ended up going to a local metal fabricator with our steel structure in tow, because the tools we had on-site would have resulted in countless broken drill bits. With the steel structure in place, we raised the ‘nexus’ canopy in between the day and night modules. Simultaneously, the ramp and deck teams worked furiously to assemble our sizable outdoor space. 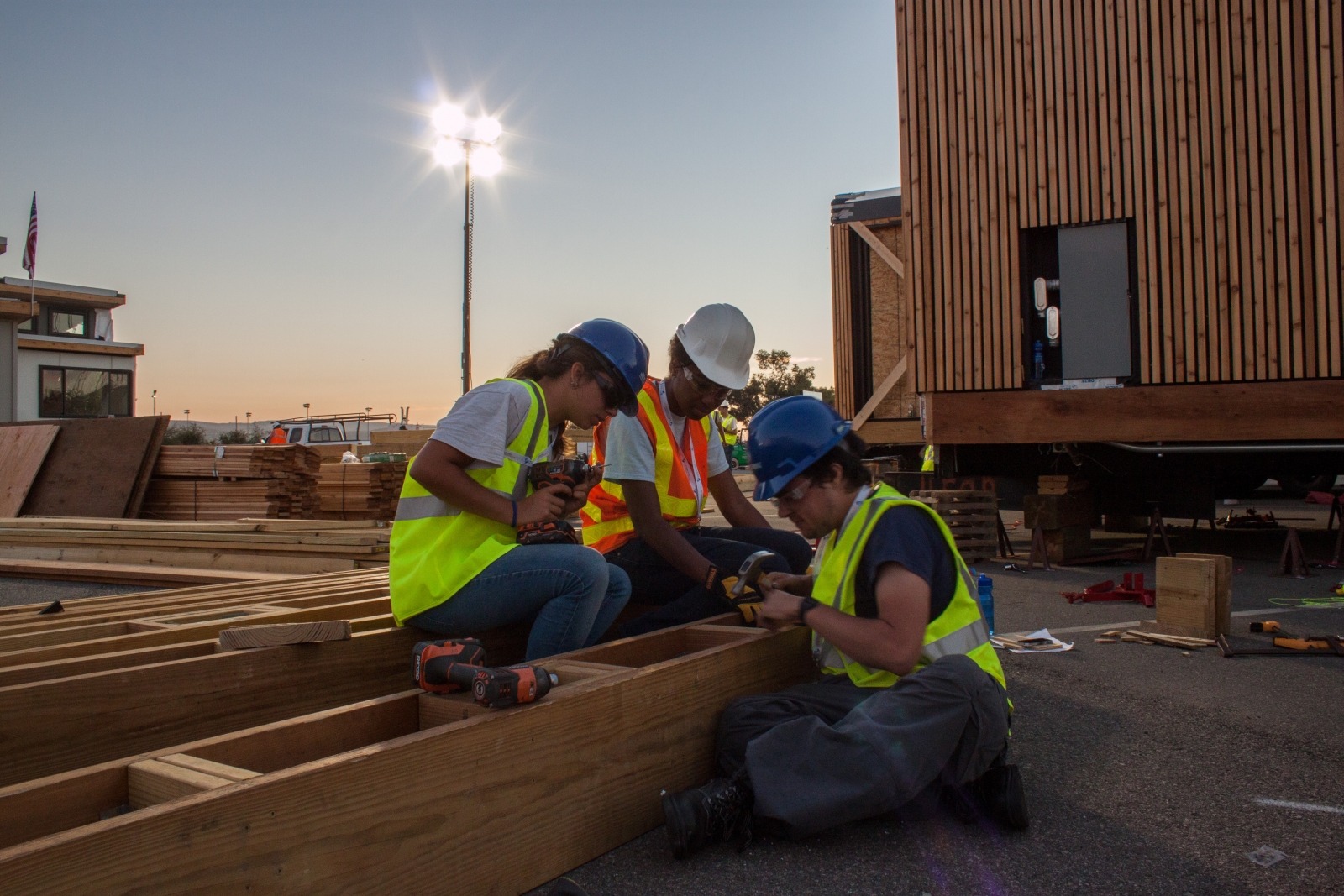 On the interiors, cabinet doors and the bathroom sink proved the most time-consuming as we had to reconcile the original custom design of the storage system with the appliances and IKEA panels at our disposal. “The original design called for custom cabinets; however, our budget didn’t allow for that,” said Kendall Claus, architecture graduate student at UT. “It was a challenge to achieve the look we wanted with off-the-shelf components, but it provided us with a true look into the opportunities that budget constraints can provide.”

While each of the problems we faced presented it’s own challenge, it was on the final day of construction that our team was confronted by the biggest problem. After connecting to the grid, we discovered some unforeseen electrical issues. This left us without air-conditioning in one module and also with many lighting problems. Aside from being unable to regulate the temperature and humidity properly, the exhibition days went extremely well.

The architecture and mechanical systems were well received by the public and jurors. We placed in the top five for Market Appeal, Home Life, and Communications; placed third for Engineering; second for Affordability and tied for first in Commuting and Energy Balance. Our team is incredibly proud of the overall accomplishments of NexusHaus and look forward to seeing where the Solar Decathlon experience takes us in the future! 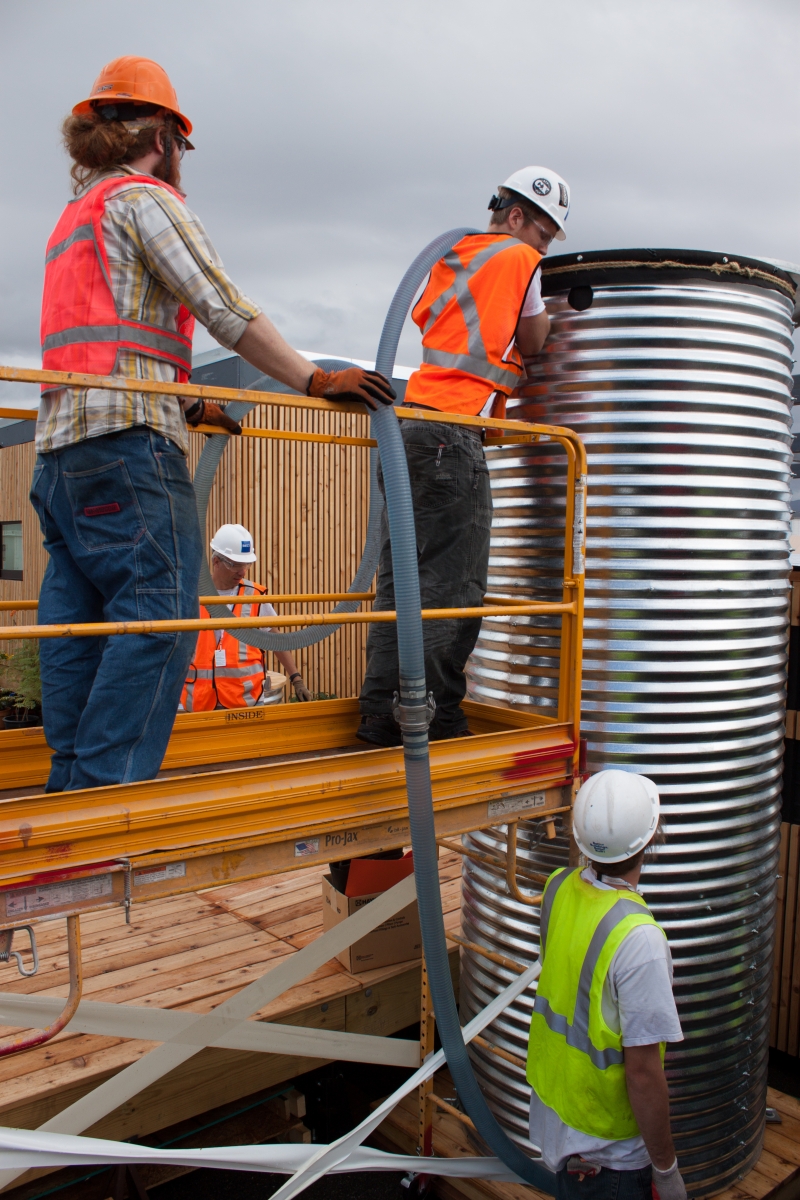 In the next post from the NexusHaus team we will recount our favorite experiences from the public exhibit days, both as decathletes and as visitors to our fellow competitors’ homes.

​NexusHous, as the other Solar Decathlon projects listed below, is sponsored by Resource Furniture, known for manufacturing sustainable and efficient living solutions.