For Iwan Baan, Modernism is not merely the old adage that “form follows function,” nor is it an idealistic, uniquely Western European architectural vision that can be easily transported globally. Instead in his book, Brasilia – Chandigarh: Living with Modernity, Bann shows how fluidity dictates all things, from buildings to definitions. Baan’s goal was to […]

For Iwan Baan, Modernism is not merely the old adage that “form follows function,” nor is it an idealistic, uniquely Western European architectural vision that can be easily transported globally. Instead in his book, Brasilia – Chandigarh: Living with Modernity, Bann shows how fluidity dictates all things, from buildings to definitions.

Baan’s goal was to document the changes that have occurred to both architecture and master urban plans over the past 50 years in both cities. We decided to interview him on his expedition in Brasilia. He began by “researching Oscar Niemeyer’s architecture, the elements of Lucio Costa’s urban plan, yet also the history of the construction of the city.”

As he sees it, “At the advent of Modernity, utopic [sic] aspirations were at play, as well as notions that today we find preposterous. For example, the vast networks of roads were designed so that every person could have a car, which today we find so misguided.” Which leads to questions regarding what elements would be instrumental in shaping our cities in the future. Says Baan, “Urbanism in Africa is increasing at unprecedented rates. Ultimately studying cities like Brasilia and seeing where they work and where they didn’t can inform our future city planning.”

In fact, what Baan discovered was that some of the most resilient elements of the city were not part of any grand vision: “One of the most vibrant neighborhoods is in fact the housing that was quickly built for the vast numbers of construction workers. The housing is still there, some fifty years later, and the neighborhood has a much more intimate scale for living.”

It is this ability to see beyond the standard architecture photographic trope of glorifying built structures as paeans to man’s genius, that makes Baan’s photographs so interesting: “Architects are interested in showing both the overarching design of the building as well as the details. Architecture for me is the frame for my subjects, and the background for interactions. I am fascinated with architecture because it is a profession that is future-oriented. Thus, a new project can often test out new ideas in the social sphere.” But as his photographs demonstrate, “Real-life never follows the plan, and people often behave differently than the urban design dictates.” 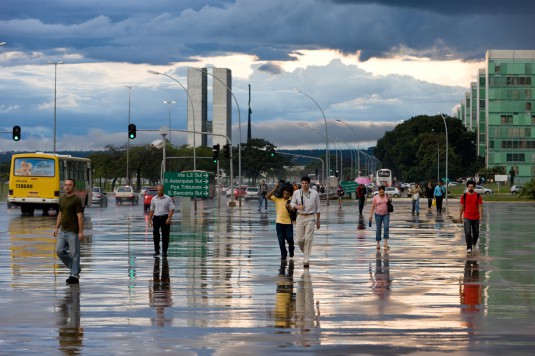 Indeed, his photographs reveal the inherent fluidity and flexibility of even the most seemingly comprehensive architecture plans. Spaces conform to those who use them, and thus Baan focuses our gaze on the people: “Foremost is to communicate how people use the space, and usually a story comes out of it… The people are the ultimate jury of a city. The monolithic, smooth shapes of Niemeyer express the ideals of Modernity, however people interact with their surroundings in ways fully out of control of the architect and city planner. I was interested most in how people inhabit the city, and adapt their surroundings to their needs. Much of life takes place in the corners, fringe and pockets of the city, as opposed to the grand, open plazas intended for interaction.”

In the end, Baan’s approach is to seek the unique, “I don’t intend to make a comprehensive statement on the people… Instead, the images are frames that communicate distinct, idiosyncratic and sometimes intimate moments that I find in daily life, in going where there are people and seeing what happens… There’s no general rule to what happens, and it’s the unexpected diversity in everyday life that makes the project interesting.” 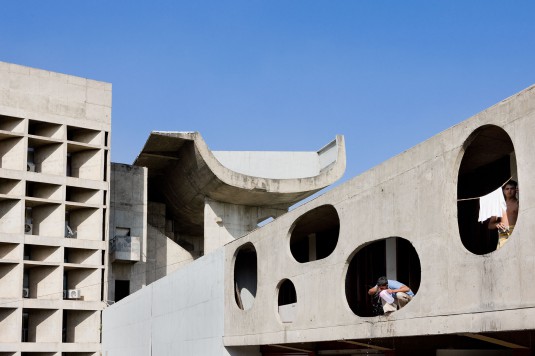 Sherin Wing writes on the business and culture of architecture for ArchDaily.com and is co-author of The Indicator. She is a contributor to www.metropolismag.com and Archinect.com. She also researches and writes on architecture in developing economies. She received her PhD from UCLA in the Humanities and co-authored the forthcoming book, The Real Architect’s Handbook: Things I Didn’t Learn in Architecture School, with Guy Horton.