In an unlikely partnership with Maharam, the celebrated product designer brings his analytic rigor to textiles. 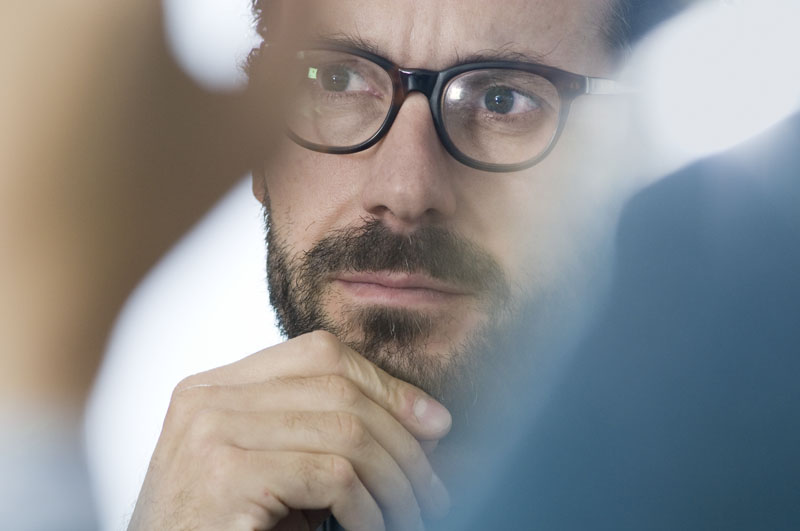 In 2008, the German designer Konstantin Grcic entered into an ongoing collaboration with leading textile company Maharam on a line of textiles applicable for domestic, workplace, and health-care scenarios. As of April 2015, four textiles have been released—Drape, Rise, Fold, and Emboss.

The aphorism “truth to materials” belies a roundabout logic. A design can transcend the sum of its parts only if the distinctive qualities of those parts, or materials, dictate its form. It’s also a turn of phrase often applied in straightforward terms to the work of Konstantin Grcic, the Munich-based industrial designer who has established a storied reputation over the past two decades for the rigorous materials research and industrial-leaning processes that inform his furniture, lighting, and product design. His 2004 Chair One for Magis, which launched Grcic into ubiquity, offers a case in point. The strength of its die-cast aluminum frame supports a slender, basketlike seat—no additional supports or ornaments necessary.

As he did with Chair One, Grcic begins almost every design by analyzing the fundamental qualities of a material, typically solid. It’s a cerebral approach that cuts across his varied projects and explains, in part, the designer’s numerous accolades and innumerable devotees. One such admirer, Michael Maharam, former CEO of the renowned textile supplier to architects and interior designers, challenged Grcic to develop an innovative line of designs that the company would produce for upholstery. Maharam had previously proposed similar collaborations with other leading designers, such as Hella Jongerius and Paul Smith, who possessed expertise in other design disciplines.

Intrigued, Grcic accepted the offer, and, in 2008, embarked on an enlightening passage into the world of textile production. “It was definitely a completely new adventure,” Grcic remembers. As of April, he and Maharam have produced four nonwoven textiles (and counting) that reexamine the technological parameters of nonwoven manufacturing. Vinyl upholsteries Drape and Rise were released in 2013, and polyurethane versions Emboss and Fold are due out this month. The latter set represents a leap for the industry, one that is particularly surprising given Grcic’s untutored orientation toward the subject matter.

Between the aluminum Chair One and the 2014 Rival Chair for Artek, with its laminated birch frame and polypropylene seat, Grcic has designed a wide variety of chairs that almost uniformly eschew textile upholstery. “It’s always interesting to me, this branching out into new areas of work,” Grcic says. “This unknown terrain is promising because it suggests that there is something new for me to learn.” While initially unfamiliar with the ins and outs of textile design, Grcic had decades of experience working with new or little-understood materials for his product designs. “He’s done so much in terms of transforming materials, that we knew he could do the same for us and for our nonwovens,” says Mary Murphy, senior vice president of design at Maharam. For Grcic, the opportunity to experiment with “one of the most exciting and, always, one of the most innovative materials” was irresistible, he says. “Nonwovens are the most industrialized form of textile production, and that really appealed to me.”

Grcic’s four textiles for Maharam are especially rare, then, for their insistently man-made, factory-produced appearance and texture.

The textile-design process was an immersive learning experience for Grcic, who began his research into the project where industrial-scale manufacturing typically ends: the factory. “I had no idea what it meant to ‘produce’ textiles,” he admits. To find out, Grcic toured mills across Italy and Switzerland, studying their manufacturing techniques and photographing the machinery, individuals, and factory protocol that comprised industrial textile production. He returned to Munich preoccupied with the disconnect between the factory floor and the resulting upholstery product. “You think the textile itself is so light and soft and quiet, but production means heavy tools and heavy physical action,” he says. Shortly thereafter, he compiled these factory snapshots with additional images into the first of three process books that chronicle his explorations and inspirations in nonwoven textile design. As Grcic explains, “We tried to stay very close to that experience of what we’d seen at the factories.” 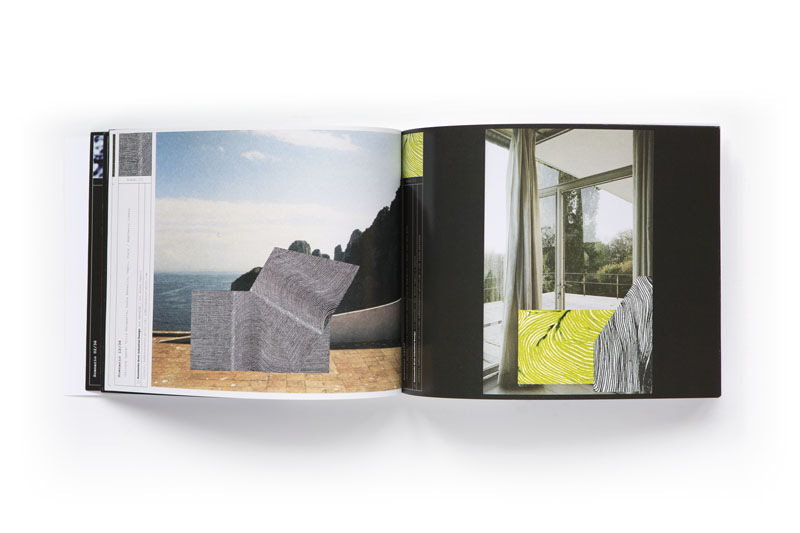 The first of Grcic’s process books for Maharam, dated January 2009, is devoted entirely to montages such as these. For Grcic, the technique is as natural for him as freehand sketching is for other designers: “Somehow sketching doesn’t seem to work for me—our process is different. And I have to always defend myself for that.” 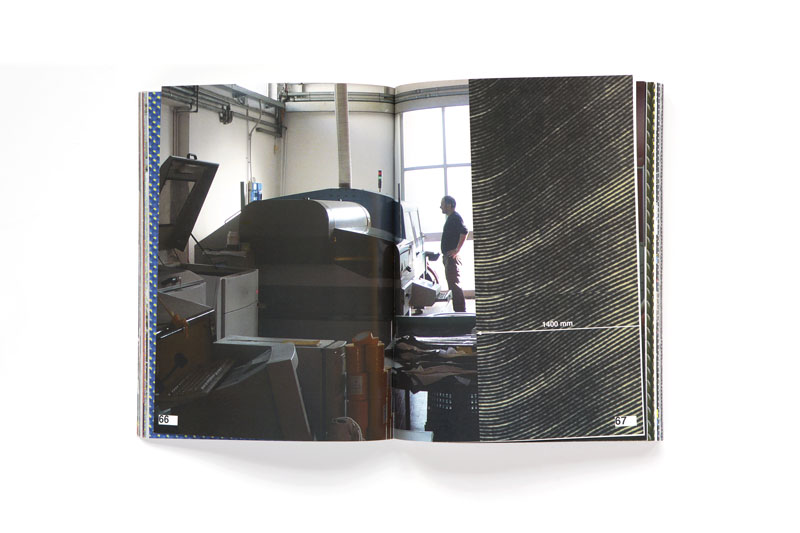 Grcic’s foray into nonwoven textiles began in textile mills in Italy and Switzerland, which he traveled to in the hopes of gaining insight into fabric production. He documented the floors of these factories in a series of photographs, later compiled into the second and largest of the process books, titled Under Construction and dated April 2009. 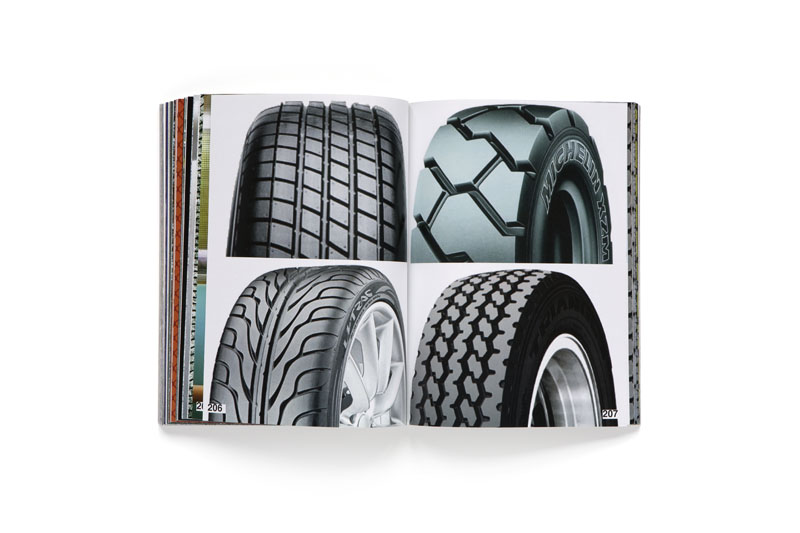 The books attest to a design process both rational and highly associative—the analytical rigors of research and the more subjective whims of inspiration converge in them, and, correspondingly, in the finished textiles. Grcic did not make separate books for each textile, and seeing as his collaboration with Maharam spans years and continents, there are no thoroughly linear narratives to account for the development of each textile. Rather, he develops patterns, textures, their variations, color schemes, and applications across all of the books, selecting from hundreds of pages of imagery to piece together the details of each individual textile. The books often function like raw data to that end.

“Konstantin does a lot of versioning, so any one pattern that he did, he probably made 30 patterns just to get to it,” says Megan Younge, a senior designer at Maharam who has worked directly with Grcic throughout the almost seven-year-long project. Despite the effort, Grcic hesitates to confess that he isn’t completely satisfied with Drape and Rise. “I didn’t find vinyl very challenging,” he says. Neither did vinyl particularly excite Maharam, Murphy concurs. “At first we had thought to focus on polyurethane, because it’s less impactful on the environment than vinyl is. Our interest is always to be as intelligent about that as possible.” But the embossing technology did not yet exist for polyurethane when Maharam and Grcic first approached textile mills about producing Drape and Rise. Their hand forced, they chose to use vinyl rather than abandon the designs altogether.

“The materials for the second stage of the project better indicate the direction that we always wanted to work—to use polyurethane,” Grcic explains, referring to the material evolution embodied by the new textiles, Emboss and Fold. Given the void in embossing technology for polyurethane, he worked with Maharam to help the company’s mills determine the specific type of polyurethane and temperature necessary for the pattern to hold. Grcic developed his own design by embossing paper, he says, “to simulate the kind of creases that happen on a fabric’s surface.” The studies were abstracted into drawings of intersecting lines and hyperbolic curves, which were combined in further drawings to create the Fold pattern. The pixelated print that Emboss bears is lifted from a piece of factory machinery covered in small, refracted surfaces that can be found in the first process book. These textures, more complex and subtle than those of Drape and Rise, follow from the technology developed to produce them. “The material for Emboss and Fold is of a more refined quality,” says Grcic, “and there are so many more possibilities for what you can do with it.” 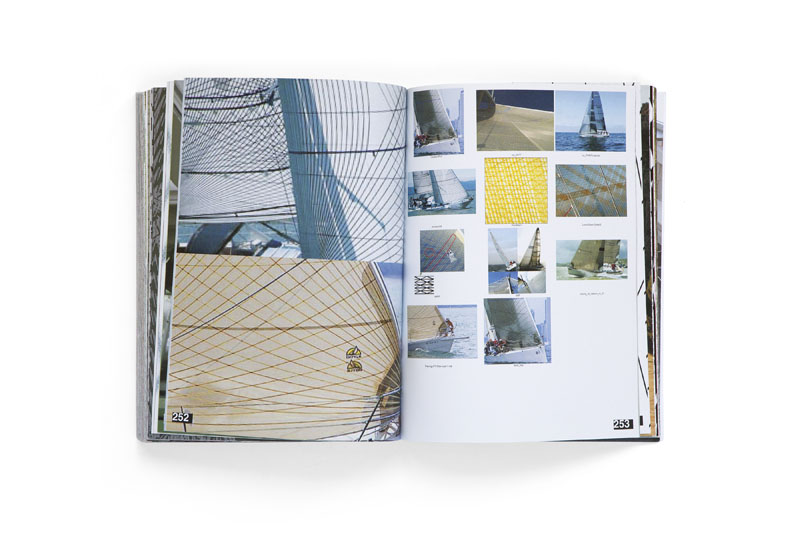 It seems that Grcic’s outsider status amid Maharam’s seasoned textile experts proved to be one of the German designer’s strongest assets. He developed the embossing technique for Fold through a series of tests using just paper—an unusual starting point for a textile. By folding and creasing sheets of paper, Grcic stumbled across a new, entirely unconventional kind of embossing. 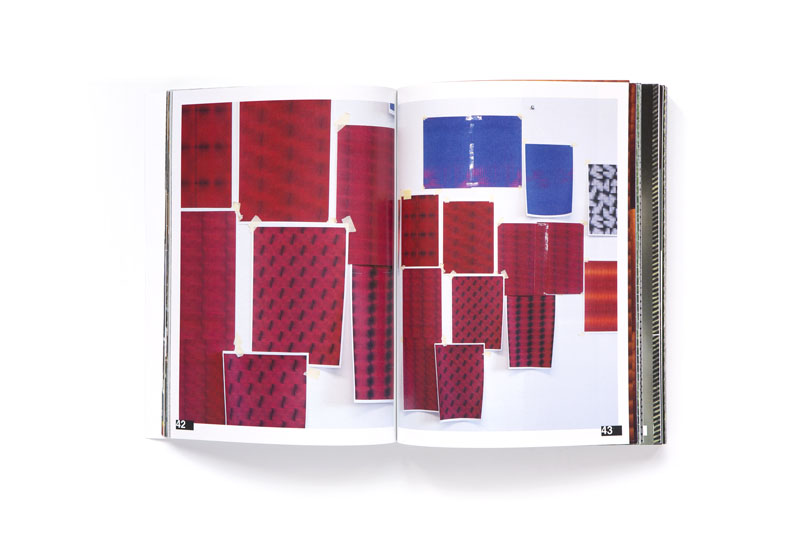 With textiles Emboss and Fold, Grcic and Maharam introduced a new embossing technique that could be applied to polyurethane. “Embossing polyurethane didn’t work originally for two reasons: temperature and the type of polyurethane,” says Younge. “It was a combination of finding the right polyurethane and the exact right temperature. It’s pretty technical.”

Grcic knows that users are likely to do particular things with the textiles, and his process books show numerous efforts to anticipate those circumstances. He collaged his designs onto numerous settings for test purposes; some examples are assuredly Surrealist exercises (one such example imagines an animated wedge of pattern poised on the roof of the Casa Malaparte). His studio also projected the patterns onto seating and walls to fine-tune their surface graphics, scale, and proportions. A process book full of hypothetical “scenarios” depicts cuboid, furniture-like silhouettes of pattern superimposed onto scenes from private interiors and public spaces. A quaint apartment library, an airport waiting lounge, and the Galerie Kreo in Paris—all receive this “beamer” treatment. Other pages in this book feature blocks with gradients overlayed onto a depicted scene, occupying a totally different plane than the underlying photograph. By highlighting the visual effect of layering, these images also reference the production process for both vinyl and polyurethane, namely, various layers pressed together under heat.

Such scenarios demonstrate numerous applications for the textiles but also proudly proclaim that Drape, Rise, Emboss, and Fold are unabashedly synthetic fabrics. Vinyl and polyurethane upholsteries often come with leather-like finishes that attempt to obfuscate the manufactured, artificial quality of such nonwoven textiles. Grcic’s four textiles for Maharam are especially rare, then, for their insistently man-made, factory-produced appearance and texture.

“Textile is an industrial product, a very ancient industrial product,” says Grcic. His work with Maharam adds a new chapter to that history and will contribute yet more. “We have many ideas still in those books,” he reports, and a fifth, knitted textile is already in development. Asked if he now plans to incorporate upholstery and textiles into his independent design practice, Grcic briefly lapses from his usual process of reasoning: “Absolutely! I just can’t really prove it yet.