Launch Problem: How to Make a New York Pier Kayak-Friendly

It’s an almost surreal scene—gliding on the East River on a kayak, feeling the waves and the ocean wind while enjoying a sense of salty tranquility with the Manhattan skyline as your backdrop.

Recently, Mathews Nielsen Landscape Architects completed a feasibility study to determine if kayaking could be integrated as a possible amenity at our ongoing waterfront project at New York’s Pier 42. While the study is still in progress, our research to date has allowed us to expand our designer’s toolbox and has proved interesting enough to share. This post will give you the scoop on kayak launches, their design, and perhaps even inspire you to hit the water yourself.

Location matters
Our Pier 42 project is located on the Manhattan side of the East River between the Manhattan and Williamsburg Bridges. The pier’s location is unique in that the shape of East River begins to curve north at this point, making a sudden turn at Corlear’s Hook. This shift in the river’s course (and the navigation channel) results in a “blind spot” for watercraft moving both up and down the river. 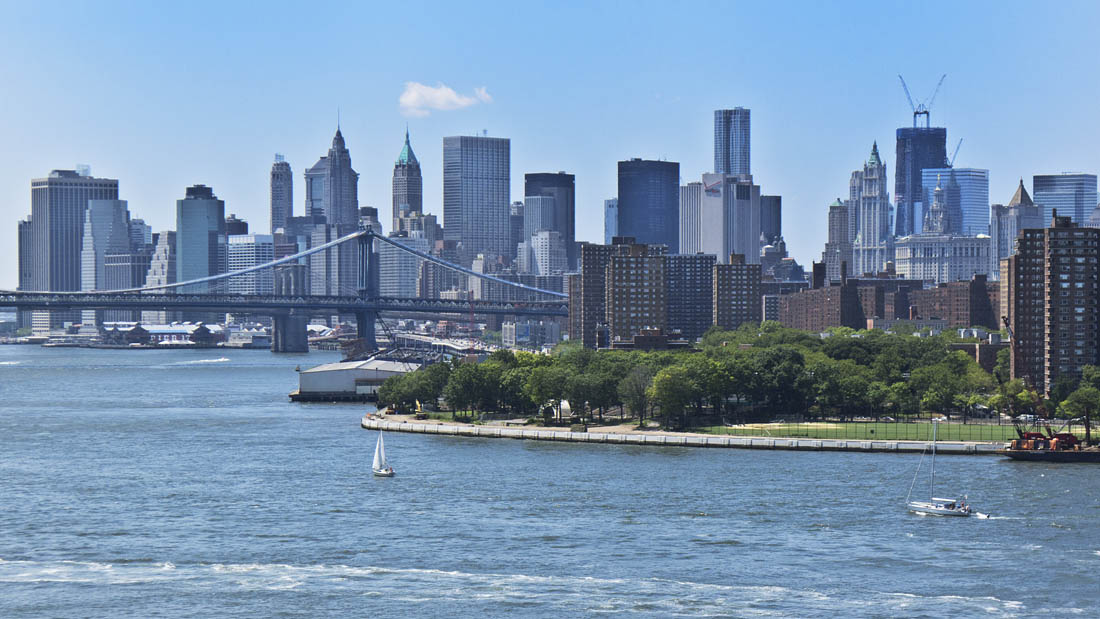 A view of Corlear’s Hook, with the existing sheds beyond at Pier 42

We consulted Nancy Brous, a member of the steering committee at the New York City Water Trail Association, to discuss siting a launch, with all necessary precautions in mind. Given Pier 42’s placement south of Corlear’s Hook, it was determined that a kayak launch would be best located away from the curve of the river there, preferably within a cove or an inlet, to mitigate the conflict between kayaks and harbor traffic. Thus, the most feasible spot was at the southernmost portion of the site, as illustrated below. 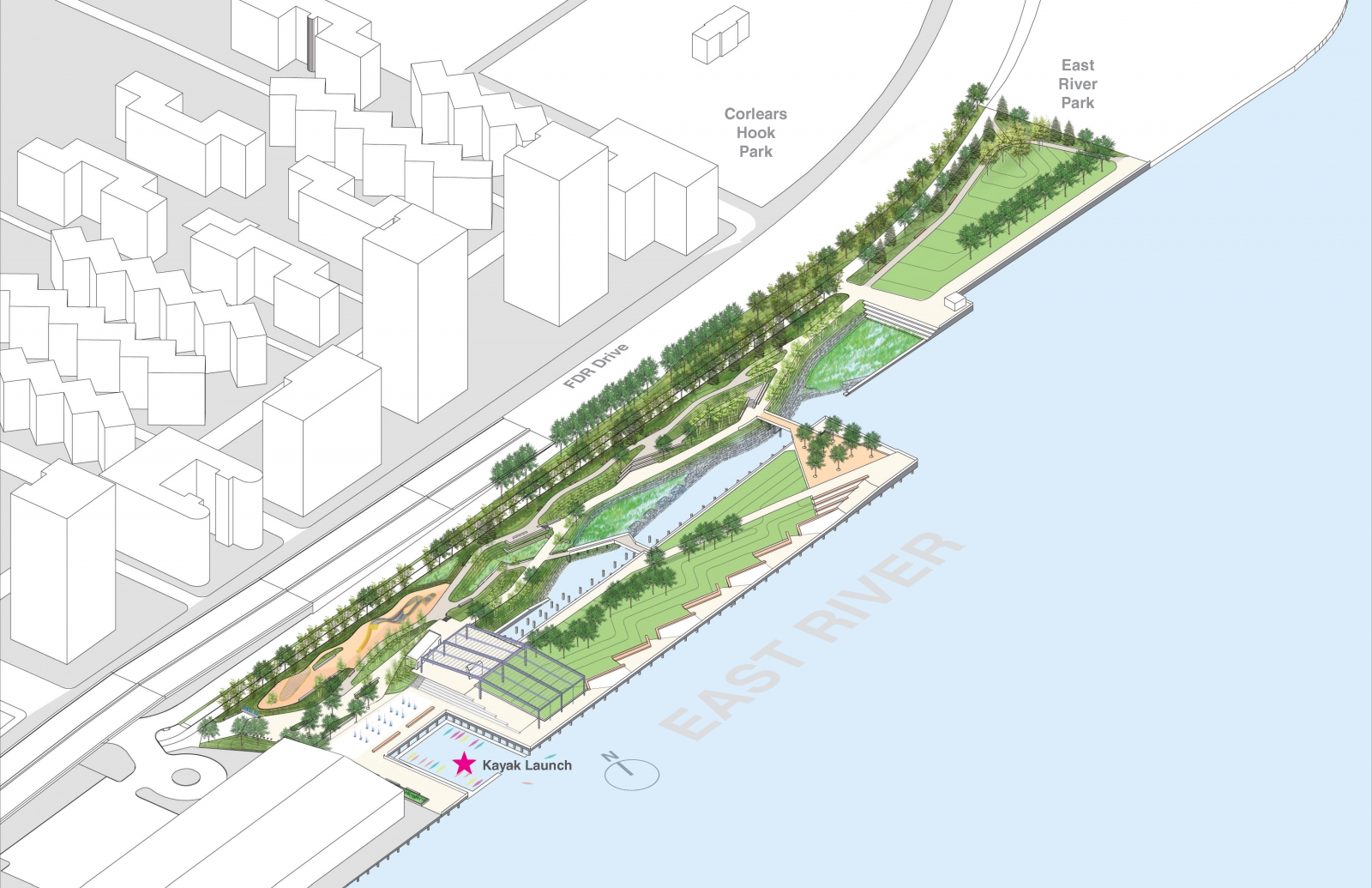 Access matters
With the “launch space” designated within the 8-acre site, the design team then studied the types of kayak launches already in use in New York waterways—beaches, ramps, and floating docks. Determining which type to use is directly related to the bathymetry (submarine topography) of the selected site and its expected launching capacity. Beach launches, such as Dumbo Cove in Brooklyn, are preferred by most kayakers because it is easier and faster to load a kayak in shallow water. 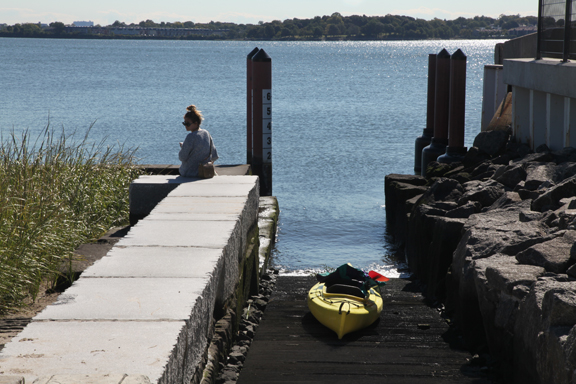 Ramp launches, such as what we see at Hunts Point Landing in the South Bronx for example, have similar bathymetric requirements to those of the beach launches, but they have steeper slopes down to the water, resulting in reduced launch area. The third type, a floating dock (as seen at Pier 26 in Hudson River Park in Manhattan), is often found in spots where there is deep water or an existing bulkhead at the waterfront.

Due to the steep bathymetry along the shoreline of Pier 42, installing a beach or ramp kayak launch would require the excavation of adjacent upland area, resulting in a loss of space for parks and other program elements valued by the community. So, with limited upland area available for the proposed park, it was determined that a floating dock would be most suitable for this type of waterfront park. 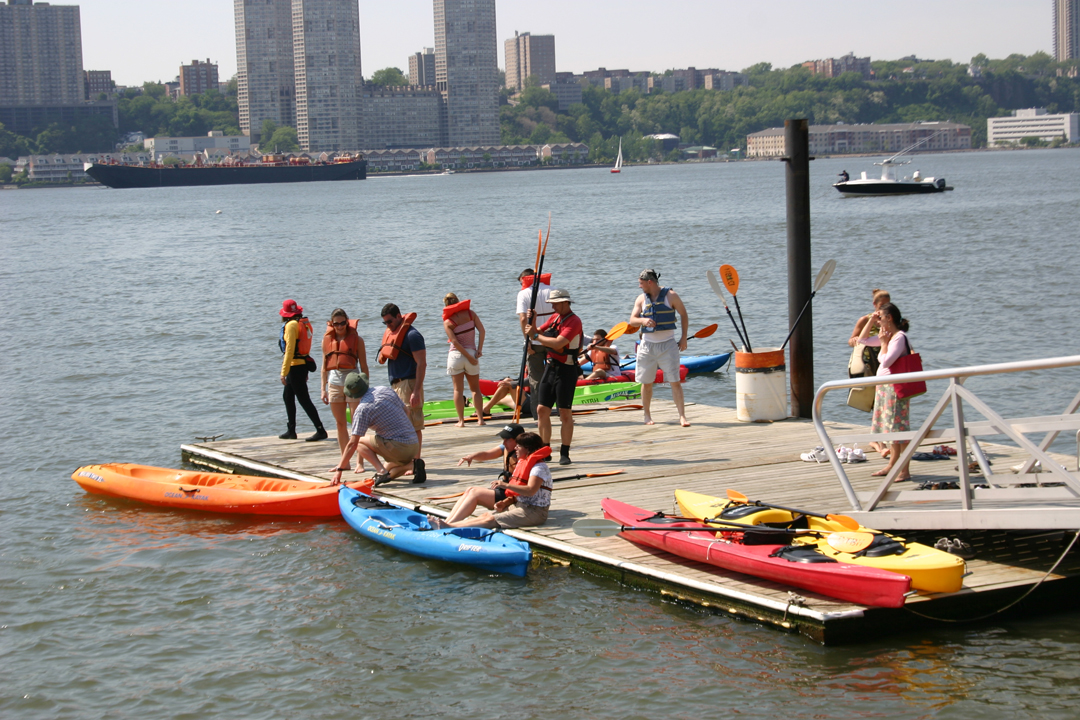 Hydrology matters
Perhaps the most important aspect of siting a kayak launch is the hydrology, or the movement of water, around and within the site. Examining the existing tides (the vertical movement of water) and currents (the horizontal movement of water) at Pier 42, the team’s marine engineer, McLaren Engineering Group, performed a series of surface current studies as they relate to the observed daily 4-foot tidal change between low and high tide.

The study showed that the velocity of water adjacent to the pier was much stronger than anticipated. In the event of a flood tide, or the current created by water coming in at high tide, the velocity of the water could get as high as 3 knots (or 3.5 miles/hour). These velocities, coupled with wake patterns from busy harbor traffic, affect the control of watercraft (including kayaks) by creating localized turbulence and unpredictable surface current conditions throughout the day. While it is possible for experienced kayakers to navigate these velocities, beginning kayakers paddle at approximately 2 knots, so a kayak launch at Pier 42 would need to be designed for more advanced/skilled kayakers due to the surrounding hydrology. 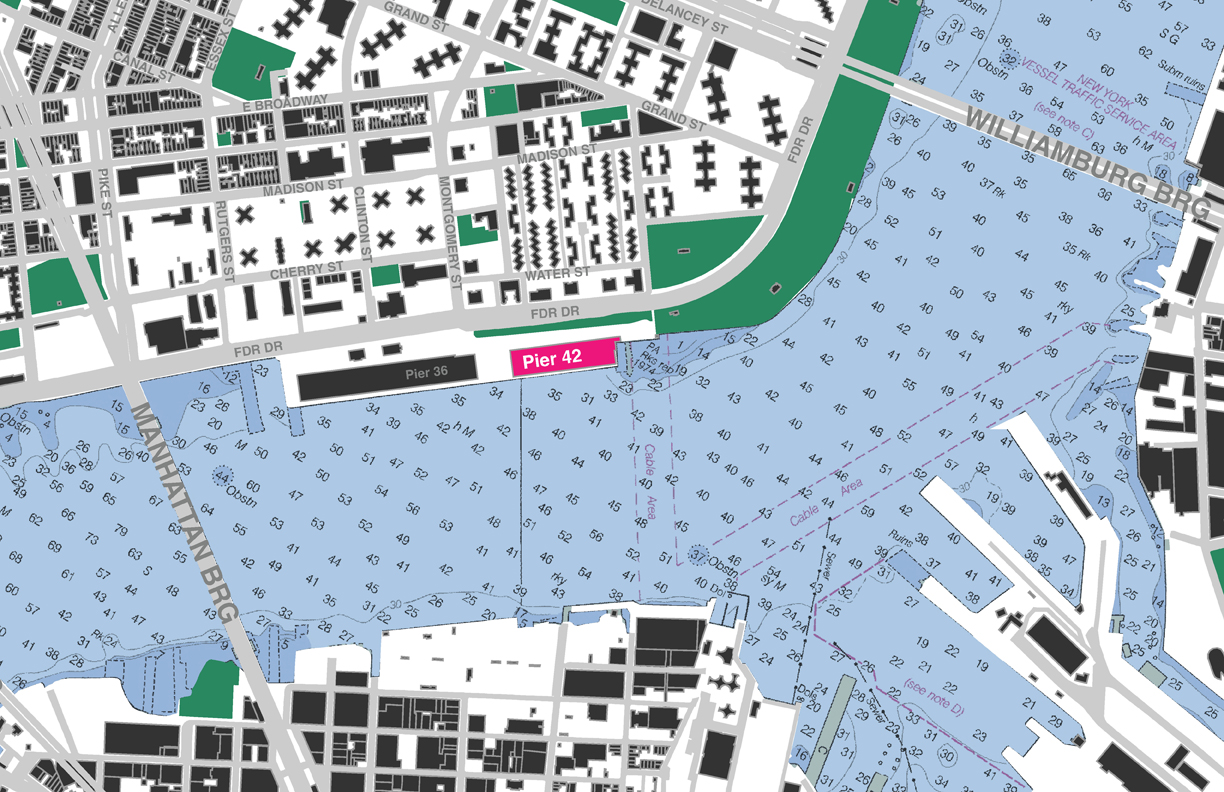 Section through Pier 42 showing the bathymetry, or subsurface topography, of the East River as it relates to the pier 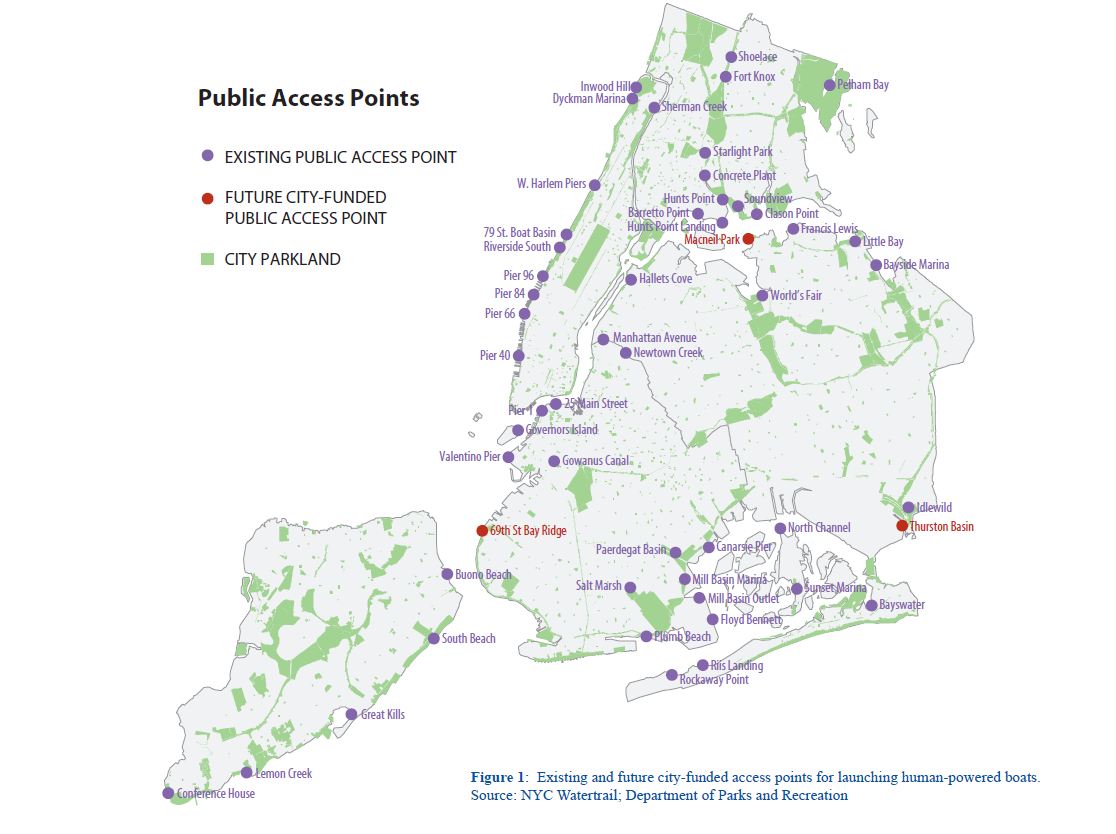 Locating a kayak launch isn’t easy!
With each of these dynamic factors to consider, identifying the best position for a kayak launch is truly a site-specific process that depends on the project’s location, hydrology, and space available for the type options. While discussions of incorporating a launch at Pier 42 continue, there are still numerous places to get your feet wet around the city. So, before fall gives way to winter, get on that slice of heaven at one of these locations and experience New York City from a brand new angle!

Xinpeng Yu is a guest writer for the Mathews Nielsen Green Team. She is an avid hiker and a saltwater aquarium owner who holds a master’s degree in landscape architecture from Harvard University. She has a special interest in urban landscape place-making through innovative social and ecological processes.

Lisa DuRussel, RLA, ASLA, LEED AP, is a Midwestern transplant, avid coffee drinker, soils enthusiast, and practicing landscape architect in New York City. Since receiving her BS and MLA from the University of Michigan, she has worked on numerous urban revitalization and cultural landscape projects in the New York and Chicago areas that combine her love of landscape and ecology. Connect with her on Twitter @LisaDuRussel.