A sprawling retrospective of design’s favorite duo reveals how conscious they were of the power of their own image. 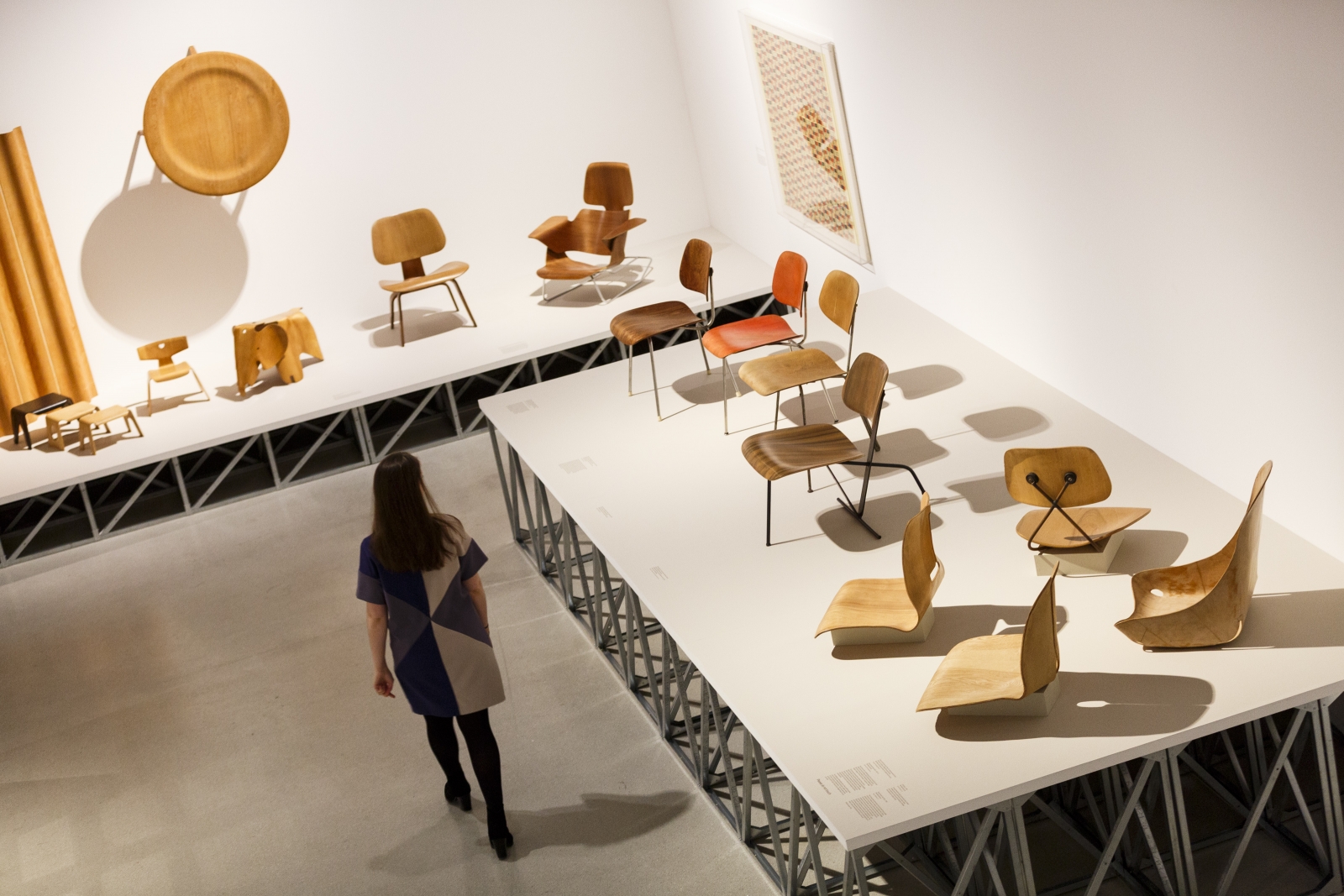 Opened in late October at London’s Barbican Art Gallery, The World of Charles and Ray Eames contains more than 380 pieces ranging from plywood furniture (above) and building projects like the Revell Toy House to video and audio installations.

Stepping out to take a breather from The World of Charles and Ray Eames, I hang back in the chilly concrete alcoves of London’s Barbican Art Centre. Almost two hours in, I am still only on the first floor of the exhibition, where playing cards and dollhouses; designs for furniture, exhibitions, and buildings; and microscopic and galactic views of the planet all hang together, vying for your attention. And everywhere too are the beaming faces of Ray and Charles themselves, posing with pride, always acutely aware of producing the image of their own work. Distilling a pithy review from a whole constructed “world” is a daunting prospect—for what more is there to say about such gilded darlings of design?

As it turns out, quite a lot. Anyone conversant in 20th-century design would be familiar, if only by osmosis, with some part of the Eames legacy. There’s the eponymous bent ply and plush leather Lounge Chair and ottoman (1956), designed for Herman Miller and classic shorthand for Mad Men-era office elegance. The endlessly imitated wire-frame and plastic seats, strewn with or without consideration across corporate lounges across the world. The (knock-off) Eames Hang-It-All coat hooks in my rental apartment, only noted that morning for the third or fourth time in three years. But this gargantuan show—comprising more than 380 objects, necessitating coffee breaks, and containing several doctorates’ worth of research—is a cosmic constellation of this prodigious duo’s multidisciplinary work.

Curator Catherine Ince allows the Eameses’ narrative to start at the beginning, through biography: he studying at Cranbrook with the younger Saarinen, divorcing his first wife to marry Ray within a month, and she training as a painter and dancer with Hans Hofmann and Martha Graham. Avoiding dullness, the show quickly gives up on strict chronology, delivering a series of thematic spaces arranged by medium, material, or project. Switching gears, the exhibition dives into the Eameses’ first forays into mass-produced design, which involved wartime experiments in molded plywood for the U.S. military, rethinking parts of airplanes, army splints, and stretchers (the designs for which saved many lives).

Two enduring principles become evident in the opening chapter of the Eameses’ arcane production. First, the melding of domestic and creative life—illustrated by the Kazam! Machine, a jerry-rigged contraption built in the couple’s first marital home to experiment with heat-bonding ply. Constant experimentation and development was necessary for the second abiding principle: a whole-hearted engagement with mass production. Charles and Ray merged Arts and Crafts sensibilities with Modernist ideals of producing high-quality design for the lowest—and most accessible—cost. In a 1972 interview, Charles recalled how the intention was always that “mass production would not have anything but a positive influence […] It would have an inherent rightness about it, and it would be produced by people working in a dignified way.”

Perhaps never before or since has a design practice been so conscious and commanding of the power of their own image.

Likewise, the Case Study House program—launched in 1945 by John Entenza, close friend of the Eameses’ and editor of the influential Arts & Architecture magazine—promoted the unabashed use of prefabricated and commonly available materials in innovative designs for domestic architecture. The Eameses’ design for their own home (Case Study House #8, completed in 1949) materialized the pair’s characteristic penchant for lightness and playful diversity: Colored plastic panels are interspersed with glass and render that fill out the steel-and-stud wall structure of the house. Standard elements such as these are put to theatrical good use in 6a’s exhibition design; qualified by its ambivalent ubiquity, a double-height stud wall frames the Case Study House display at the center of the gallery’s lower level.

Unlike earlier European schemes for low-cost housing, the Case Study House did not intend to provide universal solutions: the program, and the West Coast declension of Modernism in general, did not set out to save the scorched earth but rather to demonstrate the possibilities of a superior way of life, one that admitted the pleasures of cosmopolitan, contemporary design into the context of the everyday. The North American use of off-the-shelf materials and building components was one of free and easy consumerism, allowing the middle-class access to the glamorous quality of life seen on TV or splayed on glossy pages.

Nothing conveys this production of desire more fervently than the sheer quantity of photography and documentation presented at the Barbican. One might recall the work of Julius Shulman (that shot of Pierre Koenig’s Case Study House #22), whose iconic photography did more than most to promote the cocktail-drinking glamour of the idealized California lifestyle. For the Eameses, the practice of stagecraft ran deeper: their auto-documentation speaks of an extreme awareness of public perception. Hardly a product was made without an extensive photo shoot or film recording its assembly or manufacturing process—often with Ray, Charles, or other staff acting out the part of the user or maker.

The Eameses’ early career experiences at MGM, their Los Angeles studio, and their close friendships with Hollywood stars like Billy Wilder (for whom they designed several bespoke objects, including a chair for the energetic watching of televised sports) allowed them to effectively carve out their own media profile. In all the portraits I’ve seen of them, Ray and Charles Eames are every inch the smiling Southern California poster kids of stylish élan. Perhaps never before or since has a design practice been so conscious and commanding of the power of their own image.

The Case Study House, and the West Coast declension of Modernism in general, did not set out to save the scorched earth but rather to demonstrate the possibilities of a superior way of life.

This is further epitomized in the Eameses’ ambitious stereoscopic displays of screen-based, audio, and sometimes olfactory media, not only for their celebrated IBM pavilion at the New York World’s Fair in 1964–65—which heralded the widening utility of computing—but also in their own teaching practice. The Eameses devised multi-screen lectures in which still and moving images were compounded with sounds and smells, bombarding students with layers of information in a manner that would be radical even today. Ascending to the second level of the exhibition, Ince and 6a architects’ genius scenography reveals an almost continuous, kaleidoscopic ribbon of moving image, running across the screens and surfaces of the installation itself.

I left the exhibition at this point for another repose, reflecting on the idea of over-stimulus, the reception of too much—parsed, in the present day, through fingertips and retinal screen burn. Have we reached a peak? What about that easy consumer culture? What would Ray, with her tireless enthusiasm for craft, have made of Etsy? In an era of Oculus Rift and mass customization, the Eameses’ marketable self-image and multi-channel, immersive media seem prescient indeed.

Back inside the gallery, on the upper level the procession of chapel-like rooms lend themselves to the exploration of thematic islands in the Eames archipelago. One darkened space is dedicated to the exhilarating Powers of Ten film, zooming from micron to intergalactic scale in precise, incremental leaps; further along, there is a focus on “The India Report” (1958). Among the first to valorize the snapshot into works of analytical significance, the Eameses’ travel photographs pick out enduring concerns: celebration, ritual, and resourcefulness (as in the charming, if romantic, film about the lowly banana-leaf plate, that tableware for both the highest of Brahmins and the poorest of India’s poor).

There is more stagecraft, this time for children, in the shape of The Toy (1951), a flat-pack kit assembled tent-fashion in many variations for pageantry and performance. Across the way from the couple’s own gimcrack collections of masks, toys and boats, the Revell Toy House (never in production) was a dollhouse demonstration of the Eameses’ architectural ideas of flexible, decorated living. Handwritten and doodled instructions from Ray include the following exhortation: “Try out different ideas, and you will see that there is pleasure in all directions when you do it with care and love […] What finally matters is that your house works the way you want it to. And is a pleasant place to
be in.”

The paradox of this exhibition is its density and rigor and the sheer volume of work that has gone into its assemblage, as opposed to the inspirational lightness, the joie de vivre so characteristic of the Eames. This is the last show to be curated by Catherine Ince at the Barbican; as senior curator at the larger Victoria and Albert Museum, she will produce, one hopes, even more ambitious feats. Myself, three cigarette and coffee breaks and near-saturation notwithstanding, I’m going back in for more of that pleasure, that California sun. 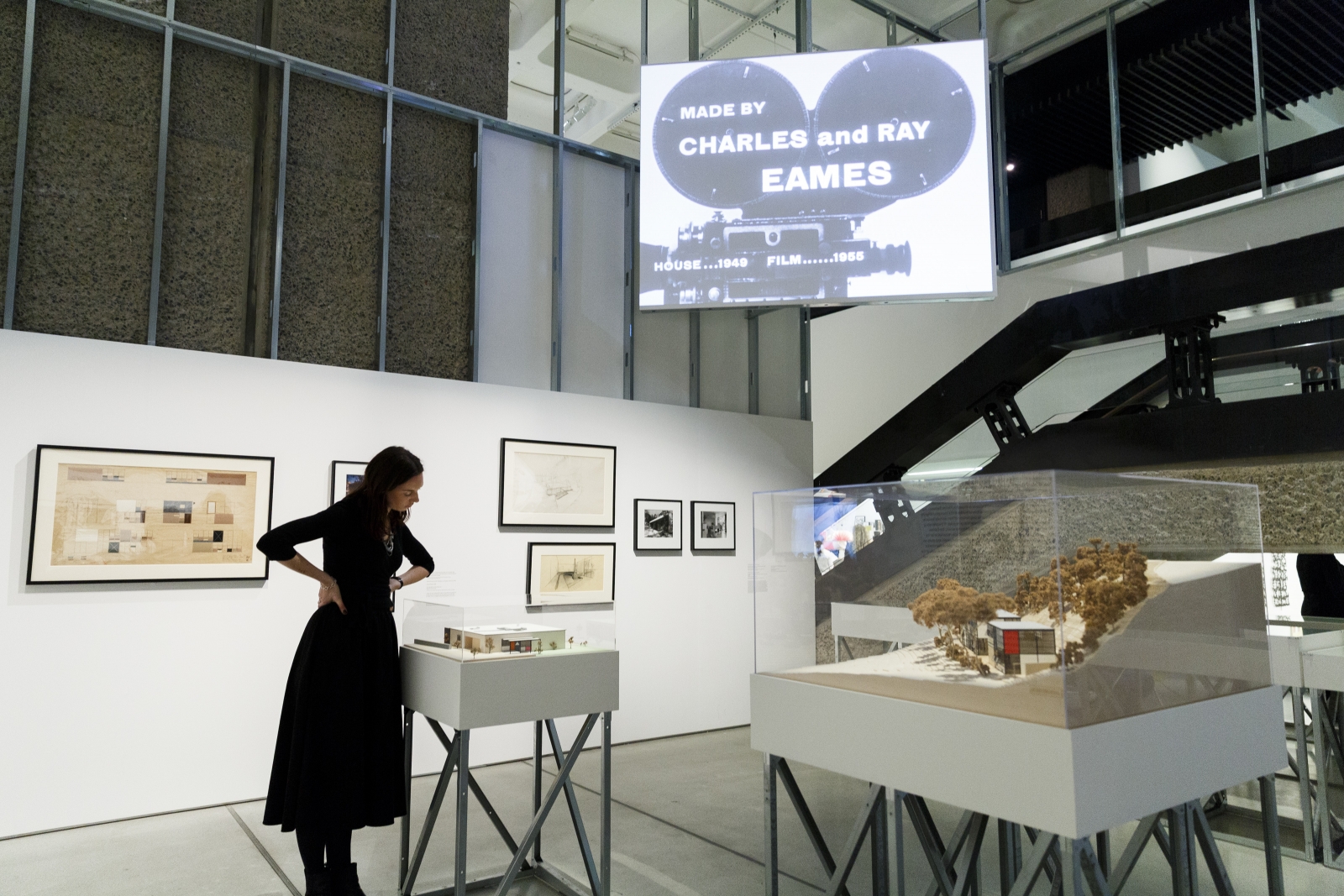 Curated by Catherine Ince, The World of Charles and Ray Eames explores every facet of the design duo’s prodigious body of work. 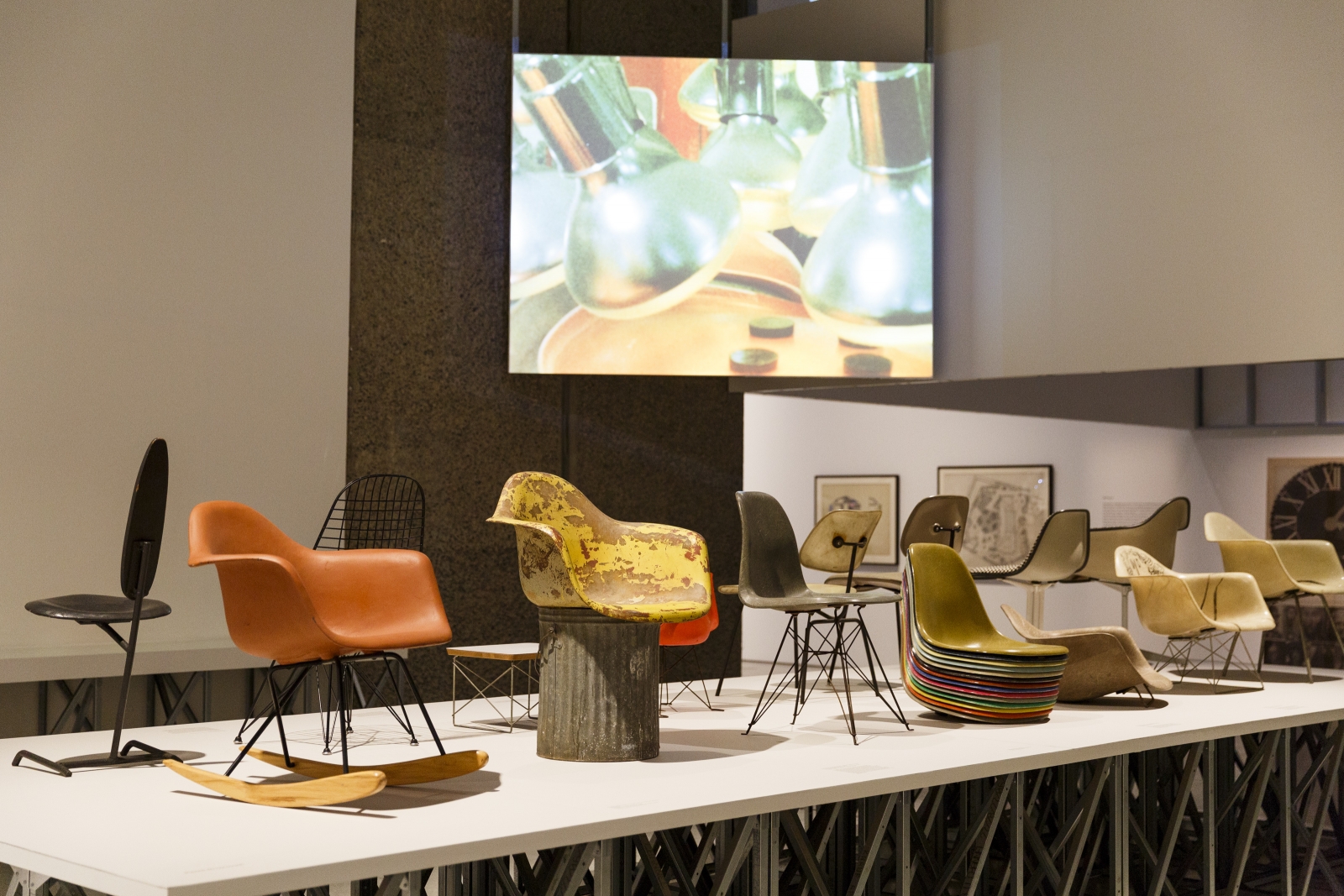 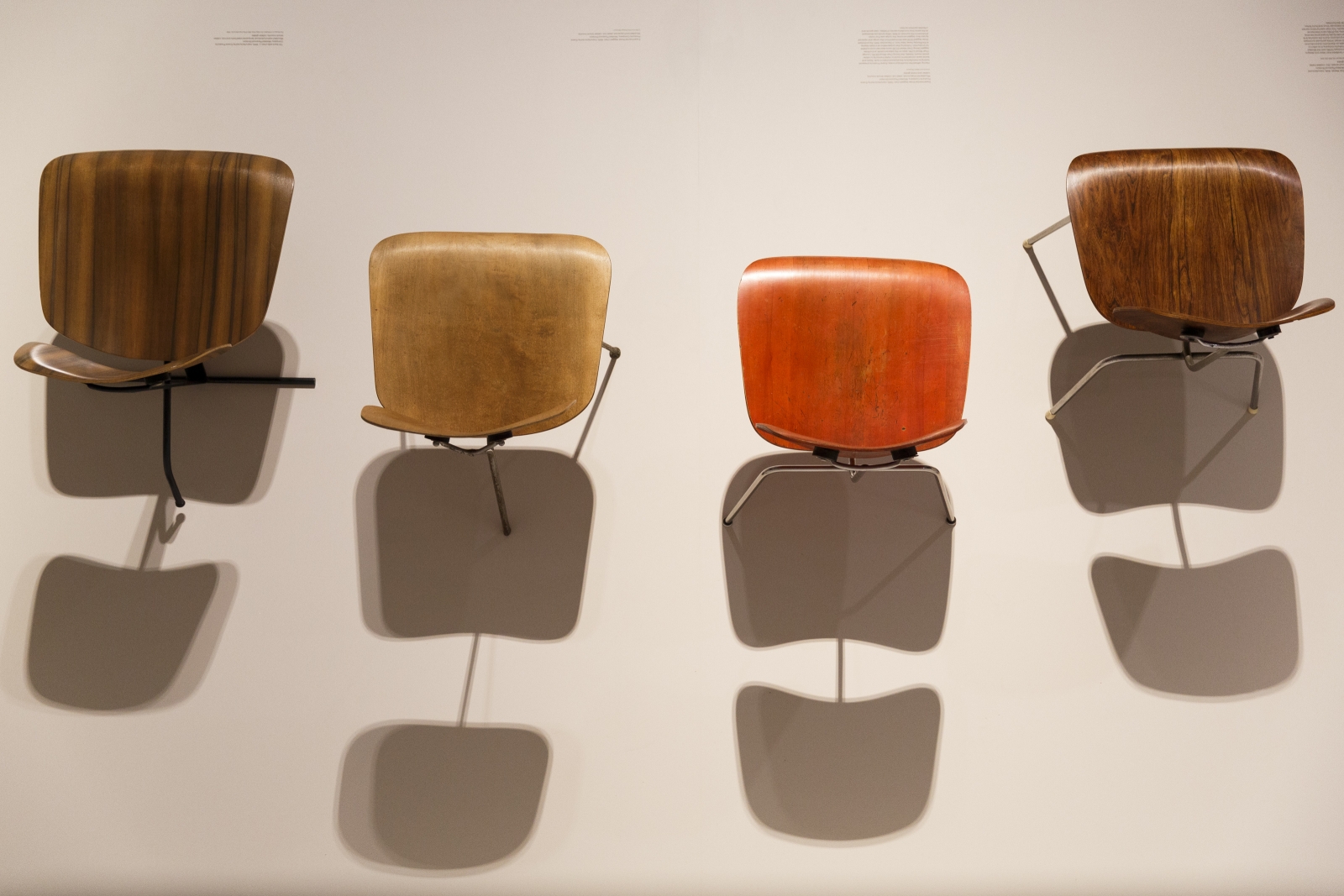 Versions of the designers’ plywood chairs are artfully posed in the exhibition’s central gallery. 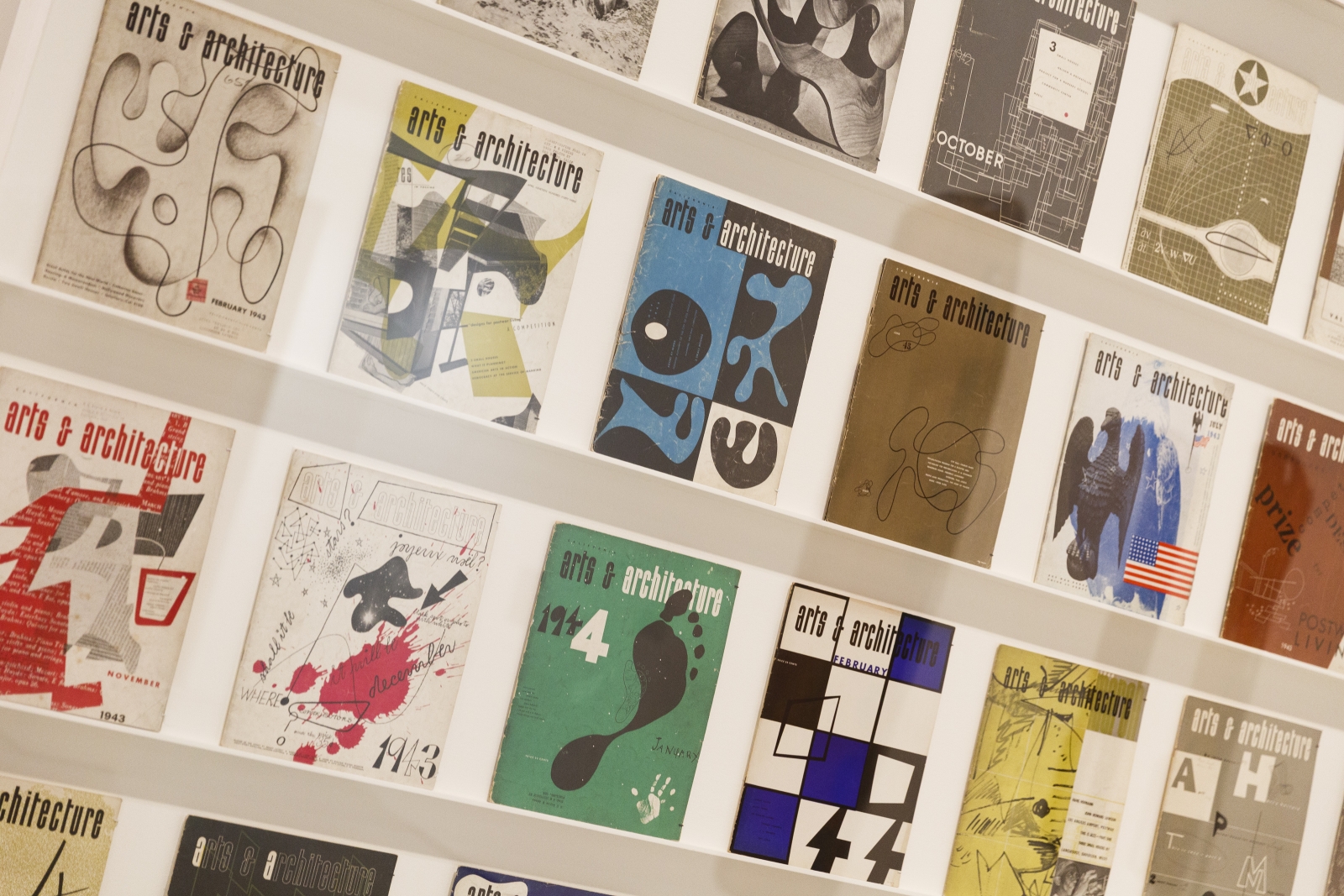 The exhibition showcases all of the 26 magazine covers Ray Eames designed for Arts & Architecture between 1942 and 1947. 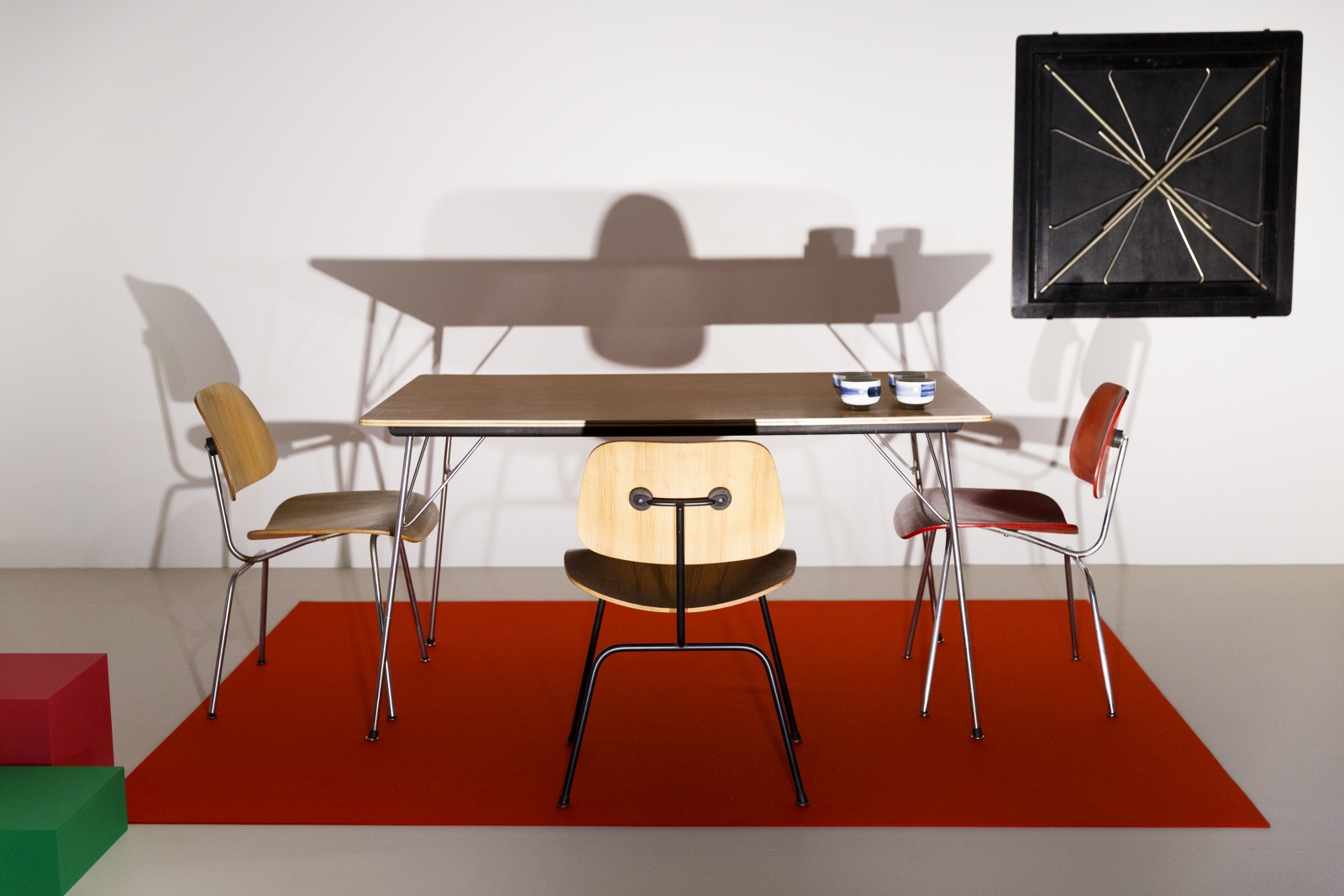 A recreation of the Eameses’ 1949 Exhibition for Modern Living 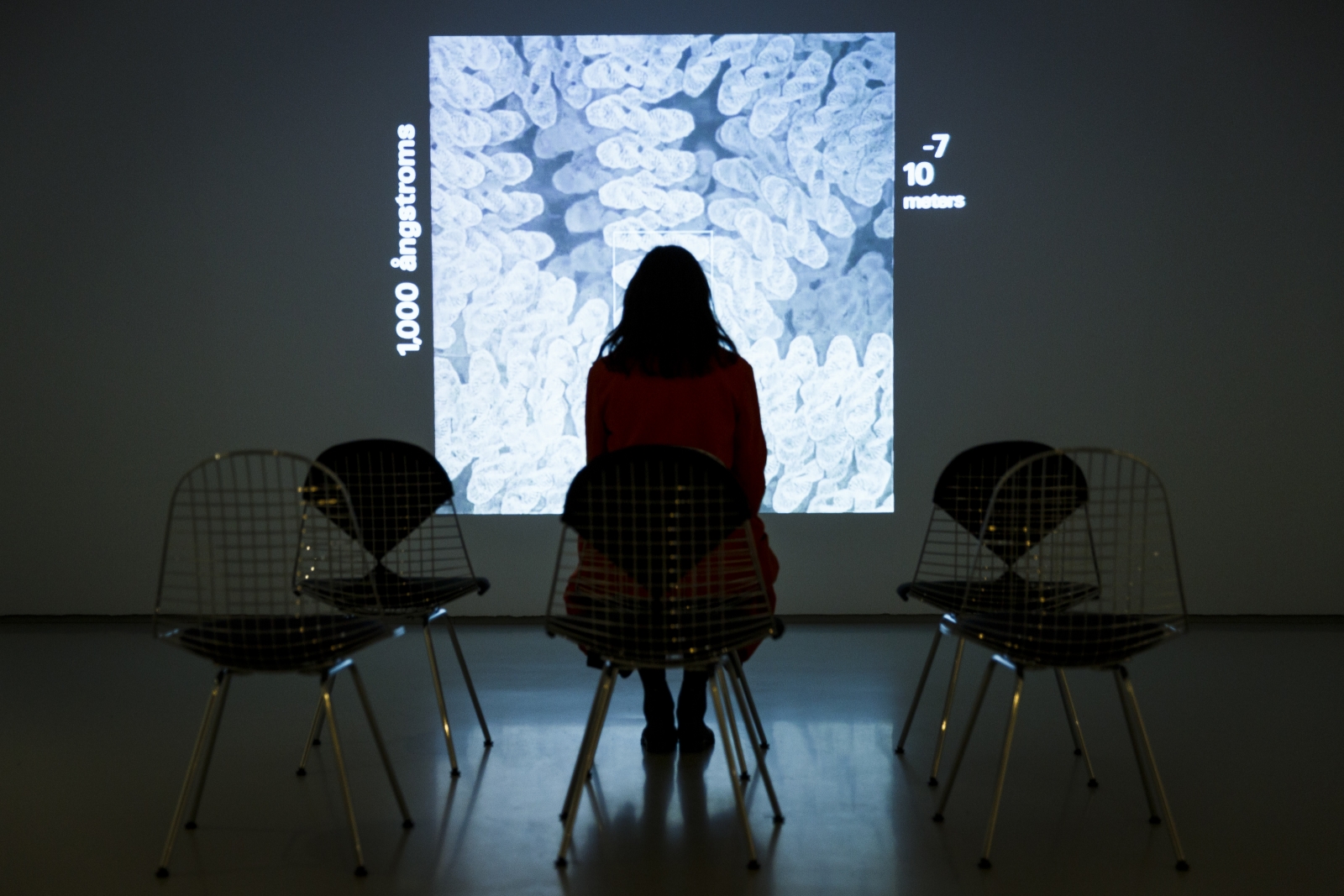 The groundbreaking Powers of Ten film is screened in a darkened alcove on the exhibition’s upper level. 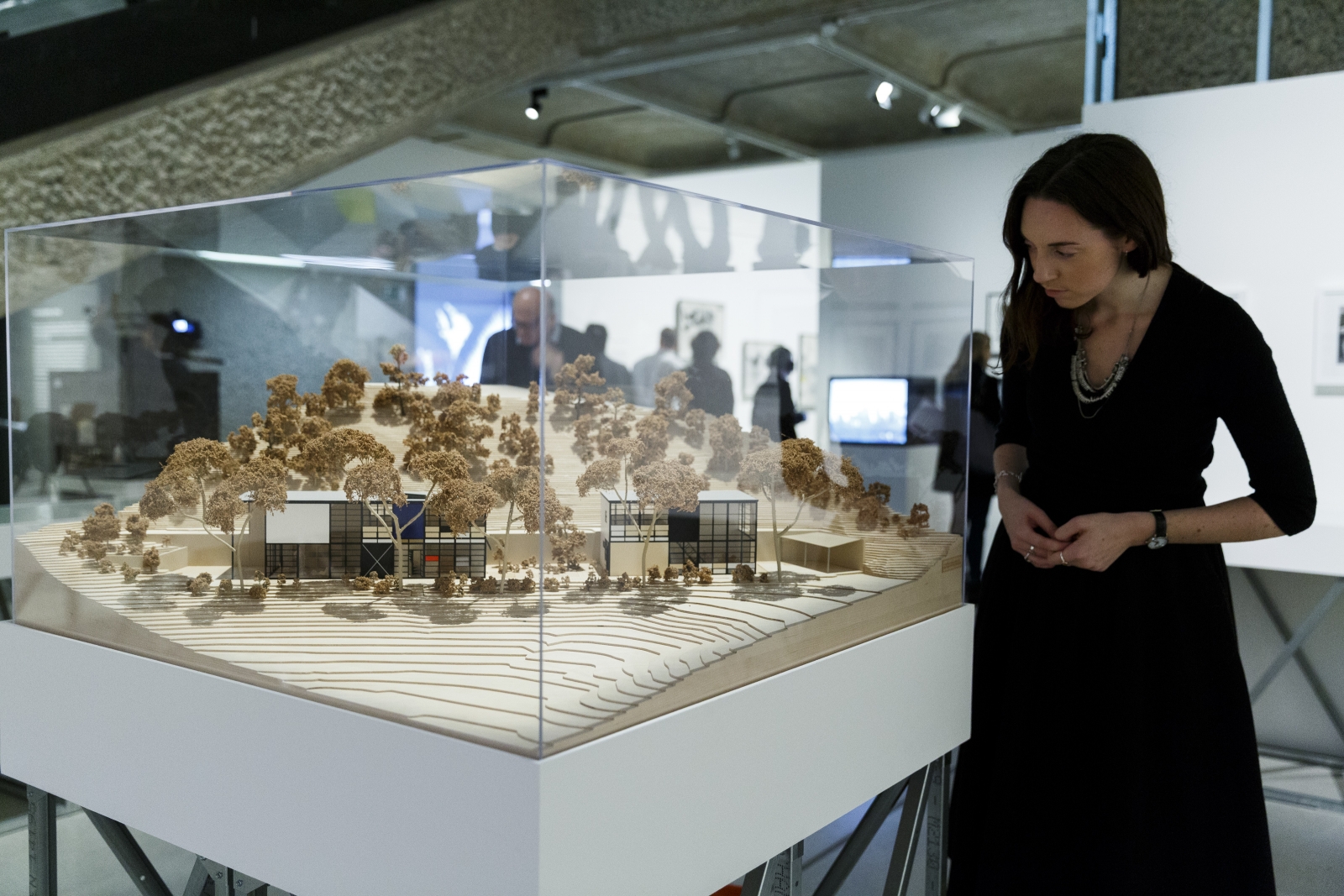 A model of Case Study House #8, which was built in 1949 using off-the-shelf materials. 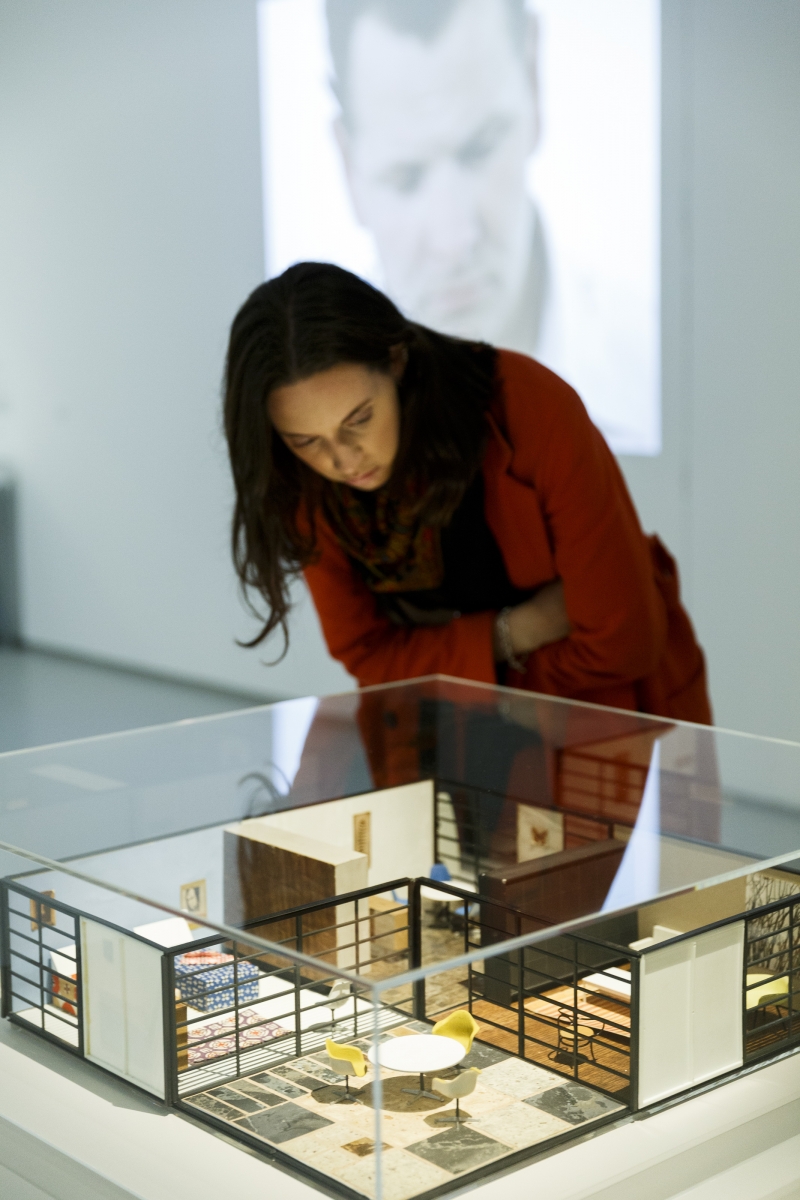 A model of the Revell Toy House

The World of Charles and Ray Eames runs through February 14, 2016.