How Strip Malls Reflect the Diversity of Los Angeles’s Neighborhoods

A new book traces the development of this typology, whose ubiquity is unique to the West Coast metropolis. The cityscape of Los Angeles is cinematic in its allure. For decades, its character has been defined by an image of easy living and sparkling street views. But the city is designed as much for leisure as it is for logistical practicality. When gas stations in Los Angeles started to disappear in the 1970s (a result of America’s oil crisis), developers began buying the cheap corner lots that once housed them, converting them into different, yet similarly functional roadside structures: strip malls. The stuccoed centers, united by small parking lots and the promise of convenience, became ubiquitous.

Use All Five, a Los Angeles–based design and technology studio, recently self-published Sunset Market Plaza: Meditations on Strip Malls in Los Angeles, a tribute to the city’s iconic, easy access architecture. A collection of essays, interviews, and photographs, Sunset Market Plaza explores the unique presence of strip malls in Los Angeles, and their impact on the city’s physical and cultural landscape. “There has been a long, slow, winding history in Los Angeles to bring us to a moment where, now, strip malls have a kind of cultural cache—they are places that are loved and known as spots for good food and interesting businesses,” says Jonathan Crisman, an urban planning professor at the University of Arizona who contributed to the book. “In the past, they were generally despised, like they still are in a lot of other cities, as ugly or seen through a racist lens that disapproved of their connection with immigrants or people of color.” Despite that negative reputation, strip mall developments quickly became financially viable structures, for developers and business owners alike.

The generic architectural form of these convenience centers allowed for the format to be replicated by the thousands–and quickly, too. During their heyday in the 1980s, land in Los Angeles county was inexpensive and building costs were low, which further encouraged rapid strip mall growth. “[This] generic space is easily adaptable and modifiable, so that the countless entrepreneurs who occupied these spaces could be wildly creative, inventing new businesses with a relatively low barrier to entry. And you get several very different uses and even cultures and languages occupying these little spaces right next to each other, creating these amazing little mini-publics.” And for immigrant entrepreneurs in particular, low-rent strip malls provided an accessible route toward the summit that is the “American Dream.” Securing space in one of these convenience centers didn’t require generational wealth or access to credit—plus, revenue from foot traffic was practically guaranteed. 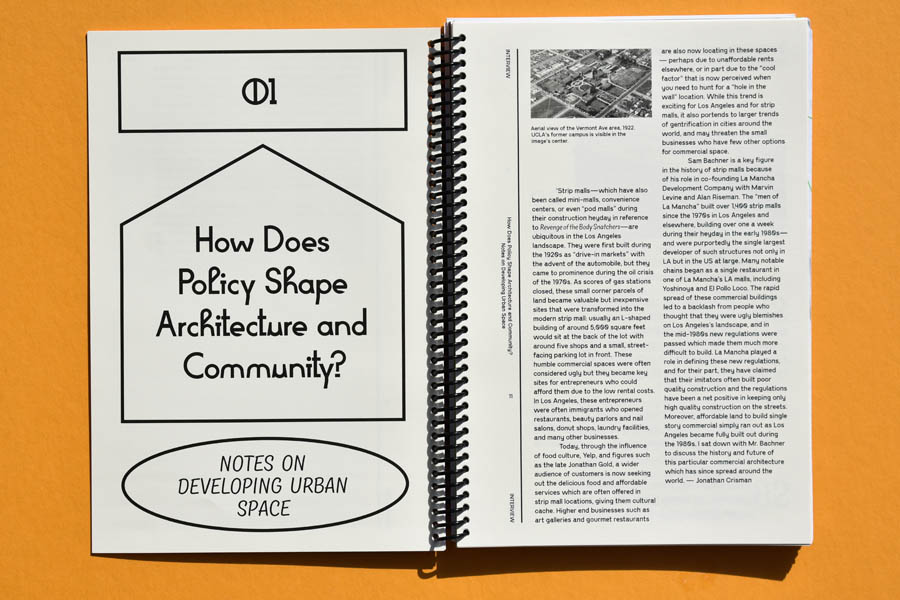 Sunset Market Plaza also offers a directory of Los Angeles’ most eclectic (and recognizable) strip malls. According to Shaina Goel, who co-edited the book, the featured strip malls were selected for various reasons: Some contain food establishments that have developed a cult following (thanks to the late Los Angeles food critic Jonathan Gold who championed them), while others were included “for their quirky combination of stores that seemed to epitomize the heterogeneity of mini-malls,” she says. The diversity of these establishments is reflected in the cultural diversity of Los Angeles’ many enclaves; in this sense, these inclusive pieces of architecture function as a de facto California census. In any given strip mall—whether in Los Feliz, Culver City, or South Central—you might find a Mexican restaurant flanked by a Korean-owned nail salon on one side and an Armenian alterations shop on the other.

Use All Five’s vibrant art book also, as it must, considers the effects of gentrification on the ubiquity of strip malls. As urban real estate becomes more expensive—and more vertical—broad roadside strip malls are being eschewed in favor of less accessible high rises. “Their development has really halted in Los Angeles,” says Goel. But at least for now, strip malls continue to anchor Los Angeles’ wide intersections, familiar destinations that now exist as communities unto themselves.