Mayor Steve Adler on The Challenge of Keeping Austin, Austin

An interview with mayor Steve Adler on the challenges facing this fast-growing, “it” city.

The city of Austin—home to a thriving culinary scene, a burgeoning graphic and user experience design community, and some of the country’s most popular festivals, including SXSW and Austin City Limits—has become synonymous with cool. But it’s also experiencing a host of growing pains as it navigates the transition from large town to “it” city: ever-worsening traffic, a massive construction boom, a growing housing affordability crisis, and the looming threat that the city’s music and performance venues will soon be priced out.

On the eve of this year’s SXSW Interactive I caught up with Austin Mayor Steve Adler, who was preparing to host 20 mayors from around the country for a new Mayoral conference track on topics related to civic technology, mobility, and equity. We spoke about the challenge of keeping Austin an affordable and nurturing place for musicians, artists and DIY creatives—in other words, of keeping Austin, Austin.

Rebecca Greenwald: You came into office a little over a year ago, but Austin’s challenges related to housing, gentrification, mobility, etc have been well underway for much longer than that. How do you try to mitigate some of those existing changes and attempt to set a new direction?

Steve Adler: In short—carefully and with a need to work quickly. Austin is a magical city, and it’s been that way since I got here in ’78. There’s something that is wonderful about the creativity that exists here: it’s an entrepreneurial place, it’s a city where it’s ok to fail, and a lot of cities aren’t that way.

We’re growing faster than any other metropolitan area in the country, and we have been for the last five years—we’re growing 30 percent faster than number two. And the challenges are, with all the growth that we’re having, we’re going to stop being the city that we imagine that we are, that we remember being. We have to grow to be the city that we still recognize. So those challenges are not optional challenges for us to deal with, they’re the challenges for us to deal with.

I think that that is going to require us to be creative and innovative. There’s not a city in the world that has figured out how to get in front of its gentrification, how to grow and preserve people and musicians and artists and creative people. We are running the risk of losing who we are if we lose them—we won’t be the Live Music Capital of the World if we lose our musicians and our music venues.

So your question was, how do you go about solving those things? In as many different ways as you can think of, and at the risk of trying things that may not work, but then you try something else. We’re trying to do things that the city hasn’t done before.

RG: You recently introduced the Austin Music and Creative Ecosystem Omnibus Resolution to address some of the urban issues that are forcing many artists, musicians and creatives out of Austin. Why is this initiative necessary and what are some of the specific items and recommendations in it that you’re most excited about?

SA: It’s necessary because we are losing our creatives in this city because they can’t afford to live here, and, as a corollary of that, we’re not providing opportunities sufficient to keep those folks here. Austin is Austin in large part because those communities are here, and if we lose those communities we won’t be the Austin that we know and that we want to be. So that’s the why.

Some of the items addressed in the resolution talk about creating hubs and gatherings of housing stock that would be affordable, so as to provide a counter market opportunity for people to live here. We also look at the city’s regulatory structure and permitting and how it operates in the music department, for example, so that it could not only provide less roadblocks to the development and presentation of creative works but also maybe actually enhance them.

We’re losing spaces for people to perform and for people to present in the same way that we’re losing affordable housing, and for the same reason. We’ll be losing over 40,000 affordable housing units in Austin over the next decade—they all will be converted into Class A or B apartments for rent or they’ll be torn down and a condo will be built, so these will all be lost. We’re going to lose a part of our population the size of Amarillo over the next ten years when we lose that housing stock.

The same kind of tools we use to be able to preserve affordable housing, we need to start applying to music, artist, and performance venues. 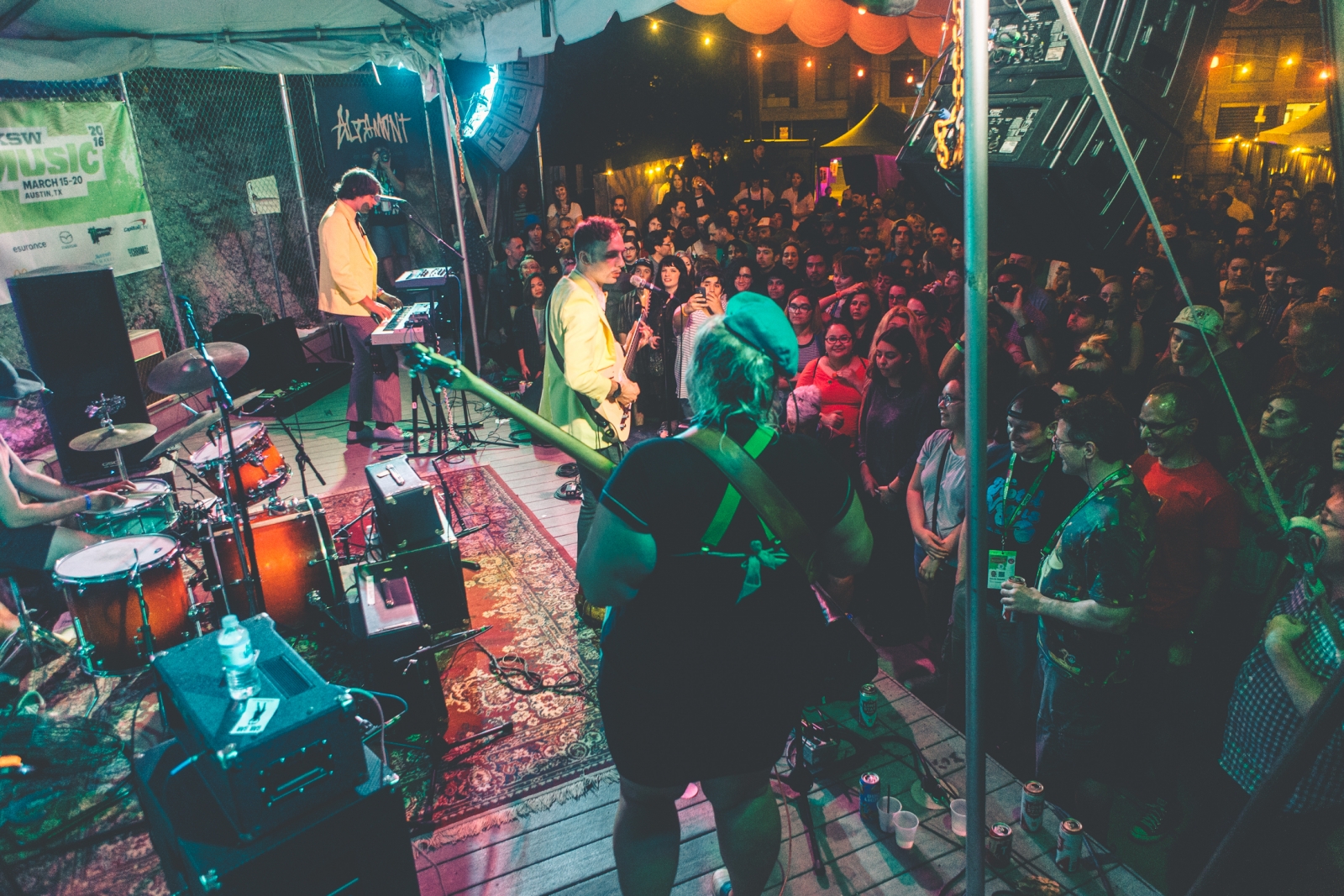 The new location of Cheer Up Charlies, a popular Austin bar and music venue along the city’s Red River Cultural District. The venue was forced to move from it’s former East Austin location due to new development.

RG: Another huge undertaking happening in Austin right now is the Code Next project to entirely rewrite Austin’s code and zoning system. How do you think this will encourage better urban development in the city?

SA: This initiative is not only necessary but critical. And I hope that by January of this coming year that we actually have a draft document that people are reading and discussing.

Austin’s building and development code was written 30 years ago. It’s been amended almost 200 times since then. It is a document that is cumbersome and was designed to build a city that is very different from the kinds of cities that we imagine today. We want a walkable city, we want complete streets, we want people to be able to not have to get into their cars. We want people to be able to have near them the services and facilities they need. It has to feel good and be a fun place. It has to be a place that works for families.

It’s different from the kind of cities we designed 30 years ago, when you wanted to be able to get into your car and get back and forth from Downtown as quickly as you can and back out to your suburban home. That’s not the kind of cities we want to build now, so our code needs to change along with that.

We need to recognize that in a city that has 2 million people in the metropolitan area today, 3 million people predicted by 2030, 4 million people within 10 years of that, we’re going to have to be building more densely than we’re building now. But we can’t do that density in the middle of neighborhoods because that too is disruptive and will [make us] lose part of our spirit and our soul. So we have to, in today’s world, come to the social compacts that are necessary for this city to live with itself and with each other, but still meet the needs of a changing world and changing perceptions of what makes for great cities.

RG: How would you characterize the impact SXSW, and tourism in general, has had on the city. How do you keep the city welcoming to tourists without catering purely to their needs?

SA: I think that SXSW is a significant part of the brand of the City of Austin. It represents innovation and cutting-edge technologies. It is a gathering and melting pot of ideas. It’s about music and innovation and art, so it feels a lot like Austin. It’s also the way that a lot of people around the world know of and come to Austin.

Tourism brings in people from all over the world, and from an economic standpoint it’s good for us because it’s people who bring in money and then leave, but they leave their money here. But we can’t cater to them. We can’t lose ourselves in that, and that, with so many other things, is a question of finding the right balance.

RG: What do you hope Austin will look like 5 years from now, and what is your office doing to make sure Austin doesn’t become the next San Francisco, development-wise?

SA: The issue with San Francisco, a fast-growing city that has so many things going for it, is the median home price in San Francisco was over a million dollars. Ouch. If we look at other peer cities—Boston, Seattle—you see that cities have not successfully come up yet with the formula to be able to get off that path, yet their median home prices are higher than ours. Austin’s median home value is approximately $260,000, home price just over $300,000. I think we’re still in a place where we can do something different if we are creative enough and innovative enough to come up with new things to try. And I think that’s what we need to do—I think we need to be hitting affordability and homeownership in ways that other cities haven’t. It’s going to require us to preserve housing stock at a grander scale than other cities by coming up with new, different kinds of market-driven solutions.

In the future I want this city to feel the way that it feels now. I hope it still feels creative and weird and innovative and entrepreneurial. I hope it still has real close ties to its environment and worships at Barton Springs. I hope the university and UT and its relationship with the city continues to be tight and close. But I also hope that there’s a feeling of equity and access that we’re able to bring about in this city that doesn’t exist today. I want it to feel more international than it does, or that we’re moving in that direction. And I want its streetscapes to be more inviting and complete and more widely distributed than they are now. And I think we can get there.