Measuring Social Design: The Challenges of Bringing Data Into Design

“Design+Health” showed how data will (and should) inform design. But it also provoked questions about its potential downsides.

In the last decade, social design has emerged as an established discipline in its own right. But although many now recognize the benefits of using a more sustainable design process, few have figured out accurate ways to quantify, or measure, these benefits. On this premise, the MFA Design for Social Innovation at the School of Visual Arts of New York organized “Design+Health,” its first day-long symposium dedicated to methods for measuring social design’s impact.

The symposium brought to the stage a variety of speakers, including architects, product designers, policy makers, researchers, and data scientists, who presented interesting projects and led stimulating, important discussions around best practices. Speakers explained that, although it’s challenging introducing metrics into the design process, measurement techniques can not only prove the benefits of social design but improve the design process overall.  However, by wholeheartedly embracing the positive potential of measurement, speakers neglected to discuss two considerable issues—the delicate and ethical nature of data gathering and the need to vigilantly monitor corporation’s involvement in social design.

“To measure is not easy” began Lori Melichar Gadkari, a labor economist at the Robert Wood Johnson Foundation, who opened the discussion and pointed out how the design community still has to prototype, share failures, and “learn what works and what doesn’t.” Social design, which only recently entered academia, is only about 10 years old after all. Scientifically measuring the effects of social design is a relatively new concern. Moreover, as Gadkari noted, measurement of impact is often just an afterthought, a process that starts at the end of the design project when, in fact, it should be integral from the beginning.

Heather Fleming, CEO of Catapult Design, similarly argued that social designers get involved too late in the design process, which makes the whole approach to long-term measurement more complicated. Her firm has built a name for itself designing services for socially-driven clients, recently worked on few projects to bring water to the Navajo Nation and help the Navajo people to set up more stable businesses. Fleming pointed out that designers should be trained to think beyond initial results and consider long term effects and how to measure them. “We never had a class about consequences in college.”

Michael Murphy, co-founder of MASS Design Group, an award-winning Boston firm, explained how every building has an educational, environmental, economic, and emotional impact that can and should be measured. After the opening of their celebrated hospital in Rwanda in 2011, the firm focused using statistics and surveys to show how the hospital was improving patients’, local families’, and doctors’ lives. 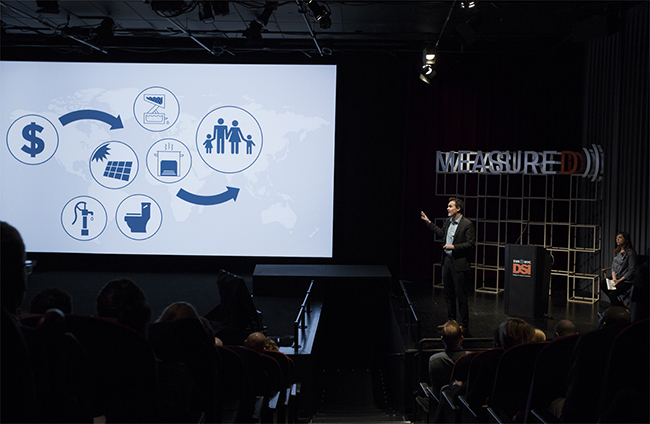 Evan Thomas from Portland State University at the Measured symposium

Evan Thomas from the Portland State University and Zoé Bezpalko from the Autodesk Foundation presented an interesting project that revealed how surveys and interviews are often not accurate enough to understand how people use design. They distributed cook stove and water filters to a population in Africa and then installed sensors on the devices. They found people were often not using them, or using them in the wrong way, and were able to redesign the filters to better serve them.

The feeling is that, while still messy and experimental for now, measuring will become an integral part of architectural and design projects. During the presentations, many stressed the fact that implementing measuring tools can also be an effective way to identify the right problems. “Many of us don’t understand what the problems are,” said Sundaa Bridgett-Jones from the Rockefeller Foundation, which developed a tool for cities to understand their level of resilience and improve it.

However, while the summit recognized the importance of measurement, it did little to explore the potential downsides—namely the fact that designers, corporations, and foundations could gain access to massive amounts of data, without any ethical/legal guidelines, all in the name of social design. For example, designers and data scientists brought up examples of how big data and online behavior can be used to explain people’s emotions and reactions to design inputs.  Marc Brackett, director of the Yale Center for Emotional Intelligence presented a recent project, conducted in collaboration with Facebook, to understand what students feel during school hours in order to improve their educational experience. Are designers equipped to safely and securely handle that, potentially, highly personal information?

IBM’s distinguished designer Doug Powell talked about Watson Wealth and the World Community Grid projects, which both aim to improve medical research and healthcare provider-patient relationships by relying on massive amount of IBM users’ data. At the end of the day, who owns the data? And how can we ensure that it will be ethically managed?

Moreover, by bringing multiple stakeholders to the table, a number of private corporations and foundations who partner with projects in third world countries were given voice, but rarely challenged. By becoming involved with social design projects, companies like Facebook, IBM,  Autodesk Foundation, Rockefeller Foundation, Gates Foundation are given access to personal information of populations that are particularly vulnerable. These companies will train these people in need and provide services, but, we must also recognize, they also purposefully set themselves up to access new markets.

The summit clearly showed how measurements, indicators, and data gathering will inform the design of the future. These are crucial components for understanding the real effects of design on people’s lives. But some questions must be considered now that we are at the beginning of this new approach to design. Who should be in charge of data gathering? The foundations and companies involved in social projects across the world should be utterly open and transparent about their goals. In other words, as the symposium itself underlined, we must truly design by taking into account the long term impact of that design on people’s lives—and that includes the process by which the design was produced and measured.