When my co-author Jane King Hession and I considered candidates to pen the foreword of our book, Frank Lloyd Wright in New York – The Plaza Years, 1954-1959, Wallace topped the list. We also hoped to interview him for our chapter on Wright and the media. We made the pitch and waited. Interminable weeks later, I was standing at a street corner listening to voicemail when I heard, “Debra Pickrel, this is Mike Wallace. I would love to—I mean, I’d be happy to—write your foreword. Did you know Wright’s wife? What a woman. What a man. Call me.” Ecstatic…I did.

On November 12, 2003. Jane and I arrived at CBS Television in New York and took seats in the austere waiting area. Rushing out of the elevator, Wallace whizzed right past us, returning some twenty minutes later. Waving a folder in our direction, he said: “Come on, children.” We followed him down an austere hall to the nerve center of the news floor—his office was smack in the middle of the action. A University of Michigan “Big Blue” M was posted on his door, which opened into a space filled to the brim with books (two-deep), Emmys and other awards, honorary degrees (we noticed Harvard), c.1970s furnishings, a desktop overflowing with papers, and a beige corded phone: all evidence of a formative career during which the work, not the surroundings, was the driving force. At 84, Wallace was still imposing and charismatic. His brown eyes sparkled with a spirit of zest and youth. He was intense, laser-focused, and in-the-moment…and we began to talk…

Jane King Hession: What was the mission of The Mike Wallace Interview show?

Mike Wallace: [It] was to get people other people were interested in, simple as that. All kinds of people, all walks of life, but people who were well known to the American public, who were interested in what these people would have to say. The reach and influence of the show was because it was new. It was different. People had never talked this candidly before.

JKH: And you had no competition, there were no other shows doing this?

MW: No. I used to say, you know, interview shows were pap—“and then I wrote, and then I sang, and, and then I”—you know what I mean. And all of a sudden, this dug into things that people ordinarily would not have heard in primetime.

Debra Pickrel: What did you think of Frank Lloyd Wright before meeting him?

MW: He was a stormy petrol. He was… an object of great admiration. His ideas were fresh. Fresh. Something he said in that first interview, I think…“What do you feel when you go into St. Patrick’s Cathedral?” What was it…pity, or something like that?

JKH: Was it your intent to interview the architect and social critic?

MW: Yes, both, because his architecture was social criticism as well.

JKH: Who requested the interview?

MW: I did…not him. And for all of the reasons that I’ve said.

JKH: Do you recall if he was willing to do it? And ready?

MW: Oh. Willing and happy to do it, I got the feeling.

JKH: Were they any ground rules…was he aware of questions ahead of time…any rehearsal?

MW: None. It became apparent to me, in impression and during the conversation right before and after…that he had watched the broadcast and that he had liked …I mean he wouldn’t have done it unless he liked what he had seen. He knew that he would be treated seriously. It sounds foolish in retrospect to say that [the show format] was new, but it was, it really [was] a path-breaking undertaking.

JKH: [Why did you choose the first] three topics: Christianity, the American Legion, and mercy killing?

MW: (Laughs) Well, for the very fact that I knew…it was going to get his heart started, so to speak.

DP: Did the two of you have a brief conversation [before starting the interview]?

MW: Oh, sure. He was having a good time and so was I. The business, the exchange about smoking–[his objection to my lit cigarette from our sponsor Phillip Morris]—I mean…he came to rassle, he came to play, he came because he knew what he was about to do. And, as I say, it became apparent to me all along that he had watched [the show] and admired it.

DP: [What was] his most surprising response?

MW: In as much as I was doing commercials, and…for the cigarette, his most surprising response in effect [was]: “Where did you pick up that filthy habit?” (Laughs) 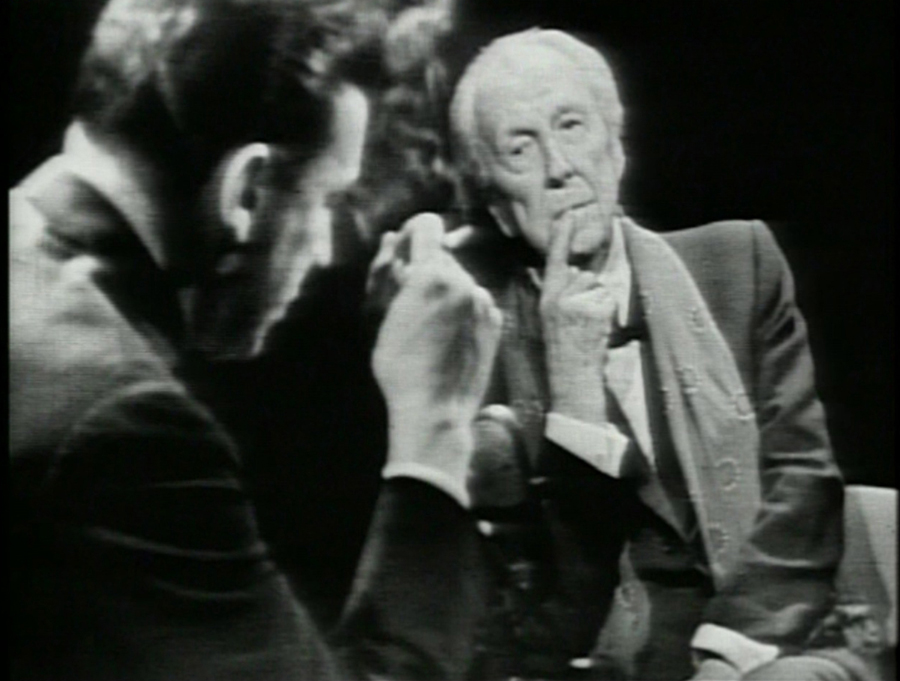 DP: Was it the practice to schedule second interviews?

MW: Nooo. But it…had gone so well, and we knew so much about him that we hadn’t asked…I said, “Hey, what about—sit right there.” We followed it…right after that.

JKH: What was the power of the young medium of television at the time?

MW: (Taps his pencil.) It was a…well, it was a revolution. You didn’t know what you couldn’t do, so you did it. (Laughs) And the audience would tell you what you couldn’t do. And because there was so much curiosity about this “picture,” and these people whom they’d never seen before…and the close-ups…and the lighting. People paid attention.

JKH: Did Wright grasp the power of television, did he manipulate this in the [interviews]?

MW: I’m sure that he grasped the power—he wouldn’t have done it if he wasn’t about to talk into an empty barrel—but no, he was not manipulating. And the public’s reaction was…very good.

DP: Did the ratings go up after the first interview?

MW: I don’t remember. You know this was on on Saturday nights…hardly time for an interview show.

JKH: But again, if you go back to television at that time, I mean it was an event, I suppose, like going to the theater.

MW: I don’t remember that I did. I didn’t have any series of ongoing encounters with him. I would see him from time to time, and he obviously…had enjoyed [the interviews], so he was cordial and so forth, and a lot of people obviously talked to him about it. He hated New York because, you know, what he wanted to do was to build that damn mile high tower (laughs)…and everything else was going to be a garden or a lawn or something of that sort. He liked the media, he liked the attention. He was…a narcissist of sorts.

DP: [Do you] think that the Guggenheim is now a New York icon? Controversial?

MW: Yes, and yes, [but] it’s not about New York. It’s like saying the whatchamacallit at Bilbao is about Bilbao, or is it… No. I just think he was drawn to the city, he hated parts of it, but was attracted to it nonetheless.

DP: [Do you consider Wright] to be a genius?

DP: [There is a quote of Wright’s we’d like your opinion on.]: “I consider myself a success only insofar as my life is useful, revealing, and rewarding to my kind. Who knows who is a success until long after the circumstances? Success is measured not in ordinary terms, but what will transpire fifty years later. So fifty years from now, you will know whether or not I am a successful person.” [Do you consider him to be?]

MW: Yes. Certainly among the most fascinating—for me. And that’s all I really had to please back then. If I had a good time, if I was fascinated. Now, this was long before [reporters] began to talk to people overseas, and so forth. And before 60 Minutes.

DP: How did you feel being a young [39] television reporter interviewing the iconic Mr. Wright [90]? You interviewed a number of personalities like that.

MW: Yeah. The same way I felt when I interviewed [virtuoso pianist] Vladimir Horowitz who had been in exile so to speak, self-imposed, for twelve years…He hadn’t done interviews of this nature, ever…He wanted to do it on the stage of Orchestra Hall in Chicago, the day before the concert…So at four o’clock Saturday afternoon he came out in his morning coat and his little bow tie and so forth. I, I mean, I was awed. Vladimir Horowitz. And I said, “Maestro.” “Mike Wallace! I watch you every Sunday night!” (Laughs) Well, come on….wonderful.

DP: You said [Wright] was very, very smart, quite sure of himself, very arrogant—and he brooked no criticism whatsoever. Do you still feel that way?

DP: You also spoke about the Guggenheim, and your personal opinion [of it]. You said: “Everybody apparently admires it extravagantly and I find it not very, ah, I don’t like to go there. I don’t think you can properly see paintings there. I don’t like the going up and down and around and around, it makes me rather dizzy.”

MW: Exactly right. I mean, it’s, you know, that thing…

DP: What’s your driving force? Where does all this come from?

DP: Were you born with it?

MW: Probably, yeah. I didn’t know what I was going to do. I didn’t know what I wanted to do. It never occurred to me that…what I really wanted to be (taps his pencil) was a radio announcer. I used to be…in Grand Rapids, which was my first job shortly after I got out of the University of Michigan back in 1939…for twenty bucks a week. I just, I fell in love with radio. I was always a little sensitive about my skin, so I figured what the hell. And television had not been invented…

MW: That’s absolutely right. Those of us who got in then…As I said, you didn’t know what you couldn’t do.

DP: I love that. I’d like to think that about life in general. Thank you so much, Mr. Wallace.

Debra Pickrel is founder and principal of Pickrel Communications, Inc. (New York, NY). A former VP of education on the Frank Lloyd Wright Building Conservancy board of directors, she also edited its quarterly BULLETIN. Her previous Wright posts on this site include Wright in New York: Looking Back on Frank Lloyd Wright’s Final Years, Remembering Edgar T. and Remembering Frank Lloyd Wright’s Demolished Car Showroom. She will contribute additional posts this summer during the magazine’s celebration of the architect’s 150th birthday.

The book’s co-author, Jane King Hession, is a partner in Modern House Productions (Edina, MN) and an architectural writer and historian. A former president of the Frank Lloyd Wright Building Conservancy, she is the author of several books on Wright and other architects, and co-producer of the documentary Wright on the Park: Saving the City National Bank and Hotel.

Mike Wallace (1918-2012) was a correspondent emeritus for CBS Television. He began his career as a newsman in the 1940s, joining 60 Minutes when the program first aired in 1968. A graduate of the University of Michigan, Wallace was the recipient of twenty Emmy Awards, and was an inductee of the Television Academy Hall of Fame, among other accolades. His final book, Heat and Light: Advice for the Next Generation of Journalists, written with Beth Knobel, was published in 2010.