MIT on the Frontier: An Interview with Hashim Sarkis

We speak with MIT Dean Hashim Sarkis about the university’s truly remarkable presence at this year’s Venice Biennale.

At this year’s Venice Architecture Biennale, “Reporting from the Front,” MIT will have an unusually widespread presence. Ten full-time and visiting faculty, six alumni, and a handful of other MIT-affiliates (many invited by curator Alejandro Aravena himself) will contribute to over 15 installations, including “Rwanda Droneport,” a full-scale earthen masonry shell designed by Norman Foster, which will serve as a small airport for drones delivering supplies to inaccessible areas of Rwanda, and “Courtyard House Plug-In,” a prefabricated building system designed to be inserted into Beijing’s dilapidated courtyard houses. To discuss MIT’s significance on the architectural stage today, we spoke with the Dean of MIT’s School of Architecture and Planning, Hashim Sarkis, who, it was recently announced, will also serve on the Biennale jury.

Vanessa Quirk: Is it unusual that so many MIT-related projects are at the Biennale this year?

Dean Sarkis: Last [year], the American pavilion was co-curated by MIT. They were part of a larger consortium defining the pavilion around the American office overseas and curating an exhibition that catalogues how American architects have taken their work to the world.

This year, it’s basically the world reporting back. Aravena’s theme is about how the best practices may not need to be about this kind of Western-world emanating out to the rest. To the contrary, experimentation, good work is coming out of everywhere. And I think, as a result of that, our faculty has been engaged in it in a kind of unexpected way, by virtue of the amazing work they’re doing.

So, instead of everybody being curated in one pavilion, our faculty are appearing everywhere—by virtue of the fact that they are everywhere, working on different fronts and frontiers.

VQ: It’s kind of serendipitous, but also just an alignment of missions, I suppose.

DS: The faculty’s presence is by virtue of the theme, it overlapping with so much of what our faculty is doing. Therefore, them being selected, whether directly by the director of the Biennale, Aravena, or by national pavilions that saw their work, [it’s due to their relevance] to the larger thematic.

VQ: Could you comment on the theme: Reporting from the Front? It will, hopefully, generate a productive conversation–but is it also moving the architectural dialogue in a different direction, or moving it forward?

There’s, at one level in the Reporting from the Front theme, a way architecture says ‘I’m no longer sitting on the pedestal in the ivory tower, being the avant-garde, being the formal exercise which then trickles down to have its impact.’ But on the other hand, it says, ‘I’m still that, because that is the way by which architecture can really enamor, change the world, and give certain groups their dignity, their image, their visibility.’ In doing that, it is completely changing the debate in terms of what is architecture’s role in society.

VQ: Do you feel that this Biennale has the potential to break down those barriers, dissolve the highly-defined nature of architecture as, as you were saying, in its ivory tower?

DS: For the longest time, since the ‘80s, when we had the first Biennale—this is not to be taken for a criticism—the Biennale has always been about bringing together the “avant-garde establishment,” if there is such a thing, from key universities, from key clubs of investigation around the world, around the Western world, or the Global North, to define certain thematics and directions, anticipate certain debates, or ratify already existing types and give them structure, organization, convene the world around them. So the world used to come to Venice to see what this establishment is doing. Now, the world is coming to Venice to show the establishment what the world is doing.

VQ: It’s a great inversion. And what do you think MIT will contribute to the Biennale? Is it a way of thinking, a process, a focus on types of research?

DS: All of the above. All of the above, but also a forward-looking approach to architecture. We always have to think about architecture twenty years down the line, where it’s going to be. A much more aggressively international presence. We are everywhere in the world. We truly believe that architecture is both radical and plural. Radical in the sense that it needs to change in order to change the world, and plural in the sense that the source of change is from everywhere; it is attentive to possibilities and potentials everywhere. That is what is amazing and unique about MIT. 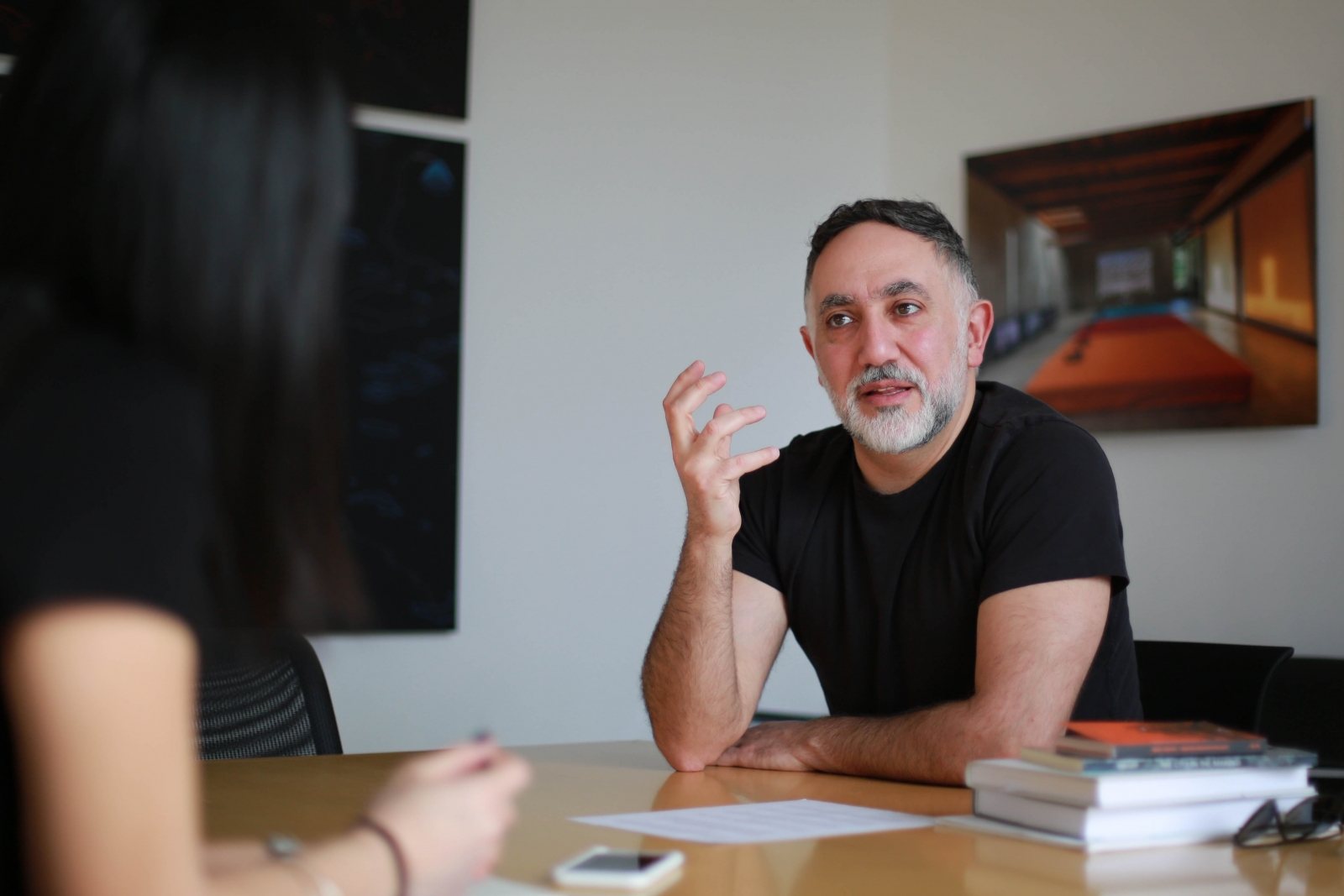 Hashim Sarkis, Dean of the MIT School of Architecture and Planning. Also a member of the 2016 Architecture Biennale Jury.

VQ: You arrived here about a year ago from Harvard. What are the main differences that you see?

DS: Harvard’s an excellent school in every aspect of the word. I think the differences between Harvard and MIT are so big, even though they are in close proximity, that comparison fails us when we talk about the two together.

MIT is a research institute. It is operating within the ethos of the scientific method, but the scientific method at MIT is twofold. On one level it is about elevating the scientific content, the technological instrumentality to save the world. But at another level it is translated into a way of thinking about the world, a point of view where every individual’s experience is an experiment. It’s a very democratic approach to understanding knowledge and accessing the world. The scientific method therefore enters into the thinking here—by being very much about deliberation, process of engagement, inclusion—in order to benefit and to be aware and attentive to the experiences of every individual in the world, rather than to dictate it from above. Science is not up here. Science is both up here and from below.

Especially in a world like architecture, where we are dealing both with the technology and the scientific advances on one end, but also dealing with the users, with the citizens, with the participants, we benefit from being at MIT because of those two levels of engagement. So, that’s what makes it so different as a school.

VQ: And I imagine there’s an unusual degree of interdisciplinary collaboration here.

DS: That’s key. We don’t even talk about it because we don’t see what the problem is. We say, ‘okay, we need to change the world—there’s a problem of earthquakes in Kyoto, kids are not able to go to school after an earthquake.’ So we bring educators, public space experts, policy experts in urban management, water management, etc. They sit together and they solve the problem. This attitude of solving problems makes it such that all fields of knowledge are accessible to you equally and opportunistically. So you don’t need to think about, ‘oh, this is a problem from architecture, or it is a problem from infrastructure engineering.’ And MIT thrives on what it calls complex societal problems. And what better complex societal problems are there today than cities and architecture and the environment. So, we’re ready. 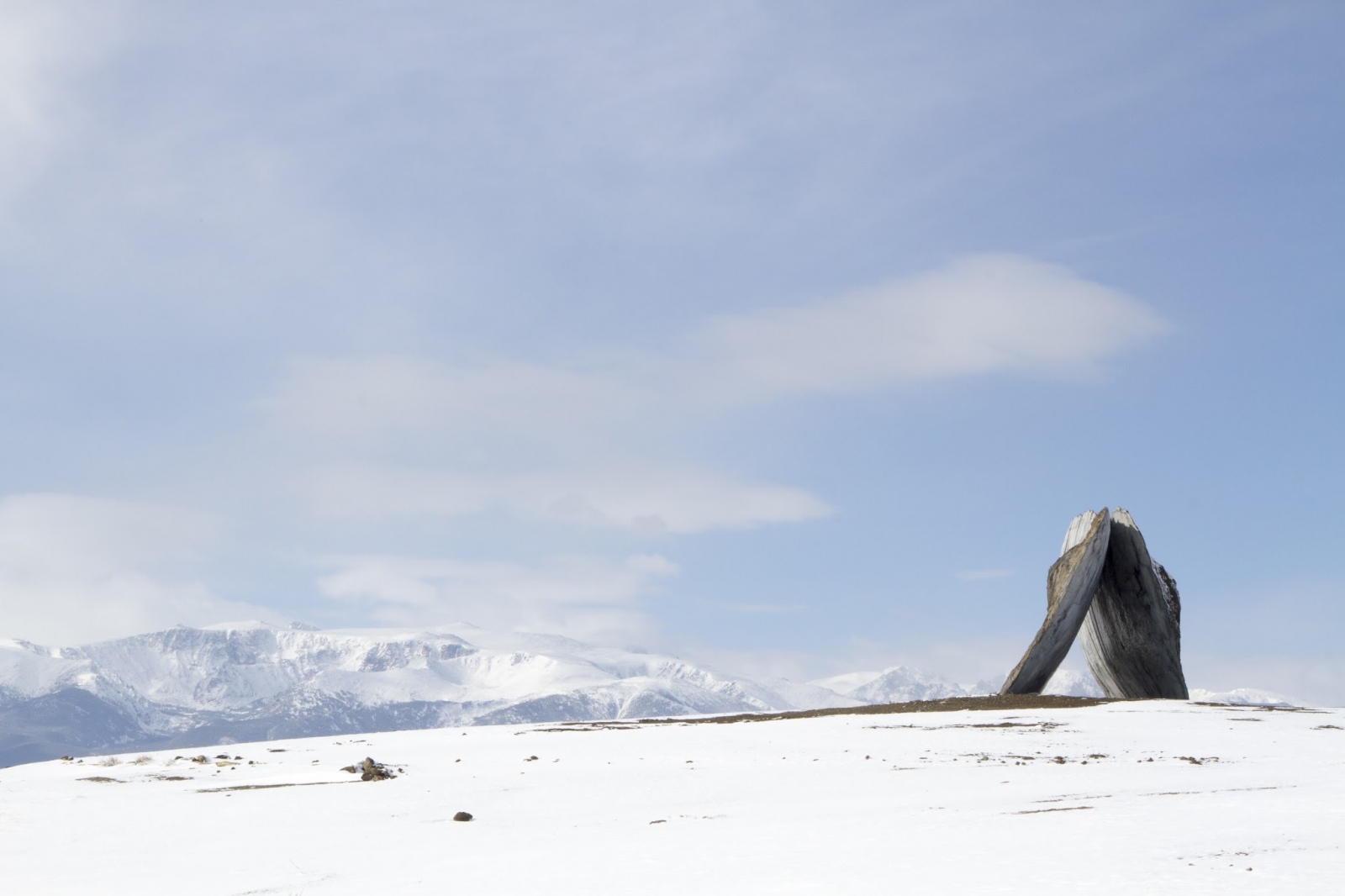 The co-founders of Ensamble Studio, Antón García-Abril, professor at MIT, and Débora Mesa, MIT research scientist, will present “Supraextructures Versus Structures of Landscape.” 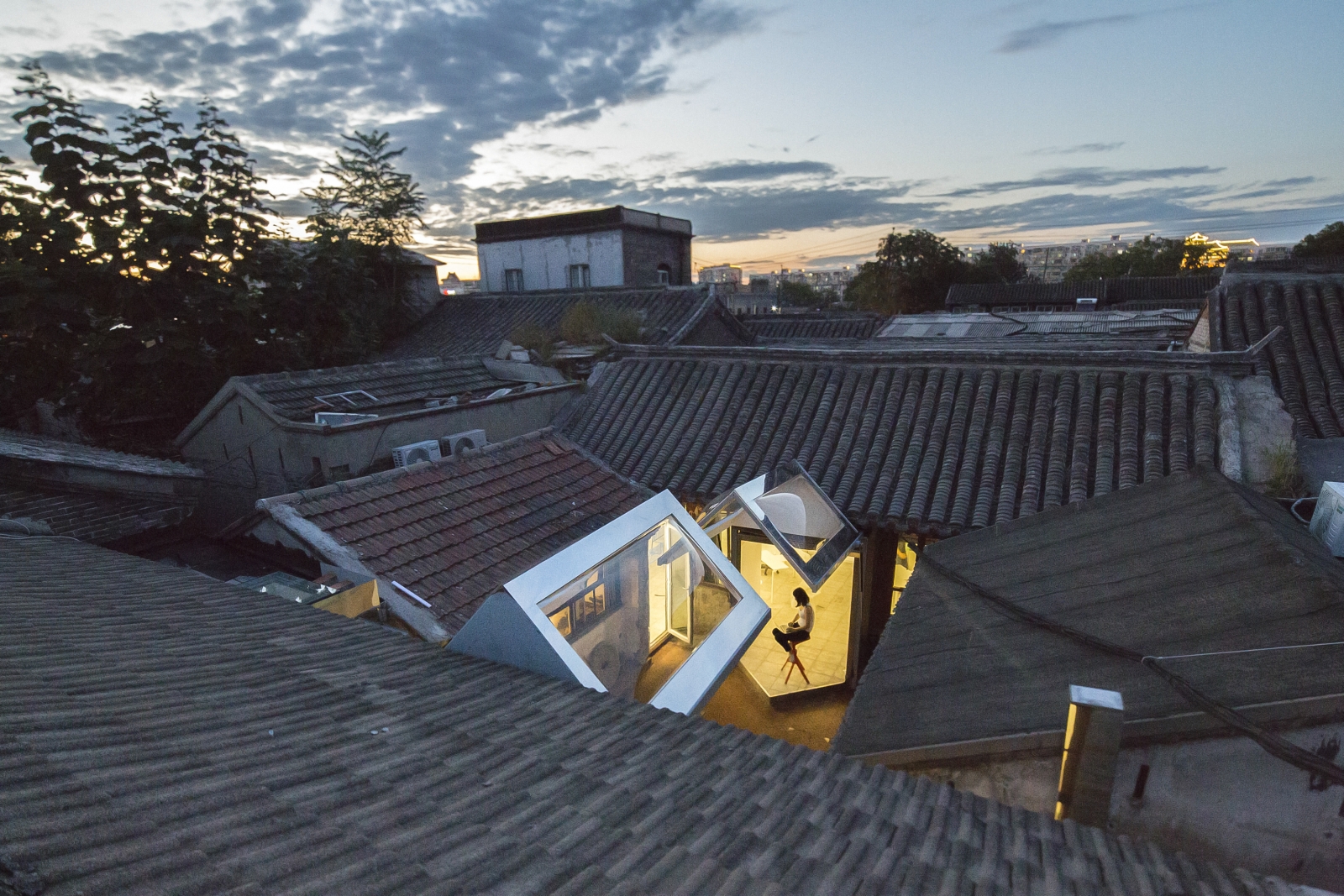 The Courtyard House Plugin, a prefabricated building system for inserting modern living conditions into dilapidated courtyard houses, designed by The People’s Architecture Office (including MIT alumnus James Shen). It will be exhibited at the China Pavilion. 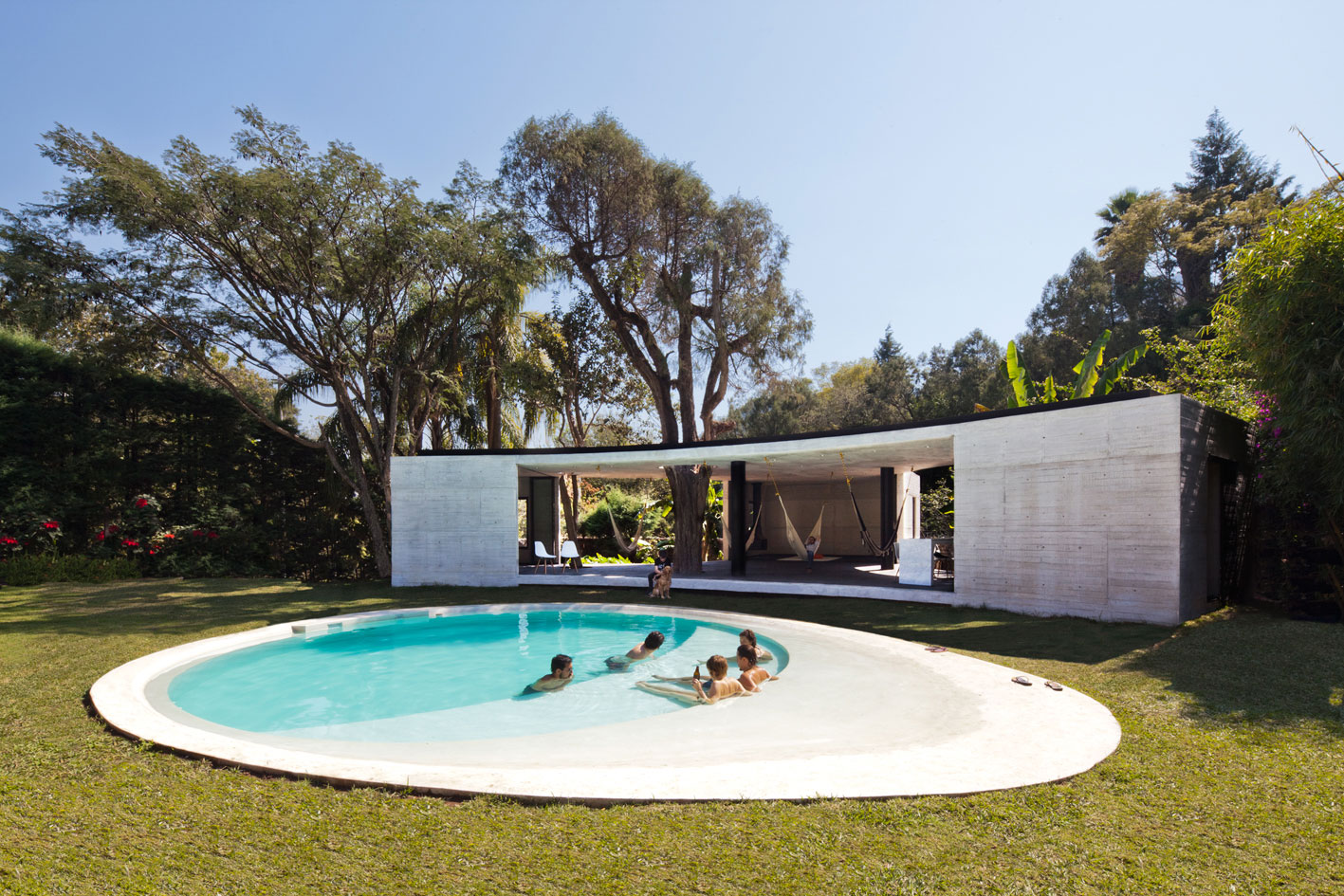 Clara Solá-Morales, visiting professor at MIT, will present “The Non-Built,” an installation exploring architecture as “the physical frame that enhances social interaction.”