Building political coalitions and informing the public are essential

On a chilly February afternoon I wandered around an unfamiliar part of campus until I found my destination – a small, but grand lecture hall (this is at an Ivy League university, after all). The event was the annual flagship lecture hosted by Yale’s Department of Sociology, and the speaker was Theda Skocpol, the Victor S. Thomas Professor of Government and Sociology at Harvard. The talk was seductively titled “What It Will Take to Mobilize Americans to Limit Carbon Emissions and Fight Global Warming.”

Skocpol has spent six months attempting to answer the question: Why has climate change legislation failed? Specifically, she looks at the downfall of cap and trade in juxtaposition to the legislative success of healthcare reform. Although cap and trade passed through the House of Representatives, the bill could not get enough votes in the Senate. In the aftermath, environmental activists blamed either the economic crisis or Obama’s lack of leadership (i.e. not addressing climate change in his addresses). Not entirely convinced, Skocpol looked deeper at the forces acting on Congress.

She found that the cap and trade movement invested heavily in bringing together moderate environmentalists and big businesses, while only marginally focusing on an effective media campaign to explain the concept of cap and trade. Over time, so many free carbon permits were given to polluting companies to garner support that environmentalists on the left disgustedly rescinded their support of cap and trade. Because cap and trade did not focus on wooing the American public, there was more room for conservative media to befuddle the climate change “debate,” and Skocpol found a strong correlation of public perception to conservative media stories on hoaxes in climate change science (see figure). 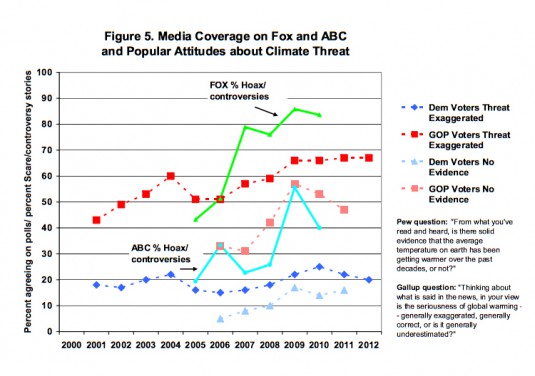 So what solutions does Skocpol provide? How do we identify what it will take to mobilize Americans? She identifies a few major players already active: policies encouraging sustainable energy solutions, college grassroots organizations such as 350.org, and regulation by the Environmental Protection Agency. But she also recognizes the need to build coalitions and legislation in Congress, estimating that the earliest opportunity for advocates to shine will be in 2017. Learning from the earlier cap and trade failure, Skocpol declares the need for a policy approach that can be communicated to Americans easily, and one that reaches out to the range of moderate Democrats to moderate Republicans.

As someone who has worked in the climate change movement for several years, I believed myself to be quite well informed on cap and trade. But after hearing Skocpol’s lecture I began to understand the extent of insider bargains that occurred, and the surprising effect of political media outlets. This reaffirms Skocpol’s argument for a better, more effective way to communicate the intricacies of cap and trade to the American public. I do wish the lecture were more focused on mobilizing Americans as her title suggests, and not simply a presentation of her research and conclusions. The solutions she does present, though significant, are macro in scale and specialized to policymakers, which admittedly may be her primary intended audience. However, I personally would have liked to hear more on why we as a nation of citizens, not a nation of policymakers, cannot seem to rally for climate change solutions.

Theda Skocpol’s full pdf report, “NAMING THE PROBLEM: What It Will Take to Counter Extremism and Engage Americans in the Fight against Global Warming” can be found here.