An ongoing exhibit at the Villa Le Lac asked contemporary architects to design an addition to the landmark house.

The preservation of iconic landmarks of the early Modernist movement—or any architectural period, for that matter—is just one half of the battle. Many of these sites must also contend with the matter of determining a building’s continued use and programming. At Le Corbusier’s La Petite Maison (known now as Villa Le Lac) in Corseaux, just outside Lausanne, Switzerland, its curator and conservationist Patrick Moser found an interesting way to tackle the issue.

The house, built in 1924, and the second home Le Corbusier designed for his parents, was an opportunity for the Swiss-French master to implement many of the ideas that would become essential to his revolutionary architectural vision. To mark the 50th anniversary of Le Corbusier’s passing, Moser invited several leading architects including Zaha Hadid, Bernard Tschumi, and Toyo Ito, among seven others, to submit designs for an imaginary addition to the house. “It’s an opportunity to look at things from some distance, through space and time,” says Moser, explaining how the idea for Homage to Le Corbusier came to be. “I thought an interesting question would be, ‘How would Le Corbusier’s peers today extend this villa?’ And since we are not really building anything, and staying in the realm of a creative exercise, it would be a very fitting homage to a man whose imagination was the source of his genius.”

The proposals are as varied as the group, with emphasis ranging from the radical to the highly conceptual. Tschumi’s contribution dwells on architecture’s performative role, proposing an eclectic expansion of the villa’s curatorial program while leaving the house essentially untouched, at least from the exterior. Inside, the light-filled domestic spaces are activated by “events” such as sensual pole dancing.

Daniel Libeskind’s turn, conversely, doesn’t shy away from meddling with the villa itself. He props up the house on Corbusian pilotis, clearing and opening the ground underneath. Doing so, Libeskind says, fulfills one of the architect’s dreams for modern architecture—an open ground plane—and in an ironic twist, he uses a Corbusian trope to outdo Le Corbusier himself. The project’s uncanny feeling is underscored by Libeskind’s drawings, which bear an eerie resemblance to Le Corbusier’s own sketches for the house. “Dreams in architecture are not only retrospective,” the Polish-American architect says, “but also prospective because they share in each other’s strange timelessness.”

While Libeskind jacks up the house skyward, French architect Rudy Ricciotti goes in exactly the opposite direction. He imagines an absurdist basement addition that would accommodate a comically large dining table. A red curtain conceals the connection to the house above, while a large glass wall opposite keeps the waters of Lake Geneva at bay. It’s a witty take on the Modernist idea of blurring interior-exterior boundaries, and the perfect setting for a Surrealist dinner party. 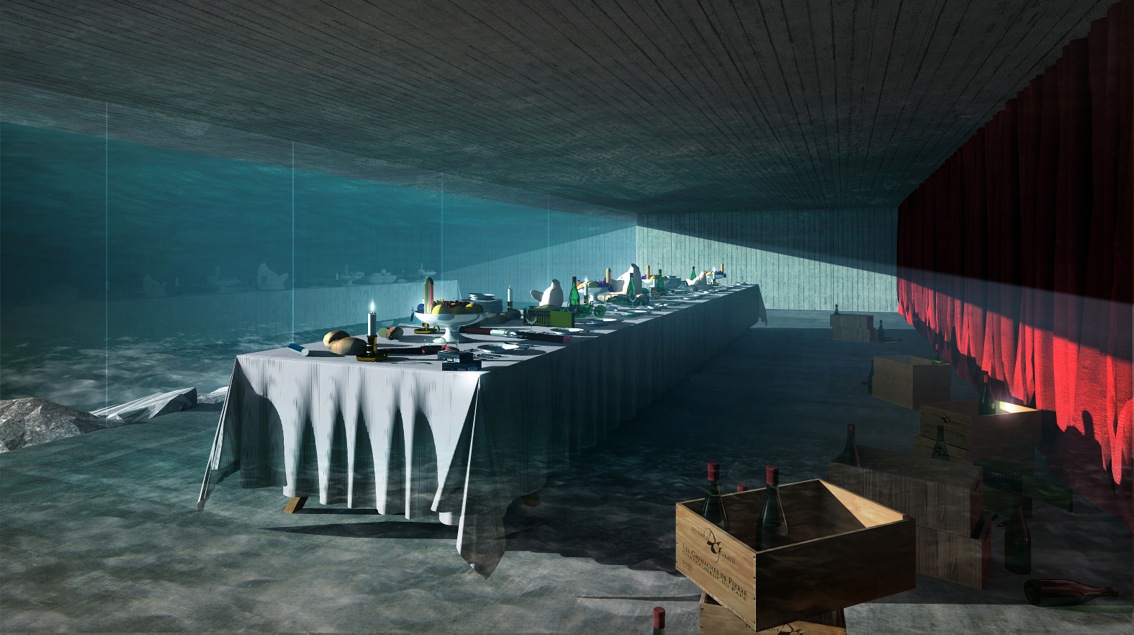 For her proposal, Zaha Hadid takes a cue from Le Corbusier’s canonical diagram of the Maison Dom-ino, which celebrated its centennial last year. She takes that most quintessential Corbusian element, the floating roof,  and radically reinterprets it, giving it shape in accordance to today’s materials and technological advances. Parametricism literally engulfing Modernism.

Zurich architects Annette Gigon and Mike Guyer contribute a film of the house. Looping over and over, the video installation considers the home’s temporal effects—a reference to the Modernist troika of space, time, and architecture. The footage documents the house at various points of the day, forever enabling architecture lovers all over the world to “visit” the villa. It poetically captures the feel of being in the house, being sometimes descriptive, sometimes narrative.

Perhaps the sole appropriate—thus, buildable—entry is Mario Botta’s simple boating dock, just in front of the house. The no-thrills structure actually plays perfectly into the motif of the house connecting with the landscape. It would also provide the perfect place from which to admire the house’s elegant geometry, creating an indelible vision of Modernism.

These different visions of the Villa le Lac join the extensive documentation of the building visible inside. Several of Le Corbusier’s drawings of the house are displayed alongside vintage photographs from the years 1920–1930, which show the property before the adjacent road was built in 1931. (The motorway forever changed the site’s once isolated setting.)

The wildly fanciful entries belie a more pragmatic need and Moser’s greatest ambition for the property—to increase the house’s operational budget. Doing so would enable the villa to open more days a week, and so, avoid overcrowding during visiting hours. The diminutive 689-square-foot house can fill up quickly, often at the expense of disrupting its intimate character. That goal could become a reality if UNESCO approves of an application to grant Le Corbusier’s buildings World Heritage status, Moser says. “Entering the UNESCO world heritage list would be an acknowledgement of the role of this seminal project in Le Corbusier’s oeuvre and its incalculable contribution to the Modern Movement.” 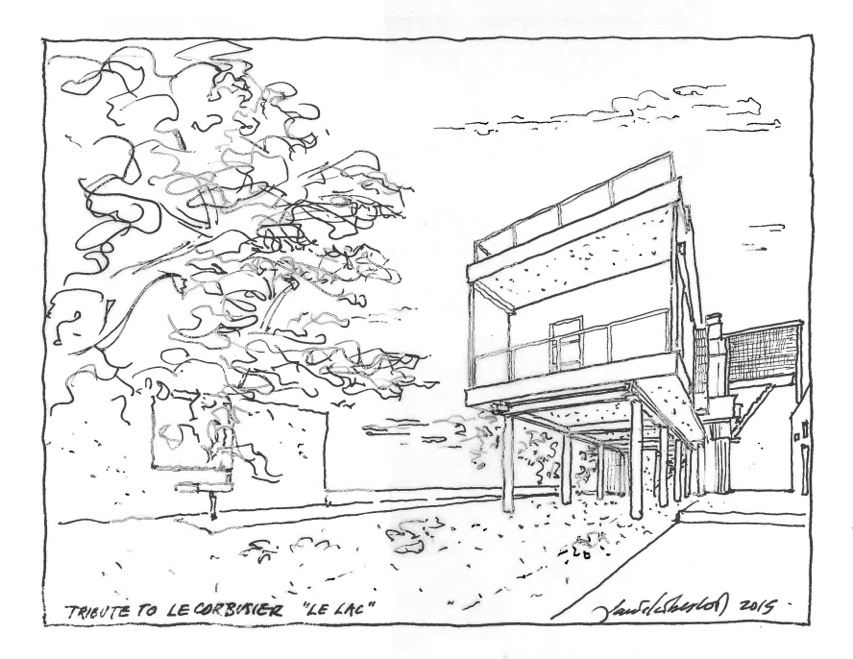 Daniel Libeskind proposes raising the house on a set of pilotis. 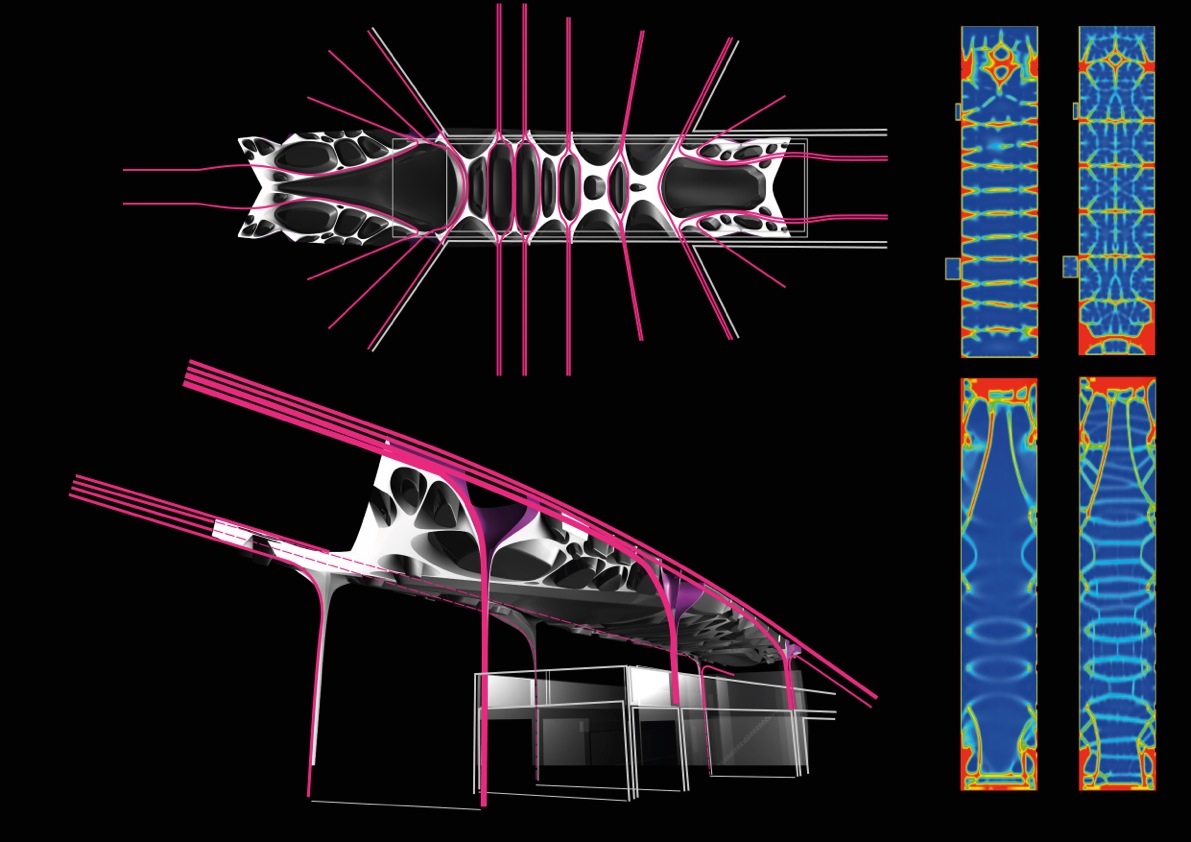 Zaha Hadid adds a parametric parasol roof to the house. 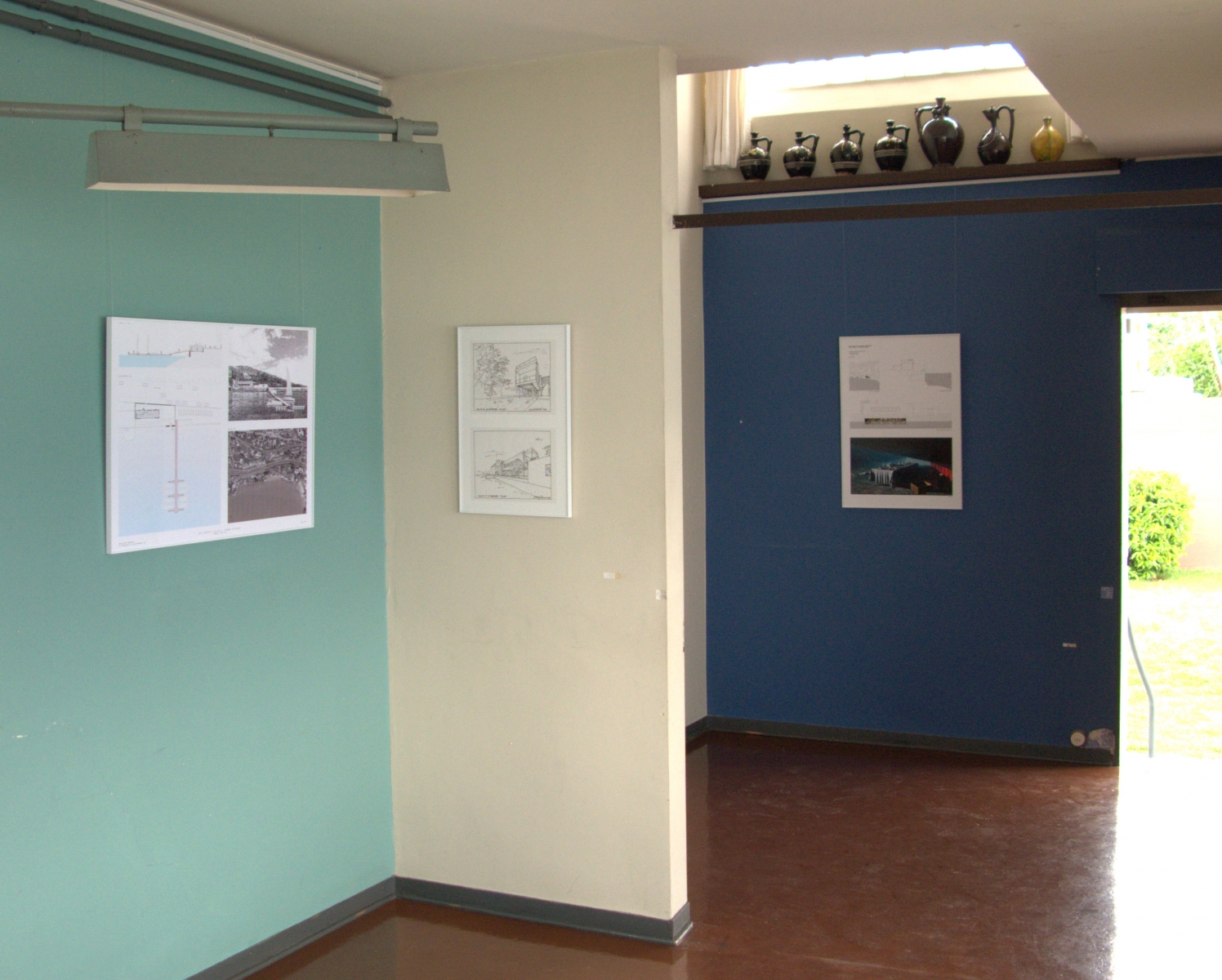 The architects’ proposals are displayed inside the villa. 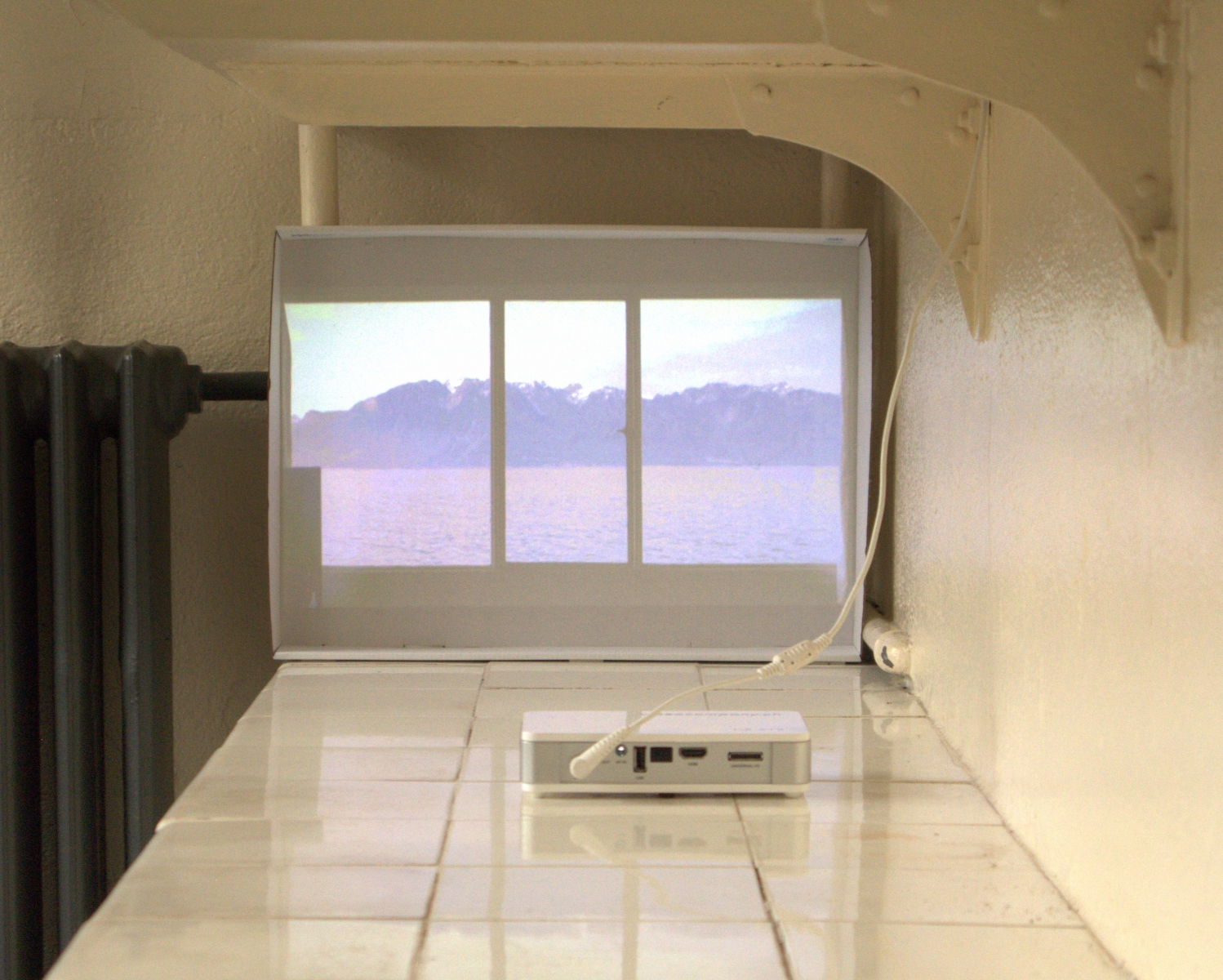 Installed in the kitchen, Annette Gigon and Mike Guyer’s film captures the villa at various times of the day. 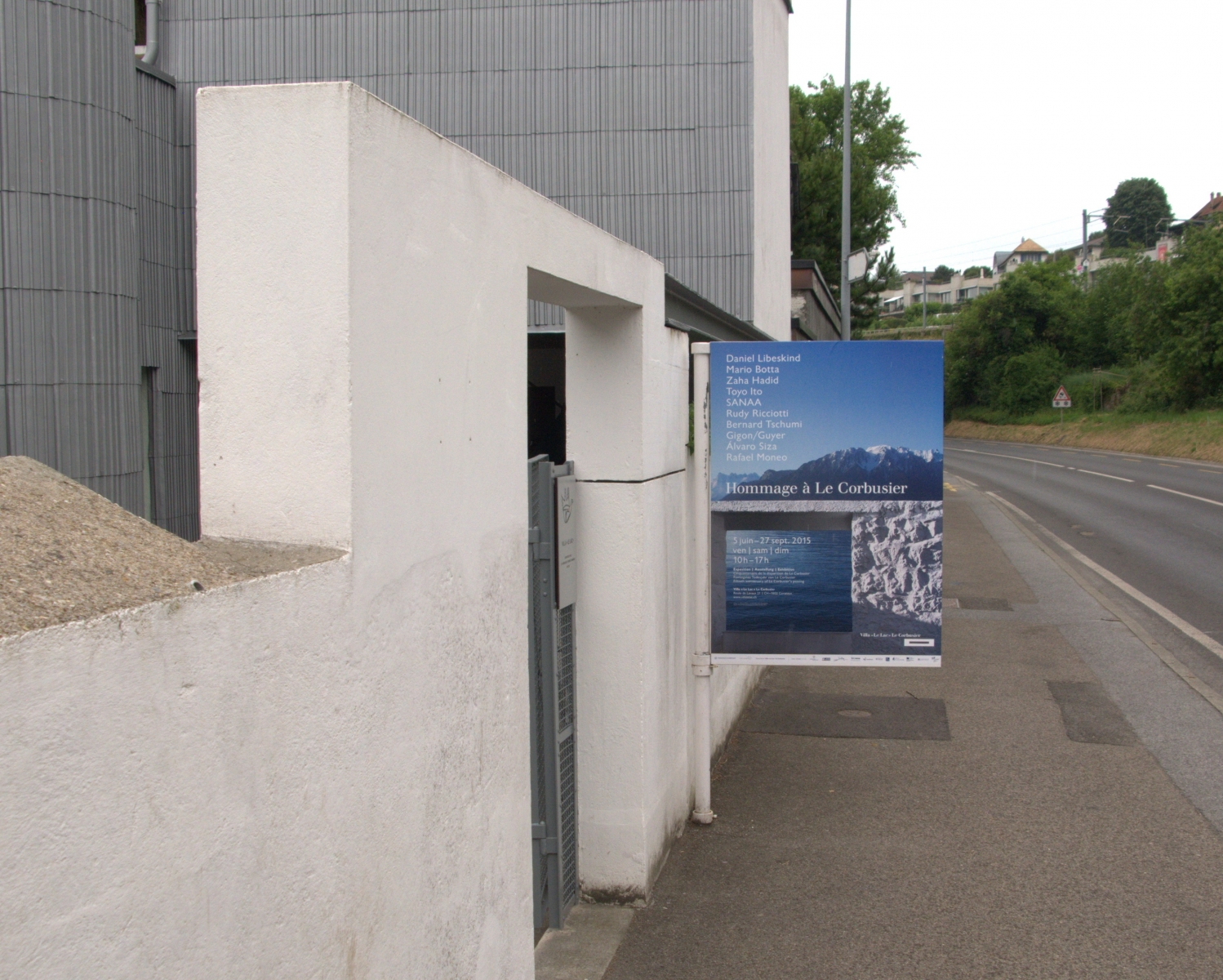