With the launch of the 2014 ELR, Cadillac revamps itself as a source of hip luxury.

Remember when owning a “green” car translated into owning a Prius? Not that there was anything wrong with that, per se, but for many years consumers had to choose between luxury and sustainability. But, in today’s culture, high-end car companies’ core market—successful and well-educated buyers—are increasingly going green. Industry leaders are taking note and rethinking the old theory that electric cars are for the bottom end of the market. After all, those young millionaires in Silicon Valley may care about the environment, but they still want to be able to enjoy the luxuries that come with a well-designed, premium car.

Cadillac is embracing this new wave of thought with its 2014 ELR—a sports coupe with a dramatic, forward-leaning profile, a sweeping body line, and an interior that combines intuitive technologies with the beauty of cut-and-sewn craftsmanship. The ELR uses the same powertrain as its GM predecessor the Chevy Volt, but it has a lot more power— Extended Range Electric Vehicle (EREV) technology provides full driving range of an estimated 340 miles—and unquestionably greater style. 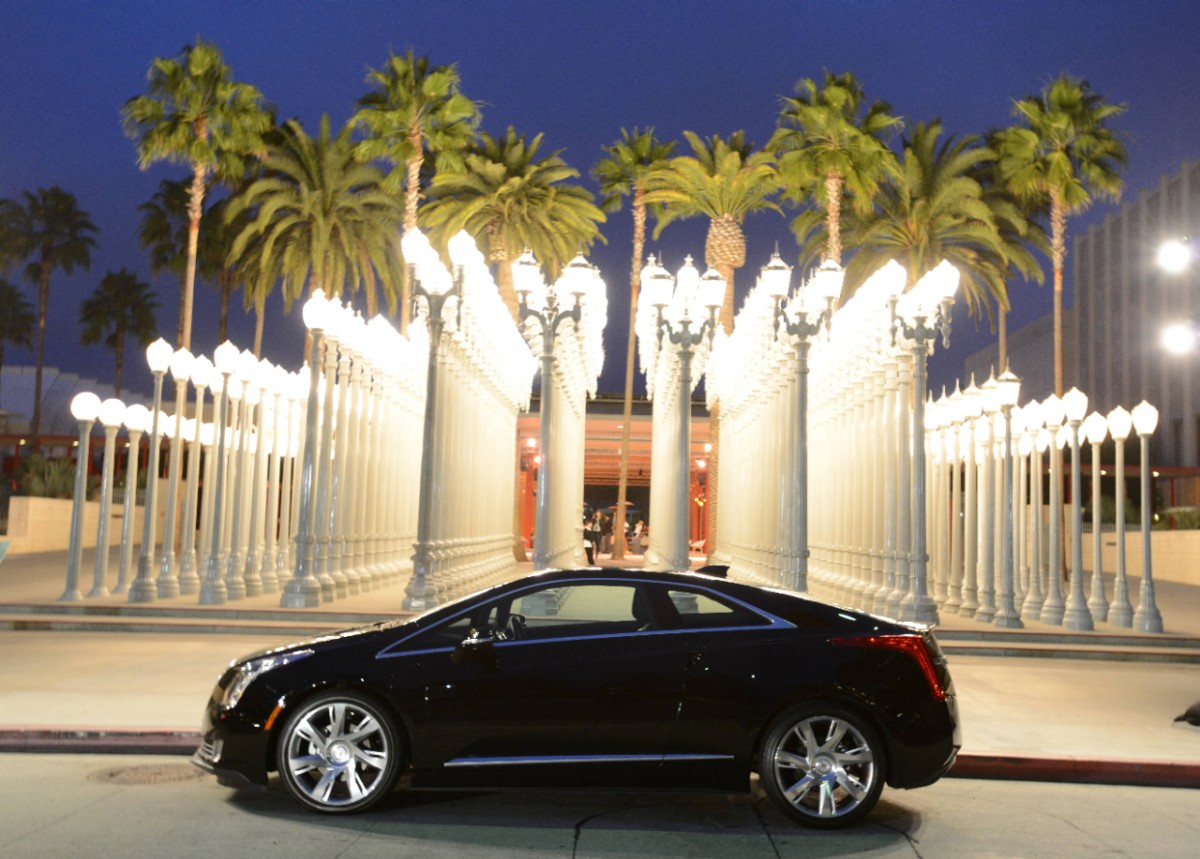 The ELR parked in front of the County Museum of Art (LACMA).

Cadillac is striving to be considered at the same level as Mercedes, Audi, and BMW (which just released its own electric car, the i3 sedan). The company has established the go-to mantra of “Cadillac Art and Design Philosophy,” defined as a blend of forward-thinking design and advanced engineering. It has made important inroads in the past year with accolades for its compact ATS (2013 North American Car of the Year) and mid-size CTS (2014 Motor Trend Car of the Year). The ELR bumps Cadillac up yet another notch. “The ELR is the only electrified luxury coupe on the market,” says product manager Darin Gesse. “And it represents the first application of Extended Range Electric Vehicle technology by a full-line luxury automotive brand.”

Overcoming the stigma of being the car that Grandpa drives around his Florida retirement village isn’t the easiest challenge. But the sexy and sleek ELR may be exactly what Cadillac needs to reach young, hip buyers—such as those young Internet executives that hold serious power when it comes to influencing society. And the company is counting on this. “The ELR introduces a design aesthetic that will come to define future Cadillac models,” says strategic design manager, Jeff Nield. “It’s a bold expansion of the Cadillac brand.”