New Exhibition Asks: What Is Design’s Role in Anxious Times?

The London Design Museum launches its refresh with a compelling exhibition that untangles the complexities of our age. 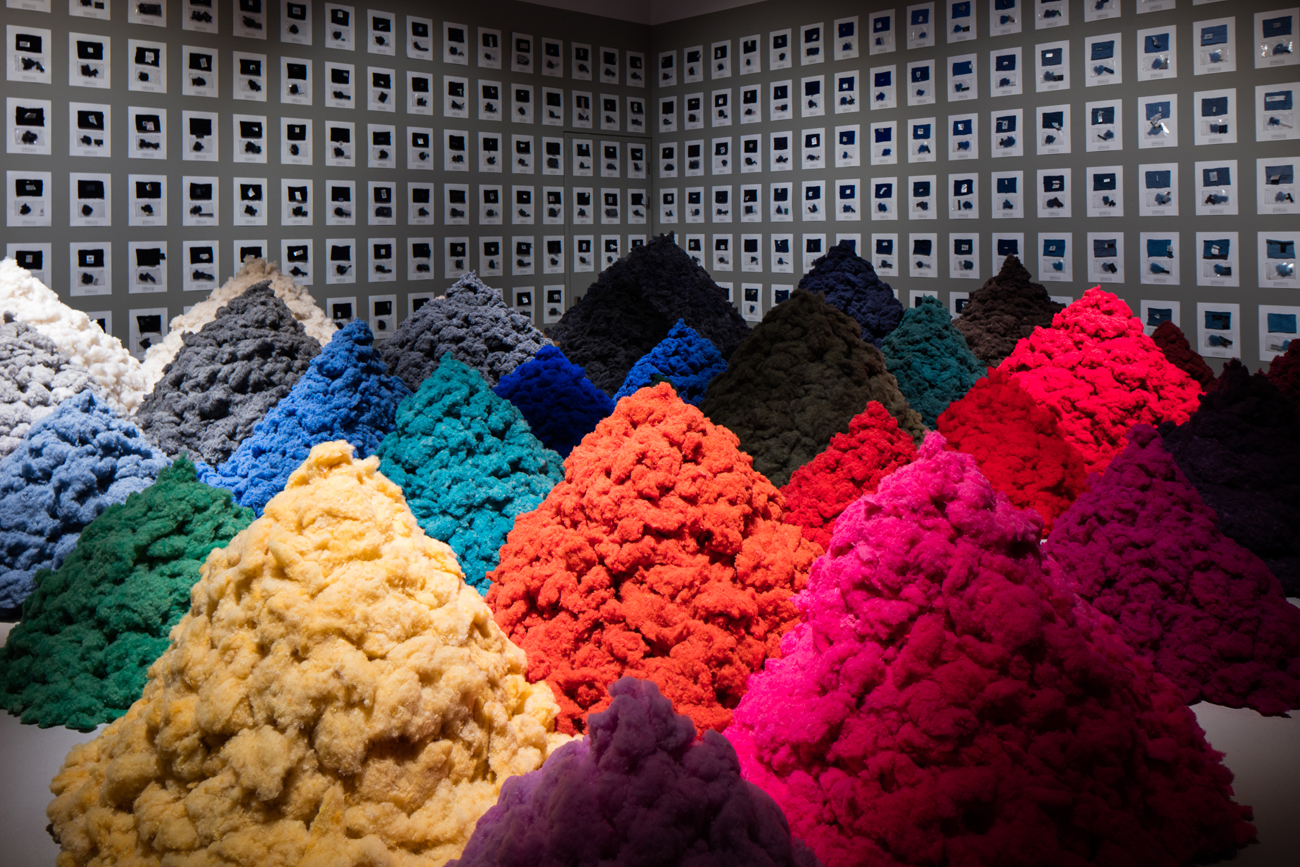 Christien Meindertsma’s Fibre Market, with its mounds of colored fabrics, leaves a lasting impression from Fear and Love: Reactions to a Complex World, the Design Museum’s new show.

Is anxiety a productive human emotion? It’s a question that looms over Fear and Love: Reactions to a Complex World, the headline exhibition at the Design Museum in London. The institution recently took a bold step by leaving its former digs—a sizable warehouse in Shad Thames in East London—for the refurbished Commonwealth Institute in South Kensington, which has been meticulously renovated by John Pawson. In doing so, it has tripled its floor space, allowing for expanded programming, exhibitions, and events. With the move, the Design Museum now stands to amplify its role in supporting, questioning, and engaging with design. But this ostensible boon comes with a gamble: To make the new location work, the museum needs to increase its attendance figures threefold. The question, which would strike anxiety into any organization, is whether this trifecta of new building, new location, and new programming will bring in the numbers needed to make it work.

To quell this anxiety, it will need some blockbuster shows. And so, in 2015 the museum brought on Justin McGuirk as its new chief curator. An accomplished editor and design critic who was previously at the helm of Icon magazine and Strelka Press and is known for incisive takes on the design world, McGuirk was a bold and inspired choice for the museum. Fear and Love represents his first big effort to devise a show that will attract visitors and keep them coming back for more. What is so remarkable about the show from the outset is what it doesn’t do. It avoids the blue-chip tropes of museum tent-poles that focus on retrospective achievements of singular designers and design periods. Instead it’s a show about eclectic and messy ideas that are often difficult to untangle, but ultimately worth the effort.

McGuirk’s premise for Fear and Love is as simple as it is elusive. He has invited 11 designers from varied disciplines and countries to create new installations that meditate on the increasing complexity of the world and design’s complicity within it. Implied in the title’s binary, cast in ominous flickering neon at the exhibition’s entrance, is a sort of feedback loop that designers find themselves in: The world acts on the designer, and in turn the designer reacts. The radical gesture in McGuirk’s brief, however, is the privileging of emotion. Design is governed by emotions, so the designer’s preoccupations and anxieties will ultimately affect what gets made.

Typically, optimism is the designer’s response. The designer sees a problem and then seeks to solve it. This problem-solving approach has increasingly come to define design’s professional calling card. It is not surprising, then, that Fear and Love offers up a handful of projects that reflect on the complexity of life today by proposing solutions. 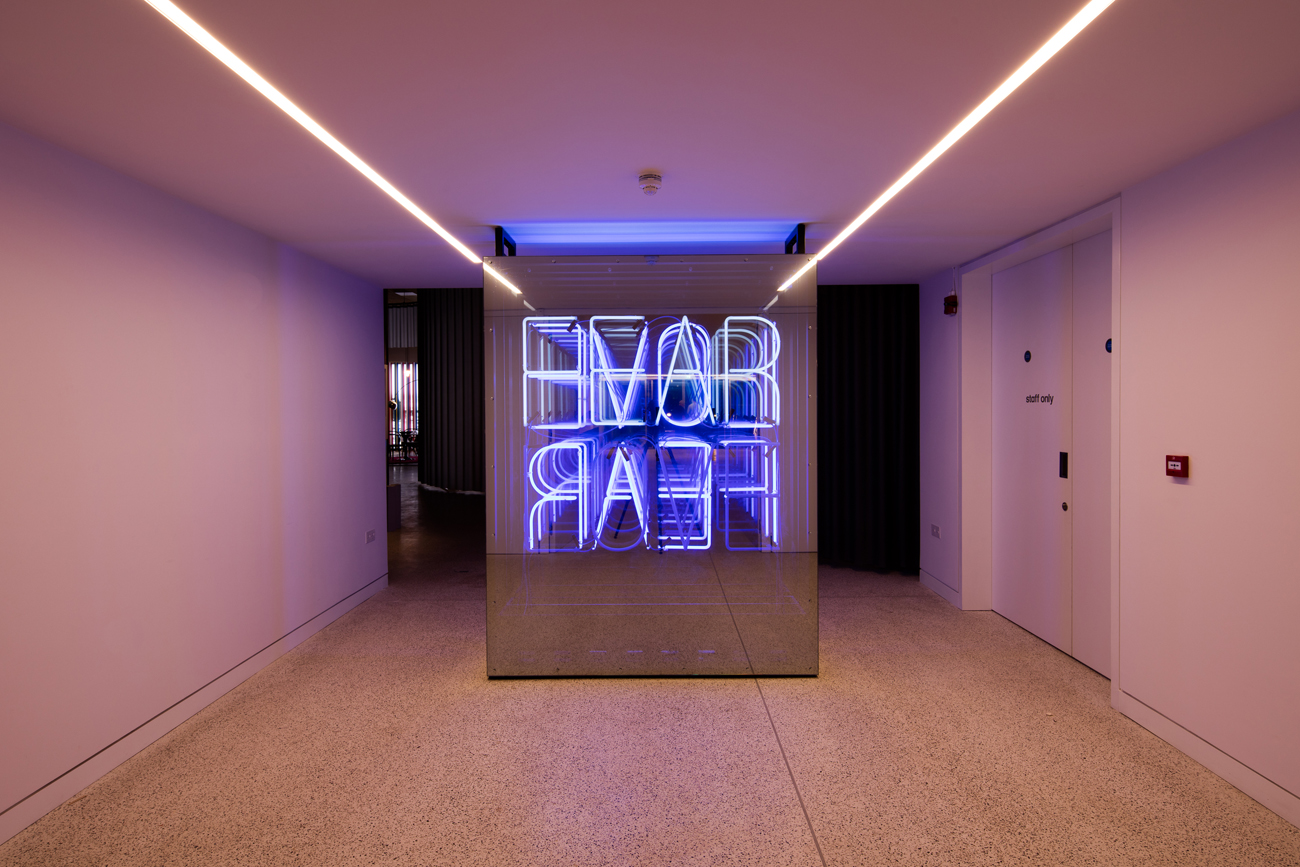 The neon-lit entrance to Fear and Love, which runs until April 23. Sam Jacob Studio and OK-RM’s exhibition design hold the show’s 11 disparate installations together.

In City of Nomads by Hong Kong–based architects Rural Urban Framework (RUF), for example, visitors are invited to sit inside a traditional Mongolian felt yurt, or ger, and watch a film depicting the struggles of nomadic Mongolians who have moved to the outskirts of the capital of Ulaanbaatar. These vast unplanned settlements are composed almost entirely of yurts, and settlers suffer accordingly from alienation and lack of access to resources. RUF identifies the problem and searches out ways that these yurts can be better planned and designed to create community. In turn the designers offer up a concept where structures can be linked and combined, creating alternating spaces for private and public use.

Similarly, in Fibre Market, Christien Meindertsma, a designer known for creating detailed taxonomies of supply chains, points to the problem of textile recycling, and the inaccurate and misleading ways fabric content in simple pullovers is labeled, making it virtually impossible for them to be properly recycled. Meindertsma worked with cutting-edge machinery to gather and analyze 1,000 sweaters and sort their fabrics into constituent colors and mate-rials. Large colorful piles of sorted material are assembled on a massive platform, while hundreds of swatches on the wall reveal inaccurate labeling. The installation serves as a critique of current industrial practices but also demonstrates the power of new sorting machinery to recycle fabrics in the future.

​Between optimism (love trumping fear) and retreat (fear trumping love) there is a third way, which seems to embrace fear and love in equal measure.

Other installations avoid solutions, and instead offer up another emotional response: retreat. For instance, the Chinese fashion designer Ma Ke in her installation The Earth presents her ongoing project called “Useless”. Ten years ago, at the height of her fame in the fashion industry but disillusioned, Ma stepped away from commercial production to focus on artisanal traditions. She established a studio in the countryside, employing rural women to process cotton to weave, dye, and stitch into garments. Nine garments are accompanied by a film by Shu Lei that documents the months-long operation to produce each piece.

OMA, which was involved in the master plan for the area surrounding the Design Museum, as well as the design of the luxury apartments adjacent to it, is also present in Fear and Love. It presents a retreat not toward the periphery but into the past with the Pan-European Living Room, by furnishing a showroom with 28 objects, one from each European Union member country. The objects are mostly design icons, including a wall clock by Dieter Rams (Germany), the E1027 side table by Eileen Gray (Ireland), and the Tulip dining table by Eero Saarinen (Finland). Looking at them together both reminds viewers of the incredible successes of the European project and sadly suggests its impending conclusion. OMA’s EU bar-code flag, which brings together all the colors of the European national flags, has been re-created here as blinds, and in a not-so-subtle gesture, the band representing the Union Jack has been left on the floor. 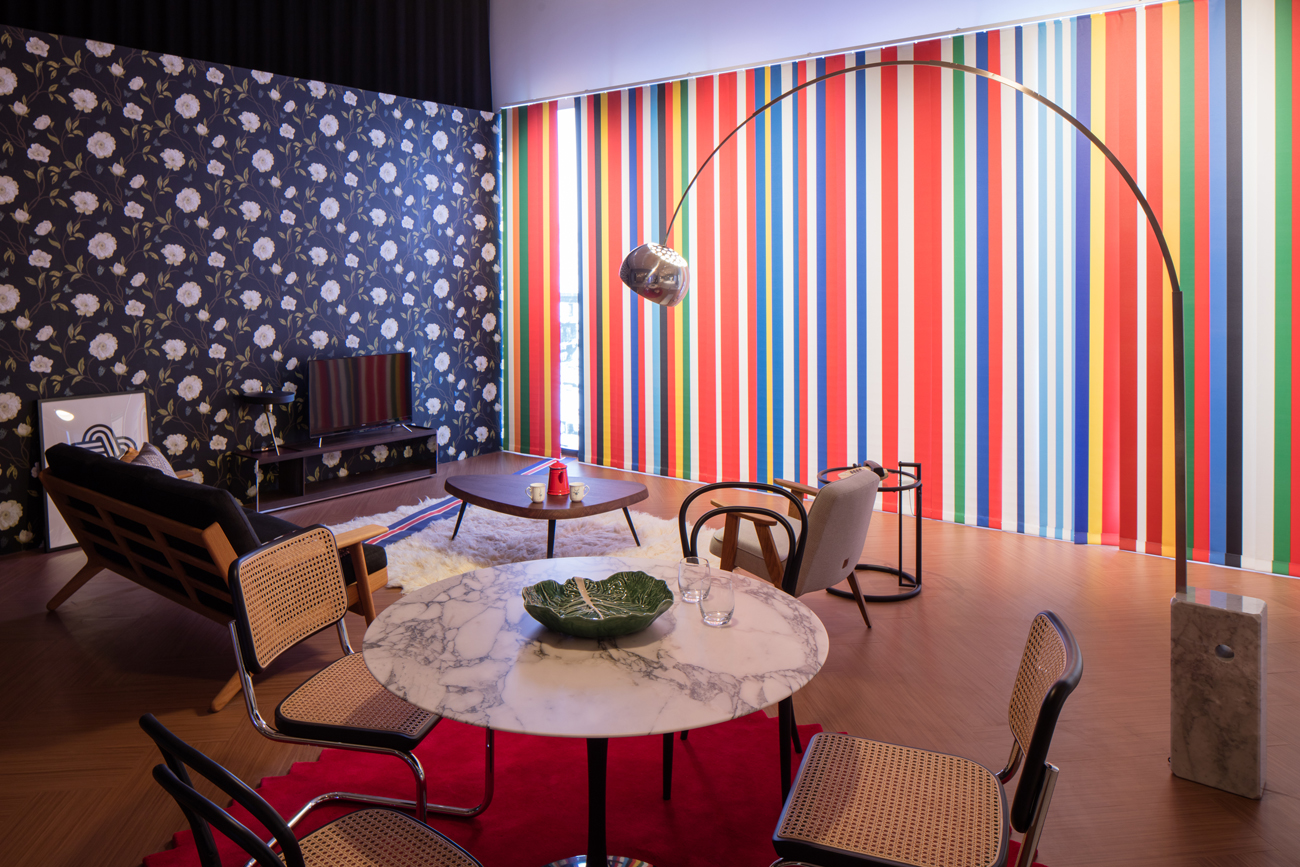 OMA’s Pan-European Living Room installation is elegiac about the fracturing of the European Union.

But between optimism (love trumping fear) and retreat (fear trumping love) there is a third way, which seems to embrace fear and love in equal measure. Projects in the exhibition that take this tack are perhaps the most beguiling, showing humanity’s most curious virtue—the ability to experience two opposing emotions simultaneously. They also highlight our tenuous relationship with design as a potential force for both good and evil.

For example, Andrés Jaque, in Intimate Strangers, presents a four-part multimedia installation that looks at the history and impact of the location-based dating app Grindr. The videos explore how the app has profoundly changed social “hookup” networks, enabling sex and love in new ways, but also how it has been used as a tool of violence and persecution. The final episode adds a positive spin, by looking at how Syrian refugees have relied on the app to seek out support networks and love in their struggle to find new places to call home.

It is Madeline Gannon, however, with her interactive robot Mimus, who manages to most succinctly distill the oscillations between fear and love that characterize our modern world. Quite simply, Mimus is an industrial robot arm—similar to ones used in countless factories around the world—programmed to seem lifelike. As you approach its transparent acrylic cage, it senses your motion and rapidly swivels and thrusts its head to greet you, cocking it slightly as if to examine your features. Just before you become bored by its presence, it tires of you first and swivels around to greet another visitor. There is a sweetness to the robot, and you could almost be duped into thinking of it as a pet. But there is also the dread that it is just one glitch away from doing something terribly violent.

2016 will likely go down in history as a bad-news year. And while design exhibitions have a tendency to be celebratory, we saw several design events in that year reflecting the zeitgeist by going darker in tone, from the Oslo Triennale’s questioning of community in After Belonging to the Istanbul Design Biennial’s Are We Human?, its foray into doubts about human nature. Fear and Love slots nicely into this critical turn. It is a show deeply rooted in the world around us, where design has been taken off the proverbial pedestal and cast in a new light that is emotional and contingent. If that makes you anxious, all the better, because as this show proves, anxiety can be a powerful driver of design. Fear and Love is an auspicious start for the new Design Museum, and if it can continue on this path, it has nothing to be anxious about. 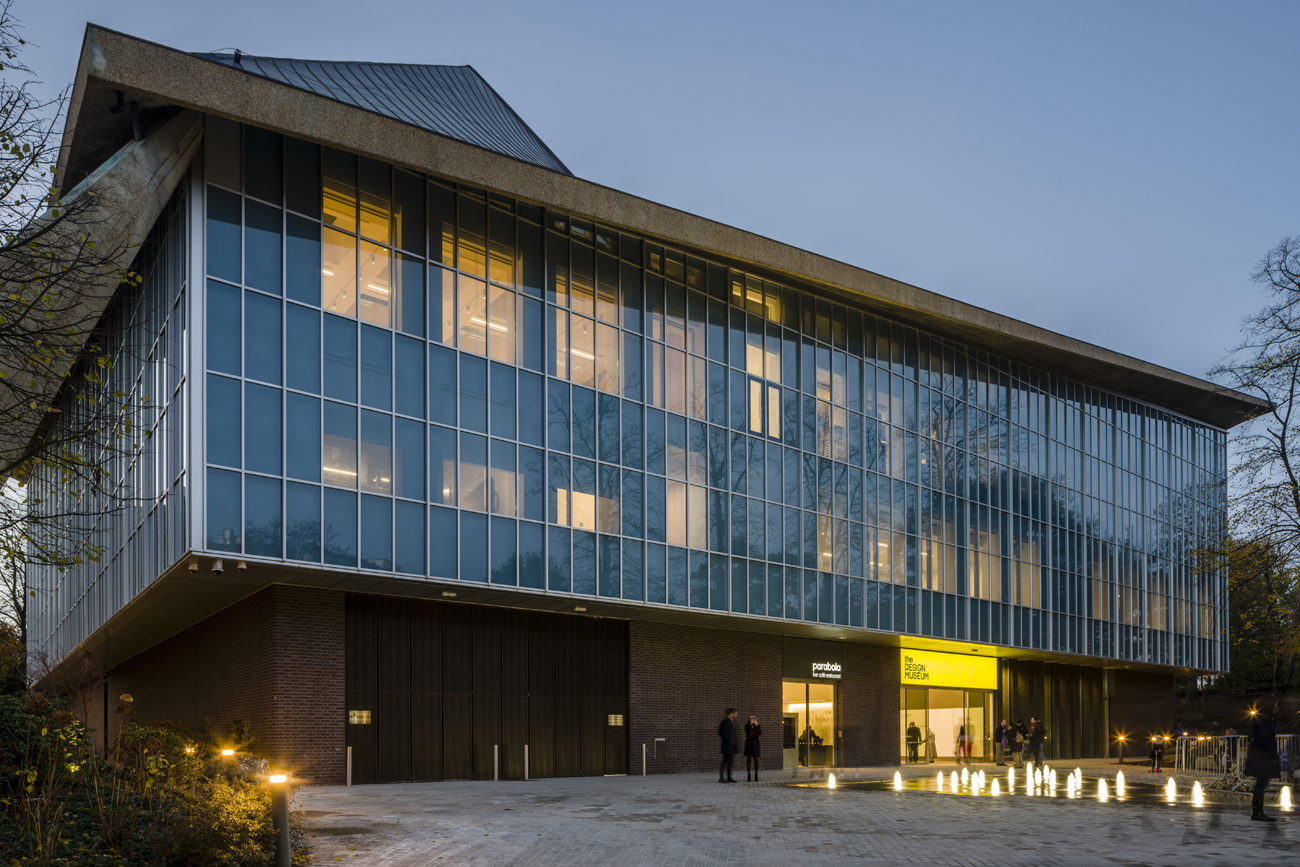 In November, the Design Museum in London reopened inside the Commonwealth Institute, a Modernist landmark. 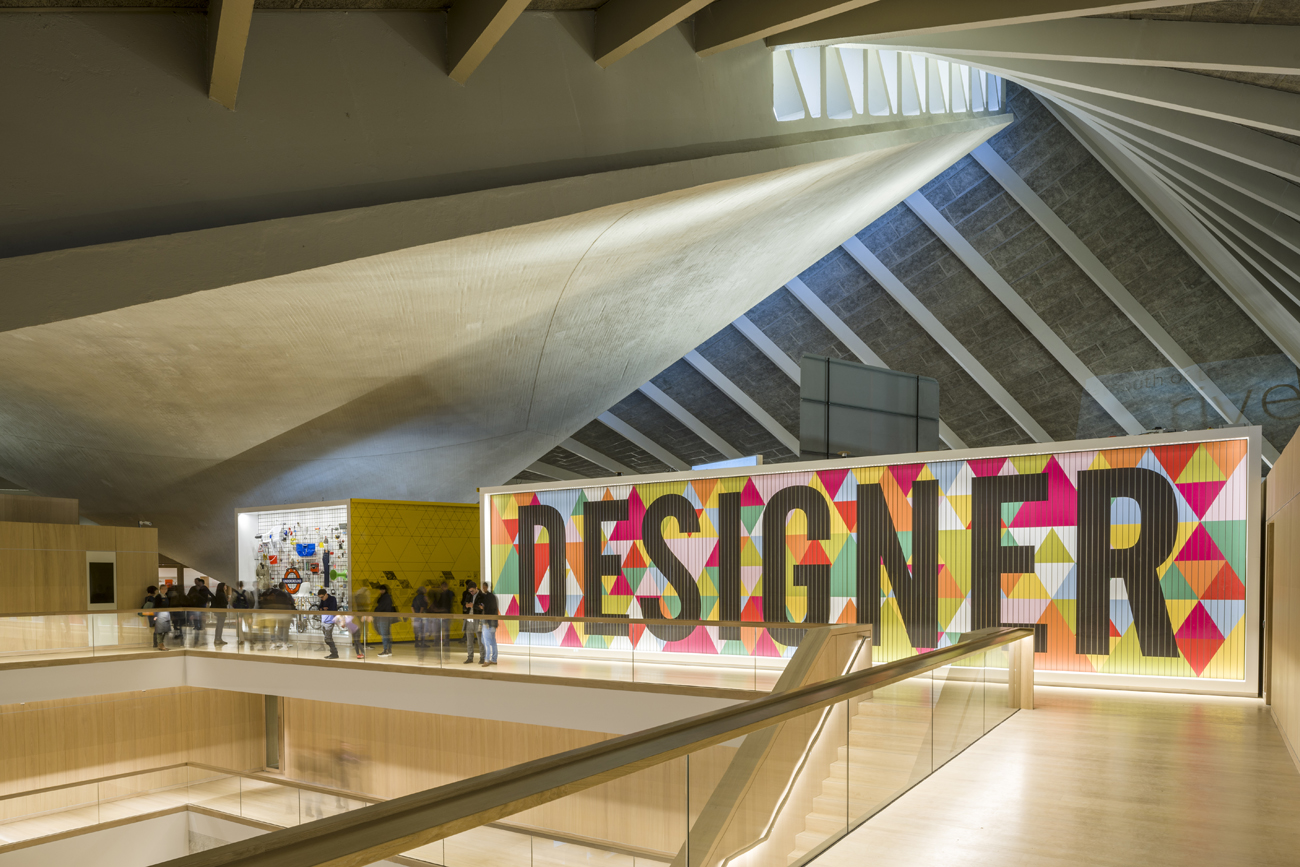 The interiors of the building were reconfigured according to designs by architect John Pawson.