What everyone is saying about Rem’s Venice curatorial effort.

Does anything at the current Venice Architecture Biennale even mean anything? What are people getting out of this exercise in curation? They flock to the biennale because they are like migratory birds and when the temperature changes they must go. For years and years it has been the “thing” in architecture, but with this one we are confronted with lots of things in the “thing” and this just might be its unraveling.

Edwin Heathcote, writing for the Financial Times describes the current incarnation of the biennale as “an exuberant display of architectural anxiety, a pixelated view of architecture not as a single, coherent cultural entity but as a series of micro-narratives, of parallel and often contradictory histories.” This is accurate and obvious and predictable given the cinematic career of head curator, Rem Koolhaas. Is it really surprising that his biennale has set off critical firecrackers scorching across the Web?

Peter Eisenman goes deeper still, claiming that “Fundamentals” is about the end of Rem, the end of architecture, the end of “archistars.” It’s about Rem taking down the biennale and with it all of architecture and himself, too. What did the biennale do to hurt Rem so that he would want to take it down? Nothing. The biennale is merely the venue to put on display what Kieran Long, writing in Dezeen, calls “a map of the Koolhaasian psyche,” a cynical and depressing series of “deep mineshafts” from which we are “unable to see horizontally, unable to achieve the kind of synthesis that the world needs from its architects.” But this is not Rem’s fault. This is just Rem being Rem and calling a spade a spade.  In his gaze, the state of architecture has already been taken down by globalization, manufacturing, efficiency, repetition, homogenization—any number of forces implicit in the shaping of the built environment beyond the architect’s grasp.

So why does Koolhaas need to put this on display? The Wall Street Journal’s Alexandra Wolfe gets closest to an answer when she manages to corner Koolhaas and delay him from taking his daily therapeutic swim session. In her interview with the auteur, we learn that the motivation for the exhibition’s sideways glance comes from his sense that architecture, for all his success at the helm of OMA, the Rotterdam firm he founded in 1975, has lost its way. “If you look here in this city [Venice], architecture was one of…the key ambitions that the entire city collectively had, but you only have to look at a contemporary city and see that it is less and less the case,” he says. He also tosses contemporary architects—traditionally the focus of the biennale—aside, saying “The pervasive caricature of the star architect is not particularly contributing to the greatest architecture.” Here he is, side-stepping this image of himself as the all-powerful architect to refocus our attention on those forces beyond architecture that have been central to his interests. 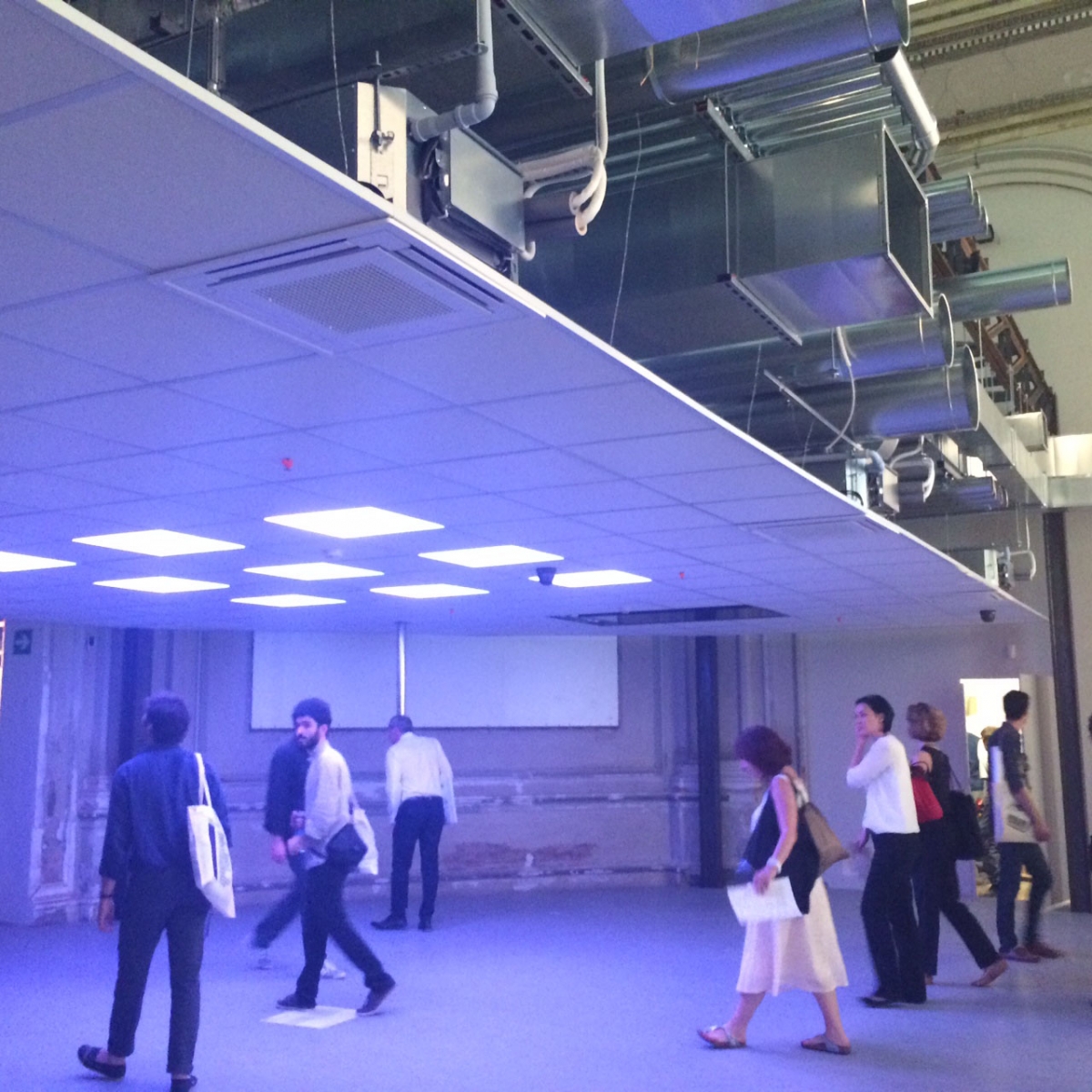 The “exploded” ceiling at the entrance of “Fundamentals”

“This is the end,” sang Jim Morrison. Eisenman may be right when he says Rem’s biennale is about the end of architecture. But he is wrong to surmise it signals the end of Rem. By laying bare the “fundamentals” as if opening a Restoration Hardware catalog, Rem seems to be asking architecture to take a deep breath, to take a step back from all its little games with adventurous form-making, to look inside architecture to find…what exactly? Its heart? Where can that heart be? Is it in the toilets, sinks, air ducts, windows, staircases and exit signs?