A new class of skyscrapers serves to reinforce the city’s steep social hierarchy.

What would a city owned by the one-percent look like?

New renderings for City Realty get us part way there, illustrating how Manhattan may appear in 2018. The defining feature will be a bumper crop of especially tall, slender skyscrapers piercing the skyline like postmodern boxes, odd stalagmites, and upside-down syringes. What they share in common is sheer unadulterated scale and a core clientele of uncompromising plutocrats.

The renderings instill a depressing sense of inevitability toward projects that should have been fought off. I don’t just mean one or two of these luxury towers, but all of them. Some of these designs threaten to mar the skyline for generations. One 57 is supposed to look like a waterfall, altogether failing. The “Nordstrom Tower” emerging on West 57th Street is plain enough to complement the suburban mall ethos of its eponymous tenant. 125 Greenwich offers another variant on tall, thin, and bland. The placeless, over-scaled Hudson Yards complex earned itself the label “Hong Kong on the Hudson.”

To be fair, other designs aren’t so bad. Among the best: Raphael Viñoly’s 432 Park Avenue cuts a distinguished profile comprised of seemingly countless right angles. Jean Nouvel’s eye-catching MoMA Tower on 53rd Street has a slightly off-kilter pyramidal form. Its lower floors will feature Museum of Modern Art exhibits, making it the rare luxury building capable of fostering joyful moments for the non-elite.

Some observers praise the sheer scale of this construction for helping the city recover its purported bygone virility. The Atlantic’s Kriston Capps asserts that New York can—quoting Nicolai Ouroussoff—once again be a “great citadel of capitalism” like Dubai, Singapore, and Beijing. (Must capitalism’s great citadels all be authoritarian?). That newfound urban vitality will register proudly in postcards but flatline up close. The fact that many top-end buyers seldom live in the city promises some pretty dead blocks. 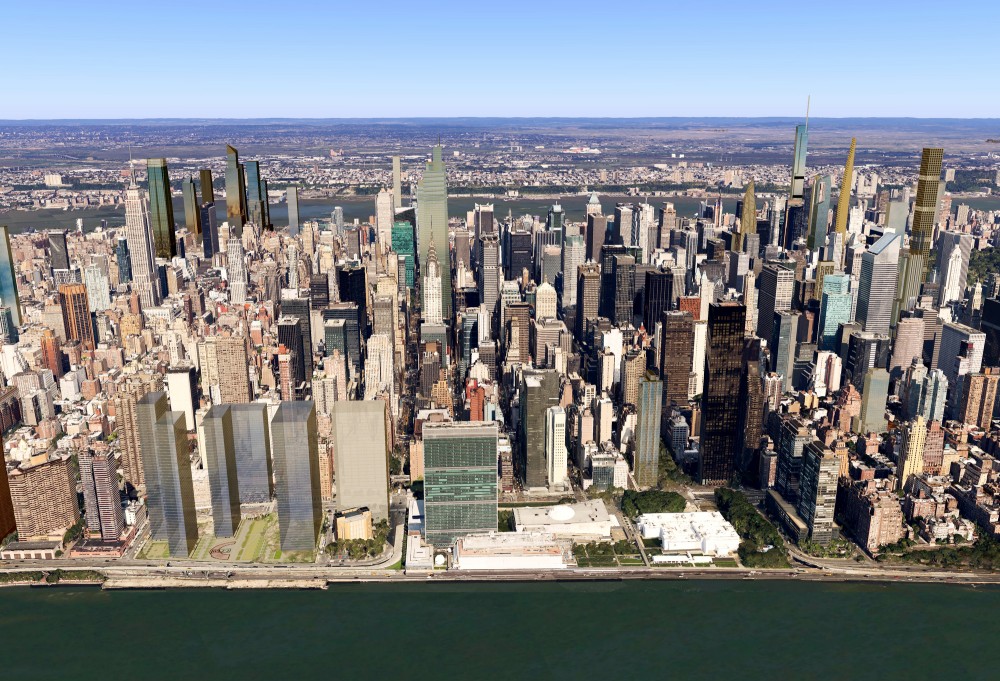 An ideology of trickle-down urbanism justifies the immoderate scope of this construction. Our erstwhile mayor explains it best: “If we can find a bunch of billionaires around the world to move here, that would be a godsend,” argued Michael Bloomberg. “Because that’s where the revenue comes to take care of everybody else.”

But do we absolutely need, as Bloomberg insisted, a built environment that caters first and foremost to the absurdly rich? The argument ignores the fusillade of social supports flowing upward, paying for elite home and work lives. As the New York Times explains, buyers of ultra luxury units get massive tax breaks. Developers take advantage of heightened demand for these safety deposit boxes in the sky.

Vast public sums also underwrite the corporate economy upon which the highest strata thrive. This includes skyscraper construction around the city. For example, the World Trade Center, Bank of America Tower, and Goldman Sachs headquarters are creatures of state as well as market. (Their exclusive benefits are extensively documented by Good Jobs New York’s useful reportage on city subsidies). 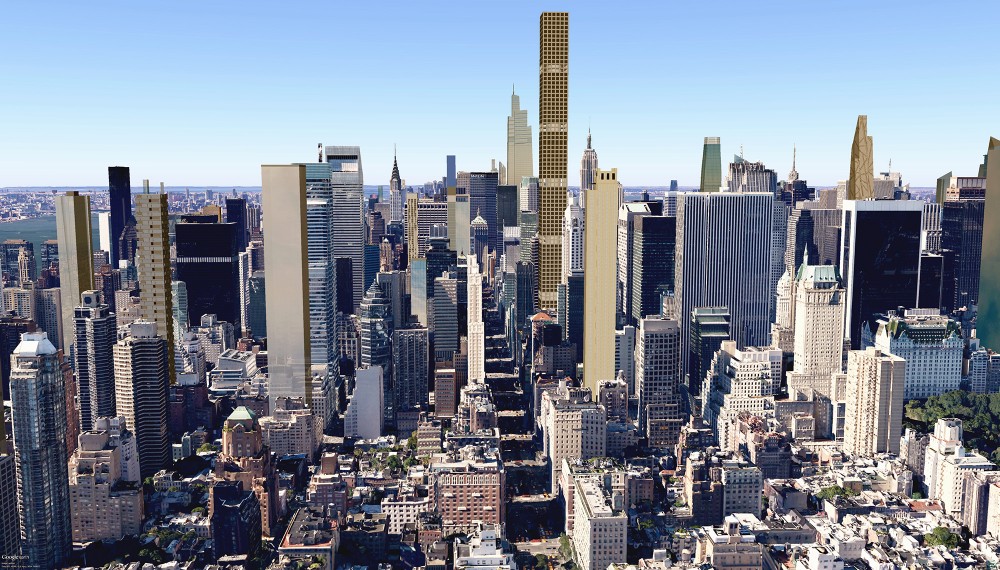 View from the Upper East Side facing south

My point here is that the luxury city is a policy choice rather than free market inevitability, and there are always alternatives. Public housing faces vast backlogs in basic repairs. Why not place scarce municipal spending power there instead?

Proponents of trickle-down urbanism still hold up luxury construction as a social good, promising to alleviate housing scarcity by increasing overall supply. This ignores segmentations in the housing market. Solving a housing crisis by building penthouses would be like trying to solve an automobile shortage by manufacturing Bentleys. Left to its own devices, the “free market” is producing the wrong kind of housing.

Even if the overall supply mattered, luxury condo buildings are still wonders of inefficiency. 432 Park, the tallest residential skyscraper in the Western hemisphere, will have only 104 units. A similar design by Viñoly at 125 Greenwich Street, which will be 1,358 feet tall, plans just 128 units. One57, which peaks at more than 1,000 feet, adds a paltry 92 units to the city’s housing stock. By comparison my relatively small thirteen-story building, built in 1957 on the Upper East Side, has 119 apartments.

The massive contradiction here is that the city is building so much to sell, yet so little to use. Should New York City developers—whom you’d think would be obliged to produce actual living spaces—be in the business of wealth storage?

When it comes to the investment demands of the global one-percent, no subsidy is too conspicuous, no height or sales records are safe. Could trickle-down urbanists ever advocate meeting social challenges with equally bold ambition? What these buildings really reflect is the impoverished political imagination of the times. They will tell posterity how we reinforced steep social hierarchy.

Joshua K. Leon is an assistant professor of political science and international studies at Iona College. His writing on cities appears in publications including Metropolis, Dissent, and Foreign Policy in Focus. His book The Rise of Global Health: The Evolution of Effective Collective Action is due out next spring. He lives in Manhattan.