The Porsche Design Tower is an apt symbol for the self-absorbed hedonism of Miami’s one percent, who continue to ignore the very real threat of rising seas.

Florida is a state in denial. Miami is in the midst of one of the largest building booms in the region’s history. Dense crane canopies pepper the city’s skyline as they soar over forthcoming white, gold, and aqua clad “high end” residential and hotel towers. This massive stream of investment dollars is downright paradoxical considering the impending calamity that surrounds Southern Florida: The National Oceanic and Atmospheric Administration predicts that the sea level could likely increase almost 35 inches (0.89 meters) by mid-century. If current trends continue, that number is anticipated to rise to up to 80 inches (2.0 meters) by the year 2100, threatening the habitability of the entire metro area.

Given that harrowing scenario, Miami is either refusing to acknowledge the inevitable, or desperately trying to become relevant enough to be saved—not that saving the city is actually feasible. The region sits on extremely porous limestone which pretty much rules out the option of a Netherlands style sea wall. If the Atlantic couldn’t make any horizontal inroads, the rising tide would simply bubble up from below.Miami’s pancake topography doesn’t stand a chance.

The current governor of Florida, Rick Scott, has overseen an economic recovery in the wake of the Great Recession. Unfortunately, the anti-regulatory, pro-development politician is a fierce climate change denier. Infamously in 2015, according to the Miami Herald, employees from his Department of Transportation, Health and South Florida Water Management claimed that they were instructed not to use the phrases: “climate change” or “global warming” (the Herald also reports that despite the allegations, the governor repeatedly denied their validity). Scott’s inaction continues as circumstances become increasingly dire.

Emerging out of the ideological stew of the purple state’s real estate boom is Dezer Development’s Porsche Design Tower which, barring Zaha Hadid’s posthumous and stunning One Thousand Museum Tower in downtown Miami, is arguably the most significant high rise under construction in the Miami area. In 2016, Porsche—a name traditionally associated with superior automobiles—now graces everything from exorbitantly priced external hard drives to $80 t-shirts. Partnering with established developers to construct the swankiest condominiums in the Sunshine State was the logical next step for the Porsche Design Group. The much-anticipated construction is a $560 million skyscraper nearing completion in Sunny Isles Beach, a few miles north of Miami Beach. This 57 story, 641 foot (196 meter) tall structure will consist of only 132 units. Ranging from 3,800 to 9,500 square feet (350 to 880 square meters), these will undeniably be some of the most exclusive residences in the city. 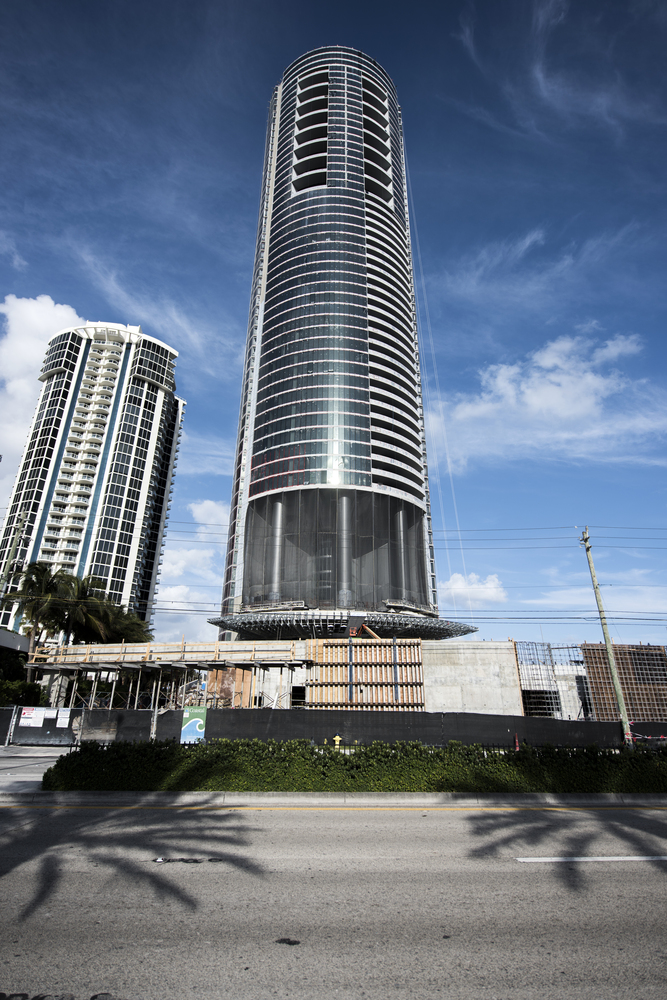 The big commotion surrounding this tower isn’t over its architecture. The chunky glass cylinder designed by the Sieger Suarez Architectural Partnership is disappointingly nondescript. There’s little to distinguish the facade of the glass and steel behemoth from the rest of the Collins Avenue strip. Just like Sunny Isles Beach’s Trump Towers a couple of miles South along the coast (by the same architect and developer) the building is yawningly symmetrical, and clearly amenity focused. The project makes a deliberate effort to disengage from the public. The structure itself hugs the beach, and is significantly set back from Collins Avenue. Its dual driveway approach is both inclined and curved, discouraging pedestrians from wandering inside. In the president of Dezer Development Gil Dezer’s own words: “We’re really making [these buildings] a self contained city, so you don’t have to leave”.

Forget the Stuttgart branding, 10 foot by 15 foot (3 meter by 4.5 meter) plunge pools integrated into every unit’s balcony, the massive square footage, the 20 foot (6 meter) high ceilings, the remote controlled toilets, and the panoramic views of the Atlantic. The Porsche Design Tower is interesting because of its one party trick: the Dezervator. Yes, the developer has named the building’s elevators after himself, and they’re patented. That is the sole reason that this tower has caught the public’s eye. The contraption is incredibly decadent, but an admittedly impressive engineering feat that makes the building’s floor plan quite intriguing.

The Dezervator is a fully automated car elevator powered by electricity and hydraulics (there’s currently no plan to power them off any alternative to the South Floridian grid). Three Dezervators whose energy-hogging acrobatics operate independently of one another cleverly meet in adjoined circles occupying the hollow concrete core of the tower. Inhabitants can drive their automobiles right into the building and get transported directly up to their condominium all without leaving their car or having to deal with a valet. The building contains 284 apartment-adjacent parking spaces for its residences, allowing owners to leave up to four cars (in the more expensive units) right at their 50th floor doorstep. The Dezervator finally fulfills the long held gear-head fetish of being able to “sleep with your sports car.” According to Curbed Miami, Dezer claims that the gimmick has seduced no less than 22 billionaires (over 1.2% of the world’s total!) who have purchased units in the tower, which opens in a few months.

It’s little surprise that the Porsche Tower is a glorified garage; the developers are obsessed with automobiles. Dezer Development is a New York City-and-Miami based father-son business that was founded in 1970 by Michael Dezer. In 1985 he set his sights on buying and developing 27 acres of the Floridian coastline, largely in Sunny Isles Beach. To this day he is one of the most prominent oceanfront property owners in Florida. Gil Dezer, Michael’s son, orchestrated the Porsche deal and owns 29 cars, 17 of which are Porsches (including a 1950s Porsche Spyder 550 fixed directly into the wall of his Trump Palace condo). But these 29 vehicles are a paltry number when compared to his father, who owns over 1,000 vehicles that are on display at the Dezer Collection Museum in Miami. These powerful men have immense influence over the future of the city. Given Miami’s trajectory, it was almost inevitable that the Dezers have partnered with and are enthusiastic supporters of Donald J Trump.

Trump has previously collaborated with both Dezers on ostentatious Trump Tower projects: “We’re best known for our six buildings we’ve done with Donald Trump, hopefully our future president… The future [for Miami] is very bright” boasts Gil Dezer on a Miami New Construction Show interview. According to the Center for Responsive Politics (a nonpartisan nonprofit research organization that keeps track of campaign contributions) Michael Dezertov (Dezer for short) donated $100,000 to one of Donald Trump’s largest Super PACs, the modestly titled “Make America Great Again PAC.” The Republican Presidential Nominee has famously denounced climate change as “a total, and very expensive, hoax” and a concept “created by and for the Chinese in order to make U.S. manufacturing non-competitive.” Trump has also sworn if elected president, to “cancel” the United States’ participation in the Paris Climate agreements due to the strict environmental regulations and turn our back on the rest of the civilized world. Coastal Risk Consulting (a flood risk assessment company) estimates almost 100 days of flooding per year in Sunny Isles Beach by 2045. Considering that the city sits a mere three feet above the encroaching Atlantic, it is clearly in the Dezers’ interest for him to become commander-in-chief if they want to continue stealing sky in a submerging city.

Although the state of Florida blithely ignores the issue and the potential consequences of climate change, and developers’ seaside towers continue to rocket skyward, local governments can’t afford to wait. Despite an annual budget of around $500 million, Miami Beach is spending $400 million ($160 million less than the budget of the Porsche Design Tower) in an attempt to delay the inevitable. The funds will provide the city with 80 new pumps designed to relocate seawater that regularly floods Collins Avenue as well as serving as a last line of defense against the contamination of Miami Dade County’s low-lying potable water reservoirs. Yet meanwhile, the Sunny Isles Beach City Commission unanimously approved the Porsche Design Tower in 2011. As nearby Miami Beach starts to invest in anti-flood infrastructure, it is practically an inevitability that Sunny Isles will have to pony up some taxpayer dollars in the near future to protect its privately owned towers.

On his “anonymous” (and public) Instagram profile Gil Dezer, aka gdizzle99, allows us a glimpse into his privileged life via dozens of photos and videos: million dollar supercars, a yacht, various watches, a private jet embellished with the Dezer Properties logo, plus a cheerful mugshot of CNBC’s Robert Frank presumably taken last year while recording Dezer’s very own episode of “Secret Lives of the Super Rich.” Gil also offers teasers from the construction site, including a breathtaking time-lapse of the Dezervators in action. The video offers a rare glimpse of the triple-contiguous vastness that defines the plan of the tower. To gild the lily, Gil elegantly captions another photograph of the Dezervator: “Does anyone know what this is? Hint: #ladieslovemyshaft There’s a prize to the hottest girl who loves the #shaft.”

The realtor for the project (and VP of Sales for Dezer Platinum Realty) is the self proclaimed “Condo Queen of Miami,” Ms. Lucrecia Lindemann. She smiles from online banner ads that proudly tout the minimum sticker price of a condo in the tower as “six million plus.” When asked via email if clients had expressed concern over sea level rise and the potential loss in value of their investments she never responded.

Unfortunately this very real threat of rising seas encroaching on low lying property will continue to be ignored until the city is literally drowning. The Porsche Design Tower is an apt symbol for the self-absorbed hedonism of Miami’s one percent. As Gil Dezer writes on his Instagram bio: “The one who dies with the most toys, WINS!!!”

Thomas Musca was the assistant curator for the Architecture and Design Museum’s 2013 exhibition Never Built: Los Angeles. He is currently studying architecture at Cornell University.