WATERSHED, a large-scale public art projection, is raising awareness about global warming. It arrives in New York City this fall.

When I returned to New York after the 2009 Climate Change conference in Copenhagen, I kept thinking about the island of Manhattan as a fragile piece of earth, far closer to the Atlantic Ocean than we realize as we go about our daily lives. And so I began the WATERSHED project.

I was awarded a one-year fellowship at the LABA Foundation, which invites artists from different disciplines to study the scriptures, from a non-sectarian perspective, with a scholar. I could not help but think of flooding, especially at LABA’s location on 14th Street where the axial nature of the street as an artery that connects the Hudson with the East River. So, one evening, I decided to project a video of “frenzied fish” onto the sidewalk of 14th Street. This was to be an interactive work where people would have the sensation of walking on a river of fish. My intention was to raise awareness of the city’s island relationship at the mouth of the ocean.

In 2013, just after Superstorm Sandy, WATERSHED was shown as an indoor and outdoor work during the New Museum Festival of Ideas. I projected the video onto the wall of St. Patrick’s Basilica on the Lower East Side, an area that was especially hard hit by the storm.

Later I developed this work further, strengthening its impact through the integration of sound and scientific data. The massive scale and public venue of the installation are key to transforming this work into an informational vehicle. In its new form, my mission for WATERSHED is to catalyze conversation about climate change and infrastructure issues critical to the future of waterfront cities. The work acts as a moving warning sign, subtly enveloping people with its captivating sounds, images, and large-scale presence as a projection in a way that is simultaneously healing and impossible to ignore. 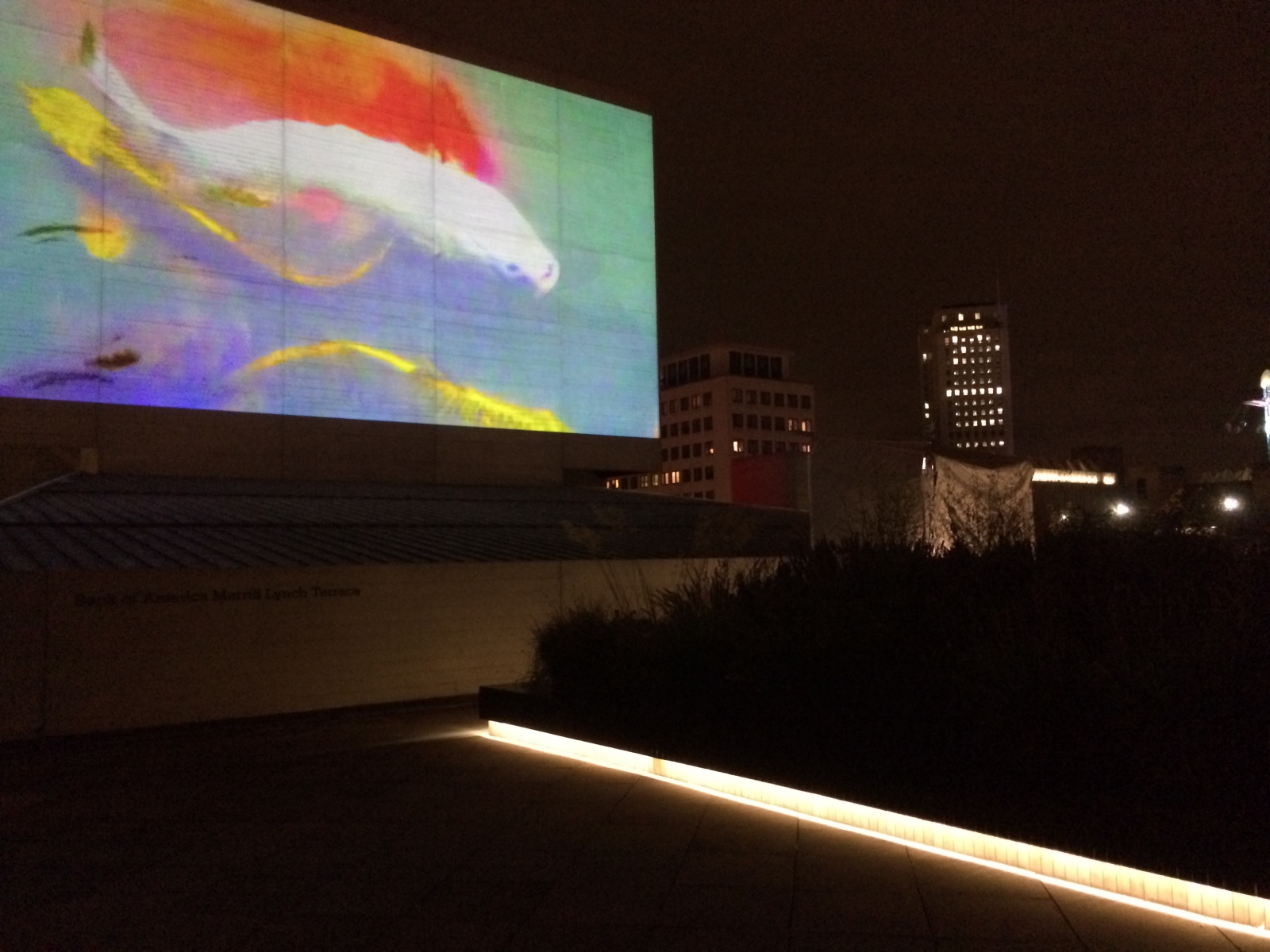 WATERSHED and I traveled to London where it was inaugurated as a large-scale public art projection on the face of the National Theater on the Thames last September, during the Totally Thames Festival. Another waterfront settlement, London and its surrounding neighborhoods are experiencing flooding problems caused by climate change. As the tides and temperatures of the Thames continue to rise, Londoners are confronted with questions of how best to protect themselves from flooding. As a recent BBC report stated, “At the moment, with so much rainfall travelling down the Thames, there is a danger during high tide that the extra water will be pushed back up river by the sea and cause flooding in the capital and to the west.”

WATERSHED projected the natural world into the urban space through large-scale, hypnotic images and sounds of fish and flooding water onto the face of the fly tower of the National Theatre. For six nights, it invited millions to learn about global warming as they watched the mesmerizing images of colorful fish. This public art/public space initiative was designed to highlight how climate change is impacting people’s lives in intimate ways, affecting where we can live, what we can eat, and our physical and emotional health. At the same time it serves communities by providing an engaging and encompassing virtual seascape where viewers are brought into dialogue with each other and their surroundings as well as with the work itself. By transforming the urban landscape into a virtual sea, WATERSHED has entered into the current dialogue about our need for better infrastructure and catalyzes community awareness of the city’s relationship to water. 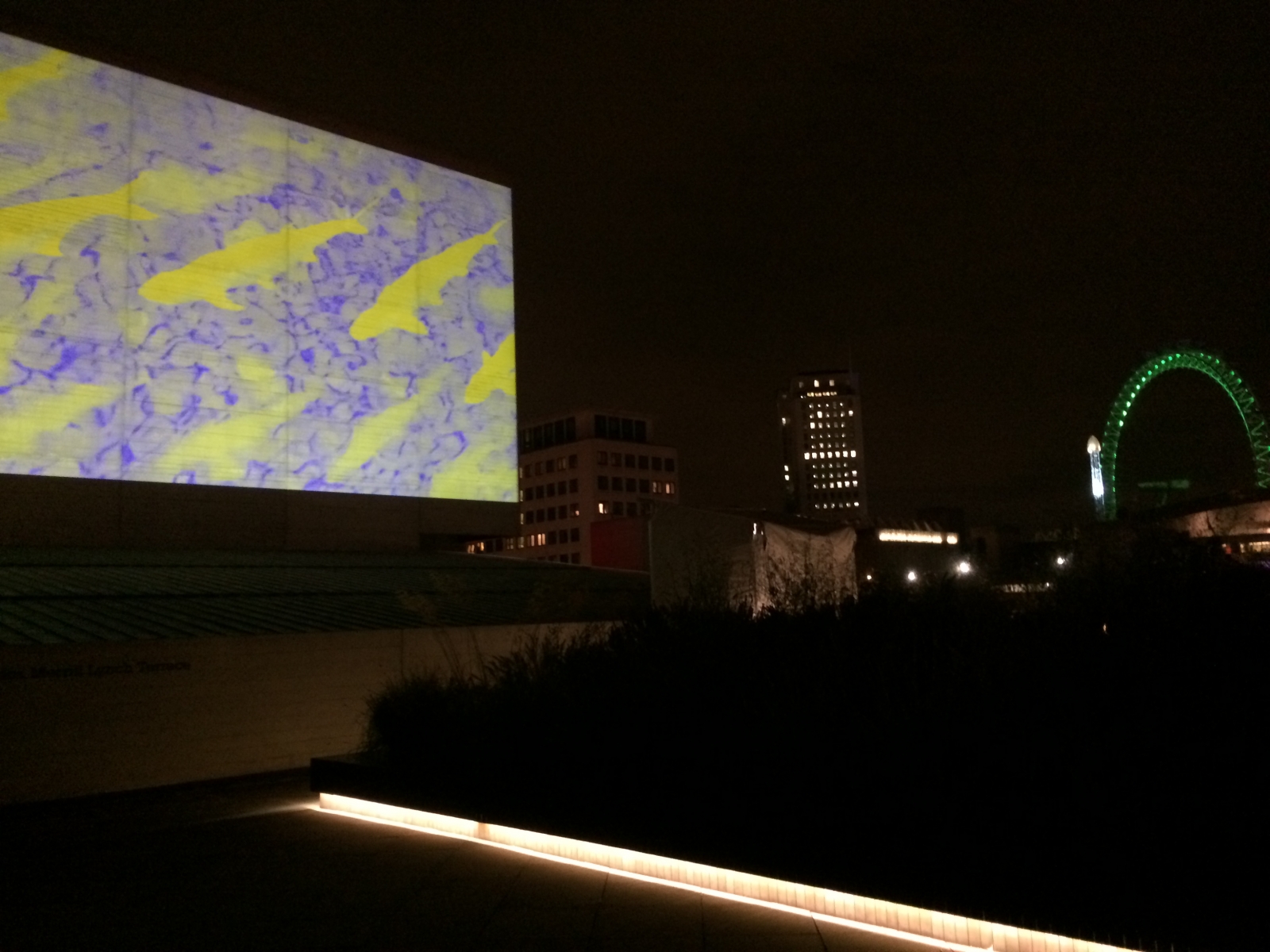 Until Sandy, most New Yorkers navigated their city, largely unaware of its proximity to water. But the flooding changed this. It provided a painful wakeup call to the fact that we are island dwellers, living in close proximity to the ocean. In the fall of 2016, I hope to bring WATERSHED to New Yorkers, a community that speaks increasingly about the dangers as well as rewards of our waterfront location. I’m working to identify and involve local community leaders, urban planners, and climate change experts in discussions to address global warming issues specific to my hometown. We’re working on a website that will be an informational resource and educational tool about global warming.

I’d like to thank my gallery and sponsors for their support of the project. They are:  Totally Thames Festival, Cynthia Reeves Gallery,  Generation Investments, Arcadis, and Art W.