Q&A: Jan Gehl on Healthy Cities and the Real Meaning of Architecture

The architect-planner discusses the ideas, influences, and concepts that have informed his philosophy and practice.

Having been instrumental in helping Copenhagen shape its identity as the world’s most walkable city, architect and planner Jan Gehl discusses the ideas, influences, and concepts that have informed his philosophy and practice.

Mikki Brammer: You’re often associated with the idea of making cities “healthier.” What do you mean by the term?

Jan Gehl: I’m neither the first, nor the only one, to point out that in the past 50 years we have practiced city planning that invites people to be inactive in their lives. You can spend your entire life behind steering wheels, or computers, or on sofas, and in many cases you don’t have to move a muscle from morning to night. This, of course, has been identified as something that is very dangerous for mankind.

MB: How can cities rehabilitate themselves for the benefit of their population’s health?

JG: The United Nations now has a strategy that says that every city should have its citizens walk and bike as much as possible on a daily basis. We can certainly make city planning that invites people, to a much higher degree, to do the things they do by using their own muscles—whether it’s walking, bicycling, or whatever—so that they have their dose of the recommended one hour of moderate exercise every day. Not only will that add extra years to people’s lifetimes, but it will also create a much cheaper health system because people will have a higher quality of life and will be much less dependent on hospitals and medicine. For me, that’s health-oriented city planning.

MB: As you know, we recently just published the Metropolis list to the world’s most livable cities. What are your thoughts on these kind of surveys?

JG: My experience is that they have a very positive effect, because these winning cities use it heavily in their marketing and it gives them an increase in city pride. I have also seen many times in cities where I’ve been called to a meeting where the city council has decided it wants to be on the list of livable cities, and they ask me what they can do to achieve it. So I say keep going with those lists, but be sure that the criteria is well established beforehand. You often see lists that are confusing because the criteria is very different.

MB: So what do you think are the key measurements for a livable city?

JG: I won’t have a take on that one because I would be shooting from the hip! I think it should be more considered, and so I couldn’t just list ten things. I would say, more generally, that any city today should try to make itself more livable, more sustainable, and healthier. Any city council around the world should have this goal on its agenda. Of course, you can define livability in various ways, but sustainability and health can be rather precisely defined. So after first looking at those we can talk about livability. 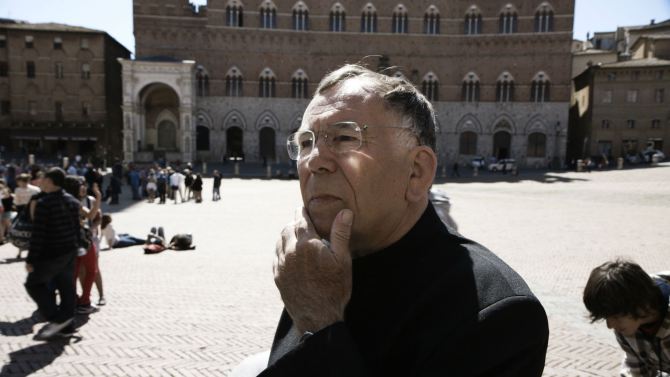 Gehl seen in Siena’s Piazza del Campo, from the 2012 film, The Human Scale

MB: When did you first begin to think of design as a pedestrian-centered practice and not one exclusively concerned with buildings or placemaking?

JG: Well, that story goes back more than 50 years back. I graduated in 1960 and that was the time when the new ideas of Modernism and Motorism were overwhelming societies. A lot of things were built and a lot of infrastructure for cars was made. I was a young architect and I was rushing out to do all that—and then I married a psychologist. I then started to make a number of connections between young architects and psychologists where we started to discuss what really makes people happy and what was really the best thing we could do for society. That was the beginning of 50 years of studying how people use cities, streets, and public spaces, and how housing areas worked. It quickly became apparent that the whole interaction between life and built forms had not been studied at all.

Jane Jacobs in New York was one of the first to point out that the technocrats were crazy and had forgotten about people in making their big plans. I started a few years after she wrote her famous book, The Death and Life of Great American Cities, but I actually didn’t know about her at the time and so I wasn’t influenced by her. But I was influenced by what was going on in Danish society and the social sciences—that happened as soon as I discovered the influence of the built environment on our behavior and wellbeing. Every time we build something, we manipulate the conditions of people’s lives, but most planners don’t know enough about this manipulation. We are manipulating every time we put down a stone.

MB: You’ve spoken about the importance of cultivating street life through all seasons, e.g. from the mild summers through the bitter cold of Northern Europe. What kinds of design strategies and public policies can help make this possible?

JG: I think a good example is the Metropolis For People strategy that was implemented by the city council of Copenhagen in 2009, and which my company, Gehl Architects, consulted on. It stated that it would make sure that Copenhagen becomes the best city for people in the world. Part of that strategy was focusing on having good public spaces that invite people to be outside as much as possible, because it’s important for the safety of the city and social inclusion and democracy. There’s a very strong element in the policy about drawing people out of their private spheres to spend more time interacting with their fellow citizens. We can’t sit behind screens at home and privatize everything. Throughout history, cities have always been a very important meeting place for people and that still is the case.

MB: You work as a consultant for several cities, including New York and Hobart, Tasmania. How do you tailor concepts and ideas implemented in Copenhagen and other northern European cities to different contexts abroad?

JG: That’s an easy one. All over the world, regardless of climate, of religion, of culture, we are all the same species. We are homo sapiens and we are made as a walking animal and have the same biological history. We have the same senses and we kiss the same way. So it’s really about making a good urban habitat for homo sapiens, and that’s no different in Tokyo than it is in a small village in China, or in Moscow, or Christchurch, or Hobart. In my book Cities for People, I point out that there are many more things that are similar than different between cultures, because we are all the same people. 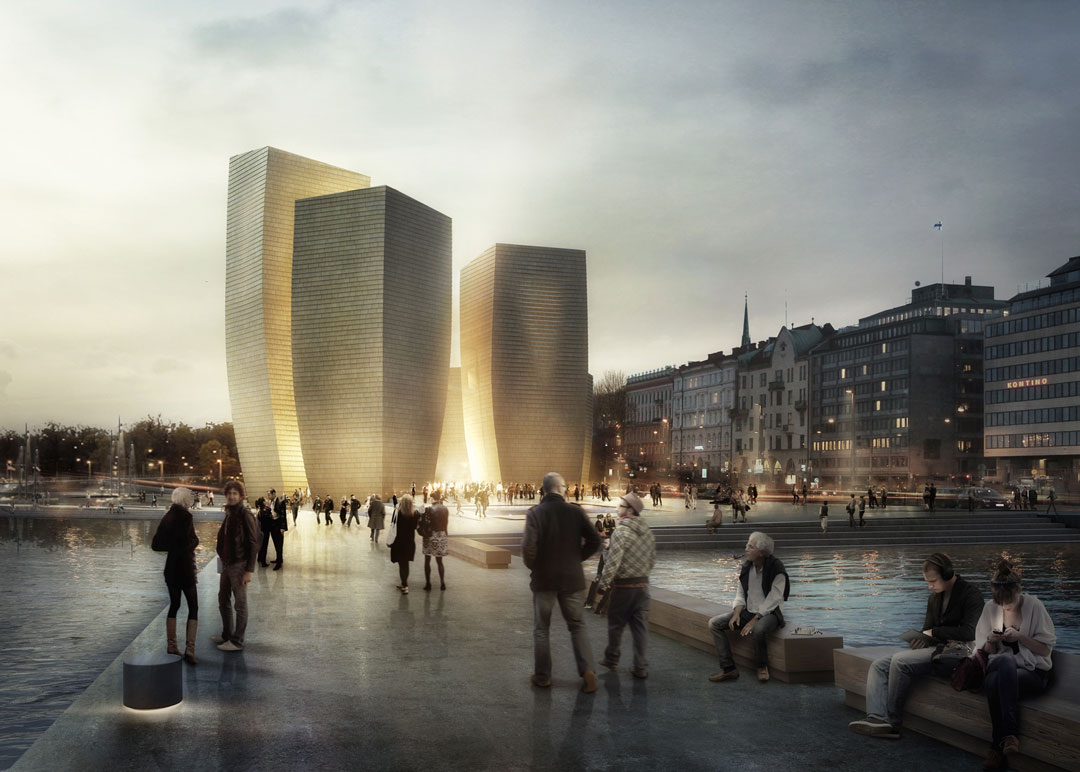 Gehl Architects consulted on Haas Cook Zemmrich Studio2050’s submission to the Guggenheim Helsinki Design Competition. The project, which featured five towers grouped around a central urban room, was among the six proposals shortlisted by the competition jury.

MB: Are there any public spaces that are good examples for cities to look at?

JG: In Siena in Tuscany, they have the Piazza del Campo, which is 700 years old. And out of all the criteria for having a good public space—I operate with a list of 12 criteria that I outline in Cities for People—the campo scores 12 points. That’s why it’s so famous and beloved and has been kept in operation for more than 700 years. When you talk about Siena, you talk about nothing but the campo because it’s so excellently made.

Another city I like very much is Venice because it was built for people and it has never been rebuilt to accommodate the automobile. So there you can still see people moving about and greeting each other. There are many more conversations in Venice than in any other city I know. To me, it’s a very human city where people are everywhere and the sound of people is everywhere—as opposed to Chicago, where the sound of automobiles is everywhere.

MB: Interesting that they are all very old places. Have we lost our way?

JG: It’s no secret that we have always built cities for people until cars started to invade our lives. So by studying old cities you can get a lot of inspiration for what would also be a good solution for today by looking at people more than we look at making the cars happy.

MB: Looking at your own career, you’ve paved the way for designers to become public figures involved in policymaking and urban consultancy. Why is it important for designers to fill these roles? Should we broaden our view of the design discipline?

JG: I have worked very hard to find out what the life is that goes on inside our buildings and how our buildings influence that life. In fact, I’ve spent most of my time studying life rather than buildings. And many of my architect colleagues said that I was wasting my time. But recently when I received two different gold medals for architecture, they had to redefine the category “architecture” so that it considered not only the form, but also how it was used and how life is supported by it. One of them was from the Royal Danish Academy of Fine Arts where they have a very strict definition of art, but then they decided to redefine it to also encompass what I was doing for mankind in my studies. That was a great moment for everybody because they started to lift their eyes away from form to the interaction between life and form. Because if you just do form, then you are doing sculpture, but if you look after the interaction between life and form, you are doing architecture.

I have a good friend, Richard Swett, who used to be a congressman and an architect in America. He also popped up in Copenhagen in the Clinton years as an American ambassador. He was very interested in the fact that so few architects were mayors or ministers or involved in politics or city councils—most of them were sitting in their ivory towers making sculptures. He wrote a book about it called Design Diplomacy that said, “for God’s sake you designers have all this creative power, so come out of your ivory towers and join society. Take responsibility for forming the future. Society needs you.” We actually had a conference in Copenhagen where we searched the world to find people who were both an architect and a mayor, or an architect and a minister, and find out how they have been succeeding. And there’s one very interesting example—the mayor of Curitiba in Brazil, Jaime Lerner, who was an architect and he has done wonders for the city. Curitiba is one of the South American cities that has by far done the best.

MB: As cities are increasingly densifying, are the lessons of Western and Northern Europe still relevant?

JG: Yes, because I see no signs that homo sapiens will not be homo sapiens in the future. I see this whole thing as something that’s gone on for thousands of years where we are trying to make a good urban habitat for homo sapiens. Whether we live in Greenland or in a very hot climate somewhere, we adapt and discover, but we all have the same aspirations. Even if we have to live in more density and give up driving cars, we will find that the most important thing—as it has always been in the past—is who we are and where we come from.