The celebrated Japanese designer muses on the similarities between design and soup making, the enduring relevance of “Super Normal”, and the power of observation. 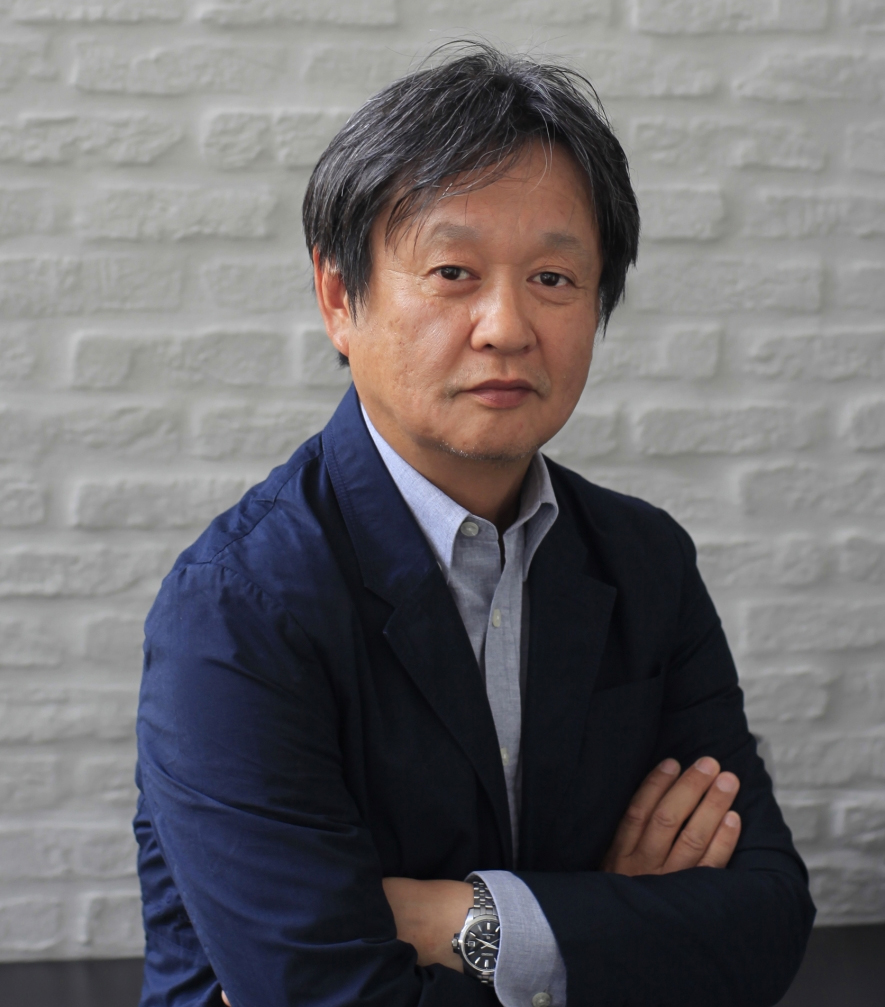 Naoto Fukasawa began his career at Seiko Epson in Japan designing wrist TVs and mini printers using microtechnology. He has been a product designer and advisory member of Muji since 2002.

Ever devoted to the notion of living simply, Naoto Fukasawa has applied his subtle design touch to a stable of everyday objects for Alessi, B&B Italia, Muji, Samsung, and others. On the eve of the launch of Muji’s new flagship on Fifth Avenue in New York, the Japanese designer sat down with Metropolis editor Mikki Brammer to discuss the art of observation, how his design process is akin to making soup, and whether the groundbreaking concept of “Super Normal” is still relevant.

Mikki Brammer: Was there a particular moment or object from your childhood that piqued your interest in design?

Naoto Fukasawa: I was quite a strange child. There were three things I wanted to become: a sculptor, a chef, and an artist. When I was about 10 years old, I saw my first Porsche. I didn’t know it was a Porsche, but I knew that it was a beautiful car. I knew what good design was, even then.

My father was an electrician, and our house was on the second floor of his company’s building. The ground floor, where his workshop was, had so many unfamiliar objects lying around. When I was a child, I’d play with all those strange things and make artistic objects out of them. There was so much gray electrical tape lying around, and I thought the shape of the rolls was really beautiful. I would try to pull it out and then roll it back up again the same way, but it was impossible to get the edges totally straight. That really influenced me as a designer.

MB: Your 2007 Super Normal exhibitions in London and Tokyo were very important at a time when design in general was more conspicuous and superficial. But a lot of design these days is far more pared down. Do you think your concept has become an accepted “norm,” for lack of a better word, in design?

NF: When we did the Super Normal exhibition, we were traveling the world and it made a strong impact on everyone. And it has influenced a lot of people in the design industry—people now are focusing on what is “normal” [free from superfluous details]. I think we gave them an opportunity to stop designing things that have too much decoration or are a big expression of the designers themselves. Instead it is about the product. People appreciate something useful and functional that’s not just an object for them to admire. 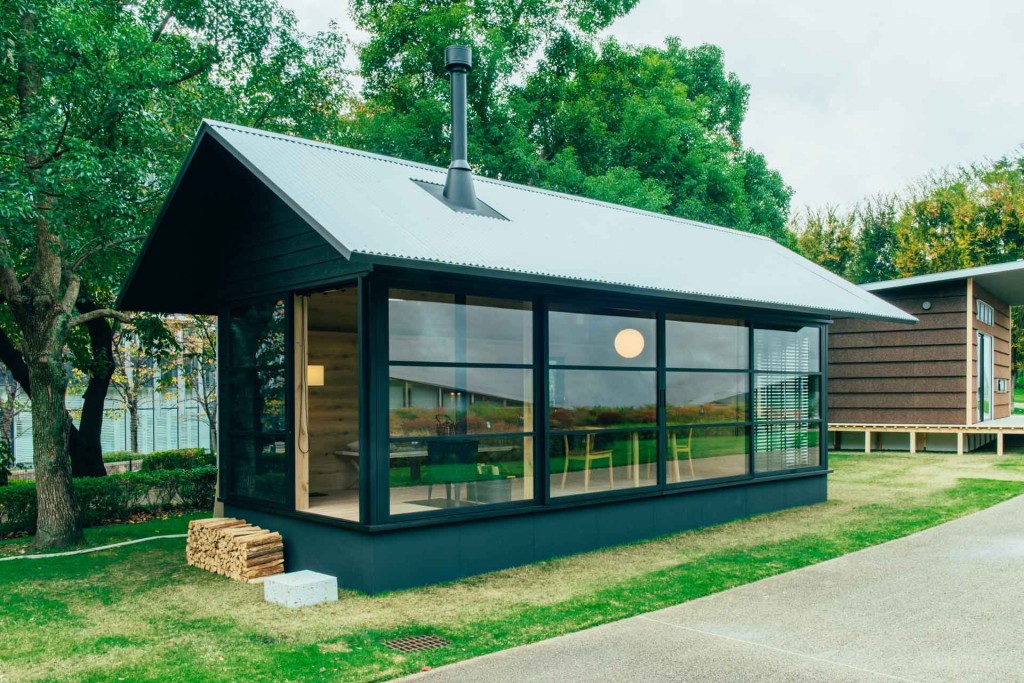 Fukasawa recently designed one of three prefab houses known as the Muji Huts, which premiered at Tokyo Midtown DESIGN TOUCH.

MB: Personal tech, such as phones and watches, has become the primary way consumers experience design. You started your career in that field. What was it like returning to it with the Infobar phone in 2003, and then with its later iterations, including this year’s redesign?

NF: Well, it’s obvious that the iPhone really changed the world. There used to be so many physical technological objects that existed in our living spaces, and we wanted to buy more and more of them. But now all we need is this small rectangle that’s kind of like a remote control for the world and every aspect of our lives. You don’t need all those different objects, and your living environment can be a lot cleaner, more minimalist, and rational.

To me, that is more important than the making of the physical object itself. When I designed the Infobar the first time, I focused more on the object. But this time I focused on the ambience and atmosphere I was creating. The design is more integrated now.

The opportunities to design products are shrinking. I used to design computers and monitors and lots of other gadgets, but no one asks me to do that anymore. And there are other types of products that I’m just not interested in designing. I used to design the computer monitor as a very big box, but now we only need a simple, thin screen—that’s enough. That’s why that kind of product design doesn’t exist anymore. But we still need nice tables and chairs, a nice plate to eat on, silverware, and a nice light. Even with lighting, you used to design the lamp, but what we really need to do is design the light itself. And if I wanted to design an air conditioner, I need to think of the quality of the air that I want to create and how we can control that invisible interface to communicate with each other. We need to participate with sound, and with air—those kinds of invisible things—and focus less on the actual making of things. 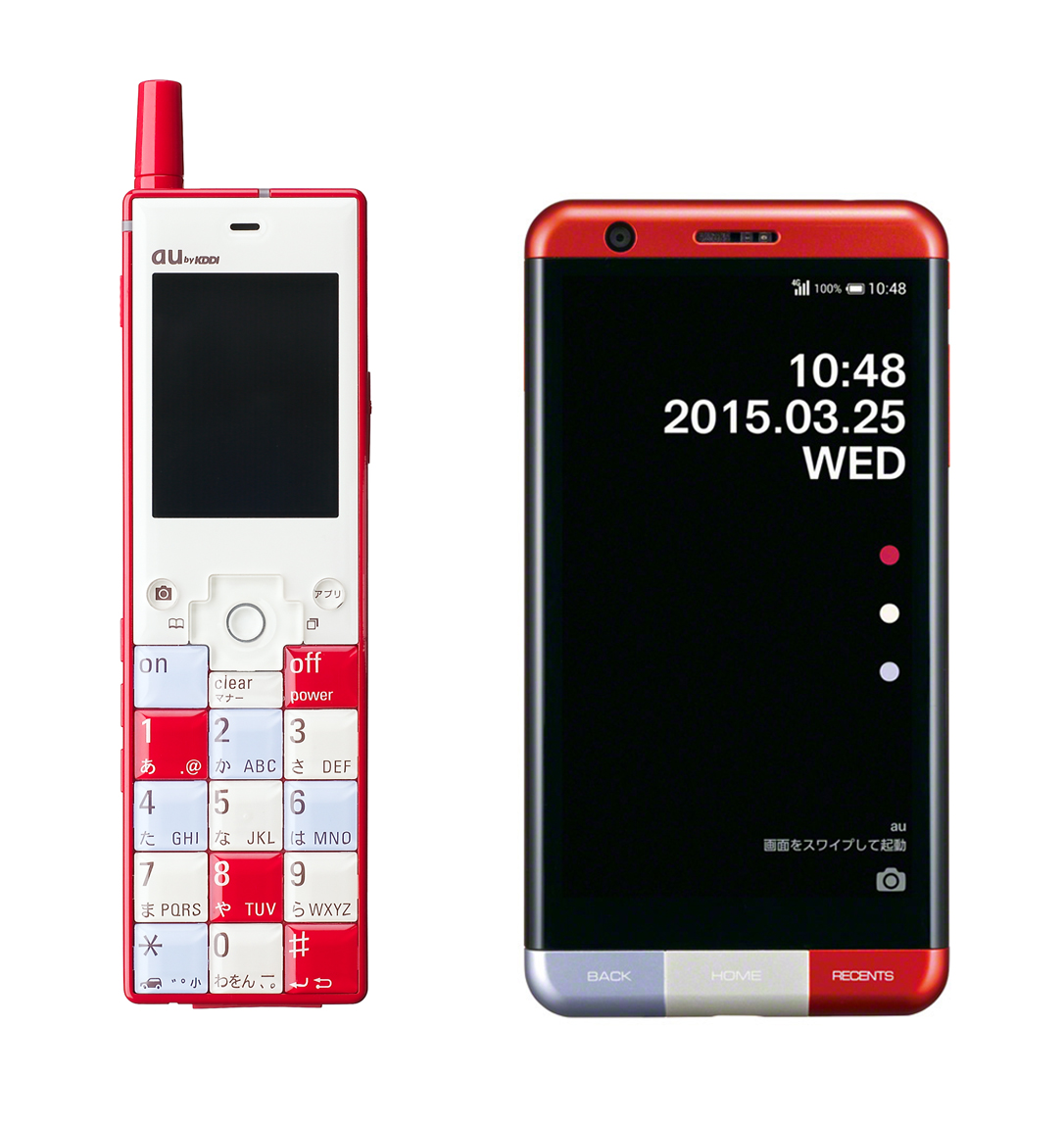 Fukasawa first designed the Infobar phone in 2003 (right). This year, he redesigned it for telecommunications company KDDI.

MB: You’ve mentioned that your approach to design changed drastically when you were 35, when you began to focus on the objective sketch. Was that when you discovered your true path, so to speak?

NF: Yes, it was then that I realized that we need to be more objective in the way we see ourselves—that I should be more aware of how I interact with my environment and with an object, otherwise I can’t design things. Once I observe other humans, I can understand myself and other people better, because we are all the same creature. But if I focus on just my own mind, I would have trouble designing the object—I need to focus on the core things that we share as humans.

MB: You’ve worked with Muji since 2002, and its products have evolved significantly in that time—how do you think the brand itself has changed?

NF: In that time, I’ve had the opportunity to tell people what Muji is and what we understand it to be. Muji is kind of like a computer-software company. We have a known big platform, based around having a lifestyle that is rich—but not in the money sense. That platform is like our operating system, a computer OS. Everyone at that life stage is ready to create something new based on that platform, kind of like designing an application. Muji is one big software platform and creates applications to complement it. We observe so much detail about this lifestyle and people’s behaviors so we can design new opportunities for interaction with products. There are so many micro considerations, and even I wonder sometimes why we focus on such small things. But what we really do is design support items that contribute to a happy life.

MB: You designed the sofa bench for Terminal 3 at Narita Airport, and traveling has been a big part of your life. Would you ever like to take on the redesign of an airport itself or other elements within it?

NF: Well, Muji is getting a lot of opportunities to do that kind of design. Narita needed to find the cheapest way to build a low-cost-carrier terminal, and so they asked Muji to design the furniture and bring a new lifestyle into the terminal. So I thought, instead of designing a sofa bench, I would design what we call in Japanese a “mattress with legs.” One of the reasons was that the LCC terminal operates 24 hours, and a lot of people come from local Japanese cities and stay in the terminal all night before they fly somewhere else. So a bench isn’t enough to sleep or relax on, but a mattress with four legs is. Those are the kinds of things we considered.

MB: Your approach to design is very Japanese in terms of its embrace of simplicity, but how has living in different cultures influenced your work—for example, switching between Japanese and Italian clients?

NF: It’s like I’m making a soup stock—what we call dashi in Japanese. And if I’m designing something for Muji, I don’t add flavoring like salt or other ingredients. It’s definitely the most subtle brand I work for, and it tries to minimize its specific flavor, its brand. But for clients in other countries, they want to express their brand more and so they add more of their own taste to the soup stock that I made. Some brands even ask me why I don’t make the flavor of their brand even stronger. But they all share the same basic qualities from the soup stock, and I’m the soup maker.

MB: Not only is the kettle very symbolic to tea-drinking cultures, it’s also something that brings comfort to a lot of people. Did this influence your design?

NF: When I’m designing this kind of kitchen appliance—a kettle or toaster or microwave or refrigerator—I take a measurement from the wall, which is straight, but then I also take a measurement from the human, which is a more organic form. So the kettle should be more tailored to the human body than the wall. But then the fridge should fit more to the wall. So I think about the positioning first. With the kettle, you need to use the handle to pour, so it should fit well in the hand. But a microwave, for example, should be farther away, closer to the wall. 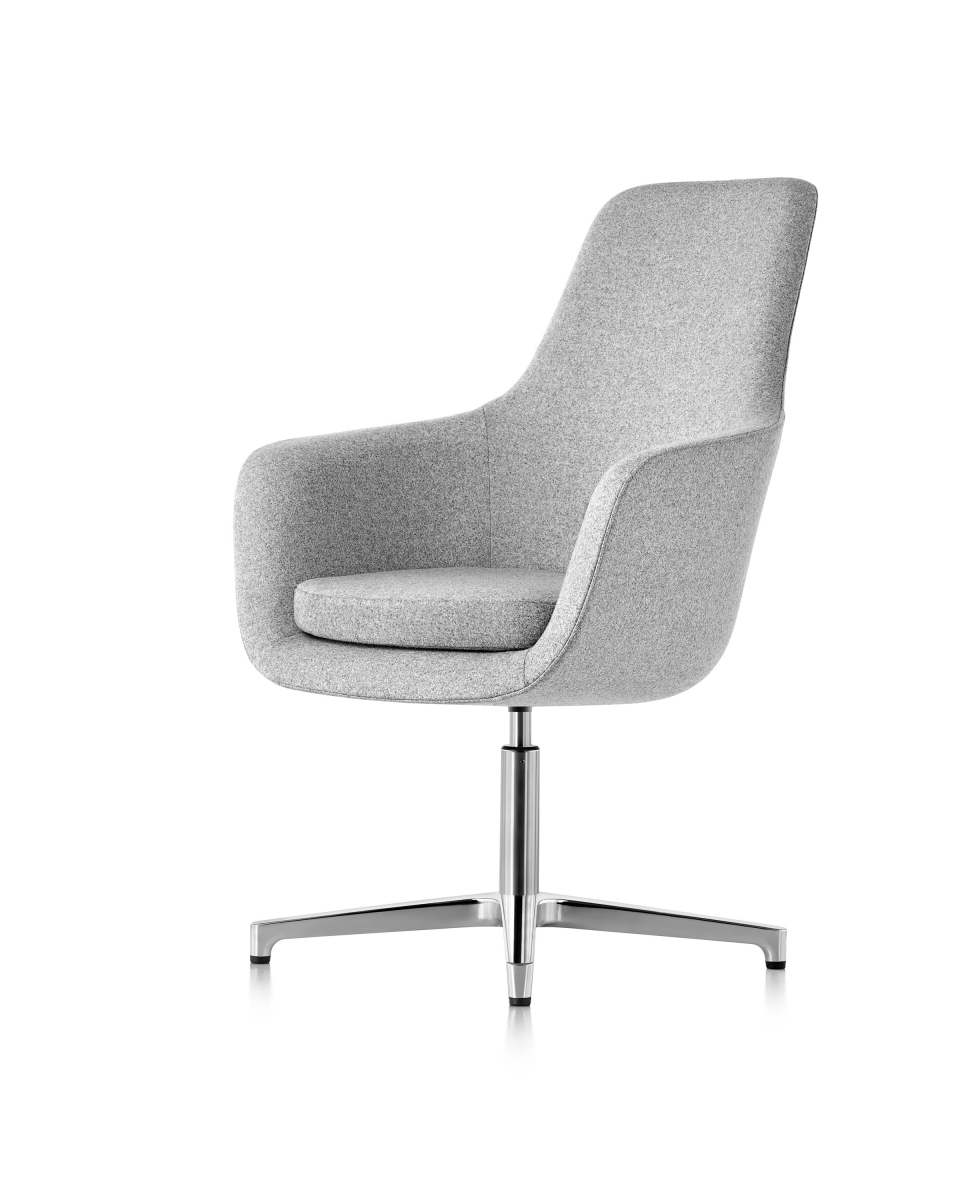 Fukasawa’s Saiba chair, designer for Geiger, is his first design for a North American manufacturer.

MB: You’ve been described as somebody who crafts relationships with objects, which, in regard to something as seemingly mundane as a toaster, may sound absurd to some. Can you explain your process in designing an object that has been reiterated so many times?

NF: I always go back to the methodology of thinking about designing things to be simple. There’s a little stand on the top of the rice cooker’s lid, for example, and at first you don’t know what it is. Then you use the spatula, and where do you put it when you’re finished? You don’t want to just put it on the counter. So then you realize that it rests on top of that little stand that looks like nothing. It’s an interesting functional icon that we at Muji refer to as “design dissolving in behavior,” and people soon realize that it’s a spatula holder, and that it’s distinct to the Muji rice cooker. It’s a functional aspect that expresses the Muji brand.

NF: It goes back to what I was saying about the stand on the rice cooker and using integrated behavior—not stopping a behavior, but rather completing it. It’s not easy to find those kinds of details in products. So I want to share with young designers the importance of observing the way the human body interacts with an object. And it’s that idea of “objective sketches”—seeing your own body from an objective stance. I think that’s an untouched zone that not many designers think about. Achille Castiglioni was a genius in that way. He would use the hand to find something interesting, and he wasn’t just a form maker.

MB: You must spend a lot of time observing and watching people. What’s something you’ve recently noticed that’s sparked an idea?

NF: To really observe, you can’t focus too much on anything. It’s more like my eye is touching the surface of the world. So even if I’m not thinking about it, I’m still engaging with it. My eye is constantly touching the environment that surrounds me and that’s part of my natural everyday life. Observing is who I am.