The student discusses her influences, her scholarly work, and what’s next .

At 28, Sara Zewde is something of an architectural wonderkid—part landscape architect, part urbanist, part sociologist and cultural anthropologist, and, as of this month, the Landscape Architecture Foundation’s 2014 Olmsted Scholar. As the first student from Harvard’s Graduate School of Design to win the award, Sara will bring her perspective examining and designing landscapes with Walter Hood/Hood Design in Oakland and Asakura Robinson in Houston to creating spaces in both New Orleans’ Treme and Rio de Janeiro’s Little Africa that honor and reflect some of those cities’ most challenged yet culturally influential communities.
Last month, I caught up with Sara to talk about her grant work, the relationship between cultural preservation and landscape design, and why Kanye West is important to the design community.

Rebecca Greenwald: Tell us a little bit about the two projects you’ll be using your grant to pursue in Rio and New Orleans.

Sara Zewde: A few years ago I was working in transportation planning in Rio de Janeiro when a discovery was made of slave bones in what they believed to be the old slave wharf, Valongo, in central Rio. At the time the city government announced that they wanted to memorialize the space with a plaza to represent the black experience in that community, Pequena Africa (Little Africa). With the support of a grant I received from Harvard, I examined the design process and issues in that community. The city government and community organizations advocating for the project were interested in getting me involved in the design process but had no funds at the time, so this Olmsted grant will help me go back and get involved in these design issues looking at this same neighborhood. 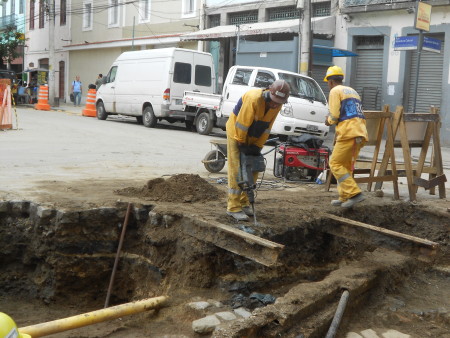 For the New Orleans part of my research, I’ll be revisiting a topic I explored in my master’s thesis at MIT, the potential removal of the Claiborne Expressway that cuts through one of the city’s most famous historically black neighborhoods, Treme. When I wrote my thesis, the project was theoretical, but then about a year afterwards, the city got a federal grant to study the feasibility of removing the elevated expressway. The Olmsted grant will give me the chance to go back and reconsider what I was talking about in my thesis and get involved in developing design strategies for the corridor as the project gets realized. 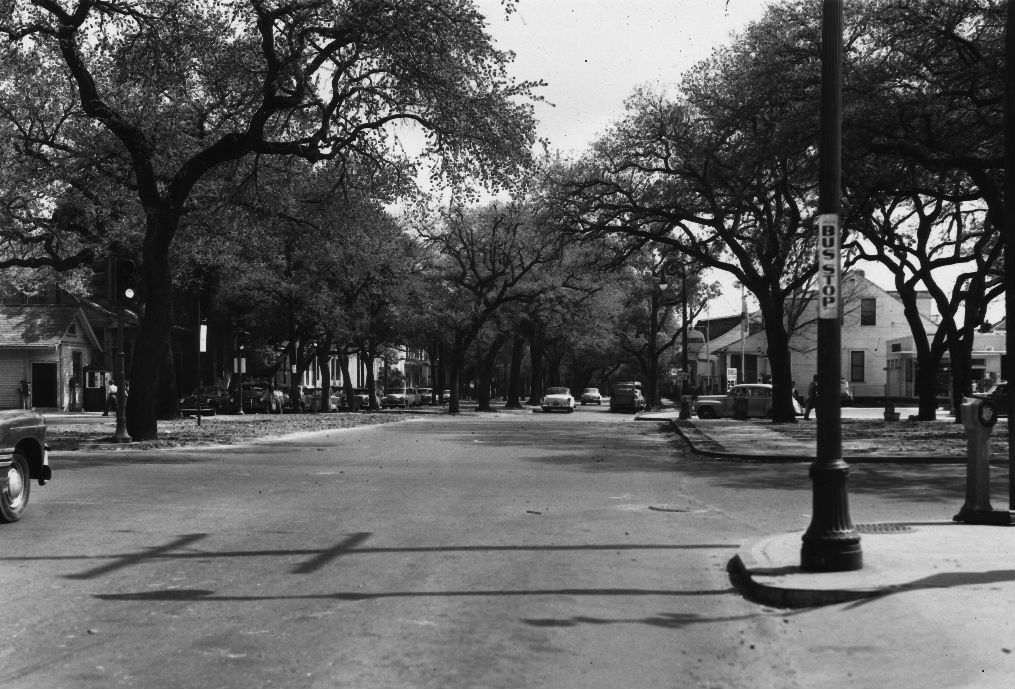 Claiborne Avenue, New Orleans, 1955, before the construction of the elevated expressway 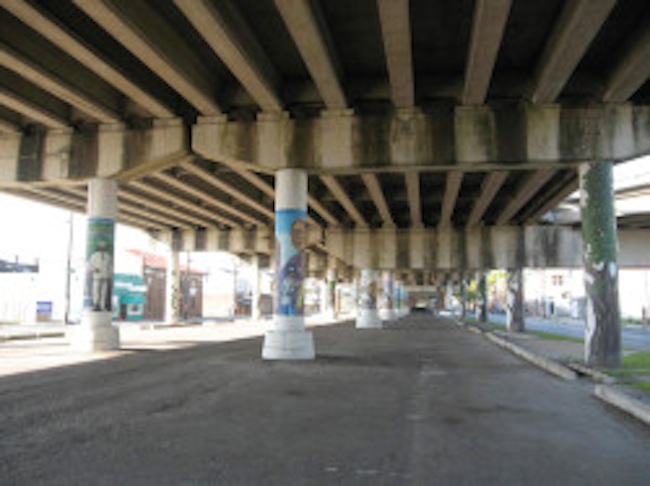 RG: What similarities do you see between the two communities, design and otherwise?

SZ: In terms of the trajectory of these cities, they’re both in a period of hyper development—New Orleans is still seeing a lot of post-Katrina redevelopment, and Rio is seeing a lot of World Cup and Olympics-related development. These construction works have the put the core of both cities under a lot of pressure. Because of this, areas that were historically under-valued, largely because of infrastructural decisions like putting freeways there, are now being redeveloped and reconsidered. In the case of Rio, the elevated freeway going through Pequena Africa was removed only very recently.

Both of these neighborhoods are also the homes of forms of music and culture that have formed national identities—in New Orleans Treme is the birthplace of jazz, and in Rio Pequena Africa is the birthplace of Samba. Despite that, there has been a lack of understanding of how the spatial cultures of those places are able to influence their contemporary design. That’s really where the intrigue for me lies- we can say we’ve been able to honor certain aspects of these neighborhoods, but in terms of architectural and landscape design we haven’t been able to.

RG: The thesis from your first Masters at MIT is now being used to teach students about black architecture and urbanism—an area that is not usually given critical examination, especially in academic settings. Can you detail some of the defining elements you see in this area?

SZ: For the most part, the way urbanists view black neighborhoods (and other low-income neighborhoods and communities of color) are as problems that need to be fixed. At the heart of what I want to say is what can we as urbanists learn from these neighborhoods? There are actually a lot of spatial and cultural practices that lend themselves to contemporary design. It’s not really about defining some set of physical elements that are characteristic of all of these places, but more about the way we look at them and value these people, landscapes, and neighborhoods. 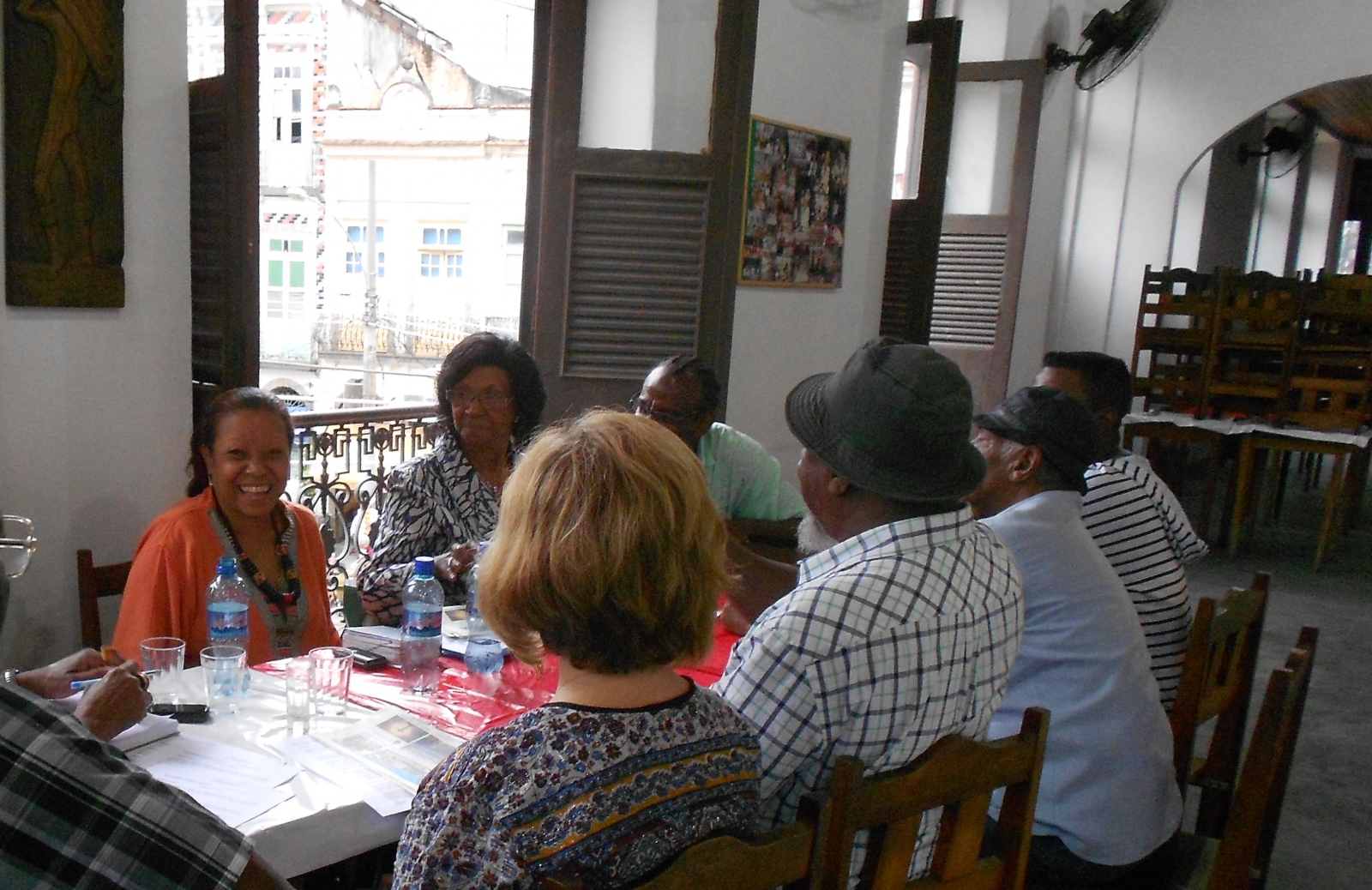 RG: For both projects, how much background research did you have to do on the history of both places? What are some of the most interesting things you learned in that process?

SZ: In both Rio and New Orleans the most important part of the research process was simply talking to people: small business owners, local residents, members of city government, and civic, cultural, and spiritual leaders. These conversations were about building relationships with the members of these communities and understanding what aspects of the spaces around them are most important. One of my favorite things about design is the empathy it requires of you.

As much as possible, spending time in the area is critical as well. It is important to experience the place with a sense of curiosity and wonderment, in combination with a rootedness, in order to tap into the rhythms and energies of the place. And you layer on the more historical, archival and current events research in understanding the issues and politics of the place. Those elements of the research are really important in understanding how to enter these projects and what my potential contribution might be to those contexts.

RG: How has your own diverse upbringing—both of your parents moved here from Ethiopia and you spent much of your childhood between Louisiana and Houston—represented itself in your work?

SZ: Every place I’ve lived has a very distinct landscape. Even as a child moving from Louisiana to Houston I became very conscious of the change in the way things looked, in the lighting, the smells, the pace of life, the sounds—all of that melded together into landscape. It happened again when I moved to Boston and again in California and in Brazil. For me it’s overlaying all of those moves with my parents’ upbringing in Ethiopia, I’ve always been very aware of what is represented in the landscape and how it makes you feel about where and who you are, where you’re supposed to be, what people, cultures, and ways of life are validated and represented, etc.

In terms of the work I’m currently pursuing, both Brazil and New Orleans exhibit elements of Africa in the Western Hemisphere. And my parents are both Africans in the West. So they present this extreme hybridity, and I guess because my own life is of a hybrid nature that’s one of the reasons why I’m drawn to both places. 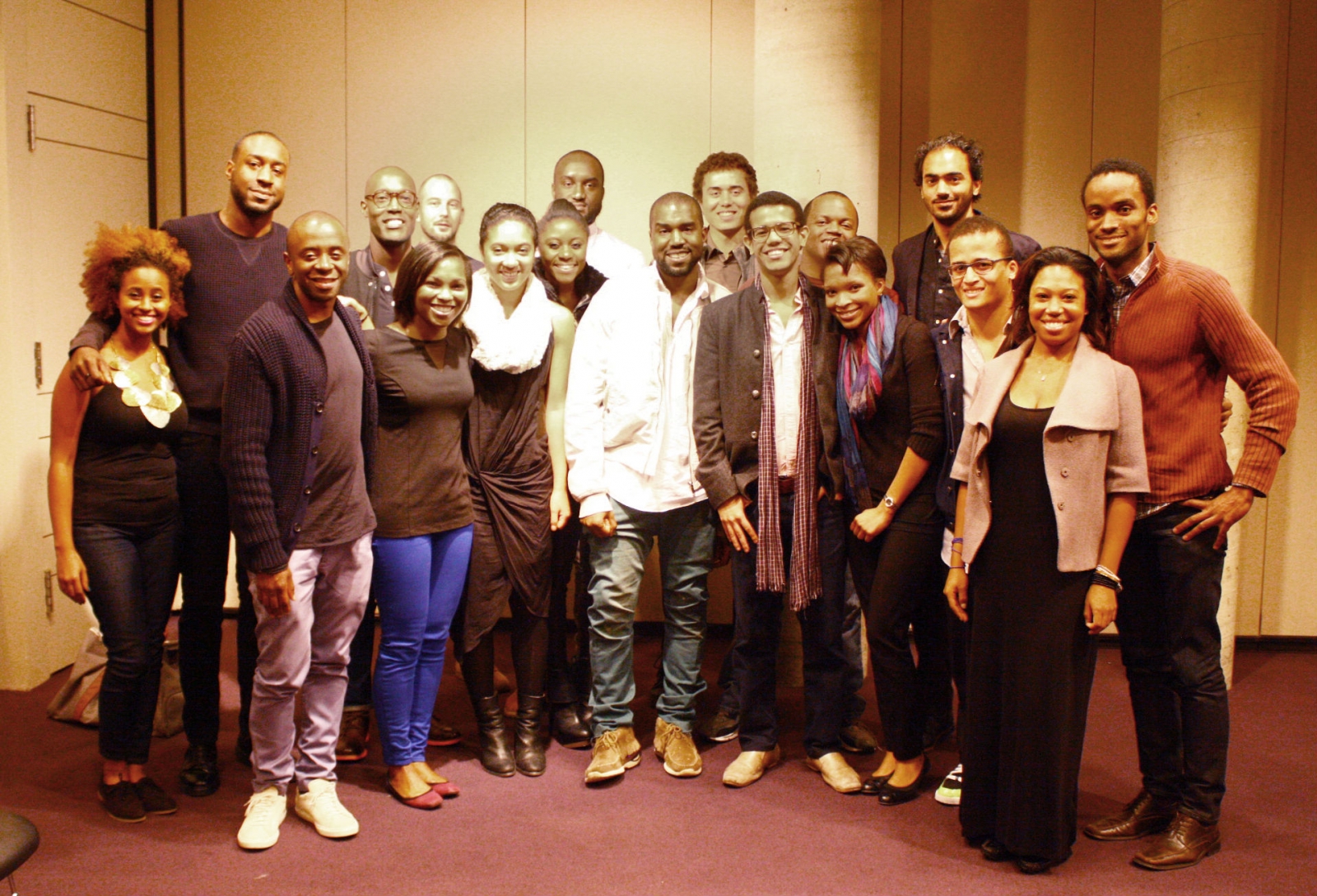 Kanye West poses with members of the African-American Student Union (AASU) at the Harvard Graduate School of Design (GSD).

RG: You were recently one of a group of students at Harvard’s Graduate School of Design who brought Kanye West in to speak and engage in conversation around design- what was the significance of that experience and what is the importance of figures like him in raising the profile of black designers?

SW: The reason why we reached out to Kanye was because we identified with the frustration he was expressing in the media about being pigeonholed into one form of art, and the feeling that he wasn’t gaining access to a lot of the design world because of this. The media didn’t seem to understand it, but we did. For us, with black people being so underrepresented in architecture, landscape architecture, and planning (for reference: only 2 percent of accredited architects in the AIA are black) we could certainly relate to that frustration. We want to be part of the design world and feel like we can make a unique contribution in the same way our peers can.

Having someone with Kanye’s reach and platform come to the GSD and express his thoughts on design as an agency of change and how design can save the world was very significant for us. For people of all colors and socioeconomic backgrounds to learn craft is highly empowering and will only continue to widen the range of things that are possible for design. Kanye spoke directly to that.

RG: I have to ask since you’re now an official Olmsted scholar—what influence has Olmsted had on your interest in landscape architecture and on your work?

SW: One of Olmsted’s greatest strengths was his ability to layer ecologic, aesthetic, and social aims. I think a lot of landscape architecture today either positions itself in one of two categories—it’s either a “public project” like an urban plaza or it’s an ecological restoration project aimed at saving habitat. But Olmsted’s work manages to do both really well, and he was very conscious of accomplishing both social needs and landscape aims. Olmsted was also very good at observing people and you can see that in the very delicate hand that comes through even in his large scale works—you feel like you could venture through Central or Prospect Park forever. It’s this layering effect that is so evocative and timeless and is something that can be appreciated even as populations change around them. And that is what I’m aiming to do with my work.

Rebecca Greenwald is an associate with Walter Communications and consults with companies across design, travel and sustainability. In her free time, Rebecca enjoys getting lost in new cities and in cafes, markets, bookstores and record shops.

This was originally posted on the Walter Communications blog.