The New Harlem East Merchants Association have plans to transform the dank space below the tracks of 125th Street and turn it into a catalyst for community health.

Unlike in the rest of New York City, in Harlem, people look each other in the eye. Good mornings and afternoons between strangers may be grunted, but they are still commonplace in this part of town. But stand in East Harlem at the corner of 125th Street and Park Avenue around 6pm, and you’re not likely to see a single pair of eyes.

It’s the spot where Metro North commuters come down from the raised train tracks and head back to their uptown apartments—headphones on, eyes to the ground, at high speed. The space below the station is a bricked plaza that suffers from a loud and active crowd of loiterers, strongly bolstered by several nearby methadone clinics and psychiatric wards (Harlem has the highest rate of psychiatric hospitalizations in Manhattan, according to a 2015 Community Health Profile from the city).

“You’ve got people moving through there that are waiting for trains, but they don’t go out because it’s scary out there,” says Kate Ascher, partner at Buro Happold and a professor at the Columbia Graduate School of Architecture, Planning and Preservation, where she teaches a class on transit-oriented development in East Harlem.

“People in this area know how to protect themselves and how to keep their heads down,” adds Carey King, a community organizer who has been tasked with taking on this troubled spot. King is Executive Director of the New Harlem East Merchants Association (NHEMA), whose mission is to “enrich the quality of life on the east side of 125th Street.” Mental health and addiction notwithstanding, NHEMA is attempting to reclaim the space, which has long been ceded to chaos, and in so doing improve the health of the surrounding neighborhood.

The noise of the train and the dank space below the tracks, most commonly used as parking, create an assault on the ears, eyes, and nose. Indeed, the viaduct itself is often blamed for the pervasive idea that Manhattan ends at 96th street. That’s where the Metro North train comes above ground and the Upper East Side turns, fairly abruptly, into Spanish Harlem—though gentrification is definitely hard at work in the low 100s.

The original station, along with the track, was first built in 1875 at ground level, but a low bridge restricted waterway traffic in the Harlem River so much that The War Department, which had jurisdiction over the waterways, mandated it be raised. The station we know and use today was designed by  Morgan O’Brien, the architect for the New York Central & Hudson River Railroad. Though there is some ironwork at the station entrance and on the platforms above, the space below is without frills; in 1897, when it opened, The New York Times reported that the exterior looked no better than a public restroom. 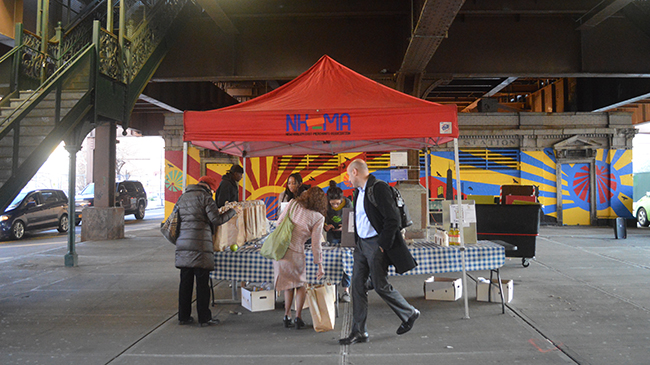 After customers balked at a traditional farmers market set-up in the malodorous plaza, organizers switched to a “fresh food bag” scheme: shoppers pay a flat fee for a bag with seasonal produce.

What Could Have Been

Back in 2012, there was a plan to revitalize the space surrounding the viaduct that received ecstatic support from both the Manhattan borough President Scott Stringer and Irwin Cohen, an original founder of Chelsea Market. It was also endorsed by a slew of local officials, government offices and business owners.

The plan was called “La Marqueta Mile,” named after the famous market and bakery under the tracks at 115th Street and Park Avenue. The plan was ambitious: arched vendor stalls, much like the ones at Fulton Market in South Street Seaport, would line the tracks on Park Avenue. One mile of retail stalls with new sidewalks and lighting would completely change the dynamics outside the train station.

Both Ascher and King say that more retailers would have gone far to keep the streets clean: in most areas of New York City, sidewalks are maintained by the residents and retailers in the immediate area. According to the 2007 Census, Harlem has only 42 retailers per 10,000 residents, compared to Washington Heights’ 49 and the Upper East side’s 132. With much of the area surrounding the viaduct vacant, it was largely untended before NHEMA came on the scene.

Unfortunately however, vocal support was not met with financing; when the heft of the infrastructure changes were determined too great, the momentum for the plan died this past spring. Moreover, a recent fire at a garden center under the tracks has made local officials question the safety of allowing any business to operate along Park Avenue. 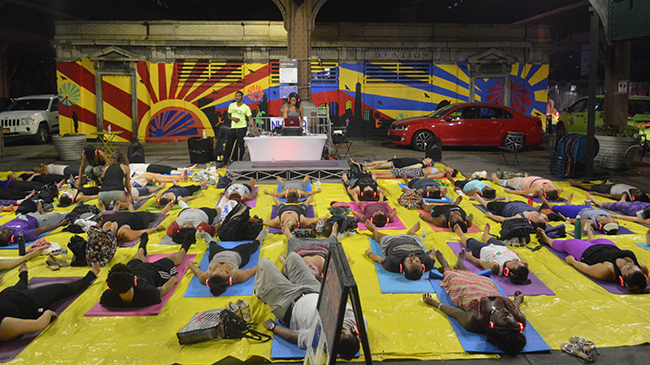 More than 30 people packed the plaza at 125th and Park Avenue for the first yoga class ever held there. Specially designed headphones allowed participants to hear music (and the instructor) over traffic.

Nevertheless, King and the New Harlem East Merchants Association (name soon to be changed to “Uptown Grand Central”) have plans for the space. This summer King has packed the plaza with healthy activities, such as zumba and yoga classes, live musical performances, a flower and plant stand, and a food truck with healthy items made by local vendors. A farmers market sells fresh produce one day a week (although King is working to expand that to five).

So far, the team has been able to get the area under the viaduct designated an official Department of Transportation (DoT) plaza, the main benefit of which is a dedicated sanitation worker.

“Baseline? It has to be clean, because you can’t do anything healthy when it smells like urine,” says King.

After the cleanliness issue, comes the issue of displacement. It’s difficult to deal with issues of addiction and mental illness in a public space; King is acutely aware of the way their efforts may be perceived as attempting to sweep the problem down the block: “It bothers me when people say that a farmers market is the first step toward gentrification.”

She’s worked with neighboring organization Picture the Homeless to find housing for 17 of the plaza’s regulars, but some still choose to spend their days below the tracks. She has spoken with elected officials about lengthening the route of the M35 bus, which originates on Randall’s Island, near four large homeless shelters, and tends to deposit large groups of homeless men at 125th Street and Lexington.

Stakeholders and onlookers agree that major changes to the structure itself would be the most effective way to drastically change the health of the space and maybe even the neighborhood, but Ascher is quick to add that space and design can only go so far.  “I don’t think it’s the spaces that take care of those problems. You can upgrade a place in a physical sense and that doesn’t make the problem go away. You need a coordinated approach.”