The Responsibility of Discarding Materials Belongs to Everyone

Rose Tourje, in a screenshot from the short documentary “ANEW: doing what’s right with what’s left.” In the inaugural post of our series on social sustainability, we featured John Peterson of Public Architecture, who had participated in a panel discussion titled “Sustainability Without Borders” at this year’s NeoCon. In this follow-up, we’ll focus on the […]

Rose Tourje, in a screenshot from the short documentary “ANEW: doing what’s right with what’s left.”

In the inaugural post of our series on social sustainability, we featured John Peterson of Public Architecture, who had participated in a panel discussion titled “Sustainability Without Borders” at this year’s NeoCon. In this follow-up, we’ll focus on the two other participants in that panel.

Rose Tourje is the founder and president of the nonprofit ANEW Foundation, whose catchphrase “doing what’s right with what’s left” sums up the organization’s sustainable mission. ANEW helps streamline the process of finding homes for used or surplus furniture, building materials, and office miscellany. By taking the cast-offs from office remodels or manufacturers’ discontinued product lines and placing them with organizations—mostly other nonprofits or public agencies—that need the materials but don’t have the budget to buy everything brand-new, ANEW helps reduce landfill waste and extends the life cycle of systems furniture that many companies treat as disposable.

ANEW and Change For Balance Productions have produced a succinct documentary about the challenges of demolition waste and their efforts to stem the tide. It includes the voices of clients who have benefited from the organization’s services, but, perhaps more tellingly, we also hear from leaders in the furniture industry who see ANEW as a new model for large-scale repurposing.

Tourje (and, by extension, ANEW) acted as the host of the “Sustainability Without Borders” panel, and her insights provided an important key to understanding a social form of sustainability. She believes that there aren’t really borders between the different agents of the design process—the manufacturer, the designer, the consumer. The responsibility of where materials go and how they’re used is, ultimately, everyone’s responsibility, but the complex processes of building and demolition often make it difficult to think holistically about a larger life cycle. ANEW’s work, then, helps distribute the load of that burden, by forging human connections between sources of supply and demand. 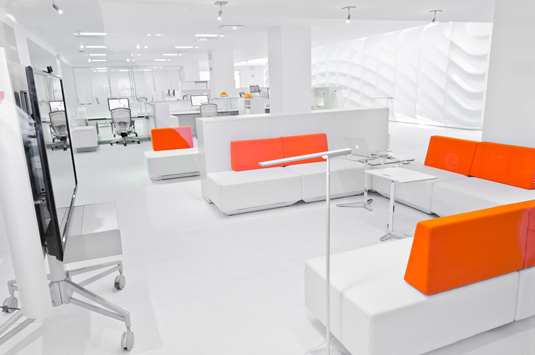 The third participant in the panel, Tracy Backus of Teknion, echoed ANEW’s focus on the life cycle of systems furniture. The company has had a sustainability policy in place since 2003, but Backus said Teknion is realizing that they have to start thinking about what happens to a product after it’s sold. The company now has a policy that stipulates every product that leaves their showroom will find a home, and they now try to think at least three years ahead about where unused or secondhand pieces will go. They’re even sponsors of Public Architecture’s The 1% pro bono program, which—in addition to being a nice bit of synergy on the NeoCon panel—makes clear the company’s commitment to social as well as environmental responsibility.

As with any form of change, progress is slow and hard-won for advocates of the decommission-not-demolition approach; as Tourje says, encouraging companies and public agencies to make such a big policy shift is “like climbing the Himalayas with no gear.” But the optimistic refrain that emerged from the panel discussion was a social one, centered on the value of people and organizations who help other people and organizations to do the right thing. ANEW is a smaller-scale corollary to John Peterson’s macro-level work with Public Architecture, connecting companies’ altruistic aspirations with the people and places that can benefit most from donated time and materials. But as the example of Teknion shows, these environmentally-responsible efforts also often make equally good business sense—which will lead, hopefully, to better traction and broader acceptance for a good idea.