Robotic Installation Wants to Make Every Consumer a Designer

In March, the Robochop was unveiled at CeBit 2015 international computer expo in Hanover, Germany.

The concept is deceptively straightforward: Turn anyone into a designer and let a robot do all the pesky manufacturing work. The latest project by Kram/Weisshaar, named Robochop, does exactly that using a simple online interface, four industrial robotic arms, and four hot-wire tools to carve crowd-sourced designs. The potential of such “end-to-end manufacturing,” as firm founder Reed Kram says, allows manufacturers to cut out the middle man and move “really quickly from a customer’s wishes to something they can have directly delivered.”

German IT company GFT Technologies AG commissioned the unique installation for its booth at the major European technology convention CeBit, asking that Kram and partner Clemens Weisshaar explore the blurring between the digital and the physical. The designers were no strangers to mixing computation and design in unconventional ways; their previous projects have implemented crowd-sourcing models, robotics, digital interfaces, and mass production. For example, their 2003 Breeding Tables used an algorithm to constantly produce unique 3D geometry that could be translated into sculptural steel table legs. The 2010 installation Outrace allowed anyone, anywhere, to digitally send text to eight robotic armatures in Trafalgar Square that would rapidly write it with LEDs against a nighttime sky. For more than ten years, the design studio dreamt of taking it a step further, to where “you have “robots dynamically creating objects, straight from design intention to manufactured things.” 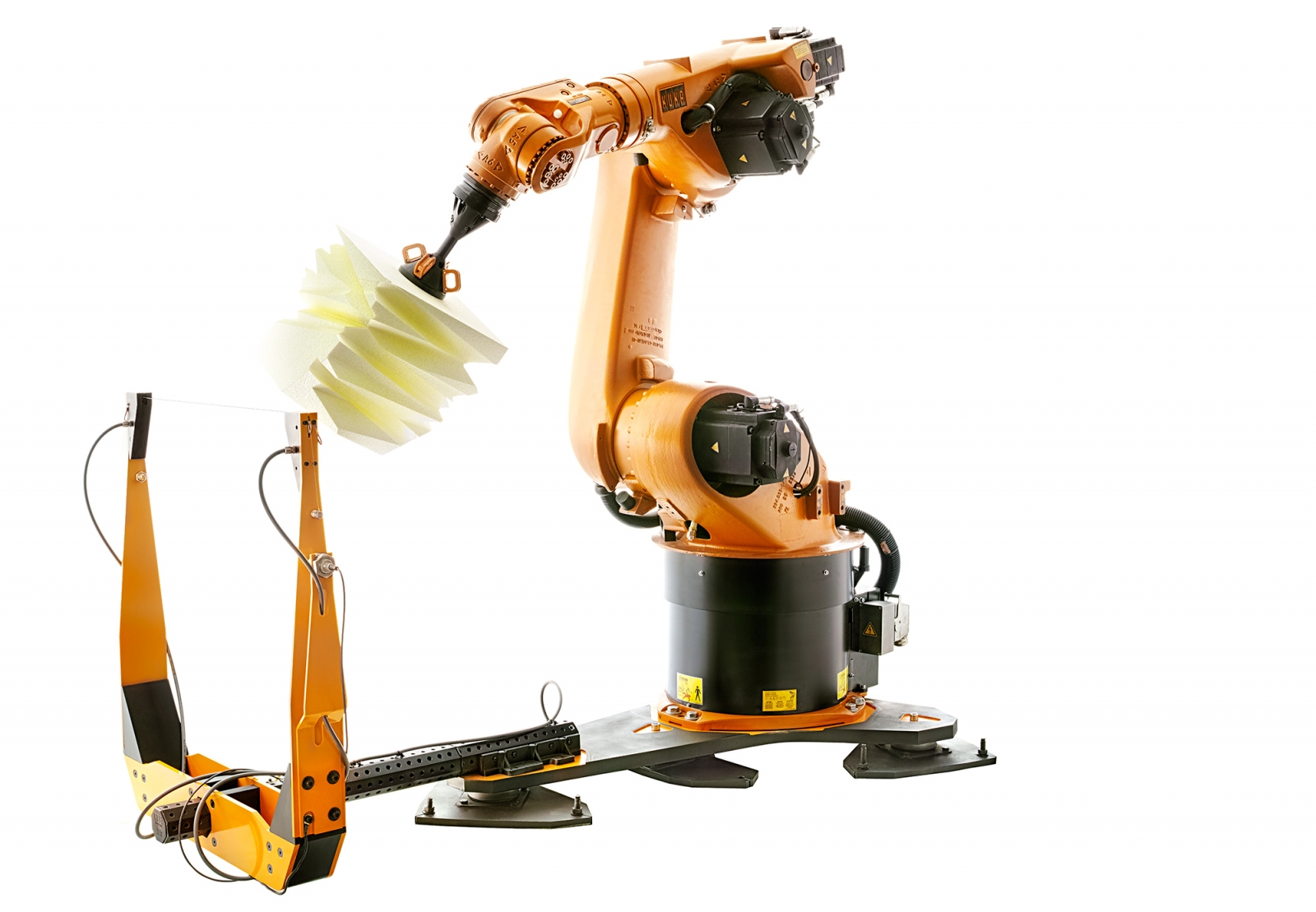 For optimal precision, the Robochop’s KUKA Model KR60 robot is fitted with a needle gripper that anchors the foam cubes. A hot-wire armature extends from the robot arm.

But despite their previous experiences, this project would present new hurdles. The first challenge was to design an interface where users without any technical or design background could easily sculpt objects, in this case, 15.75-inch cubes of durable foam. The final interface is breathtakingly simple, allowing users to rotate the cubes in space and draw curves or straight lines that, when prompted, subtract the outlined volumes from them. The second challenge was the robots themselves. “In a traditional factory line,” explains Kram, “one of the robot’s programmers will work for a couple months on a single movement that the robot uses for its lifetime.” A robot that executes an infinite range of possibilities was a “cutting-edge” and “extremely intense” proposition for any engineer of robotic software. The designers purchased their own robot, installed it in their studio, and put themselves through a crash course in robotics. The duo came out of the experience energized and determined to keep up with the rapid pace of software innovation, even as manufacturers and architects lag behind. “Conversations that say ‘designers need to speak to engineers’ are absolutely useless,” says Kram, whose practice went as far as to receive additional robotics training from a German car factory designer.

The end result was a “blockbuster” success at the IT convention, which took place in Hannover, Germany, in March. In the span of four days, Robochop produced more than 2,000 unique, crowd-sourced foam blocks. Could the demonstration have opened up a window into the future of manufacturing? Kram senses outcomes will vary for different industries and actors, while casually downplaying the project’s more ambitious claims. “It’s just a will to explore areas that are of interest, to try to understand them through actually making them.” 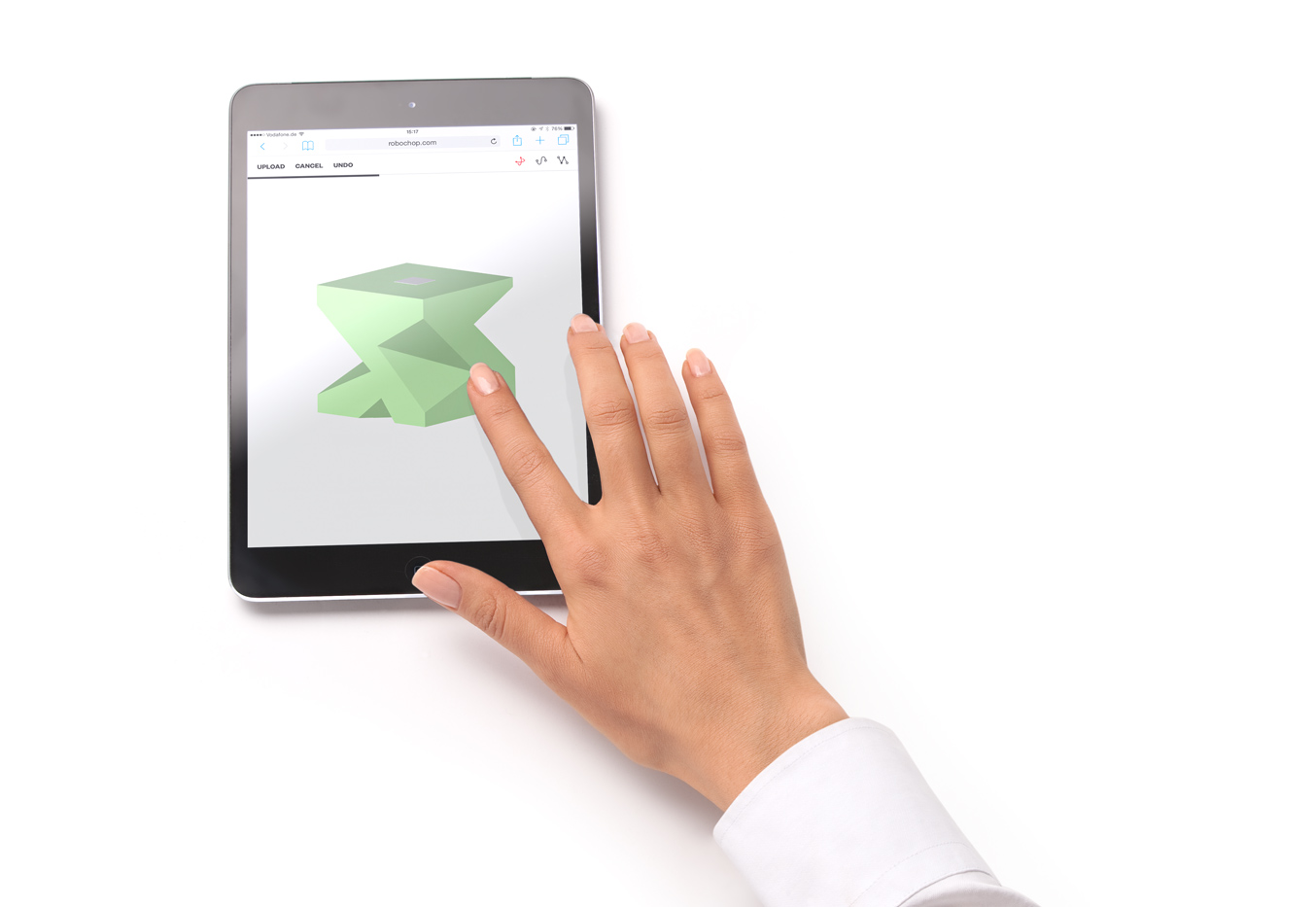 The interface Kram and Weisshaar developed for the installation is dead simple, letting users intuitively “sculpt” object with the touch and swipe of a finger.