The next stop for the Bruner Foundation team on their tour of site visits was in Greenville, South Carolina, where a forgotten 40-foot tall waterfall was transformed into an urban oasis and centerpiece for the city.

After visiting Uptown District in Cleveland, the Bruner Foundation team headed south to Greenville, South Carolina, for the last of our site visits to the five 2015 Rudy Bruner Award for Urban Excellence finalists. 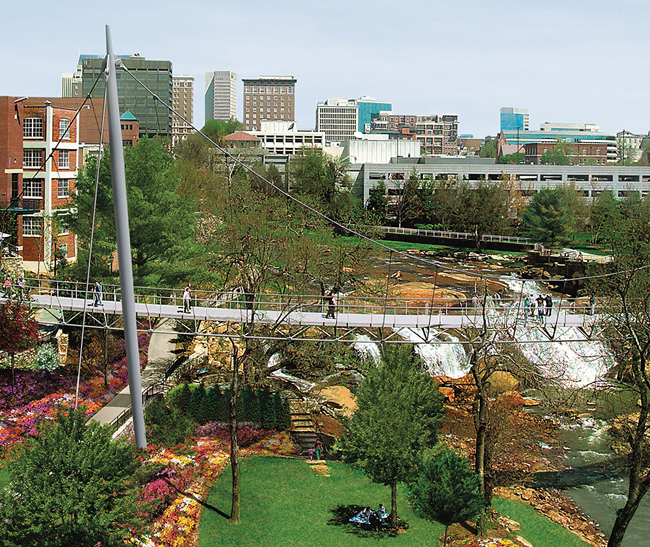 Falls Park on the Reedy in Greenville, SC.

Located in the center of downtown Greenville, South Carolina, in the foothills of the Blue Ridge Mountains, Falls Park on the Reedy is an urban oasis and centerpiece for the city— thanks to the transformation of a forgotten 40-foot tall waterfall and overgrown river valley.

The park, completed in 2004, is the realization of a vision that began with a 1907 “Beautifying and Improving Greenville, South Carolina” report sponsored by the local municipal league that identified the river falls and gorge as “the most distinctive feature in the topography and landscape of Greenville.” Liberating the falls and creating a park was advanced by the Carolina Foothills Garden Club, which led an effort to establish the park beginning in 1967 and engaged Washington DC-based landscape architect Andrea Mains in 1987 to complete a master plan.

A new pedestrian bridge replaces a four lane vehicular one that covered the falls.

Development of the 26-acre park included replacing a four-lane vehicular bridge built directly over the falls with an elegant, curving, pedestrian suspension bridge designed by Boston-based Rosales+Partners. The award-winning bridge appears to float above the river, offering a dramatic overlook of the falls, and it has become a signature of the park and city. A series of stone steps, gently sloping ADA accessible ramps, and an elevator provide connections between the city’s Main Street and the river valley 65 feet below. 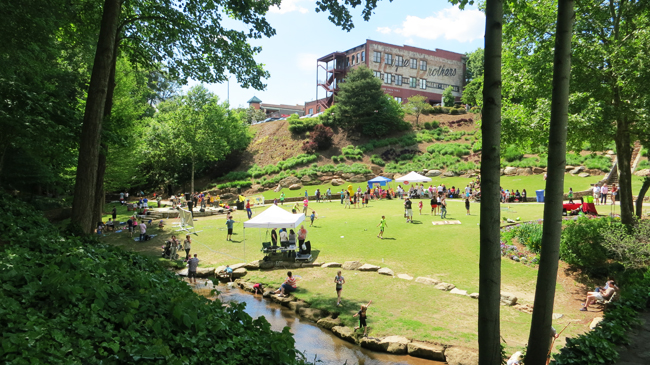 The park offers a series of sweeping vistas and winding trails interspersed with manicured greens and wooded valleys that connect the city with the river and support a diversity of activities such as walking and cycling, quiet contemplation, and picnics, as well as large events like the annual Reedy River Duck Derby. Plantings include a mix of mature trees and native plants, supplemented with vibrant annuals that provide splashes of color at key areas. 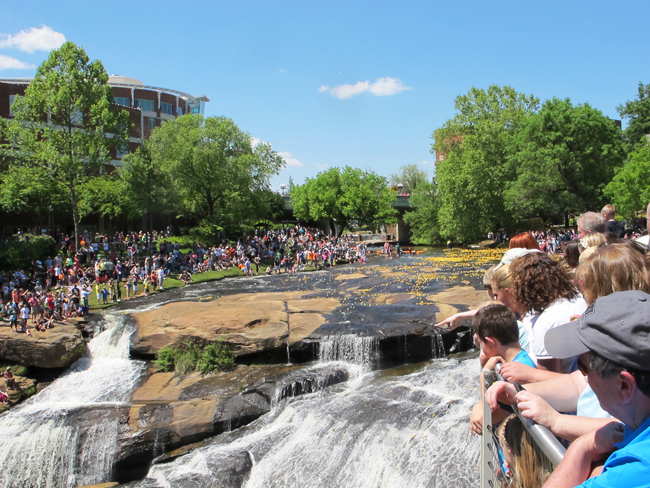 Falls Park was completed under the leadership of Mayor Knox White with public funding, largely comprised of proceeds from the city’s hospitality tax. The $13.5 million investment has yielded impressive economic and social returns. The park has influenced nearly $600 million in development, including $65 million in new waterside hotels, housing, offices, and retail at RiverPlace. It is part of a growing network of green spaces including the 17-mile Swamp Rabbit Trail that links downtown with nearby parks, neighborhoods and public amenities. 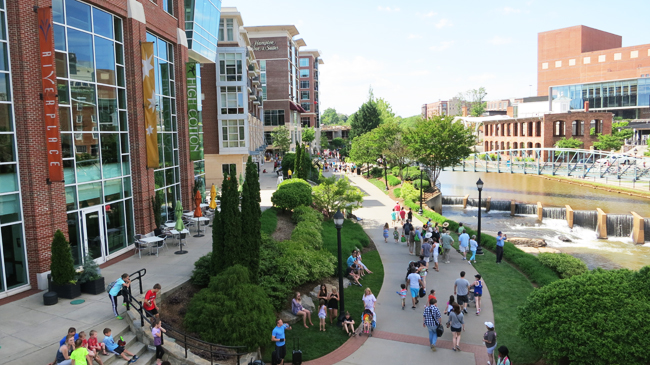 More than anything, the park has created a popular outdoor “living room” in the heart of downtown that attracts a wide spectrum of the population and has become closely associated with the city’s civic identity. According to White: “The park raised the bar for the community’s self-identity and sense of pride.”

Next, we head to Little Rock, Arkansas, where the selection committee will determine the 2015 Rudy Bruner Award for Urban Excellence medalists.