In “Source Material,” Architects and Designers Share Their Most Treasured Keepsakes

Seven architects and designers share their most treasured keepsakes. 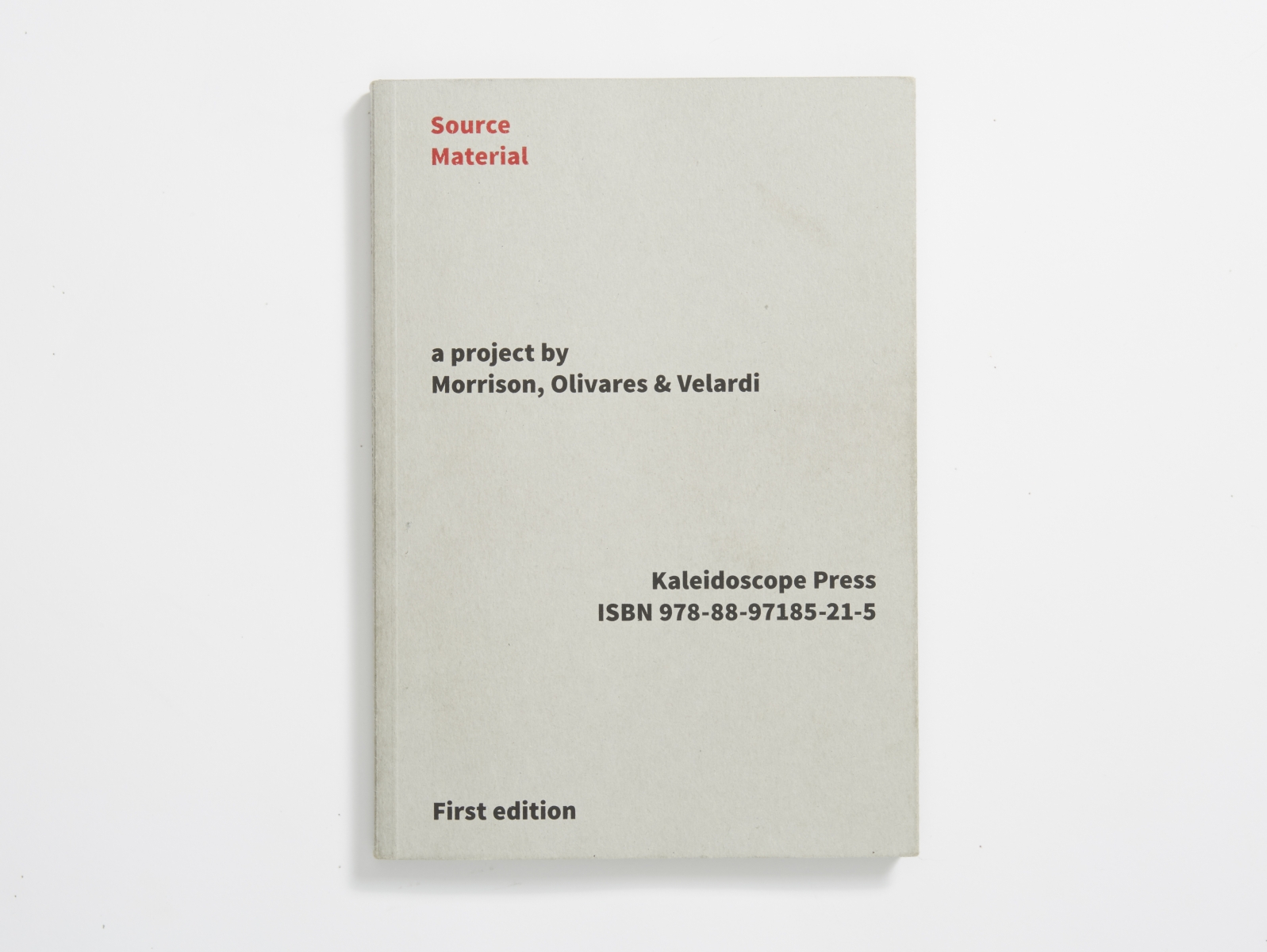 Source Material will be on display at the Vitra Design Museum through February 8, 2015

Le Corbusier called them objets à réaction poétique. They were, specifically, the pine cones, the coiled sea shells, slick stones, and chipped crab carapaces that the architect collected on walks along the beach. These idiosyncratic keepsakes, he wrote, were not only specimens to inspire new ideas and forms, but bore actual evidence of the cosmic laws that tied physical reality together.

Curators Jonathan Olivares, Marco Velardi, and Jasper Morrison prefer to leave the universe out of it. “Our material world is made of a succession of layers,” write the three designers in the introduction Source Material—a joint exhibition and book launched at a satellite event at this year’s Milan Design Week, and currently on display at the Vitra Design Museum. Still, their focus is yet more granular, dwelling on the interrelationship between people and the things stay with them.

The team asked several dozen designers, architects, and other creative professionals to select their most endearing knickknacks and curios. Ranging from a slab of bark to a roll of silver tape, the objects are given the Magrittian treatment—shot against a blank backdrop, thoughtfully framed, and all but lacking an ironic French tagline. Instead, they are accompanied by short snippets of text (written by the designers themselves) that offer a glimpse into the object-world of these creative individuals. 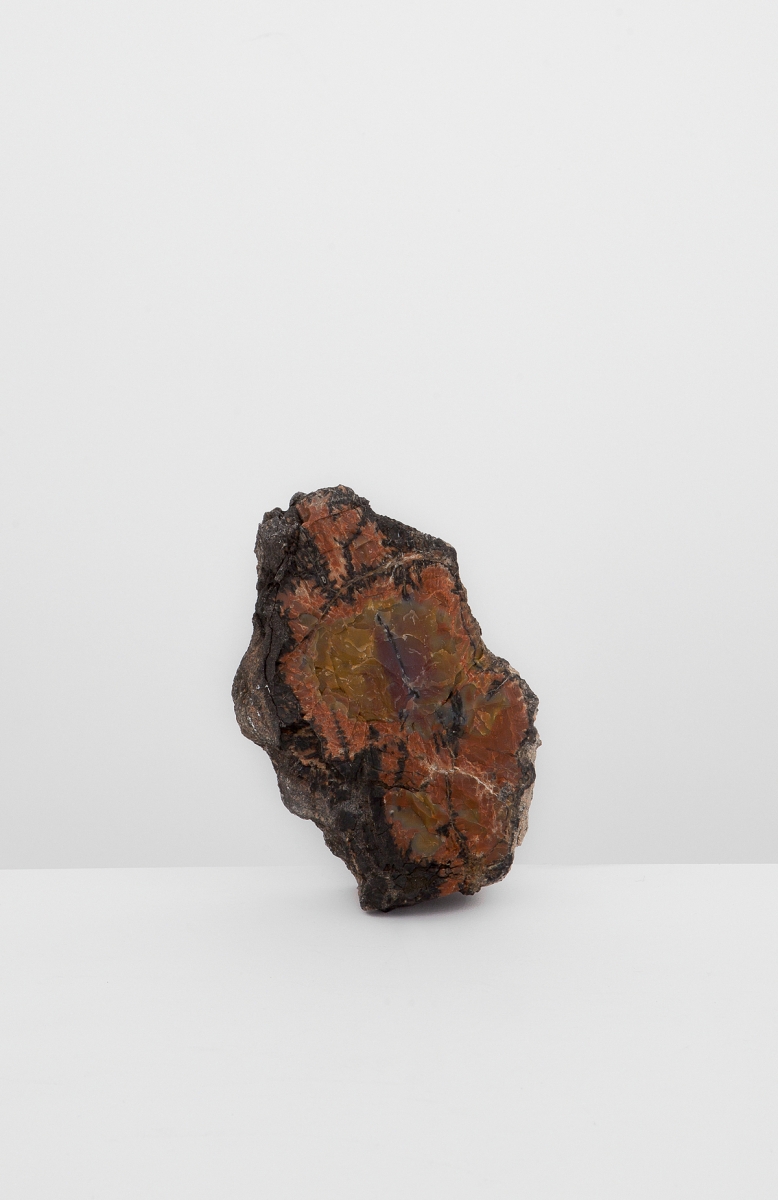 This is a piece of petrified wood from Arizona. My life partner, Max Schneider, gave it to me while I was working on my thesis in grad school. At that time, I was doing a lot of research on how modernist facades in their apparent neutrality are capable of expressing social values or desires, even when there is not a single obvious symbolic component in sight. This object embodied very accurately what I was trying to express in terms of the relationship between social practice and architectural form. Patterns found in materials such as wood or certain types of stone are informed by their own formation and the conditions under which this process took place. In a similar fashion, the architectural object develops via deposition and erosion, by inhabitation, appropriation, exchange, and agency.

Patterns found in materials such as wood or certain types of stone are informed by their own formation.
In that sense, if form follows function, it was crucial for me to understand that function is never static, definite, or predictable. Form is an index of genesis, and therefore architecture is always an open question, an inquiry into what is, what might be, and how the latter will happen. Architecture is both the crystallization of a specific historical and social moment, and a reflection on the imaginary status of a future object. These ideas had been sitting in the back of my head for a very long time, shapeless, like a cloud, until I received this wonderful gift that explained them all. 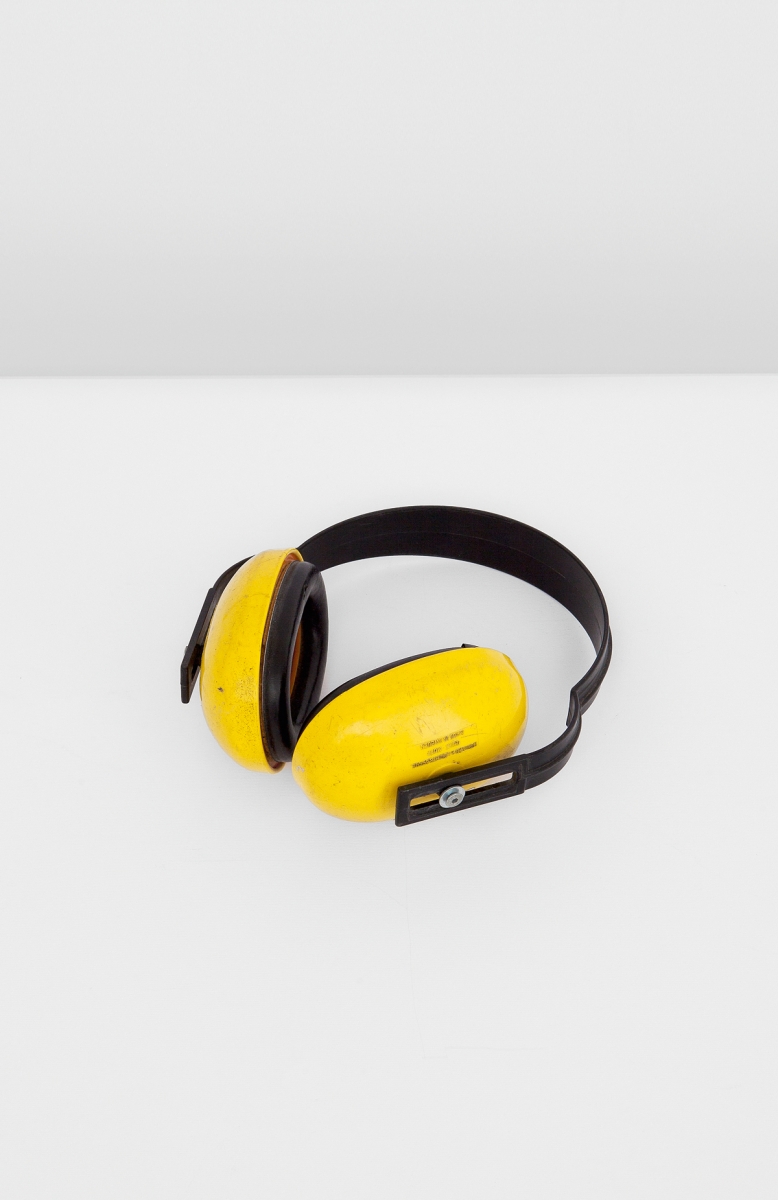 What this is? A pair of earmuffs, the kind for keeping noise out. The Brits call them quiet muffs. Funny phrase. I bought them when I first started my apprenticeship as a cabinetmaker in Dorset, southwest England, in 1985. In other words, they go back to the very beginning, to when I started making furniture 30 years ago.

Putting these muffs on was what it must be like for a race-car driver to put the visor down.
At the time, I was wearing them almost every day, working on the circular saw or my Elu Mof 96 router. I have had to fix them once—the connections between the ear cups and the black plastic brace had broken off. There are two zinc plated screws now.

Putting these muffs on was what it must be like for a race-car driver to put the visor down. It put me in action mode, instantly. I haven’t been wearing them much recently. I simply don’t get to make things anymore. So sad. Still, I have kept them all these years, just in case. When the time comes, I can put them back on and it will feel like it always did: “Gentlemen, start your engines!” 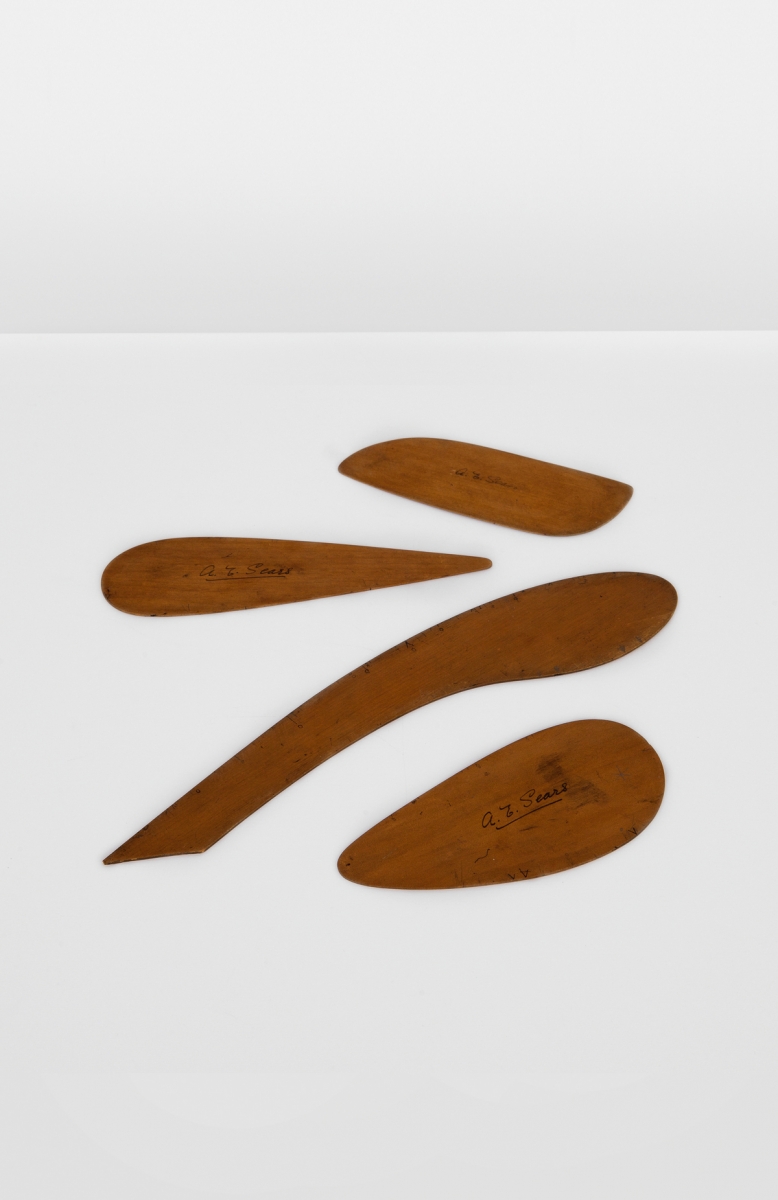 I’ve always called them French curves and, though I don’t remember how I came to have them, it could be that they belonged to my grandfather. They are probably more correctly called ship’s curves, as they were most often used to achieve the lines needed to build boats. When I began working as a designer, I used them to draw nonradial curves for projects, such as a door handle I designed for FSB in 1989. The arrow marks and zeros you can see on some of them were made by me while drawing segments of longer curves.

If form follows function, it was crucial for me to understand that function is never static.
Nowadays, computer-drawing programs are equipped with everything you need to achieve a smooth and precise curve, but the feeling you get when creating them is a detached one compared with the physical sensation of running your pen along a well-curved plane of wood. It’s no exaggeration to say that these shapes helped form my sense of line and appreciation of shape itself. Someone else made them, but in doing so they passed on something far more important than a tool for drawing curves. 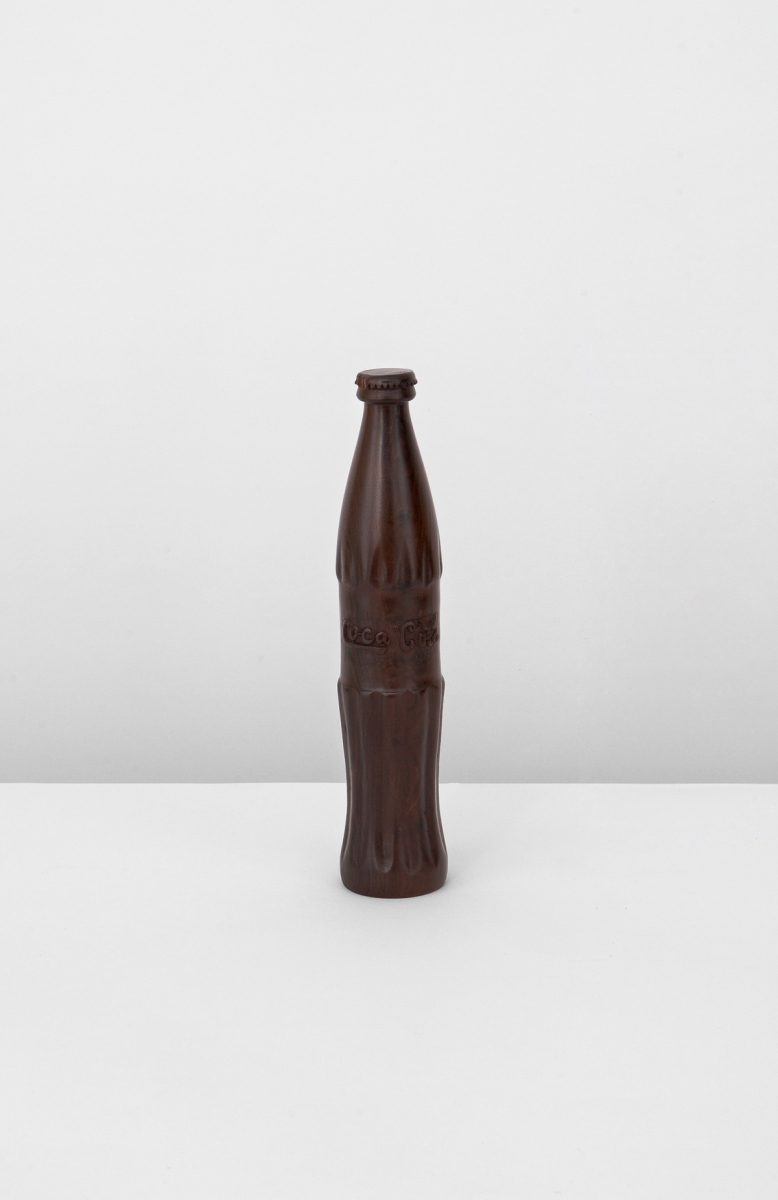 This bottle was found on Zanzibar Island in Tanzania, while we were looking for a gift to bring home. You’d think it was made of ebony, as the surface is really dark, almost black. In reality, it is rosewood colored with shoe polish—it’s the latter that gives the bottle this ultra shiny, almost plastic surface. We were intrigued by the technical skills of local wood carvers, which go beyond what you can find nowadays in Europe. We’ve researched this a lot, actually, but in Europe even the traditional carvers of holy statues or cribs are limited in their ability to extend their repertoire beyond their usual objects and scales.

We were intrigued by the technical skills of local wood carvers, which go beyond what you can find nowadays in Europe
The wooden jewelry that was made later on for our own label, BLESS, by the Tanzanian carpenters was technically mind-blowing, as the little chain links were all carved from one piece, yet remained fully flexible like a real chain. As a nice side effect, they kept producing our designs to sell to tourists from their own market stands, so, in that sense, we managed to widen their product range. 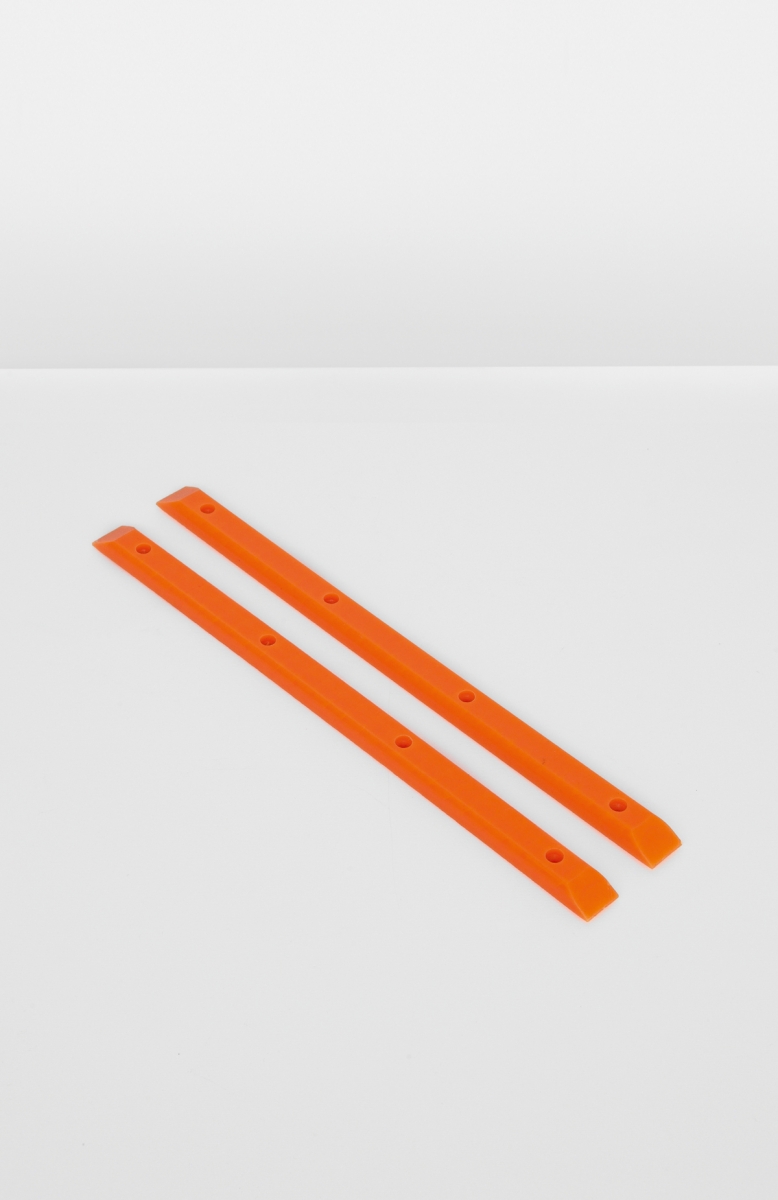 This pair of 1980s skateboard rails, made from milled nylon, was designed to be screwed to the underside of a skateboard to protect the graphic under the board and allow the board to slide smoothly on curbs, railings, and ramp coping. These plastic rails are some of the first things I can remember assembling as a young boy, along with the rest of the skateboard, using a screwdriver and ratchet.

Years later, I would remember these plastic skateboard rails when working on the stacking bumpers for my aluminum chair. We adapted them to protect the chair from the abuses of stacking life, and created the first stacking rails. 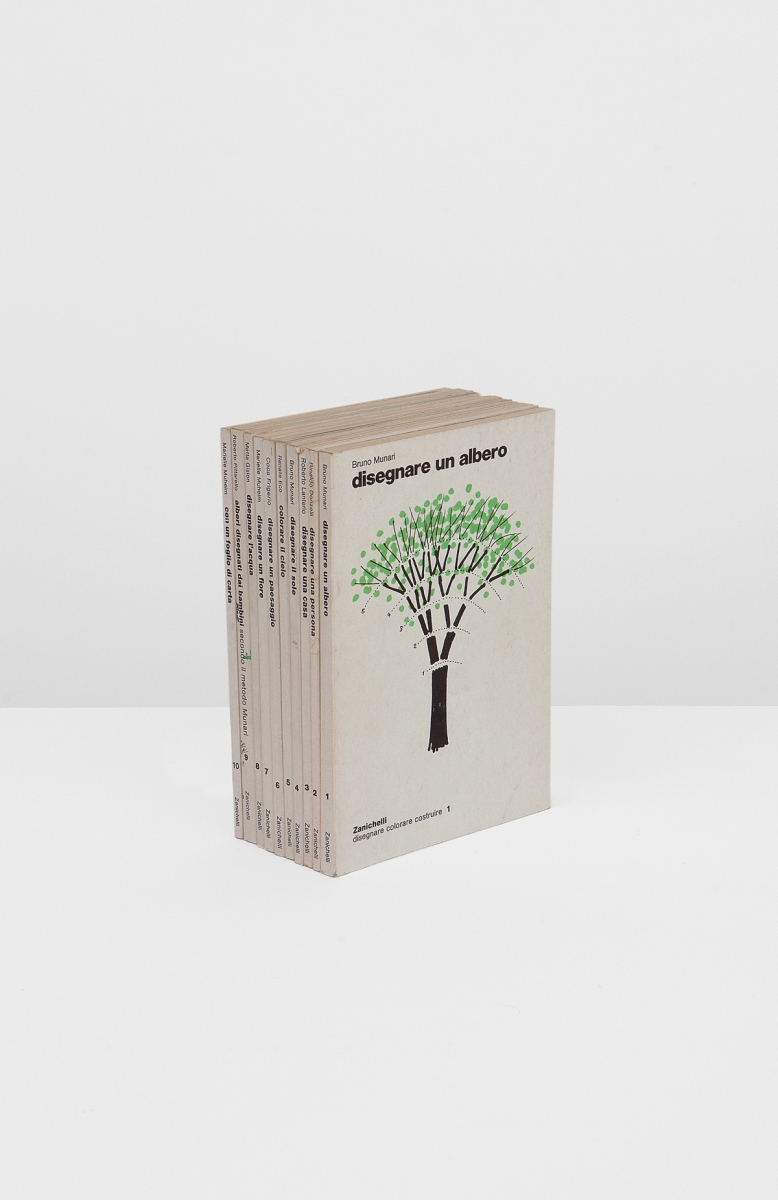 I don’t remember the exact moment when I fully realized this collection of ten books would be with me for the rest of my life, but I must have been in my early twenties, just after finishing my studies, when I had just moved back home from England. After four years of living on my own abroad, I had accumulated so many books and magazines. Making boxes to send back home, I really understood how much printed matter meant to me, and since then I have not been able to imagine living without it.

The book series Disegnare Colorare Costruire was amongst them. I guess I must have been five or six years old when my dad bought it for me, probably thinking it would help me develop my own creativity. I have actually never been that gifted at drawing, but when I held these books in my hands after returning from England, I remembered them as if it were yesterday. I felt right at home, as if we had never been apart, and I realized how much these ten little booklets meant to me and probably subconsciously influenced my own interest in publishing, design, and many visual aspects of my working life.

I really understood how much printed matter meant to me.
These days, they sit on my bookshelf. They have become a bit like an amulet, and I like to use them as a reference for my projects, or just flick through them for random inspiration when I finally manage to spend a lazy Sunday at home. If I ever have to move again, they would probably be the last one to enter a box, not because I would want to leave them behind, but because they manage to make me feel at home anywhere. 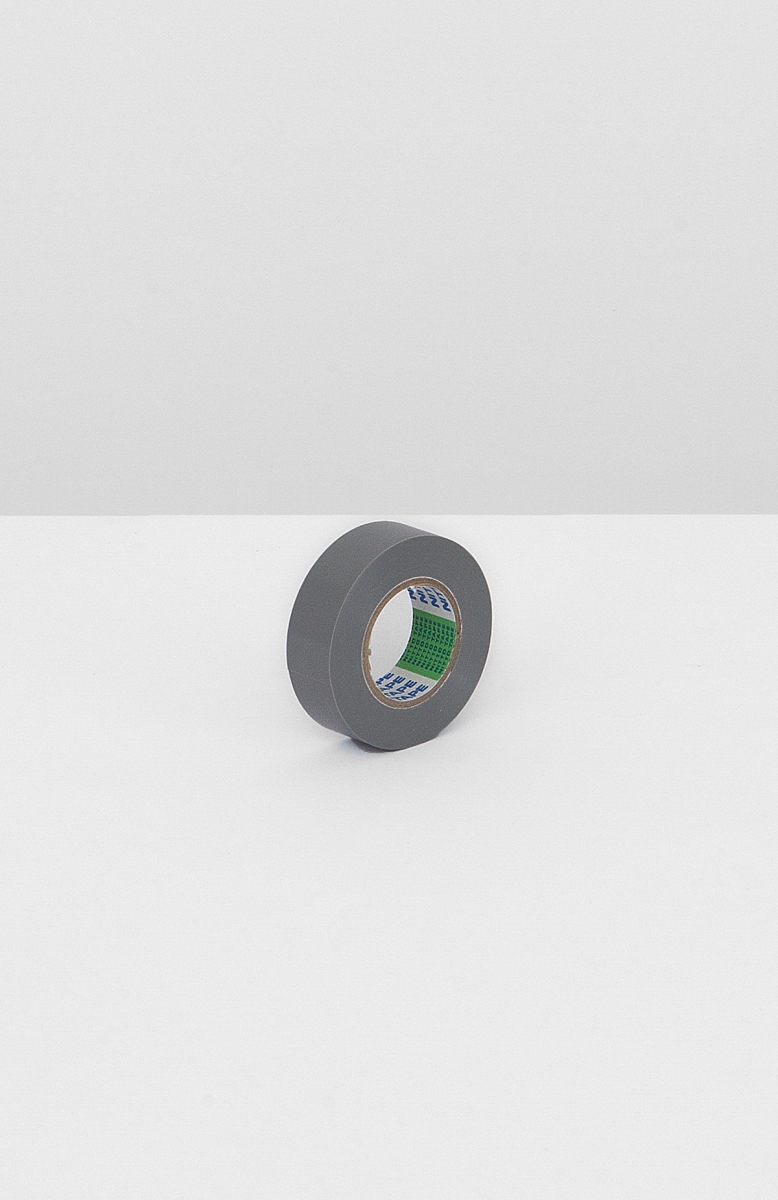