If you want to peer into the future of architecture and infrastructure, try comparing the impact of two vastly different maps of the same place. For this post, I am using a map of the United States; but you could use just about any map of any country on the planet. Map of the United […]

If you want to peer into the future of architecture and infrastructure, try comparing the impact of two vastly different maps of the same place.

For this post, I am using a map of the United States; but you could use just about any map of any country on the planet.

Map of the United States

Looking at this map, you will see what you typically think of as the United States, with the lines that divide the landmass of regions into our familiar states. These boundaries were politically inspired, and whether influenced by natural features or not, the lines don’t heed to the ecological realities on the ground or in the water.

This process of artificially delineating land with straight lines continues as you zoom further into the map— states divide into counties and then cities, towns, villages, subdivisions and even further into individual property lines. Real estate developers, engineers, designers, and architects define their project sites against such lines and from there we get houses, office buildings, restaurants, hospitals, campuses, and neighborhoods. As this process fleshes out, the ecological functionality of the place is often dismantled in an effort to accommodate the infrastructure required to “serve” the location. That’s one way of looking at a map… and so far, it seems to be the only way.

Another way of seeing the world and its land is through the lens of nature— more scientifically known as ecosystems.  Below is a map of the ecoregions throughout the United States.  Each color denotes a separate ecosystem as a product of geography, rainfall, and other factors.  Similar to the map above, zooming into a particular ecoregion will reveal smaller, more specific micro-ecosystems determined by factors such as topography and watersheds.  Within these zones are hundreds and thousands of species making up a web of biodiversity.  Millions of individual plants and animals live within these boundaries without requiring the installation of infrastructure. 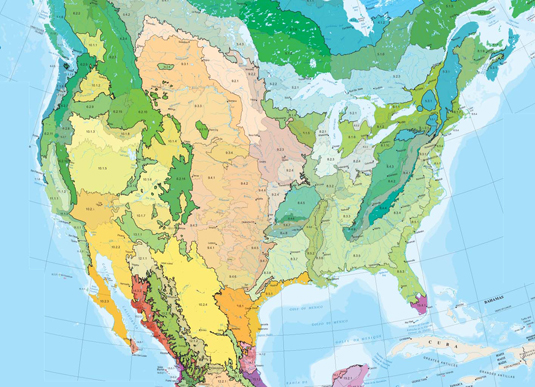 Ecoregions of the USA, Image from the EPA

Until we stop building along politically defined limits and start designing in line with ecologically determined borders, we will be doing very little to improve the condition of our society.  More importantly, we won’t be getting any closer to a more sustainable, just world. The future of green design is dependent on how well industry professionals understand and adhere to the factors that govern ecological function.  Until then, we’re “polishing the silverware as the Titanic sinks”.