Our columnist looks back at the Great War on the centennial of its outbreak. 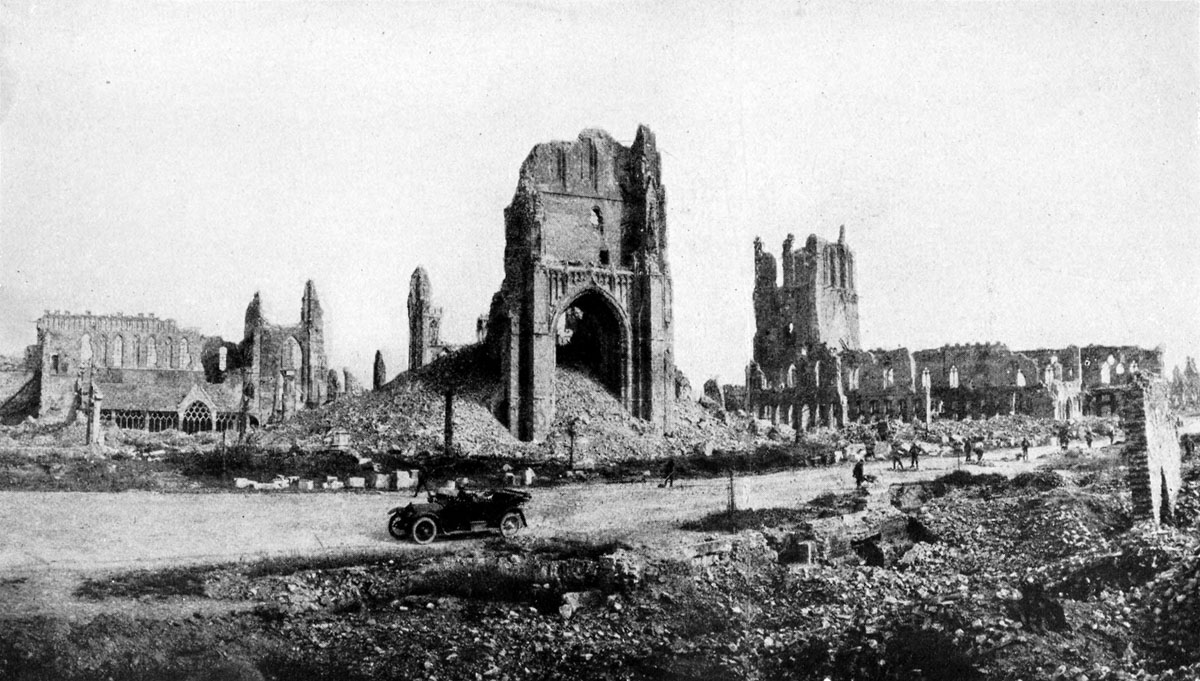 Several major World War I battles reduced the Belgian town of Ypres to rubble. After the war, St. Martin’s Cathedral (remnants, above) and Cloth Hall, both constructed in the 1300s, were rebuilt.

My son, born in 2001, looks up from his video game and asks, “Which one is World War III? Iraq or Afghanistan—or don’t we count anymore?” I can’t help him out. I am among the last children of 1914, so for me the question is the answer. The chain that broke at the beginning of World War I, and erased centuries of European history, started a new chain that feels like it may be breaking again. Design left its fingerprints here, although the Bauhaus and Modernism’s quest to create a “design to end all war” fell rather short of its goal by 1939. I have my own reasons to peer back to Western civilization’s last familiar summer before everything changed.

The Great War expunged the ornate and intimidating double-headed-eagle brand of the Habsburg Family that had stood since the Middle Ages. The great Ottoman Empire, with its own venerable trademarks posted across three continents, also vanished at the same moment. It’s a reach back to 1914 for me. My kids can’t do it. I suspect they were born, at dusk, beyond the horizon of this epoch.

I grew up with this timeline: 1914, the Roaring Twenties, the Great Depression, World War II, the Bomb, the Cold War, the end of the Cold War, and the digital present. I scribble little signposts to make sense of it. Historians will someday supply precise names. These are my Post It notes on history’s layout page: Now = “After Google”; after 1914 = “Before Google”; before 1914 = “The Land Beyond Google.” Searching for bits of history from before 1914 is already harder than finding out what Katy Perry did last week. From 1914 on, the digital archive grows; it explodes exponentially with the arrival of recorded media until now, where the searchable archive of all things that happened yesterday feels much larger than everything findable before 1914.

“My sole direct connection to the time before 1914 is a large golden pocket watch, the defining gadget of the nineteenth century.”

There are two buildings in Belgium that will be visited by millions of people from around the world this year: the Gothic cathedral of St. Martin, completed in 1370, and the adjacent Cloth Hall, completed in 1304, in the town of Ypres. They were once symbols of the mercantile prosperity of the late Middle Ages, places that managed to pull themselves into the Renaissance. Exactly 100 years ago in Ypres, one could see St. Martin’s Cathedral and the Cloth Hall much as they looked in the fourteenth century. There are searchable images from that time. World War I’s numerous battles of Ypres reduced the town to rubble. The buildings have been meticulously restored and it is anticipated that the economic boom from tourism—due to the anniversary of the Great War—might represent a handsome unexpected profit for the former medieval trading post, where fabrics were once sold to royalty more than six centuries ago.

There are not likely to be such crowds in the United States this year. Only about 10,000 out-of-the-way monuments are dedicated to World War I. There is a national memorial in Kansas City, Missouri. Most are tiny, forgotten, possibly vandalized statues and designs dedicated to service, not victory, and generally upstaged by other wars. My sole direct connection to the time before 1914 is a large golden pocket watch, the defining gadget of the nineteenth century made sometime before 1913. It is still in the possession of my aging designer father, Jack, and it belonged to my late grandfather Tom Hockenberry, who wore the uniform of the U.S. Army. During his years in the military, he repaired and tuned up dog-fighting biplanes. His hands gave life to the iconic designs of flight that survive today in stunt planes and museum pieces. At the war’s end, young Tom was positioned at the edge of a whole new world opening up, an aircraft mechanic at the beginning of a century that would be defined by machines, travel, and communication. His future looked bright.

Looking back and forth across the divide of 1914 is to chase ghosts. Art and design cast their shadows across this chasm. Wes Anderson’s recent movie The Grand Budapest Hotel is a comic taunt set in some made-up country on the eve of some unnamed war inspired by a forgotten suicidal twentieth-century author, Stefan Zweig, whose words speak to us like sumptuous forbidden ornaments of a lost time. Designers at the end of the 1800s confronted the problem of how human-controlled machines might be made to mow down horses and standing armies.

“In the unsettling global turmoil of 2014, children send random selfies to the future that lose their context the moment they’re posted.”

The answer was mechanized tanks and advanced machine guns upgraded from the American Civil War. To cope with the slaughter, designers also gave us the gas masks, body armor, and bandages that allowed soldiers to survive into a postwar world resembling little of the old. The sad, beautiful theme of Mahler’s Ninth Symphony feels like a familiar soundtrack from last week’s indie-movie hit, until you realize that Mahler died in 1911—and there it is, a melody from another age. Why does it seem to speak to us as a haunting premonition rather than as a predictable greatest hit?

My grandpa Tom spent wild, wonderful times in Europe, like so many Americans who escaped the slaughter and for whom the Great War was their first taste of the adventure of twentieth-century Europe. Tom fell in love with a woman the family to this day knows only as “F.” It is the single letter at the bottom of the inscription on the solid-gold lid of his pocket watch: “For Tom with all my love.” The inscription is barely readable today. When Tom was alive, the fastest way to get my grandmother Beatrice into a silent rage was to ask Grandpa to show the watch to us. He never mentioned “F.” He had no pictures. Our assumption was that the watch was an exchanged gift and that somewhere in France a girl wore Tom’s engagement ring.

We wish art, music, and objects could warn us of whatever is to come. We yearn to know how to avoid the path those young men stumbled down that led to the fateful guns of August 1914. In the unsettling global turmoil of 2014, children send random selfies to the future that lose their context the moment they’re posted. Instant archeology. What do we find when we look back? Do Mahler’s melancholic themes and symphonic rages constitute evidence that he had an inkling of the century to come? The stunning pictures of the St. Martin’s Cathedral at Ypres from before 1914 are tranquil and somber. The piles of rubble in the same place by 1918 are tranquil and barbaric. The restored town square today is brightly lit and full of cars and tour buses. It is not somber, barbaric, or tranquil. It shines brilliantly, like a twentieth-century theme park, or like the good wishes sent from “F” on Grandpa Tom’s gleaming gold watch. Soon we will no longer be able to read the message at all.