What you see in the video above is San Francisco-based Obscura Digital’s six solid weeks of content development, countless hours of production, and invaluable cultural awakening coming to life on the exterior surface of Sheikh Zayed Grand Mosque in Abu Dhabi. This 17-minute long show of architectural projection animations replayed every 30 minutes for 5 […]

What you see in the video above is San Francisco-based Obscura Digital’s six solid weeks of content development, countless hours of production, and invaluable cultural awakening coming to life on the exterior surface of Sheikh Zayed Grand Mosque in Abu Dhabi.

This 17-minute long show of architectural projection animations replayed every 30 minutes for 5 days starting on November 29, 2011 to mark the 40th Anniversary of the United Arab Emirates National Day. The experience brought together over 1,000 people from all over the world and from the most modest to the most extravagant backgrounds—a very appropriate tribute to the values that Sheikh Zayed built the Mosque and the UAE on.

Sheikh Zayedʼs vision for the Grand Mosque was a gathering, collaboration, and learning space for communities from all over the world. The building process for the mosque reflected this vision by bringing together materials and over 3,000 artisans from around the world–New Zealand to Iran. Now, over 20 years later, this architectural projection show tells the story through the illustrative details found within the 22,412-square-meter mosque.

Permanent floral details on the interior of the mosque. 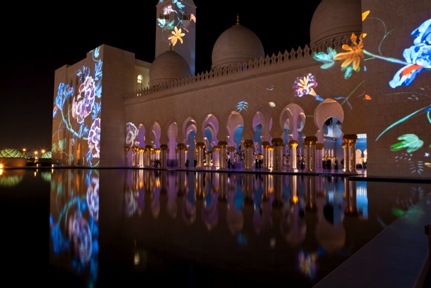 Floral details projected temporarily onto the mosque as part of 40th Anniversary celebration.

Bringing the interior details to the outside makes the private experience of being in the mosque a public one. This shift to the public environment helped celebrate the beauty and importance of the experience one has in a mosque, sharing a major part of the Islamic culture with the rest of the world. According to Obscura Digital’s creative director Marta Salas-Porras, another benefit to this architectural projection technique is the ability to a serve as non-invasive, non-permanent way of telling stories at historical and cultural sites.

The process for creating a project of this scale starts with diligent background research and an in-depth study of the mosque—mining for visual elements to help tell the story. A special cultural committee worked with Digital Obscura to help translate the message and vision behind the mosque. Then the Obscura Digital team took on the enormous task of mapping the exterior architecture—making their team the first ever to generate a laser scan of the surface area of the Grand Mosque and to create a 3-D model mapping the hand-carved details of the complex geometry of the mosque.  For a projection area 600 feet wide by 351 feet high the team mapped the façade, four minarets, and 12 domes—the most complex mapping challenge they’ve ever taken on.

The challenges didn’t peak at the scale: the art team spent countless hours animating the visual elements entirely by hand. Then a 16-person installation team working onsite to install the 44 projectors with a combined brightness of 840,000 lumens had to be extremely mindful of the physical and spiritual environment as they helped bring the project to completion.

In the end it all came together as a spectacular transformation of an already arresting feat of architecture, now with its interior details and cultural significance projected onto the exterior for the world to experience. Salas-Porras described it as a dream project with a dream client. 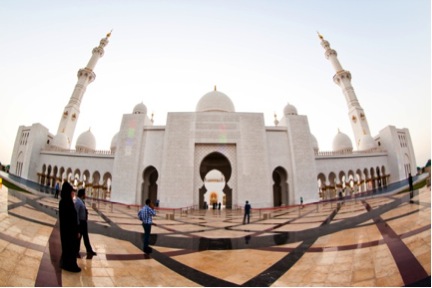 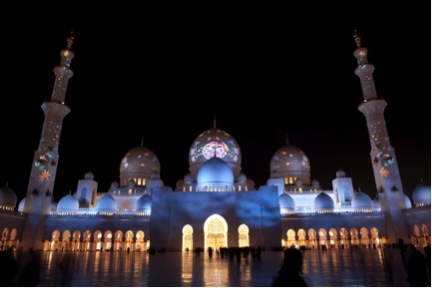 The exterior of Sheikh Zayed Grand Mosque adorned with the architectural projection.

I can’t say I’m not impressed by the scale and immersive quality of this use of such a technique—but it leads me to question what’s next? What else can we do with this technique? I pose the question to you, our readers, what is the next step for using projection and architectural mapping technology this way, what other applications can you imagine?

Obscura Digital is a San Francisco based one-stop shop for interactive and immersive experiences. You may have seen their headquarters, a space they share with IwamotoScott, featured in our June 2011 issue. Keep an eye out for some really exciting projects Obscura Digital is working on including innovations for how people will experience the Museum of Tomorrow in Rio and software solutions for working collaboratively remotely.