The best of the pack stood out by marrying beautiful design with stimulating, politically urgent content.

The theme of this year’s Venice Biennale, curated by Alejandro Aravena, was a clarion call for architects around the world: go to the front lines of architecture, report back with your findings. The results were tremendous, with architects exposing relevant, important projects happening in every corner of the globe, from the Amazon rainforest, to the coast of Nigeria, to the streets of Detroit. The following five exhibitions stood out by marrying beautiful design with thought-provoking and timely content.

Malkit Shoshan, founder of the architecture think tank FAST and curator of the Dutch pavilion, has spent the past decade researching the intersections between architecture, politics, and human rights, particularly in conflict zones. For this year’s biennale, Shoshan examined the UN’s bases around the world, which have historically taken the form of enormous, militarized compounds inside and around cities (170 to be precise), and explore how these compounds could better achieve their peace-keeping missions. After all, as Shoshan explains, every UN base should represent diplomacy, defense, and development; existing complexes give tribute to defense only.

Shoshan proposes redesigning UN bases so that these “militarized islands” can have a more symbiotic relationship with local inhabitants. These walled-off hubs typically shelter vital resources, in terms of physical assets as well as knowledge. Shoshan asks how design could encourage a sharing of such resources even after the UN has vacated the region. For example, a base could build a hospital at its periphery, where urgent medical resources could be shared with local inhabitants. Vital drainage infrastructure could similarly be shared, helping to prevent diseases that all too often leave cities unstable and vulnerable to conflict. The key, according to Shoshan, is abandoning the 20th-century mindset of fences and compounds and embracing a perspective that considers integration from the very beginning.

The stars of the Portuguese pavilion are not the two giants of urban thinking and architecture name checked in its title, but rather the urban realm itself. Four Siza-designed social housing projects—in Venice, Berlin, Porto, and the Hague—are the subjects of a series of documentaries screened at various points throughout the exhibit. Not only did the curators, Nuno Grande and Roberto Cremascoli, choose to exhibit in the unfinished, abandoned housing project Siza designed for Venice’s Giudecca district, but they also selected documentaries that give voices to the users of these housing projects, allowing them to comment on what’s good, what’s bad, and what’s changed in their homes over the years. Siza’s presence and legacy are felt, certainly, but it is a Siza in conversation with his clients, engaged in casual, intimate dialogue in which the architect and the user are on equal ground.

Reporting from the Front

In Rwanda, much-needed medical supplies are often unable to reach populations; there are simply not enough roads to reach communities in need. Redline-EPFL is an organization that hopes to launch a network of drones that could deliver such supplies to “droneports” across the country. Norman Foster, in collaboration with Foster + Partners, Ochsendorf Dejong & Block LLC, and the Block Research Group at ETH Zurich, has proposed a structure for Redline-EPFL that does not just serve as a small airport, but also a civic landmark and mixed-use space for communities across Africa. The tile vault structure presented at the biennale is a prototype, but the project shows tremendous potential. Inexpensive to build and made from locally available materials, such as non-fired soil bricks, the droneport would also encourage the employment and training of local workers in its construction. 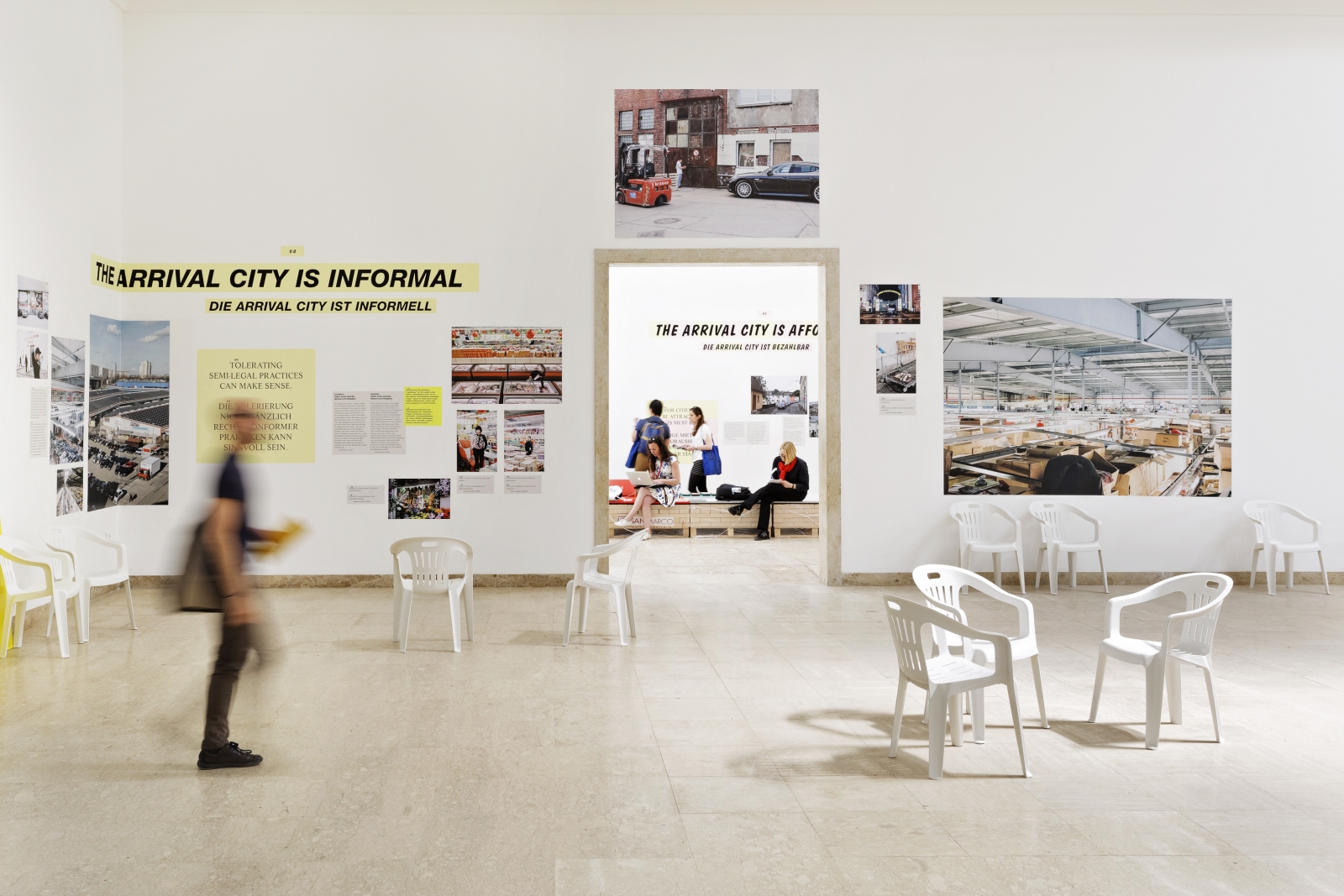 Curated by the Deutsches Architekturmuseum (DAM) in Frankfurt, the pavilion considers Germany’s newly minted class of “arrival cities” for the influx of refugees and immigrants arriving from around the world. Offering a kind of easily digestible checklist of sorts, the exhibit is divided into sections, with each section reminding the visitor what characterizes a successful arrival city while offering a few fruitful case studies for reflection. Simple and well-designed, Making Heimat is a provocative and impactful exhibit that exposes the challenges of integrating refugees into cities, but also points toward potential solutions.

The stimulating exhibit explores the future of housing and the domestic home in China, as seen through the eyes of 14 China-based architects who have been researching and working in this space over the last 18 months. Curators Beatrice Leanza, creative director of Beijing Design Week, and Michele Brunello, architect for DONTSTOP Architettura, have compiled an impressive list of participants, including MAD Architects’ Ma Yansong, Kengo Kuma, and MVRDV principal Winy Maas. Each has ingeniously tackled the issues at hand with ideas of their own—from a plan for micro-gardens that would insert toilets into the hutongs of Beijing, to the design for a Bike House that encourages a return to cycling, to a research project into the phenomena of China’s millennials, the so-called “Ant Tribes” who live packed in small apartments. Across Chinese Cities is a fascinating collection of proposals relevant not just to China, but to urban conditions around the world.